With the 'shelter in place' order in effect, the Mechanics' Institute (MI) building will be closed through at least April 7, 2020. This, of course, impacts our lives tremendously, and we are all learning to adjust to a temporary new normal. Uncertainty for many has settled in, and we are all coping to change. For many of us, chess provides an escape, allows us to engage with others in competition and sport, as well as social interaction. It has the potential to let us get a bit lost in something we enjoy and temporarily escape the challanges of our daily lives. The one thing that was most important for us at MI is that chess can continue on, not just for our club players, but for the entire chess community in the Bay Area. We see the Tuesday Night Marathon as something important in our history, and we saw an opportunity to keep the Tuesday night tradition, while keeping the chess community united and active in these sometimes isolating times.

We announced we would be experimenting with our Tuesday Night Online Mechanics' event through Chess.com, free to anyone, as a way to continue this MI tradition. We hoped we would get 30-40 players, we ended up with 118. These players were comprised not only of our club regulars (who showed up in full force), but also many players well known in the Bay Area and even some players across the country with local ties. The result was an amazing evening of chess that brought the chess community together and gave all of us three hours of action-packed entertainment. It was fun to watch the local players play each other online, and see some match ups that we would normally not get to see. When it was all over, three players finished with perfect scores of 4/4, including GM Dmitry Gordievsky, WFM Natalya Tsodikova, and Abhinav Penagalapati. Congratulations to those players, and everyone who participated to bring our community together through chess.

Full results can be found here:

Here are a couple of games from our first Tuesday Night Online, annotations by GM Nick de Firmian.

The Mechanics' Institute Chess Club defeated the Charlotte Chess Club and Scholastic Academy decisively on Thursday night 64.5-33.5 in our second club match meeting. The format of the match was 2 rounds G/15 +2, and each team member played 2 games, white/black against the same opponent. Each side had 49 players participating.

The match was won by the collective firepower of MI players, as we had a rating advantage over Charlotte due to the high turnout of our stronger club-level players. Leading the Mechanics' team were FM Josiah Stearman, NM Eric Li, NM Ruiyang Yan, NM Henry Wang, IM Elliott Winslow, and Kristian Clemens. The match was decided by our strong "middle class" corp of club players like Cailen Melville, Cesar Tamondong, Erika Malykin, Alejandro Canales, Abhinav Pebagalapati, and Theo Biyiasas just to name a few. We want to thank all our players for coming out and representing their club. It was an hour of action-packed fun!

Tune in for our next club match next Thursday, as we get take on Marshall in a rematch of a tightly contested match. For information on joining, please see the online schedule announcement in this newsletter.

To see full results of the match, please follow this link:

In 1968 San Francisco, prior to an Atlantic crossing to Europe aboard the SS United States, my father Stanley taught my brother Jay and me how to play chess. I was eight, he was seven.

His thinking was (as he later stated) that it would "Give you both something to do." Perhaps it was intended to also bring us closer together, which it did, in consequences he might have been more savvy to: we found another reason to clobber each other.

Chess was clearly a competitive endeavor, and although I don't remember if we knew how the pieces properly moved, or what check or checkmate was exactly, there was a winner, worse yet a loser, and violence simmered below the surface of the chessboard.

Nevertheless, Jay and I may have found some refuge for a time there, in chess: here is photographic evidence of us playing during this trip.  Both of us seem absorbed, and the largest ocean liner in the world, host to our game, seems nowhere in our thoughts.
So many years ago. 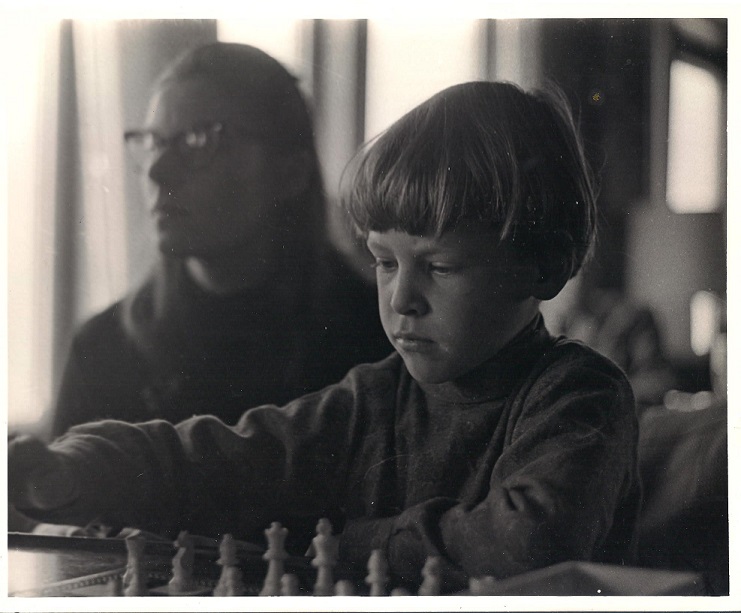 My father was fascinated by the game, but mostly on a visual level.  In Spain he bought an out-sized and marvelous replica of the famous Lewis Chessmen, which accompanied us all over Europe and finally back to the States in 1972, where it moved about with my father from studio to house to apartment, until his passing in Berkeley, in 2006.

The Lewis Chessmen, in cream white and blood red, has been lost to me as well. 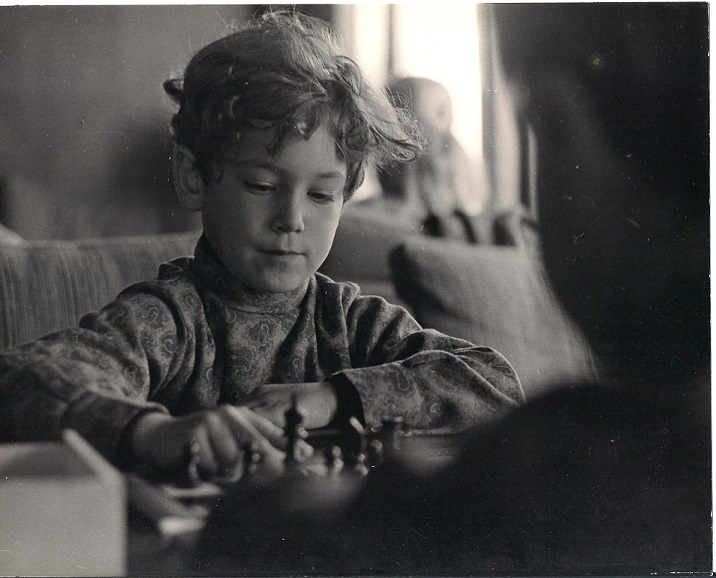 In 1972 we were still in Europe, and after much moving about my family had settled for a bit in Scotland, where my parents (civilians) taught Kindergarten and High School classes on an American base, a school my brother and I attended as well. We lived off-base, and apart from the ubiquitous Lewis Chessmen, the game of chess rarely entered my mind.  I was 12 years old, interested in soccer and books.  I loved the solitary Scottish countryside and took long walks down to the sea with the family dog.

But in the Summer all of that was to change.
I was given a choice: accompany the family to Morocco, or fly back solo to the States and spend my vacation with my maternal grandparents in upstate New York.
They lived in a small retirement community called Mountaindale, deep in the Catskills.


In choosing Mountaindale over Marrakesh, I think I made an interesting decision, like a homing pigeon choosing its target…

In 1972 the worship of Norse gods was officially approved in Iceland,
and Iceland fought England in the 2nd Cod War.

And, in the Summer of 1972, Iceland hosted the Match of the Century, where chess exploded into the public consciousness.

And exploded into mine as well.

To become World Chess Champion is a herculean task. You must battle against great players to get into the Candidates Tournament, and there you must battle against the very best in the world to gain the sole right to become the challenger. Then there is the battle with the champion him/herself. It is often wondered what is the greater difficulty – to overcome the other challengers or to win the championship match. In the time of the great Soviet players winning the Candidates Tournament was an incredible feat. There was Keres, Smyslov, Bronstein, Tal, Spassky, Petrosian, Geller, Korchnoi, and others to surpass. After reaching the match against Botvinnik one could say the hardest work had been done. Botvinnik only managed to keep his title for some time with the help of rematches and a favorable system.

The group of contenders in the current Candidates Tournament is very  impressive. Caruana and Ding Liren have been world beaters for years. Nepomniatchi and Giri have shown their great talent and Grischuk has been a serious contender for over a decade. To be champion requires incredible talent and dedication, but perhaps most important is the intense desire to compete and win. Radjabov had a place in this Candidates Tournament but withdrew due to the Corona Virus. In jumped Maxime Vachier-Lagrave (MVL), who barely had missed qualifying and was burning to play. Did he let the little issue of a pandemic bother him? Absolutely not! He is playing to become World Chess Champion. The obstacles he must overcome are even more severe than a life threatening disease. This is the right attitude of a true challenger. I count MVL as a very worthy candidate for his great fighting spirit and intense desire to win. This is similar to Lasker, Korchnoi, and Kramnik. We present now some games of MVL, starting with an epic battle against the current World Champion.

Magnus resigned as 96...f2 97. Ra1 gathers up the f-pawn and the white king dominates on the kingside. This was almost a hundred moves to beat Magnus - real determination from MVL! 1-0

1.e4 c5 2.Nf3 d6 3.d4 cxd4 4.Nxd4 Nf6 5.Nc3 a6 MVL is the current generation's Najdorf expert. He loves to play the complicated tactical positons that arise from the opening and he shows no fear of the long computer opening preparation of his opponents. 6.Bg5 e6 7.f4 h6 8.Bh4 Qb6 Diagram

This accurately timed aggression in the center allows Black to take the initiative. 17.exd5 Ne5 18.Qh3 exd5 19.Re1 Kf8 A Najdorf player must get used to having his/her king in the center. Black's initiative is more than compensation for this. 20.Nf5 Bxf5 21.gxf5 Bc5! White will be left with critical black squared weakenesses if he trades these bishops. Black has taken full control of the game. 22.Qf1 d4 23.Nb1 Ne4 24.Bf3?! [24.Bd1 would hold out longer] 24...Nxf2 25.Bxa8 Diagram

In the midst of this corona virus 2019 (COVID-19), we chess players have the one high-profile sporting event left in the world. No basketball, baseball, football or soccer to entertain you, but a high-stakes, bitterly-fought battle to become the one challenger. The players appear to be totally immersed in the tournament, with their nerves on edge for the seriousness of the event. So I suggest that you simply enjoy this event and put your worries aside for a while!

The first round began with surprising loses from two of the three most solid players in the world. Anish Giri went down with the white pieces against Ian Nepomniatchi and Ding Liren lost (also with White) against his countryman Wang Hao. (I must note that Paul Whitehead predicted a good result from the under-appreciated Wang Hao.)

Grischuk has drawn three favorable positions, but the game that has kept the tournament close was the third round matchup between the pre-tournament favorites Fabiano Caruana and Ding Liren. Ding was reeling after losing the first two games and a loss to Caruana may have ruined his chances. Fabiano went for the knock-out punch with an early pawn sacrifice, but this was like hunting a wounded tiger. I would have suggested to tread carefully with and give Ding his proper respect. A draw would have left Fabiano well ahead of his rival and not put him behind on the first tie-break (head to head).

What a move from Cauana! Sacrificing a pawn with Black early in the opening. This is clearly his preparation and thus backed up with heavy computer analysis. Yet it is a risky move where Black must play with great energy to justify to loss of the pawn. That is fine if you are feeling like Tal, but you must play with great energy. 10.Nxe5 Bc2 11.Qd2! c5 12.d5 Bb3 13.e4 Re8 14.Qf4 c4 sacrificing a second pawn to open lines against the white king. Fabi is putting pressure on Ding, yet he is up to the task. Just because Ding lost his first two games doesn't mean he isn't a great defender. 15.Nxc4 Nbd7 16.Be3 Nf8 17.Bd4 Ng6 18.Qf5 Bxc4 19.Bxc4 Qc7 20.Be2 Bc5 21.Bxc5 Diagram