The final two rounds of the February 2021 Tuesday Night Marathon saw Grandmaster battles that highlighted the precision and technique that make them a cut above all other chess players. GM Gadir Guseinov, no stranger to coming out on top of the TNM, showed his class in this TNM, as he had to defeat FM Kyron Griffith and GM Jim Tarjan en route to taking sole 1st place with 5.5/6. His game with Griffith was sharp, and he was a bit on the defensive, but a misstep by Kyron let Gadir improve his position and come back for the win. His own over Tarjan in the final round received compliments from Tarjan himself, as he congratulated Gadir's strong technical play in even looking positions. Gadir was able to take first by virtue of Tarjan and Lenderman drawing in theri round 5 game, giving Gadir the half point edge in the final standings.

In the u/1800 section, Sebby Suarez had a rough final two rounds after 4 perfect rounds, saving a draw in round 5, but losing to Aaron Nicoski, allowing Nicoski to leapfrog over him to a tie for first place with 5/6 along with Michael Jannetta.

It was an exciting ending to the tournament, and the stream was rewarded with bonus coverage at the end. As we were waiting to Chief TD Judit Sztaray to upload the final results, a game popped up on the broadcast. Since I follow the players on Chess.com to view their games, games in progress just pop up for viewing. All of a sudden, viewers of the broadcast got treated to a G?3+2 game between GM Gadir Guseinov and GM Daniel Naroditsky! It had all the action you would expect, with Gadir getting down to a won endgame, only to lose on time with each player having seconds left. You can view that game, as well as the rest of the broadcast by following this link: https://www.youtube.com/watch?v=L8TAq_Ye3S0

Here are some games from the championship round, annotated by GM Nick de Firmian.

Final standings are here. Congratulations to all the participants and to the winners!

We began the first of our new monthly blitz championship last Saturday night, with most of the registrants joining just houra before it was to start. Though we had 23 players, it was very top heavy, as GM Aleksandr Lenderman, FM Jason Liang, FM Eric Li, FM Kyron Griffith, and NM Mike Sailer were among the participants. Time control was G/5+2 and 8 rounds, and GM Aleksandr Lenderman was the winner with 7.5/8. Fortune and skill were definitely on Lenderman's side, as he escaped near defeat at the hands of FM Eric Li to turn things around and win. He also saved a draw against FM Jason Liang, where he was worse for most of the game, taking advantage of Liang's time pressure.

Here are the games, annotated by GM Nick de Firmian.

Watch the stream of the February Blitz Championship here: https://www.youtube.com/watch?v=Dfscz-reAKE

Here are the current standings after round 1: 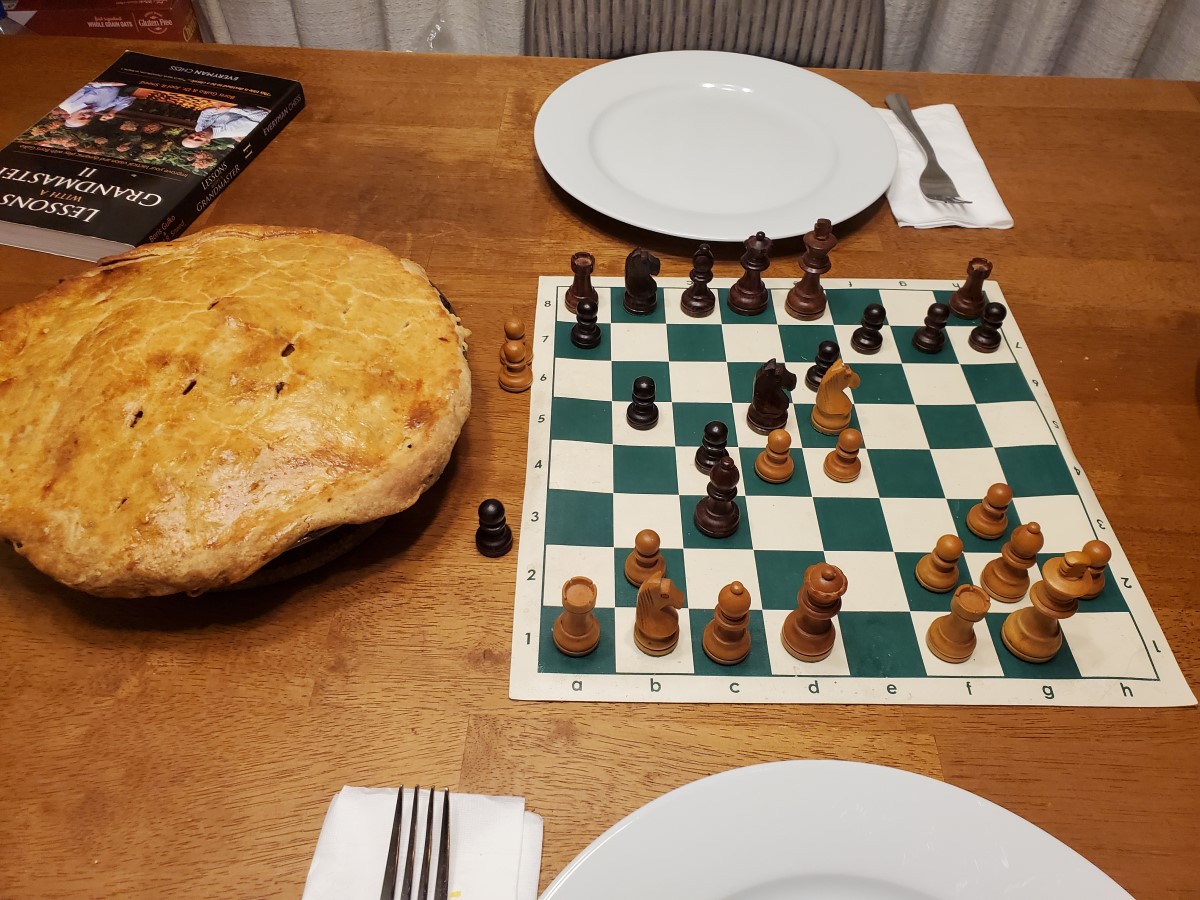 NM Mike Walder has written his first installment of Grandmaster Chef for Chessbase, caarying on the series started by WIM Alexey Root. In it he writes about GM Boris Gulko and his favorite dish. To read about what it is as well as the recipe, click on this link: https://en.chessbase.com/post/grandmaster-chef-boris-gulko

Join us Wednesday, March 3rd at 6PM Pacific Time to hear a brief presentation about the upcoming 2021 San Francisco Scholastic Online Championship, a free event for any K-12 player. Have an opportunity to ask any questions regarding the event, sections, platforms and fair play.

You'll also have an opportunity to share any feedback about online scholastic chess, online rated chess, and engage in a community discussion about what our scholastic players need, and how to move forward towards a common goal.

Join Mechanics' Institute Chessroom Director Abel Talamantez, who have been leading Mechanics' Institute and Dr. Judit Sztaray, member of the USCF Scholastic Council and part of the USCF Online Play Task Force, that developed the USCF Chapter 10 rules for Online chess. We have been organizing online rated events on the state and national level for almost a year and we would love to share our experience in answering any questions.

We hope that this townhall and the 2021 San Francisco Scholastic Championship will serve as an opportunity to celebrate the power of chess in bringing communities together.
More information with tentative rough agenda: https://www.milibrary.org/chess-tournaments/scholastic-chess-town-hall
Register: https://www.milibrary.org/chess-tournaments/scholastic-chess-town-hall

Continuing the tradition and a Mechanis' Institute heritage event: the annual San Francisco Scholastic Championship goes online this spring again to gather scholastic players from the Bay Area and beyond. Join us online for this FREE Event, where players can choose to play in a non-USCF rated section based on their grades, or compete in the Championship sections based on their rating and have their games USCF online rated.
Chess Director, Abel Talamantez, and GM Nick de Firmian and FM Paul Whitehead will be covering the event live on our twitch channel! 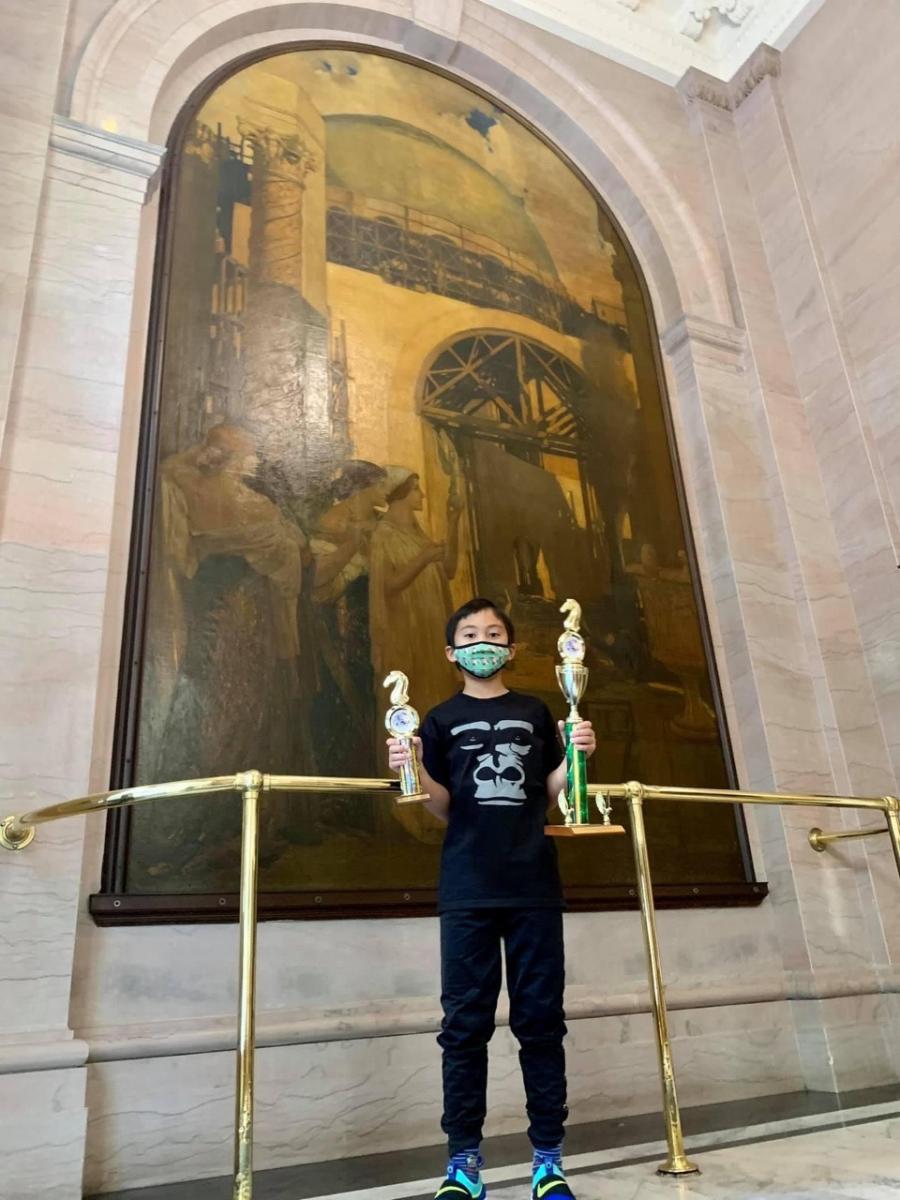 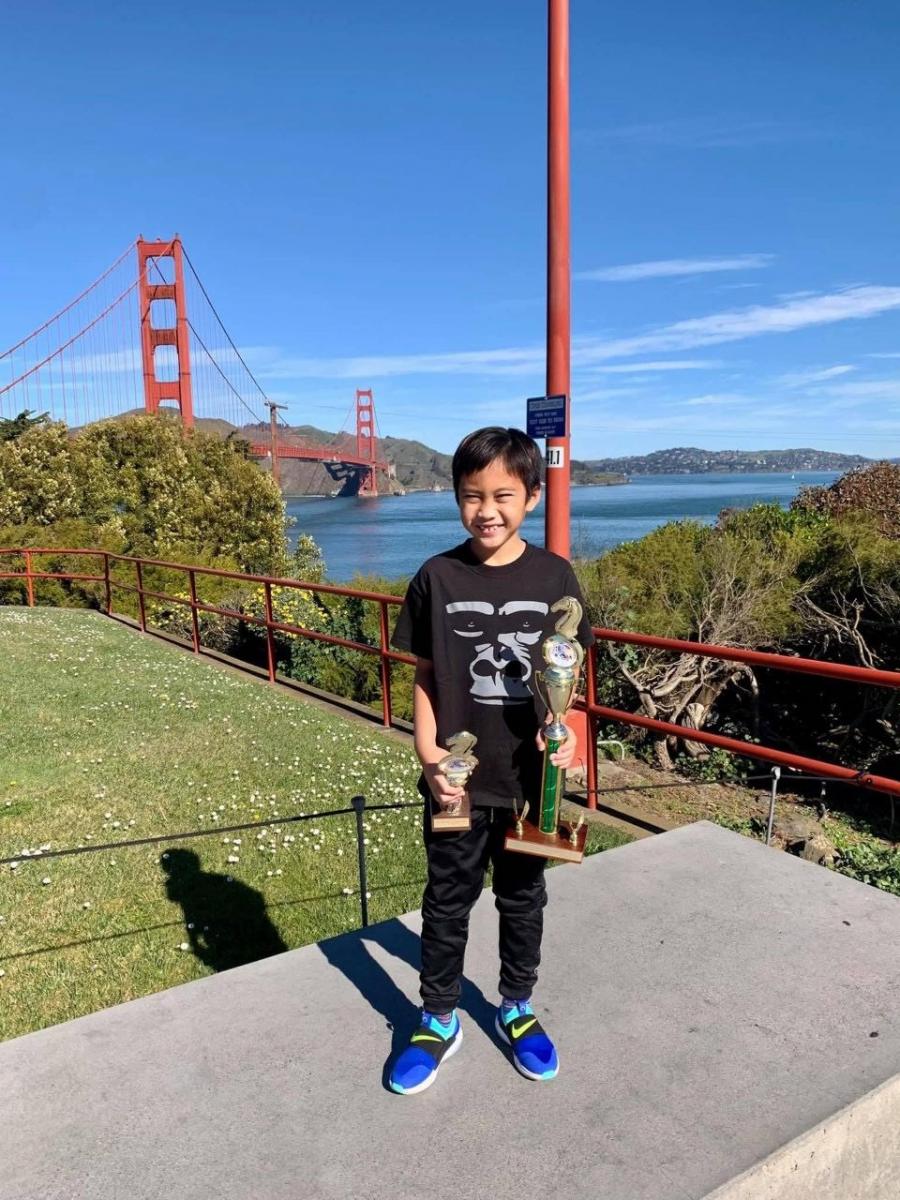 Please meet Dallas Pak from Sourthern California, one of our newest member of the Mechanics' Institute scholastic community.
On a family road trip last August, his iPad lost its battery.   As chess was the only game available to him on his father's cellphone, Dallas was introduced to chess on the drive home and immediately enjoyed playing.
Dallas and his parents found Mechanics' offerings online, and joined the weekend online tournament early January. His enthusiasm shines through and he earned two trophies during his first two tournaments! We held off mailing his medals, because they were set to visit Northern California and planned on picking up the trophies in person.
During their recent visit to San Francisco, Dallas enjoyed getting to see the Mechanics’ Institute in person. Reviewing the history of the Mechanics’ Institute, the family felt honored to be able to walk through the building during this pandemic. He relayed to us that he hopes that being featured will inspire other children and encourage them to learn and play chess.
Congratulations Dallas, keep up the good work!

The match with Isidor Gunsberg, held at the Manhattan Chess Club, proved to be a tough test for Steinitz.  He suffered from a nasty cold in the earlier stages, and with characteristic stubbornness kept to a dubious opening or two.

Gunsberg was a worthy opponent, however.  He had drawn Chigoran a match in Havana, and had defeated both Bird and Blackburne in matches as well.

Yet the final score of +6 -4 =9 in Steinitz’s favor seems about right.

Steinitz was the “Father of Modern Chess” after all, and his challenger had confessed his own play lacked maturity.

Isidor had his moments, though, as you can see from the examples below. 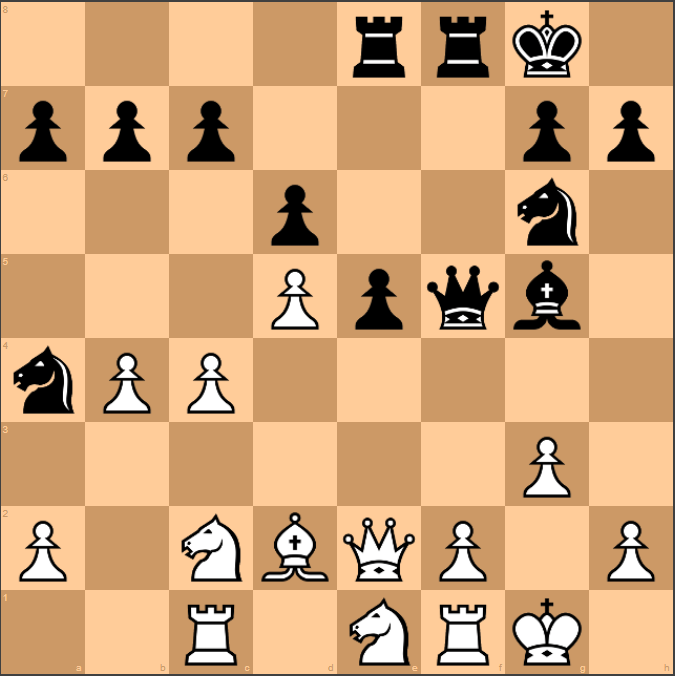 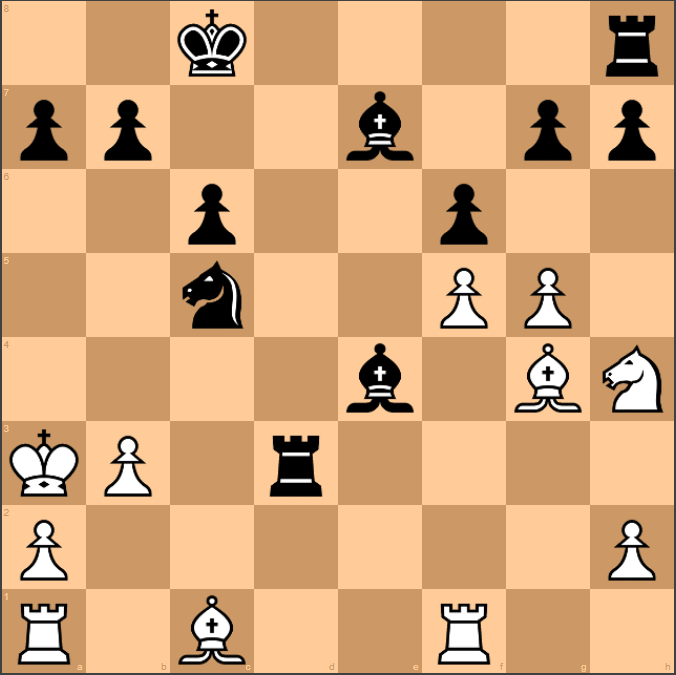 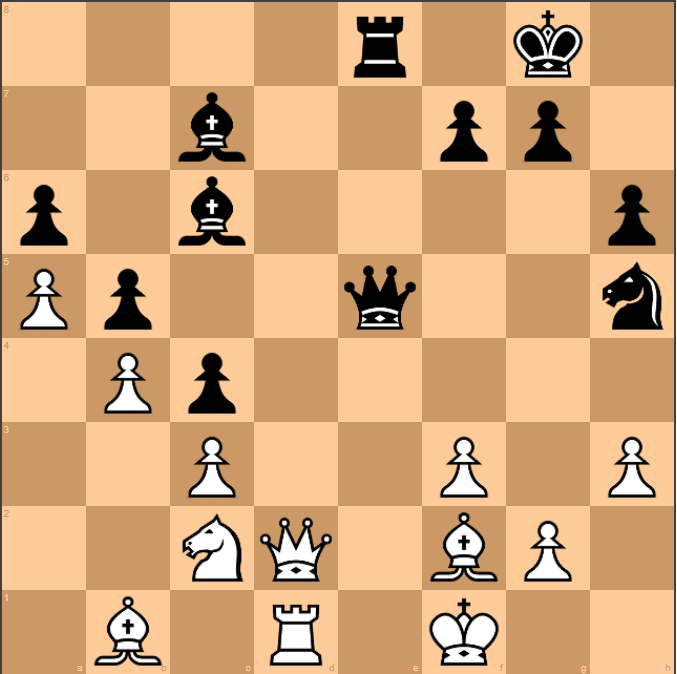 Black moves.  Blow away the defenses. 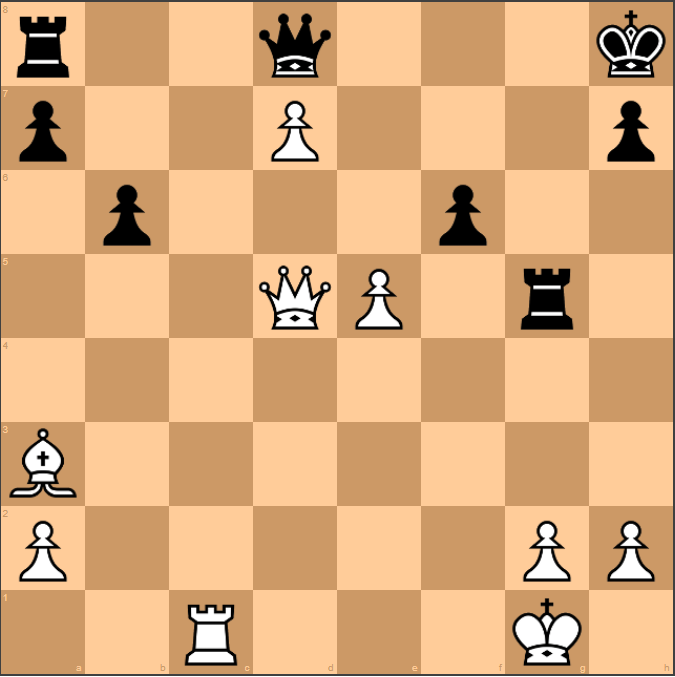 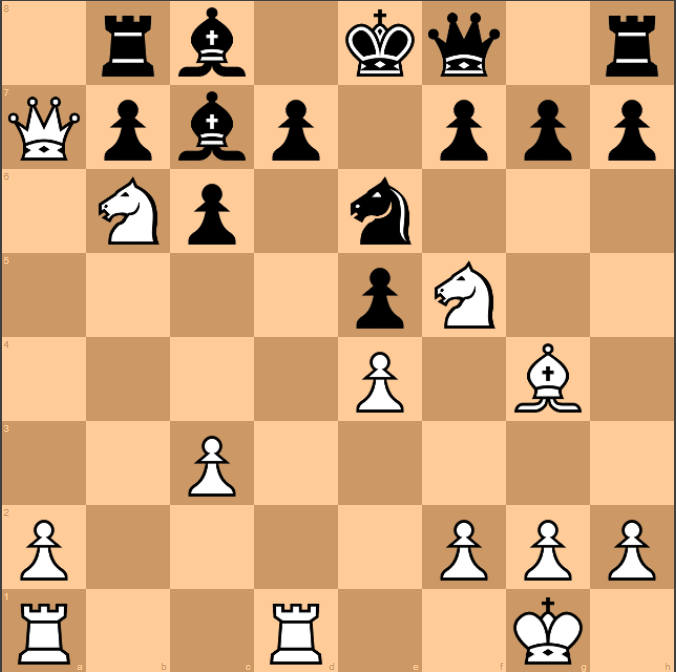 White moves.  Put black out of his misery. 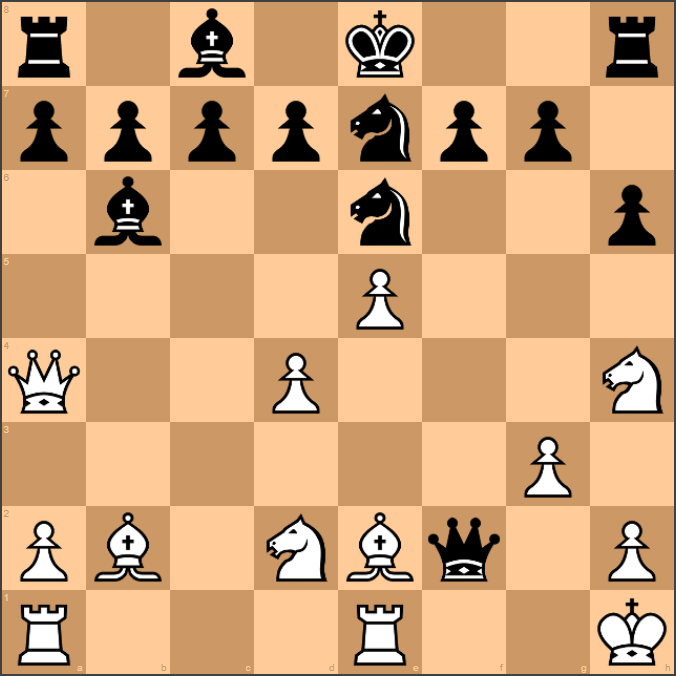 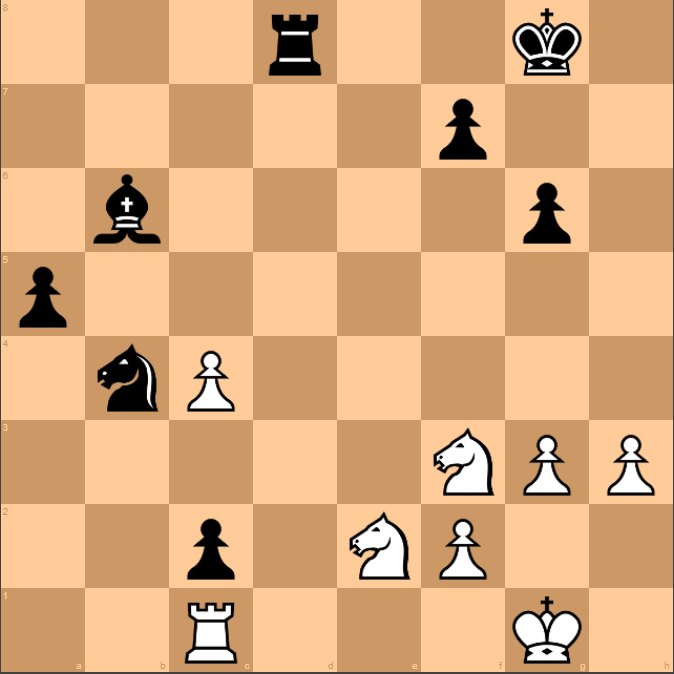 Three-time US Champion Larry Christiansen is well known for his aggressive attacking style. His books “Storming the Barricades” and “Rocking the Ramparts” are classics showing virtuoso performances of attacking chess. He is also known for his amazing and surprising tactics, where he finds inventive sequences of variations that others couldn’t dream of.

There is no better time to find shocking tactics than when you are lost and desperately in need of a game changer. This should be something any chess player tries to do, but in practice there are few who can do this with any routine expectation. The great Mikhail Tal was one of those players and America’s Larry Christiansen is another. I think the main ingredient needed (besides oodles of talent) is the belief that if you look hard enough you will find something undiscovered that lies hidden. The strange idea waits for you to show it to the rest of the world if you really search (and you will also win your chess game). May these two examples below from Christiansen inspire you to the art of swindling.

Beliavsky sees he can prevent the perpetual check and finally goes wrong. He could have won by 38. Rh7+, but he didn't envision that Christianen had also another diabolical swindling plan. 38...Rh2+!! And here a draw was agreed. Beliavsky saw there will be a stalemate after 39. Kxh2 Rg2+ 40. Kg1 Rg1+! 41. Rxg1. Another great escape from Houdini Christiansen. 1/2-1/2