We announced last week our Spring/Summer series of club matches against some of the world's historic chess clubs, starting with our May 1, 2021 match against Zurich Chess Club. We our happy to announce our 2nd match date, which will take place Saturday, May 8 against the Royal Dutch Chess Society "Discendo Discimus" from The Hague Netherlands. Founded in 1852, it is one of the oldest continually-running clubs in the world, just two years ahead of the Mechanics' Institute. We will have more details in the coming weeks, but all our club international matches will be streamed live. We look forward to bringing our communities together through chess and connecting some of history's great chess clubs through sport. Stay tuned!

The Mechanics' Institute is set to co-organize its largest scholastic event ever!
Along with Chess Weekend based in Chicago, we are proud to bring you the 2021 US Junior Chess Congress, a USCF national championship event. Sections are based on age level, and has both an individual and team component, so players can compete for both prizes. As of this writing, we have over 700 players registered! If you are a scholastic playerand interested in participating in this national event, join us next weekend by registering here: https://www.kingregistration.com/entrylist/USJCC2021

The event will be organized and run by STD/FA Dr. Judit Sztaray, NTD/FA Glenn Panner and NTD/NA Maret Thorpe. We will have a star studded cast of assistant TD's helping throughout the weekend, monitoring Zoom rooms, Slack channels, and helping with customer service. Click below for more information, we look forward to a fun filled weekend for scholastic chess April 10-11!

The Tuesday Night Marathon concluded this week with rounds 7 and 8, and the final round produced perhaps one of the more dramatic games we have had in our online marathon series. GM Gadir Guseinov, who has led the TNM wire to wire, defeated IM Elliott Winslow in round 7 but took a quick draw with NM Michael Walder in round 8. Guseinov was preparing for a European match, and only IM Brian Escalante could catch him to tie for first, but he would have to defeat FM Max "the axe" Gedajlovic in the final round, and Max had been looking in great form, drawing GM Jim Tarjan in round 7 in a game where he was better for most of it. The round 8 game between Escalante and Gedajlovic went back and forth, a sharp complicated game that was both exciting and gripping given what was at stake. A win by Gedajlovic would give him sole 2nd place, a win by Escalante would give him a tie for 1st with Guseinov. As the clock was ticking down, it seemed Gedajlovic had seized the initiative and achieved a winning position, only to have it suddenly turn around in time pressure, where he walked into a forced mate. It was a thrilling conclusion to the March TNM, where two new players to our event provided an action packed finale.

Full results are here, congratulations to the winners and thank you to all the players!

To watch the stream of the final two rounds, please click here: https://www.youtube.com/watch?v=WqFn8mNrRN4

The Mechanics' Institute April Thursday Night Marathon started with a record 45 players for the longer time control version of our marathons, with FM Kyron Griffith making his ThNM debut. There is still time to join for round 2 next week, if you woud like to register, please click HERE. Full tournament information can be found by clicking INFO.

Here are the standings after the first round: 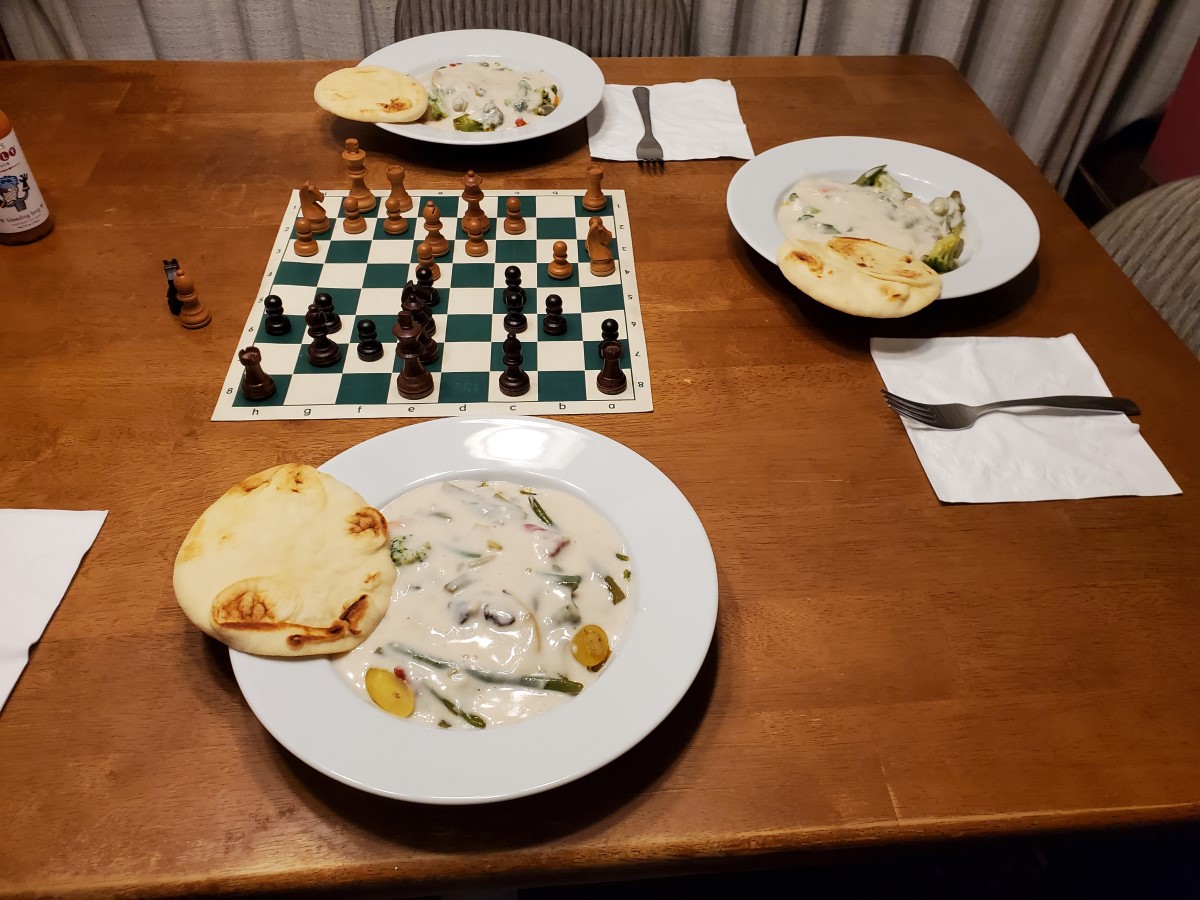 Our very own Mike Walder has written the next installment of Grandmaster Chef for Chessbase, focusing on a dish favored by former world champion GM Valdimir Kramnik. Want to learn how to make the dish in the picture? This is something Kramnik feasted on, and you can also. Click here to read the article, from our very own National Master Chef Mike Walder! https://en.chessbase.com/post/grandmaster-chef-vladimir-kramnik

Second week - Apr 5 - Apr 9 9AM - 12PM
Sign your child up for some fun virtual chess camp during their spring break!
Monday through Friday,
Register: https://mechanics-institute.jumbula.com/2021OnlineClasses/SpringBreakChessCamp

trickly but this should lose a piece. Retreating the knight on h4 would save it. The critical point of the game has been reached. White has moved the pieces out for the kill, but there are many black pieces that can defend. Consider this position a puzzle - what should Black play? 14...f4?? oh no! [14...Be8! 15.Qg5 f4! would win a piece for Black] 15.Ng6#! KindMagneticFist won by checkmate 1-0

“I have only three words for Lasker: check, check, and mate!”

So said that incurable optimist, the Prussian-born Siegbert Tarrasch on the eve of the 1908 World Championship match.  However, like so many of Lasker’s opponents, his hopes were dashed in decisive fashion, and the final tally ended heavily in Lasker’s favor +8 -3 =5.  In the 16th and final game, Tarrasch woozily dropped a piece, compounding a rather error-prone match performance overall: 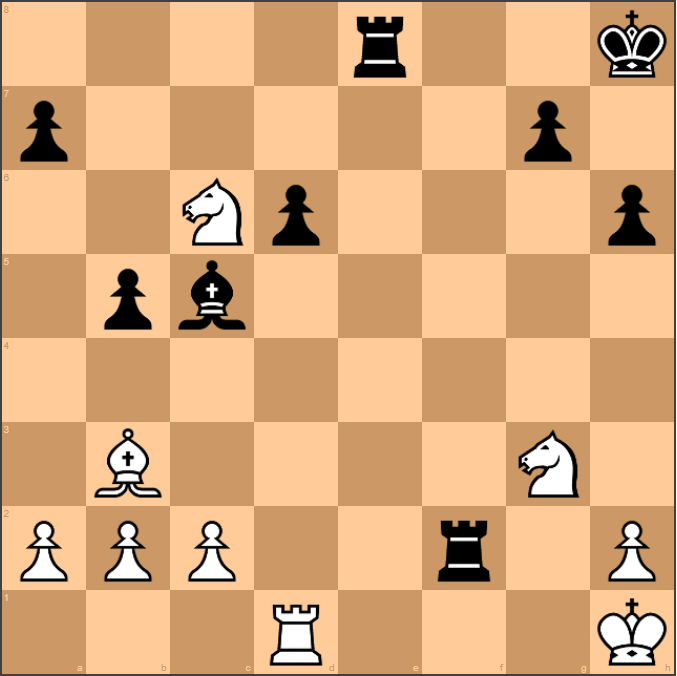 In this unbalanced position with chances for both sides, white brought his knight ‘back into play’ with 1.Nd4?? but had to resign after 1...Bxd4, as 2.Rxd4 allows the back-rank penetration with 2…Re1+ and mate next move. 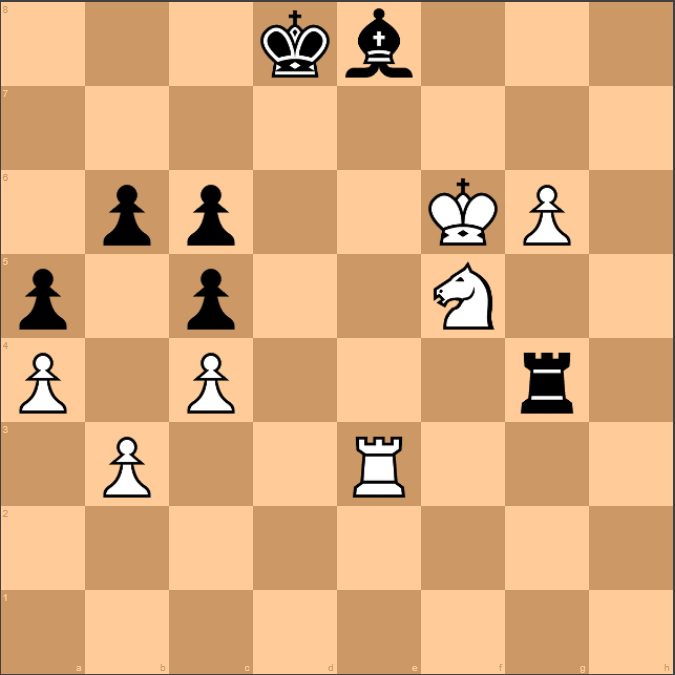 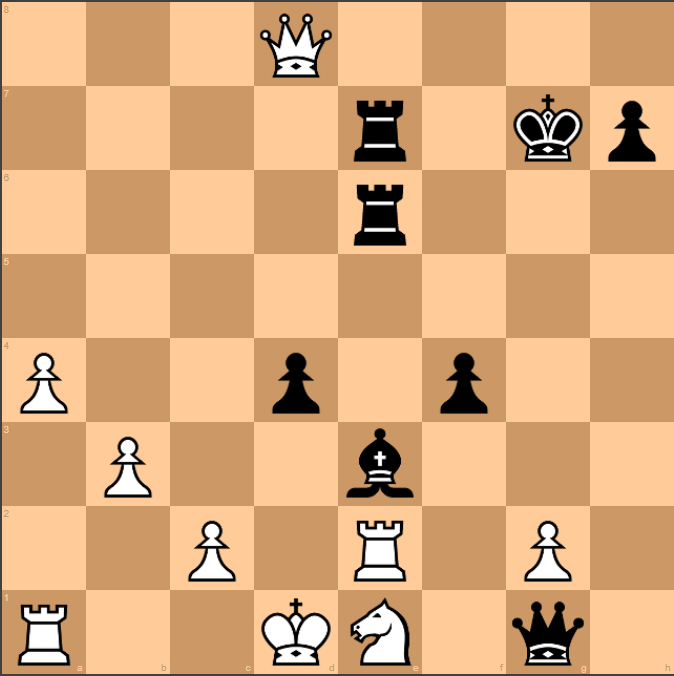 Black moves.  How to break-through? 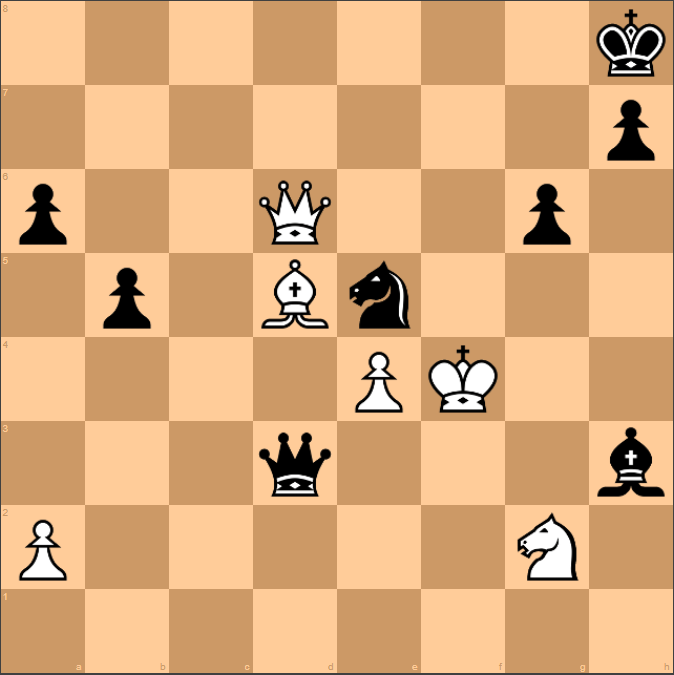 Black moves.  Tarrasch cashes in on his pre-match boast. 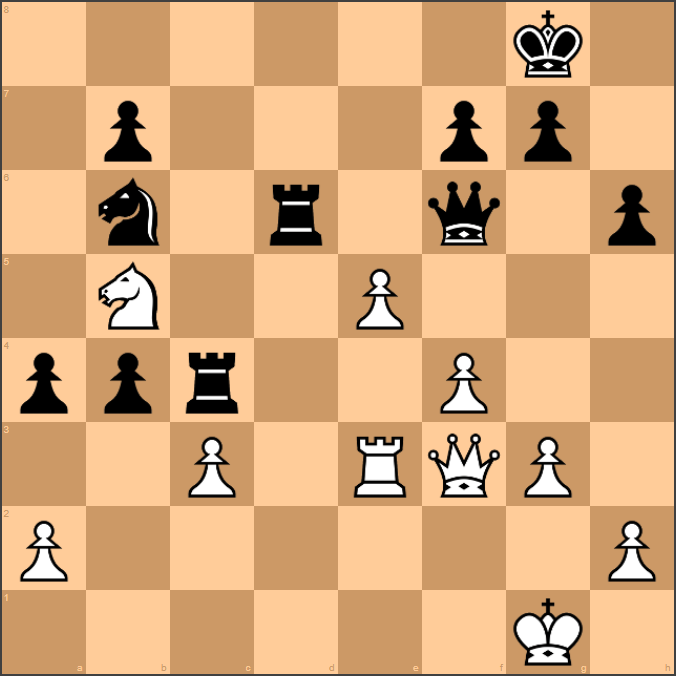 Black moves.  Tarrasch plans to recover his rook with a large positional advantage.  However… 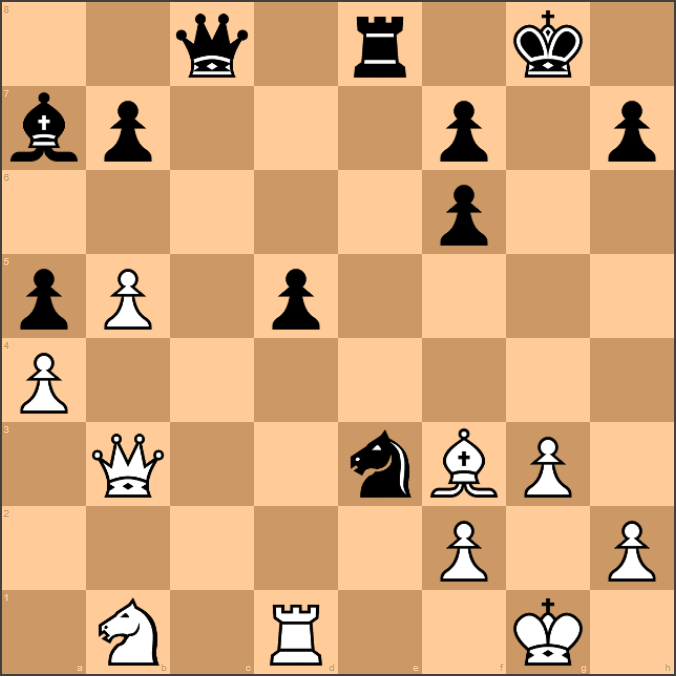 White moves.  Be careful, yet resolute.

There are some opponents you like to play against and often you have a very good score against them. Other opponents may be difficult to play against and you tend to lose, even though they are not at all better at chess than you (sometimes clearly worse). This can be because your styles match up oddly (e.g. your aggression blunted by their natural defensive tendency) or that the openings that you both play aren’t quite in your favor. It can also be simply a streak of bad luck. After a few loses though against such an opponent you may feel psychological difficulty when you meet them over the board. This can compound the problem when you feel obliged to be too aggressive or too timid and not play what the position dictates.

You may think that the great players are immune to this, but even they tend to have a “bete noire” who makes their life difficult over the board. Magnus Carlsen has dominated chess this last decade, yet against Ian Nepomniachtchi he has a losing score of 4-1 in classical chess. Of course this may not count as much since this score starts with their first game 19 years ago when they were both boys in the European Under 12 championship. Nepo is the one player in the world who seems truly to have no fear at all against Carlsen, and always plays his active aggressive moves just as if the World Champ was anybody else. As Nepomiachtchi is the favorite in the Candidates Tournament (resuming in two weeks after a year’s break) we may well see a World Championship match between these two. We give two examples below of that battle that may come.

What to do when you are facing your “bete noire” again? I can only offer you (and Magnus) the example of Bobby Fischer. Fischer started with a terrible score against some of the great Soviet players – 0-4 against Mikhail Tal, losses against Geller, Spassky and others. Yet Fischer remained true to his style and simply improved his game. When years later Geller (with White) offered him an early draw in the interzonal, Fischer just laughed and ground him down in a long ending. The scores also turned around against Tal and Spassky and the rest was history.

1…g5+! was the final bow in this wonderful king-hunt. White opted for losing his queen to a knight-fork, and resigned after 2.Kxg5 Nf7+.  His only other option was 2.Kxe5, when 2…Qc3! is checkmate!