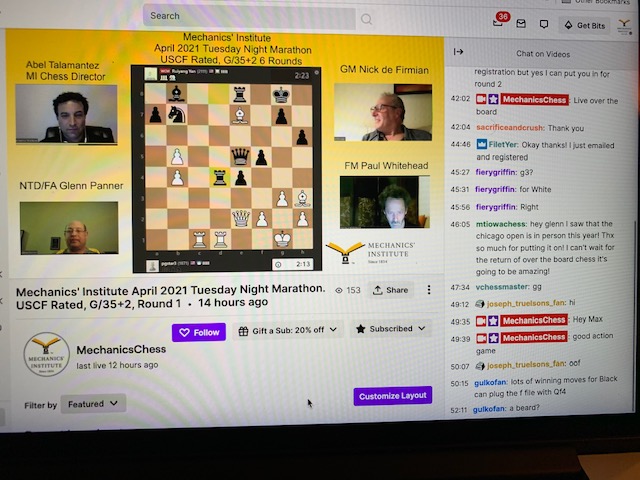 The April 2021 TNM completed rounds 1 and 2 this past Tuesday, and if you watched it, you got to see a great show. There were many exciting games to follow, but definitely the game of the round was between Jonah Busch and IM Josiah Stearman in round 2. Stearman is well known for his inclination for very aggressive play, and quite often produces some of the most exciting games. As a consequence, his looseness with the pieces can get him into some trouble, and it did so on Tuesday against a very solid and patient player. In a completely lost position, Stearman played on, patiently waiting to create chaos and opportunities, like a wolf patiently waiting in the night to pounce on its prey. Jonah fell into time pressure, and Stearman continued to press, and then the opportunity came in a stunning tactical shot that seemd to turn the tide, though later analysis showed the position could still be held. But in serious time trouble against a top master would be too much and Stearman pulled out the win. The moments were captured on the broadcast, and was certainly must see TV.

In honor of this epic game and the drama that played out, Lex Huberts was inspired to produce this poem:

Josiah lashes out, willing white’s King on his tush.

But Jonah judiciously refutes the ‘amBusch’.

The attacker’s strength and initiative dwindle,

A loss in the books, the game still a gem.

Only heart-broken till Tuesday, when we try again.

No doubt one of the exciting parts about watching events like the TNM on the stream is the ability to watch in real time underdogs get their shot at glory. As most of us reading are underdogs relative to the top players, we know the feeling of excitement and disappointment all too well. But the underdogs always come back to fight another day, improving their game, and waiting for another opportunity to produce the game of their lives. Even these losses inspire memoroes and stories that live on for the underdogs and favorites alike, and the poem captures that feeling very well.

The coverage of this match and the feeling of the opportunity of a major upset was caught here starting at the 1:30:00 mark: https://www.twitch.tv/videos/986752163

In another exciting game in the top section, IM Brian Escalante and NM Michael Wang played to a draw, and Chelsea Zhou took advantage of a time pressure blunder ny IM Elliott Winslow to score the upset of the round. Top seed GM Gadir Guseinov rolled through his forst two games to also stay perfect, and NM Ruiyang Yan's counter punch style of play came through for her in remaining perfect after 2 rounds.

In the under 1800 section, Mechanics' veteran Sos Hakobyan (SacrificeAndCrush) is among the perfect scores, along with Sebby Suarez, Rajtilak Jagannathan, Michael Xiao, Aryan Renjith, and Ivan Zong. It is exciting for us to see many new names participating in the TNM, particularly in the bottom section. We always welcome new players to take part in our flagship event.

Here are some games from the first two rounds, annotated by GM Nick de Firmian.

To watch the broadcast from Tuesday night, follow this link: https://www.youtube.com/watch?v=98ixTzV-em8

Three rounds of 5 are complete in the April 2021 Thursday Night Marathon, and 4 players remain with perfect scores, including GM Gadir Guseinov, IM Elliott Winslow, NM Michael Walder, and Adam Mercado. There are some strong players right behind at 2.5 inclusing FM Kyron Griffith, FM Richar Koepcke, Kristian Clemens and Cailen Melville. Here are the current standings as we head into round 4 next week.

Lasker’s next title defense was against the Polish born David Janowski, now a Frenchman and a strong player with a wealthy patron, Leo Nardus.  Lasker had already played two exhibition matches with his challenger: the first held in early 1909 drawn at +2 -2 =0, and the second later that year won by Lasker +7 -1 = 2.  Now the optimistic challenger had another shot – third time lucky?  Janowski had great confidence in his play, and had said of the World Champion: "Lasker's game was not chess, but dominoes."  But it was not to be.  With a large purse in hand donated by Nardus, Lasker crushed Janowski in a one-sided brawl +8 -0 =3.

Lasker’s play was a bit shaky sometimes, and he extricated himself out of some lost positions.  Perhaps he was ‘playing down’ to his opponent’s skill level.  Nevertheless, it was often Janowski himself who overreached, and in the very first game made an atrocious blunder: 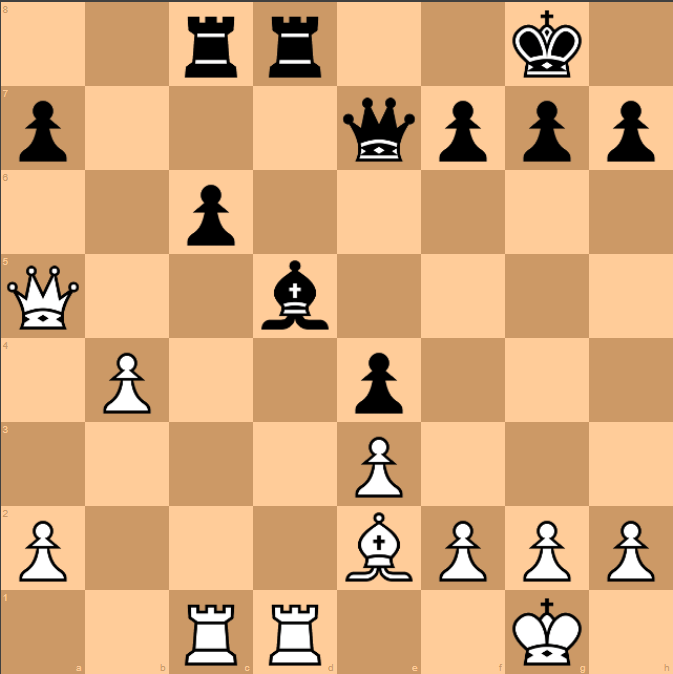 Black played 1…Rd6?? and the vulnerability of the back rank was clearly felt after the simple 2.Rxd5 Rxd5 3.Qxd5! Janowski played one more move 3…Qxb4 and resigned after 4.Rxc6 1-0.

Not an auspicious start! 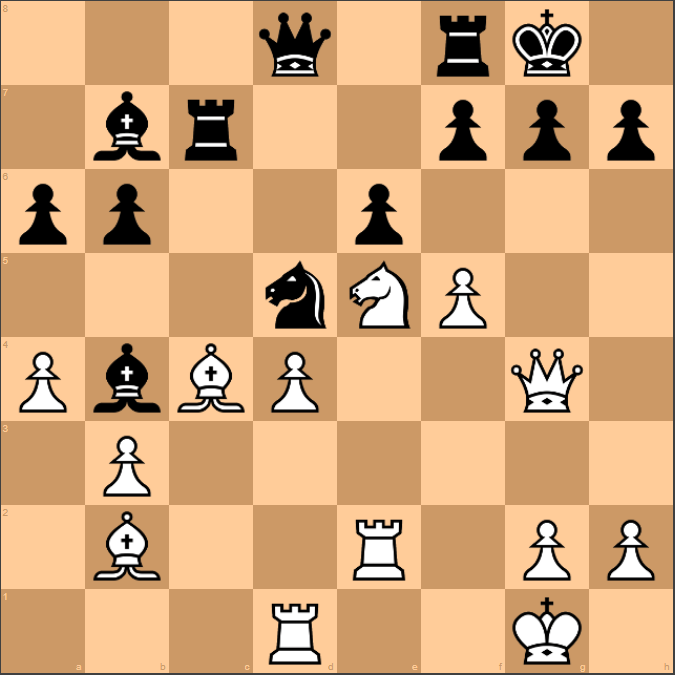 Black moves.  How did Lasker deal with the looming kingside threats? 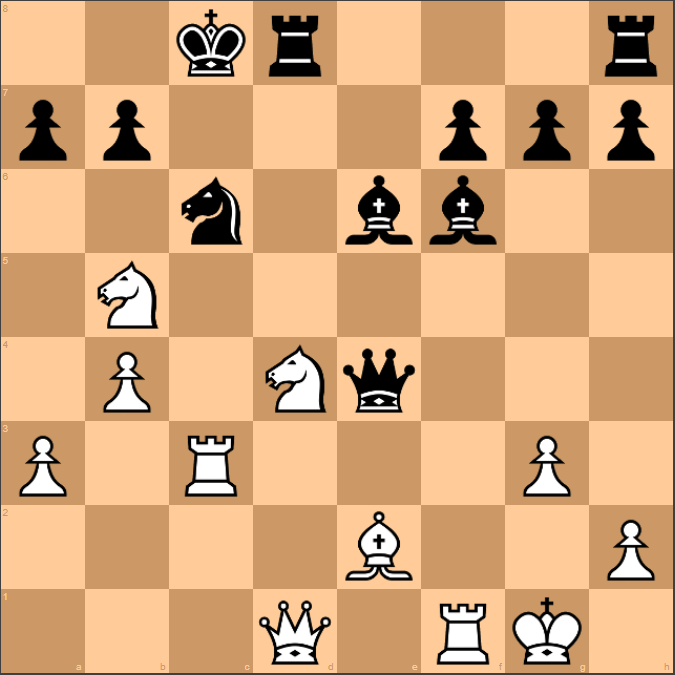 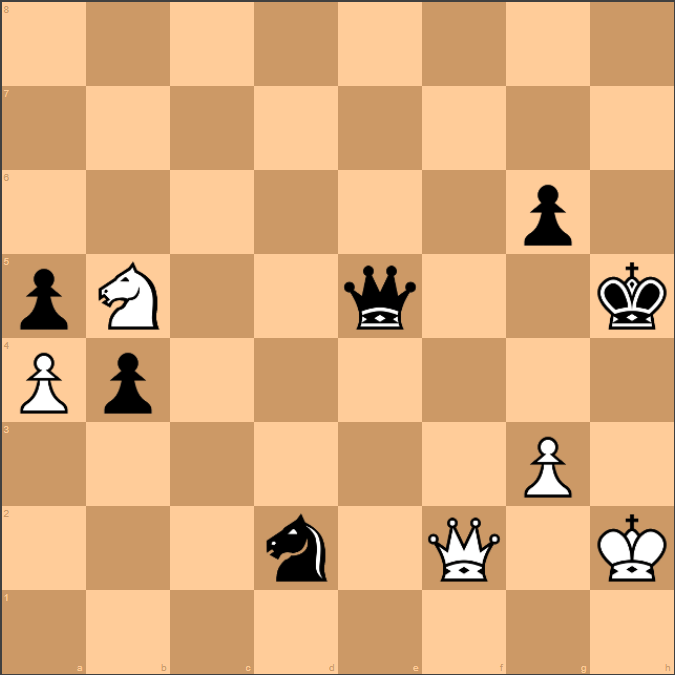 Black moves.  Can you boil it down? 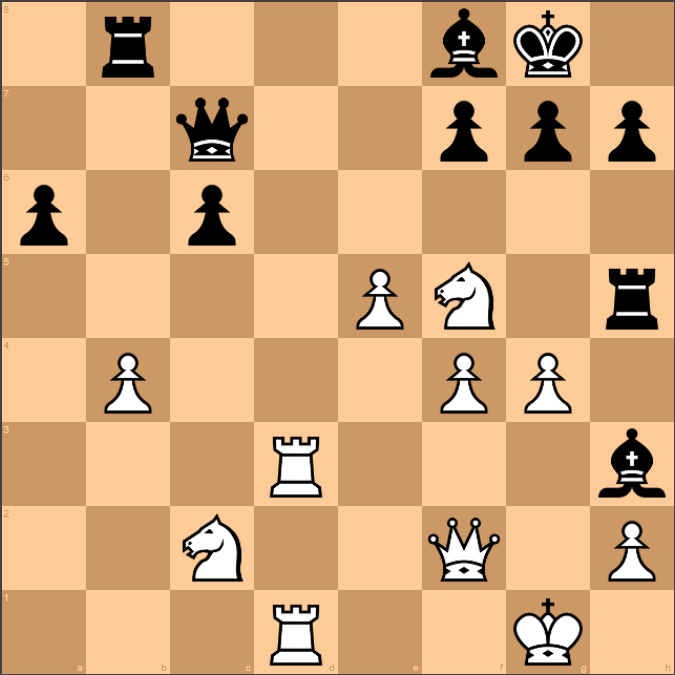 White moves.  1.gxh5 Bxf5 and black can fight.  Does white have better? 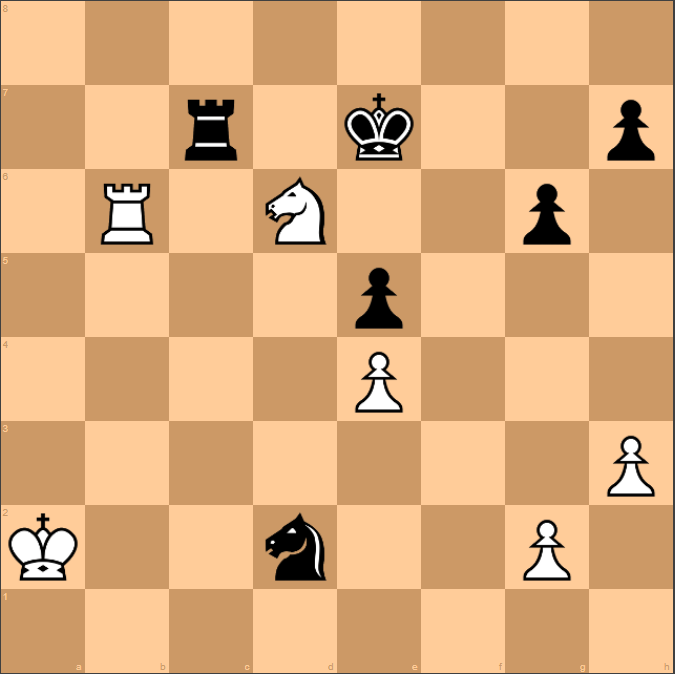 White moves.  1…Rd7 is threatened.  Can he find a way to survive?

The National Open in Las Vegas has always been one of the biggest annual tournaments on the US chess calendar, often drawing over a thousand participants. It is scheduled this year June 16-20 and the organizers are preparing for the triumphant return of over-the-board tournament play. Many of our Mechanics’ Institute players are planning to play, including former MI President Vince McCambridge. The $100,000 prize fund and showtime atmosphere are enticing many chess players to finally venture out from the pandemic lockdown. Of course you must decide if the world is safe enough for the travel and hotel venue (the Westgate, where Elvis used to stay). The tournament organizers and hotel staff are implementing safety measures, such as spraying the room between rounds, but everyone has their own individual measure of what is risky these days.

Of the tens of thousands of chess players who have played in the National Open chess festivals over the years there is one player that springs to mind who completely embodied the spirit of Las Vegas chess and gaming: Walter Browne. Browne was a six-time US Chess Champion who dominated US chess in the 1970s and was also a professional poker player. He was born in Australia but came to the US as a teenager and settled in the Bay Area in his twenties. His frenetic activity would see him playing intense time scrambles in the classical games, followed by scores of his beloved blitz chess and topped off by late night poker sessions.  Walter died in Las Vegas in June 2015 at the age of 66 after completing the National Open and a poker tournament. We give below a couple of his games these Las Vegas events.