The 2021 US Junior Chess Congress was held last weekend, with a record 962 participants taking part in the weekend's festivities! The tournament included the two-day main event, a one-day blitz side event on Chess.com, and a one-day booster event on Chesskid. This USCF national scholastic championship event had sections based on age level, so the ratings of players within a section could vary considerably. The sections of this event were age 6/u, 8/u, 10/u, 12/u, 14/u, and age 16 and 18/u. All the sections were 5-round, one-day events, except for the 16 and 18/u section, which was a 2-day 6-round event with a time control of G/60+5. Many of the stronger players played up to the two-day event, as they were not restricted to playing in their age specific section. This was a joint collaboration between the Mechanics' Institute and Chess Weekend.

What really stood out throughout the weekend was the strength of many players. The age 6/u section saw 6 players rated over 1000, and the age 8/u section had a player rated 1870. The online nature of this event gave more opportunity for inclusion for many kids, allowing them to participate in a national event that may otherwise been a challenge due to costs of travel. This just shows when barriers to participation are removed, kids play tournament chess in great numbers. It was a pleasure to follow the competitiveness of the kids throughout the weekend, and to see the social interaction and fun in the Zoom rooms amongst the kids.

Players from all across the country participated in this online event, which had a staff of 20 TD's, organizers, and commentators. NTD/FA Glenn Panner was the Chief TD of this event with USCF Senior TD/FA Judit Sztaray managing the TD staff in the virtual backroom. NTD Maret Thorpe was in charge of the tournament computer and pairings with NTD John McCumiskey assisting. We want to thank all the TD's who helped manage the Zoom rooms for kids throughout the weekend. It was an all-star cast of experienced TD's which included Danny Rohde, Martha Underwood, Sam Shoykhet, Tom Brownscombe, Jiten Patel, Aaron Thompson, Jonathan Martinez, Christina Schweiss, Al Losoff, Reka Sztaray, Jared Ruiz, and Eric Czerwin and Allyson Wong. Thanks also to my amazing partners in commentary GM Nick de Firmian and FM Paul Whitehead, and the special guests who joined us this weekend, which included IM John Donaldson, FM Kyron Griffith and FM Sunil Weeramantry.

To watch the broadcast of the all the weekend's action, please find the videos on our YouTube channel HERE

Click HERE for the full results. Congratulations to all the participants! All results are tentative, pending the completion of the fair play review.

Here are some games from the championship event, annotated by GM Nick de Firmian. 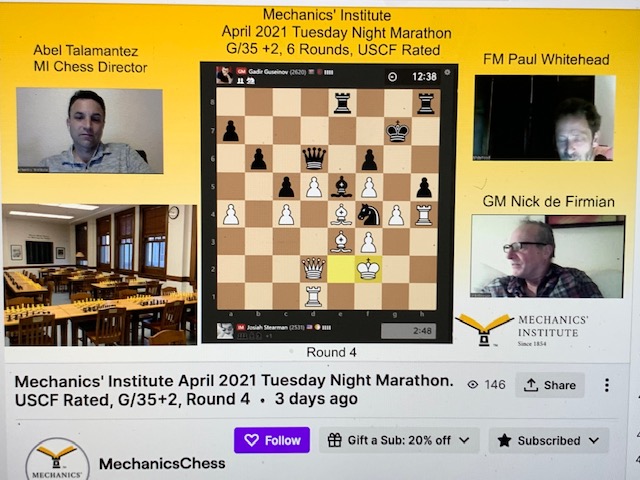 Rounds 3&4 of the April 2021 Tuesday Night Marathon saw some fierce resistance to the tournament favorite GM Gadir Guseinov, but the Grandmaster showed his class yet again in keeping his cool and getting the wins. NM Ruiyang Yan fought back from a very difficult position out of the opening to reach a queen and pawn endgame that appeared drawn, but time pressure and the need for precision proved too much in a critical moment, as a blunder allowed the trade of queens, which would lead to an eventual pawn promotion and the win for Guseinov. IM Josiah Stearman, a former student of Guseinov's, had a clear advantage out of the opening in a very complex looking game. However, Guseinov chipped away and found his opportunity with Stearman under time pressure to get the win. This is one of the first times we saw Guseinov pushed hard in two consecutive games, and while we were all rooting for our Mechanics' underdogs, it was instructive to see how the top players get it done. IM Brian Escalante also came through in both of his games, which including another thrilling win against FM Max Gedajlovic. NM Eric Hon showed he appears to be taking his chess to the next level, declining a draw offer from FM Kyron Griffith and grinding down a win. GM Gadir Guseinov is in sole first going into the final 2 rounds next week, with IM Brian Escalante and NM Eric Hon at 3.5.

In the under 1800 section, Sos Hakobyan and Ivan Zong are on top of the leaderboard at 3.5/4, with their only draws coming against each other. Joshua Lamstein picked up a big win against Sebby Suarez to go to 3/4 along with 5 other players including Nicholas Brown, Ethan Sun, Sebby Suarez, Rajtilak Jagannathan, and Anton Bobkov.

Here are some games from rounds 3&4, annotated by GM Nick de Firmian.

After 4 rounds, GM Gadir Guseinov and IM Elliott Winslow remain the only perfect scores at 4/4 heading into the final round next week. FM Kyron Griffith and FM Richard Koepcke are close behind at 3.5/4 with 8 players at 3/4. Here are the complete standings after 4 rounds. 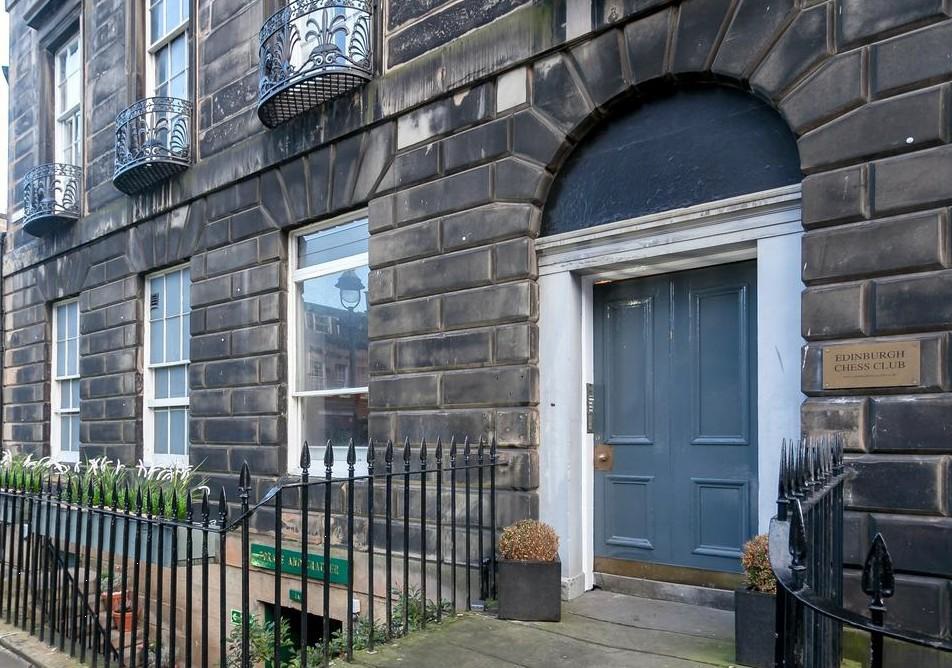 The first our our Spring Club Match Tour matches begins Saturday as we take on Edinburgh Chess Club of Scotland. The match will begin at 11am PT and we will stream the match on our Twitch channel starting at 11am PT, with commentary by GM Nick de Firmian, FM Paul Whitehead, WCM Allyson Wong, and Chess Director Abel Talamantez. Dr. Judit Sztaray will be the Chief TD pairing and starting the games. Click here to follow on Saturday morning: https://www.twitch.tv/mechanicschess

Our good friend WIM Dr. Alexey Root just released an article in ChessBase about the ratings gap and gender, analyzed through the lens of US Championships. It is an interestinf read, and can be found by following this link: https://en.chessbase.com/post/the-ratings-gap-and-gender-analyzing-u-s-chess-championships-part-ii.

Of additional interest is the photo used along with the article, which can be seen above. It is from Chess Life magazine March 1996 and in it is our very own Grandmaster in Residence GM Nick de Firmian along with Chair of the Mechanics' Institute Chess Committee GM Patrick Wolff.

Listen to an interview by IM John Donaldson regarding his newly released book Bobby Fischer and His World on The Chess Circuit podcast by following this link: https://anchor.fm/thechesscircuit/episodes/Podcast-20-IM-John-Donaldson-about-Bobby-Fischer-and-His-World-eugg59

Emanuel Lasker’s 27 year-reign as World Champion ended in Havana, 1921.  His challenger, Jose Raoul Capablanca, had basically twisted Lasker’s arm with the offer of a large fee - he even refused Lasker’s offer to resign the match before it started.  Everyone was happy, and even though Lasker had the excuses of age and a hostile climate, the inevitable outcome was not really in doubt.  The “Invincible Cuban” finally wrested the title from his old rival, +4 -0 =10.  The games are languorous: carefully played and a bit tired – especially on Lasker’s part - as though the players were just going through the motions. 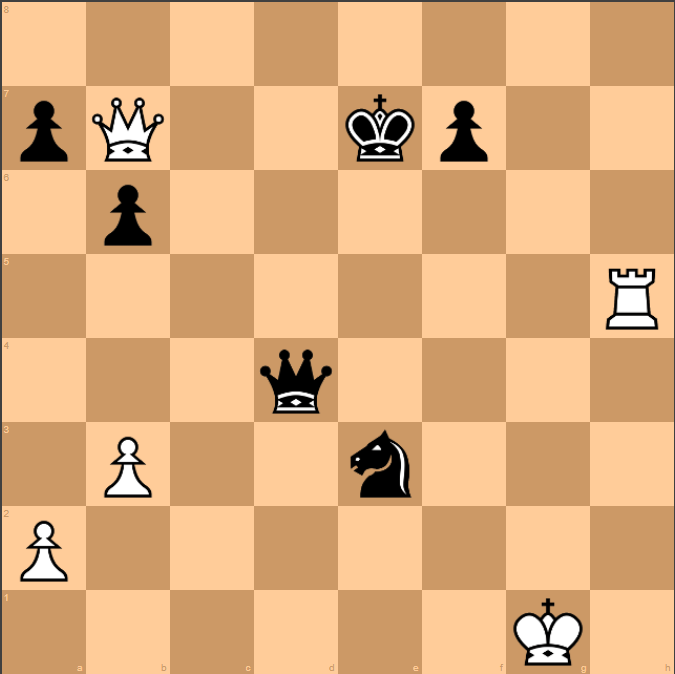 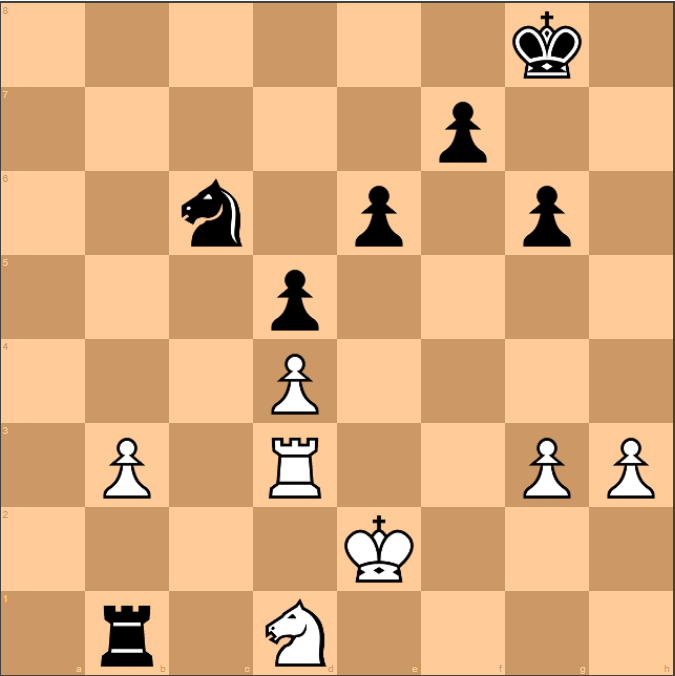 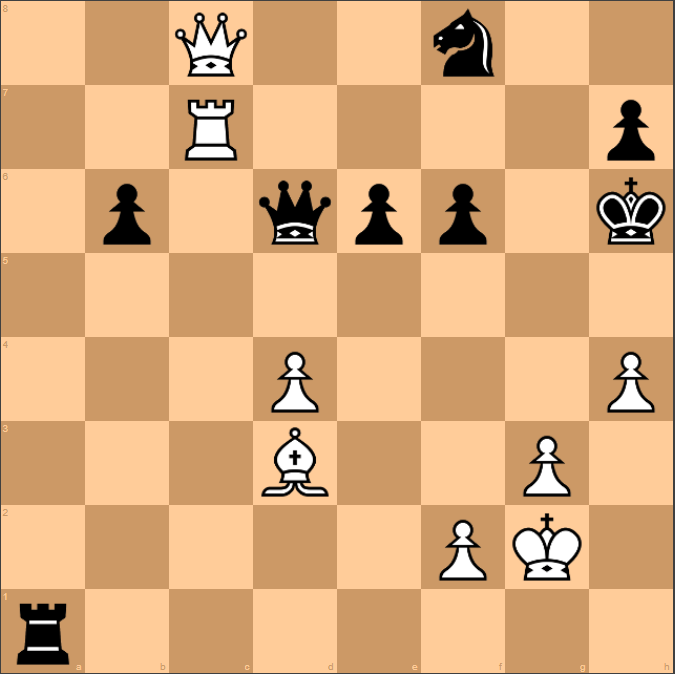 White moves.  Yet another classic combination. 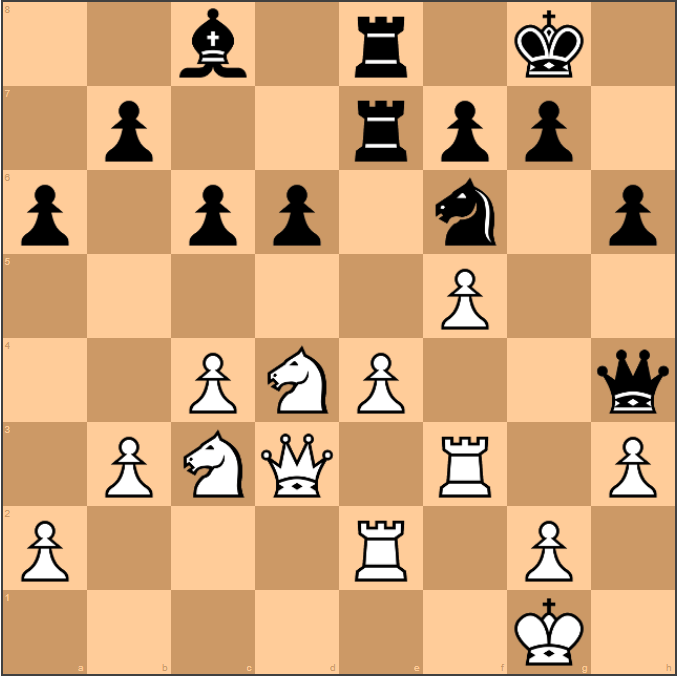 The Return of the Candidates Tournament

The long awaited resumption of the Candidates Tournament began on April 19th for the second half of the double round robin. The best thing about this was the absolutely superb level of chess that is being played there. After a year of online rapid play events, it is a great pleasure to see deeply thought out strategies and very few errors. These quality games are works of art that will be saved in books for future generations to enjoy. I recommend the reader to spend your time viewing many of the games of this event as they are so unlike the chess that has been played in the last year. We all have gotten used to managing life in the pandemic times, but there are many things that will simply be much better when life returns to normal. The high intensity of over the board chess games is one of those, and right now you can enjoy it’s return.

The resumption after a year continued with the scores from the pre-pandemic half, with Nepomniachtchi and Vachier-Lagrave in the lead,  Caruana and Giri 1 point behind. Ding Liren has returned, but he needed a miracle to overtake the leaders and that doesn’t seem to be happening. The race for first took a twist in the first round of resumption when Caruana played co-leader Vachier-Lagrave (MVL). Caruana had saved his best opening preparation for months to surprise MVL, who nonetheless responded with incredible resourcefulness. We give this epic encounter below – a game I consider to be the best of the last year.  The other tournament games are also incredible battles. As a second choice we give the encounter between the two Chinese players, world #3 Ding Liren and underrated Wang Hao (who is a favorite of MI staff).

1.e4 c5 2.Nf3 d6 3.d4 cxd4 4.Nxd4 Nf6 5.Nc3 a6 6.Bg5 This game was destined to be a real fight. Fabiano Caruano is the best prepared opening player in the world. Maxim Vachier-Lagrave is the best Najdorf player in the world and he plays the opening religiously like Bobby Fischer years ago. While many players are reluctant to play the Sicilian in the computer age Maxim feels he can survive any complications the opponent (with deep computer preparation) can throw at him. 6...e6 7.f4 Qb6 8.Qd2 Qxb2