Mechanics' Institute Will Reopen For Live Chess Starting in June

It has been a long year, and we are excited to announce plans to reopen live chess at the Mechanics' Institute next month with the Tuesday Night Marathon (TNM). Scheduled to start on June 1st, the TNM will have limited capacity, based on City and County of San Francisco regulations, so please sign up early. We will post event details and COVID precautions soon, along with registration information. The event will be a five-round open section TNM that will be FIDE-rated, as well as USCF-rated. Stay tuned for more details in the coming days, we will announce when registration is open via our Facebook page: https://www.facebook.com/mechanicschess and via our email list, which you can join HERE.

The Mechanics' Institute will face off against the Hamburg Chess Club from Germany in the final match of the Spring Club Match Series. It will be held on Saturday, May 15 at 10am PST on Chess.com and we will broadcast the match live on our Twitch channel here: https://www.twitch.tv/mechanicschess. The match will be 20 players each side, each player playing 2 games against the same opponent, G/15 +2 with each player playing white and black. Here is the lineup for Mechanics'

Good luck to the team for this historic club match. Go Mechanics'!

The Mechanics' Institute was just edged out in a very close match against the Royal Dutch Chess Club 17-16. The Mechanics' had three trustees representing the team, including GM Patrick Wolff, FM Mark Pinto, and Mike Hilliard, along with many club regulars. This was the third event in our Spring Series Club Matches with the world's historic clubs. We would like to thank Gosse Romkes, Stefan, and all the players from the Royal Dutch Club for helping organize this very entertaining match.

You can watch the broadcast by following this link: https://www.youtube.com/watch?v=mXp1Q8Cm0mU

Here are some games from the match, annotated by GM Nick de Firmian

Everyone at Mechanics' Institute is excited that our traditional of in-person chess is returning, albeit gradually given local and state regulations, with our next TNM. While we are glad we were able to continue chess during the closures during a time of turmoil and uncertainty and will continue some virtual tournaments, nothing beats the feeling of being inside the Mechanics' Institute building and chess room with its wooden tables, historic pictures, and memories of games and people. Our online events served as a way for all of us to stay connected during the closures, while welcoming new players to our community. We look forward to seeing old friends and new players in person as we reopen.

Mechanics' Institute is grateful for the partnerships developed with other clubs in this country and around the world, which we plan to sustain and continue utilizing to stay connected to the larger, global chess community as well. Online play will continue to be a part of the Mechanics' Institute. The Thursday Night Marathon Online will continue, as well as some scholastic and regular events online in addition to live.  We will also continue online classes.

At this writing, 70 players are entered in this two section TNM. We always enjoy watching the first two rounds of the TNM in search of upsets, and the first round certainly delivered. Max Hao upset IM Elliott Winslow in the top section and Pranav Pradeep was upset by Adithya Chitta. GM Gadir Guseinov crusied through his first round, but was engaged in a very complex position in round 2 against NM Michael Wang that captivated almost the entire round 2 broadcast. FM Kyron Griffith, FM Eric Li, FM Max Gedajlovic, NM Eric Hon, and Austin Mei also remained perfect in the top section, making for some exciting rounds 3 & 4 matchups next week.

In the under 1800 section, top seed Aaron Nocoski took advantage of a critical blunder by Paul Krezanoski in a king and rook vs. king and pawn on 7th rank endgame to finish with 2/2. Also perfect after two rounds are Joshua Lamstein, Ethan Sun, Mike Hilliard, Sebby Suarez, Adithya Chitta and William Kelly.

To watch the broadcast of rounds 1&2, please click here: https://www.youtube.com/watch?v=DKoxQhVQBbo

Here are some games from the rounds, annotated by GM Nick de Firmian

The Thursday Night Marathon concluded round 1 with 41 players. Players wishing to join for next week in round 2 may do so with a half point bye for round 1. Time control is G/60+5, 5 rounds in total with games starting at 6:30PM PT. If you wish to register, please follow this link: https://mechanics-institute.jumbula.com/2021OnlineTournaments/ThursdayNightMarathonG605MayJune2021

Here are the standings after round 1.

Monday's 4:00-5:30PM - Mechanics' Chess Cafe
Ongoing casual meeting to talk about chess, life, and pretty much everything else of interest. Join 3-time US Champion GM Nick de Firmian and FM Paul Whitehead as they give a lecture and class in a fun casual atmosphere where you can discuss games, learn strategy, discuss chess current events and interact in a fun casual atmosphere. Enter our Monday chess café for the pure love of the game. Class suitable for ALL level of players and FREE for MI members.
FREE for Mechanics' members. $5 for non-members.
More information: https://www.milibrary.org/chess/chess-cafe
Register: https://mechanics-institute.jumbula.com/2020OnlineClasses_120/ChessCafe

Wednesday's 5:00-6:30PM - Free Adult Beginner Class for Mechanics' Members
Are you an adult who wants to put learning chess on top of your New Year's resolution? Get a head start with us at the Mechanics' Institute! This virtual class is open to any MI member who has no knowledge of the game or who knows the very basics and wants to improve. Taught by MI Chess Director Abel Talamantez along with other MI staff, we will patiently walk through all the basics at a pace suitable for our class. Our goal is to teach piece movement basics, checkmate patterns, importance of development, and general strategy. We will also show students how to play online so they may practice. The goal of the class is to open a new world of fun and joy through the magic and beauty of chess, from one of the oldest and proudest chess clubs in the world.

Registration: Current class is full.
Next class starts June. Free for MI members. Members will have to register online to secure their spot and to receive an email confirming the Zoom link: https://mechanics-institute.jumbula.com/2021OnlineClasses/FreeAdultBeginnerClassforMechanicsMembersJuneJuly2021
More information: https://www.milibrary.org/chess/free-adult-beginner-class-mechanics-members

IM (International Master) Elliott Winslow will be teaching this course, which will go over one of the greatest players (world champions, groundbreakers, players who advanced chess theory and practice) per week, including some of the history of the player and the time period in which they made their mark, and use their games to instill basic tactical and positional thinking to those in the class. The class will also conduct a weekly game analysis of at least one game from the star of the week, and show how to find tactics in that game and through puzzles, and at the end of class either leave time open to go over games sent by the participants ahead of class, or for the students to play some games.

The 1934 rematch between these old drinking buddies was hardly taken seriously by the chess world at the time.  Up and comers like Botvinnik, Keres and Fine would have given Alekhine a much harder time, not to mention Capablanca (who Alekhine continued to dodge).  Even the aging Lasker would have fared better in this boozy brawl of a match . The final lopsided score of +8 -3 =15 in Alekhine’s favor doesn’t tell the full story – Bogoljubov found a way to lose some winning positions, for example: 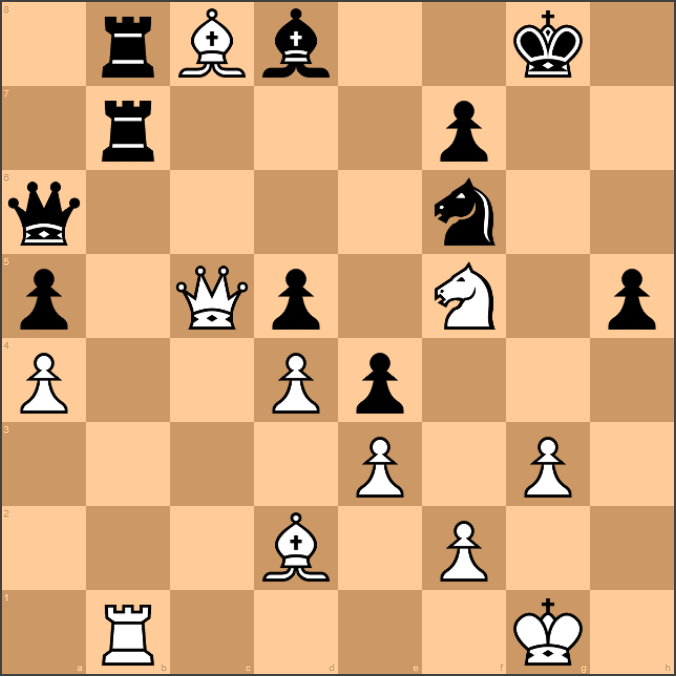 Here, instead of playing the obvious 1.Bxb7 Rxb7 2.Rxb7 Qxb7 3.Bxa5 with a winning endgame, Bogoljubov played the atrocious 1.Rb5?? (“I really don’t know what he was thinking of.” – Kasparov) and found himself the exchange down and dead lost after 1…Rxb5 2.Bxa6 Rxc5 3.dxc5.

Despite the criticisms leveled at the players, some pretty little combos and tactics came out of this match – chess itself prevailed! 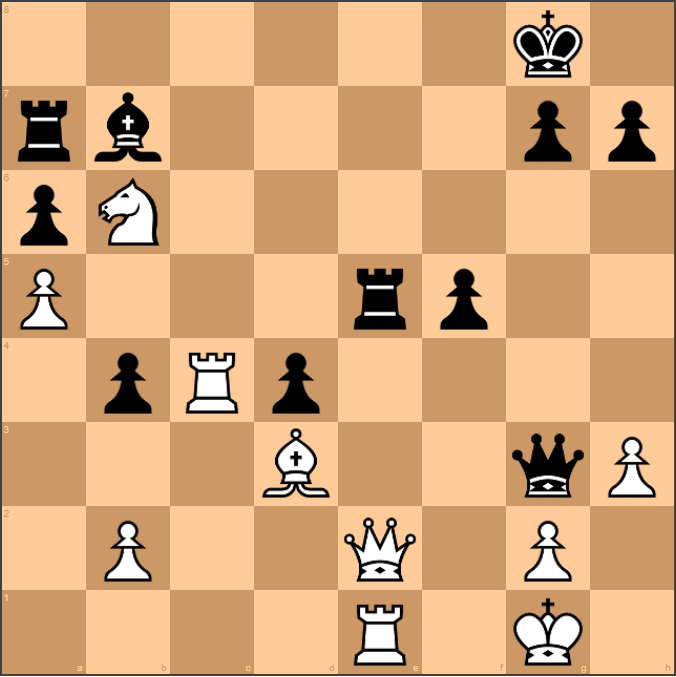 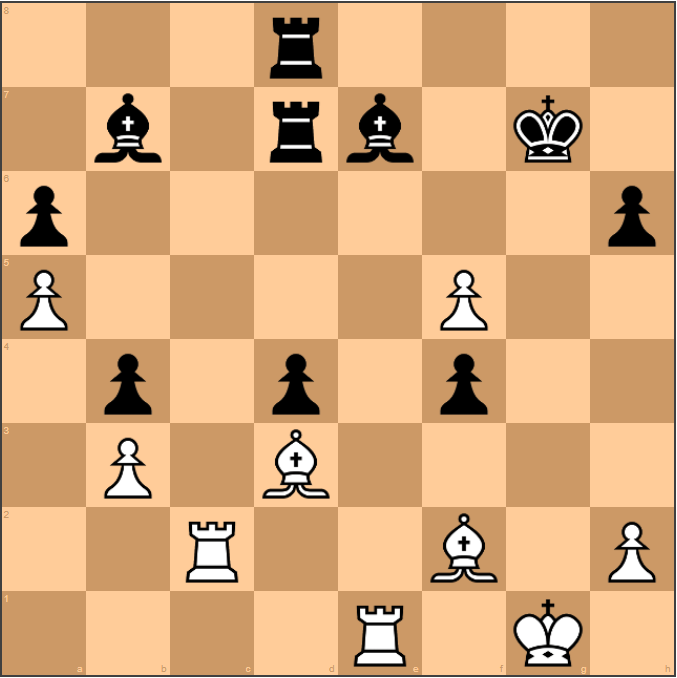 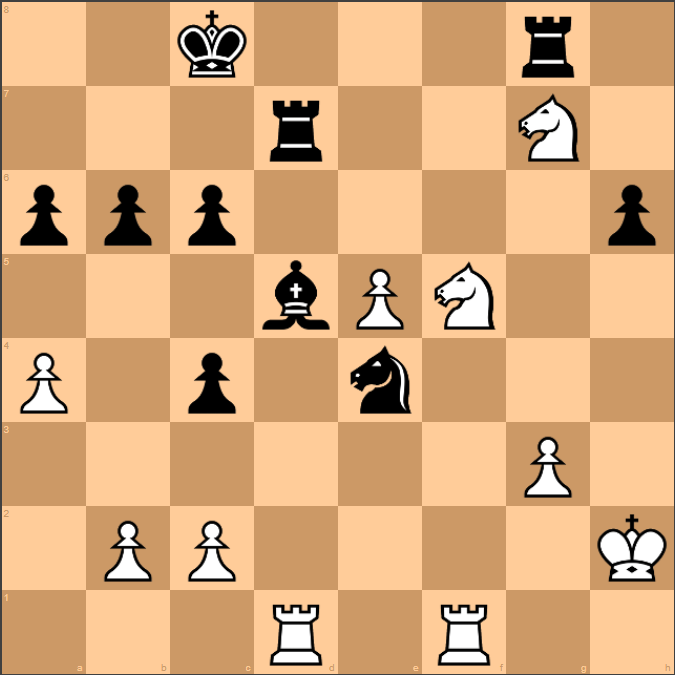 White moves.  Yet another long and forcing sequence. 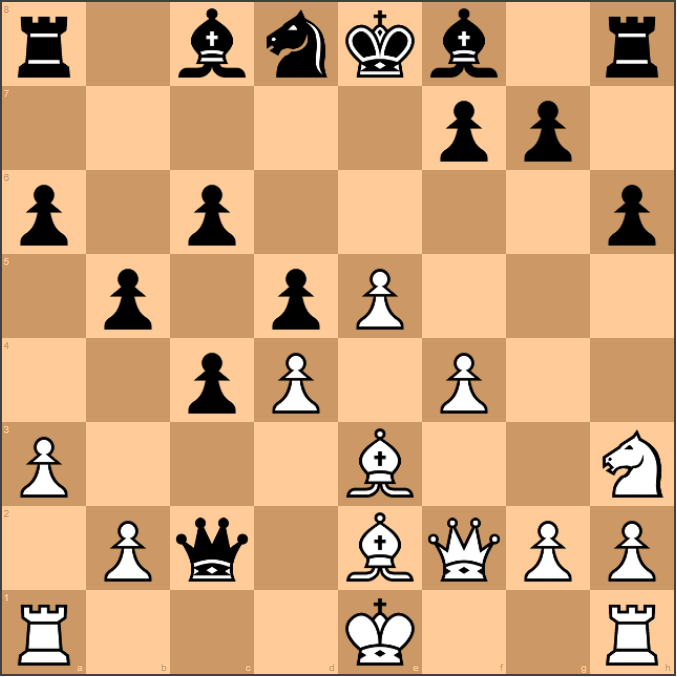 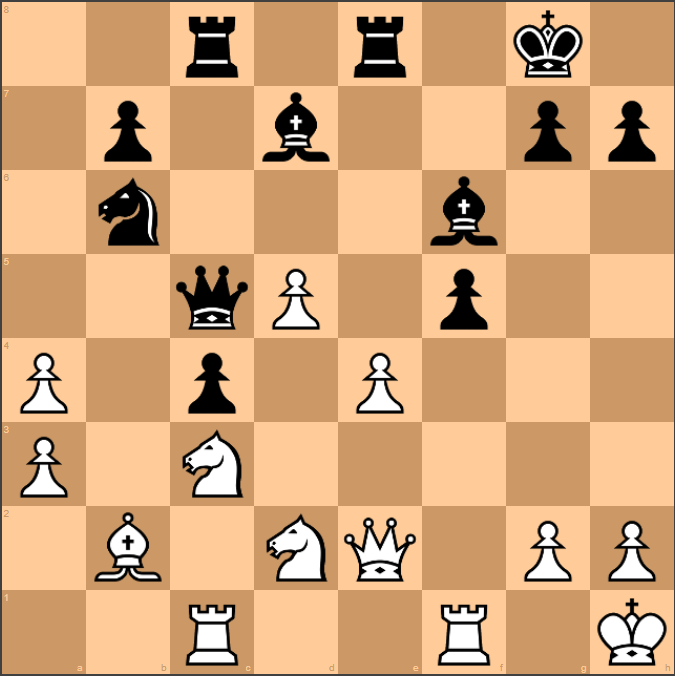 Black moves.  White’s position is a house of cards – blow it down. 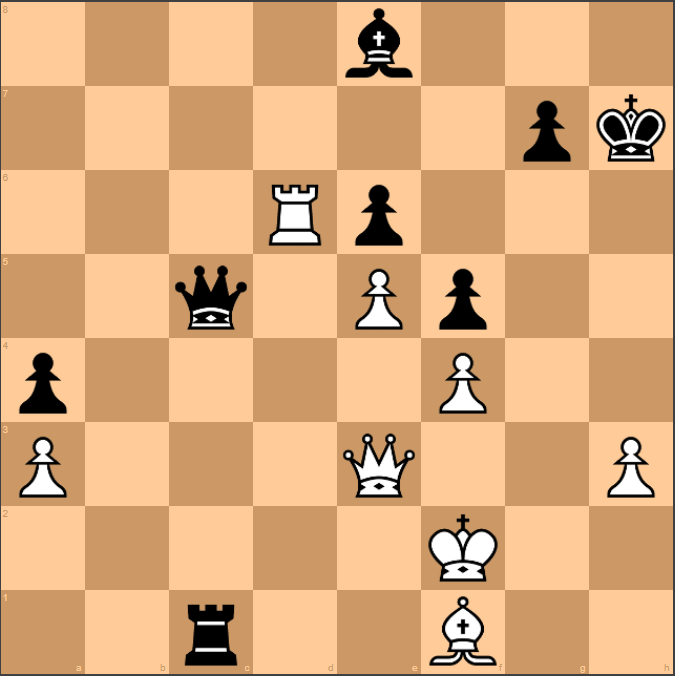 Black moves.  The very last move of the match.

The Mechanics’ Institute has had great team matches with the other historic chess clubs of the world these last months. This is a benefit of the pandemic and online chess, as it seems our players thoroughly enjoy these team events. The responsibility of playing for your club instead of just yourself gives a different kind of engagement to the battle. You do not worry so much about your individual game except as it matters to the overall match. You are part of a group where each player plays for the good of the team. You can do your part by drawing a higher rated player or holding on in a bad position for the match victory. If it all goes wrong you can at least commiserate together at the end.

This Saturday we play against Hamburg Chess Club, another of the oldest clubs in the world. I have some fond memories of that chess club which was also the opponent of my club more than a decade ago when I played the “Bundesliga” for the Lubeck Chess Club. Lubeck is the farthest north of the German Clubs and we would meet Hamburg for a match twice a year. Of course these were the traditional over the board matches and the club would travel by cars or train. (Once a year we would do a long trip to the very south of Germany and that would take all weekend.)  These were very serious games, but friendly rivalries between the clubs. The Hamburg Chess Club was particularly friendly as they were “neighbors” to Lubeck, only 30 miles away. I still recall Hamburg’s excellent and friendly club leaders.

The Bundesliga has been the premier chess league in the world for several decades as the clubs pay for hired guns at the very top of the world rating list. Anand, Kramnik, and other world champions have been on their roster.  We give below a game of Anand’s from his job at the club of Baden Baden, a famous city for chess. I include also a game of my own from the Bundesliga. It’s not so special, but gives me fond memories of slowing doing my part for my team.

71...d3+ My opponent resigned and I headed off to meet my teammates at the restaurant, mine being the last game to finish. 0-1