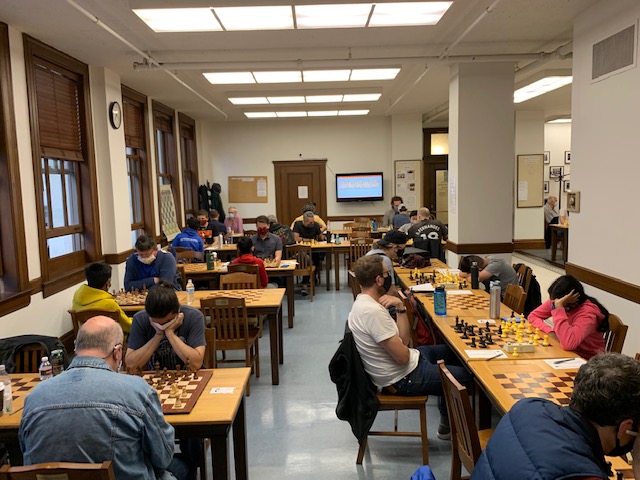 Round 3 of the Tuesday Night Marathon was one of the longer nights ever, as we had nine games extend past 10:30pm, with the final two games ending after 10:45 pm on the top two boards. FM Kyron Griffith worked himself out of a losing position for much of the game, showing his master resilliency in creating enough complications to even out the position against Theo Biyiasas. He then took advantage of time pressure as he induced a miscalculation with less than a minute left on Theo's clock to take the win. It was an incredible game by Theo, who deserved a better outcome. Kudos however to Kyron for staying with keeping his composure to create his opportunity to win. On board 2, Gary Harris missed a winning move on move 33 that would have provided a big upset over IM Elliott Winslow, but it was Winslow who found all the right moves after in a sharp attacking position to close the show and get the win. Harris mentioned to me he was trying to channel the attacking spirit of Mikhail Tal, as he was sitting in the chair commemorating him in the chess room. He fell just short, but the game certainily showed a fighting spirit. Griffith and Winslow are the only two remaining perfect scores in the top section with 3/3, and will square off next week in what should be an exciting matchup. Abhinav Penagalapati of the San Jose Chess Club is close behind at 2.5/3. 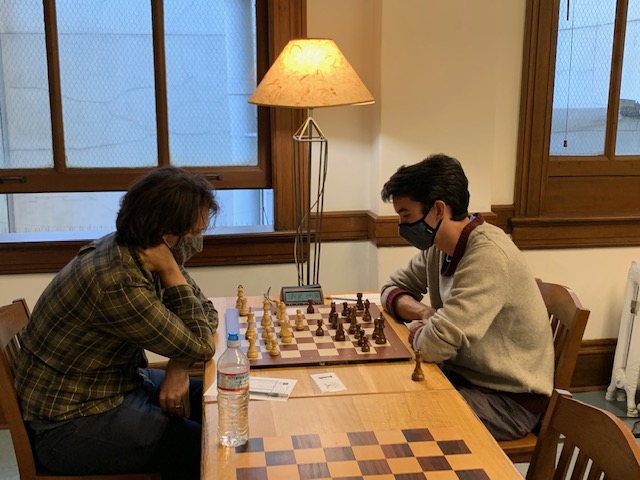 In the u/1800 section, unrated Leon Quin won a tough battle against Kevin Sun, using a rook and two knights effectively against Sun's two rooks. He brings his score to 3/3. Sebby Suarez and Nursultan Uzakbaev also won their games to get to 3/3. With Uzakbaev taking a bye next week, we should have a very exciting matchup between Suarez and Quin in round 4. Joel Carron is close behind at 2.5/3.

You can watch the all the action of round 3 with commentary by GM Nick de Firmian and FM Paul Whitehead by clicking here: https://www.youtube.com/watch?v=maV2HvNXGVQ

Black is under strong pressure for the piece. The trickiest and probably best move here is to guard the knight with also a counter threat 8...Ncb4 8...Nce7 Richard's move is solid but should lead to trouble if you are playing a great attacker like Morphy. 9.0-0 This is good but [9.d4! is the most aggressive move. Black cannot take the pawn as Qe4+ would immediately win the piece back.] 9...g6 10.d4 c6 11.Qg4+? This is the source of Whites troubles. The queen check looks aggressive but just drives the black king to a safer square and loses a tempo as the bishop on c8 uncovers an attack. [11.Re1 would be the way Morphy played. Also 11. Bg5 or 11. dxc5 would be good. Then White would have a strong attack worth more than the piece sacrificed.] 11...Kf6 12.dxe5+ Kg7! 13.Qg3 Be6 14.Bg5

6.Nd5! This excellent move crosses up Black's plans. There is no good discovered check when the queen is attacked. 6...Qc5 7.Ne3 0-0? Continuing to play for quick development, but this costs a piece and the activity gained is not worth it. It was necessary to move the black queen or bishop and remain just a pawn down. 8.c3! Nc6 [8...Ba5 9.b4 Bxb4 10.cxb4 Qxb4 11.Bd3 is a piece and development ahead] 9.cxb4 Nxb4

Very fine play by Joel against risky and dangerous play by Albert. 1-0

Here are the standings after three rounds:

We are very excited to return to live chess at the Mechanics' Institute, but we remain committed to our online events, as they offer an opportunity for members and players to participate in our qulaity events in a convenient and still very competitive way. Our new Thursday Night Marathon begins next Thursday and will have a new format. Much like our previous TNM online, it will be two rounds per evening with a time control of G/35+5, USCF online rated. Games will be paired manually on Chess.com and we will broadcast the games live with commentary by GM Nick de Firmian, FM Paul Whitehead, and myself. Judit Sztaray will be the Chief TD. Games begin at 6:30pm PT.

Additionally, we will resume our GM Nick de Firmian/FM Paul Whitehead Arena on Thursdays starting next week at 5:00pm PT. This arena is free for members of our online community, and will last 1-hour with a time control of G/5+2. Take your shot at playing a 3-time US Champion, or our commentator extraordinaire, as they banter live during play on our broadcast.

To register for the ThNM and to get full tournament information, click here: https://www.milibrary.org/chess-tournaments/first-new-thursday-night-marathon-online

Join us next Thursday night, for live action online from the Mechanics' Institute! 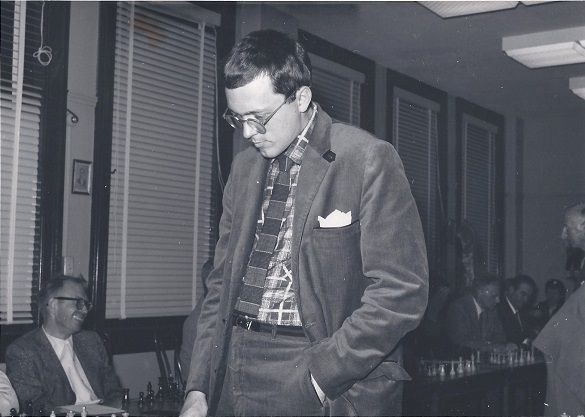 The William Addison Memorial, named for our former Chess Director, will take place live at the Mechanics' Institute on Saturday June 26, 2021