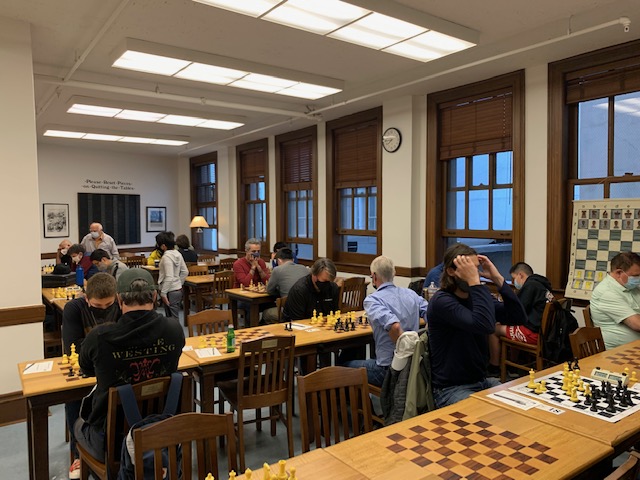 Round 4 saw a batlle of the top two players, and the game lived up to all expectations. FM Kyron Griffith began launching a kingside attack against IM Elliott Winslow early in the game and on move 19, he took a pawn leaving his queen open for capture. Of course, capturing the queen would have led to defeat, but it was a surprising looking move that drew a crowd to board 1, and a crowd around the television broadcast of the board inside the chess room. Kyron went on to win the game and the open section with a round to spare, as he leads by a full point. Since he will receive a pre-tournament requested bye for the final round, He will finish with 4.5/5 and sole first place. Five tough players sit at 3/4 currently, and will fight for 2nd place next week. Those player are IM Elliott Wonslow, Theo Biyiasas, Nicholas Weng, Ako Heidari, and Gary Harris. Nicholas Weng scored an impressive win against Andrew Guo, despite arriving 30 minutes late after a late arrival in SFO from the National Open in Las Vegas. 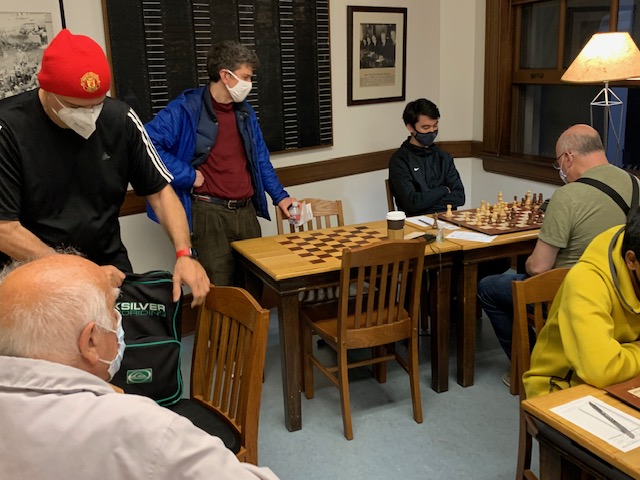 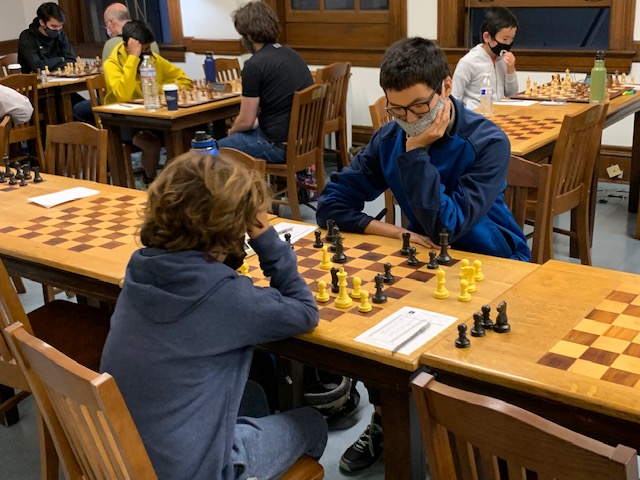 FM Kyron Griffith and Elliott Winslow played an exciting game on board 1, while Leon Quin prevailed on the top board in the under 1800 section against Sebby Suarez

In the under 1800 section, a battle of undefeateds was won by Leon Quin, as he defeated Sebby Suarez. He now has sole first place with 4/4, and will face Joel Carron next week, who sits at 3.5/4. Right behind are five players, including Suarez, Jacob Morgan, Paul Reed, Andrew Imbens, Andrew Ballantyne, and Nursultan Uzakbaev.

Here are some games from round 4, annotated by GM Nick de Firmian.

29.Rd1! This time the "quiet" move is the best move going away! Mate follows. 29...Qe5 30.Qh7+ With this win Kyron not only clinched the tournament with one round to go (his last round, since he had already taken a last-round half-point bye), and the rumor is he also gets his FIDE rating up to the necessary 2400, having gotten his third norm in the just-completed National Open in Las Vegas! Congratulations to International Master-elect Kyron Griffith! 1-0

The first two rounds of the new Thursday Night Marathon online format finished on Thursday, and we have a strong turnout of 44 players, including 2 GM's, 2 IM's, an FM and 2 NM's. This is an 8-round event with a time control of G/35+5, with two games played per evening over four weeks. We are broadcasting the Thursday Marathon live with commentary, so we may bring both the Tuesday and Thursday Marathons to all viewers online.

Since this is an open section tournament, the first two rounds were about underdogs looking for big upsets. GM Alex Lenderman, GM Gadir Guseinov, IM Bala Chandra Dhulipalla, and FM Max Gedajlovic got through the first two rounds unscathed and go to next week 2/2. The two national masters in the tournament, NM Mike Walder and NM Tom Maser fell victim to mouse slips in their first round games. IM Elliott Winslow also faced a tough battle in round 1 against Paul Krezanoski resulting in a draw. Eight players remain with perfect scores headed into rounds 3 & 4 next Thursday night.

For full standings, please visit the event page here: https://www.milibrary.org/chess-tournaments/first-new-thursday-night-marathon-online. Watch the broadcast of all the action that evening by clicking HERE.

As we get back to live over the board play, it stands to reason there will be a little rust from both players and tournament directors regarding rules and expectations. Experiencing the first four rounds of the TNM, we have seen quite a few actions from players that reminds us the importance of going over some rules again. For your information and entertainment, here are some things that have caught our attention that players should be aware of. We will also make this announcement prior to the next rounds of the TNM as well as the Addison Memorial this weekend.

1. Scoresheets must remain on the table at all times. Here is the USCF rule: 15A. Manner of keeping score. In the course of play each player is required to record the game (both the player’s and the opponent’s moves), move after move, as clearly and legibly as possible, on the scoresheet prescribed for the competition. Algebraic notation is standard, but descriptive or computer notation is permitted. The player must first make the move, and then record it on the scoresheet. The scoresheet shall be visible to the arbiter (tournament directors) and the opponent throughout 40 US Chess Federation’s Official Rules of Chess, V 7.1 Edition 7-19-19 the game.

I saw a player grab their scoresheet after making a move, and leave the table with the scoresheet in hand to go observe another game. The player had not realized they had done this, and did not know the rule, so I just informed the player without incident and gave a warning. The scoresheet must remain at the table, visible to the players and arbiters at all times.

2. No photos inside the playing hall, especially from parents! This should be obvious, but sometimes parents are not aware of the larger implications in trying to get that action photo of their child in the middle of a game. Taking a photo of a position could raise suspicion of cheating, as it is possible to analyze the position from a picture and give advice if a child leaves the playing hall. Please ask the arbiter to take a picture, or take one at the start of the game with the erbiters permission.

3. Do not inform other players it is their move. Here is the associated rule: 20E2. Unsolicited advice. Ruling on unsolicited advice can be difficult. The giver deserves a penalty, but what of the recipient? The director’s task is to prevent a player from benefiting from advice but also not unduly penalize the player for another’s offense. We saw some players let their friends know it was their move in the game, which should never be done as it can constitute helping. Players should play their own game and not interfere in the games of others. A player will receive a warning for this, and would be subject to additional penalties including forfeit of their game.

4. No analyzing games in the playing hall that are going live. Here is the rule: 20F. Analysis in the playing room prohibited. No analysis is permitted in the playing room during play or during adjourned sessions. See also 1C2, Director discretion; 21F, Player requests for rulings; and 21K, Use of director’s power. I warned two players who were following the action of one of the games of the TNM on the big screen in the room not to discuss the game. Even though it was clearly away from the action, there were other games going on in the room and even body language and pointing can suggest information about a position. Please do not discuss the positions of live games inside the playing hall, and players in active games should not discuss ANY games.

5. Don't stand to close to games you are spectating. The applicable rule that gives arbiters broad discretion is here: 20G. Annoying behavior prohibited. It is forbidden to distract or annoy the opponent in any manner whatsoever. A director, upon a complaint by the opponent, has discretion to determine whether any particular behavior is in violation of this rule and to impose penalties. See also 1C2, Director discretion; 21F, Player requests for rulings; and 21K, Use of director’s power. I saw quite a few players spectating other games where they stood way to close, which as almost every player knows can be quite a distraction. Give a respectable distance when observing games, trying as much as possible to be out of the immediate view of the players playing the game.

I suggest players take a look at the USCF rulebook online HERE. These rules and all the others are there to protect the integrity of games and are for the benefit of all players. Please seek out an arbiter if there is something that you feel is compromising to the game or player experience.

Games from the National Open from TNM Players

The National Open concluded last weekend in Las Vegas, and we had a strong presence of Mechanics' players there. FM Kyron Griffith achieved his third and final IM norm, and Sebby Suarez won the under 1300 section. The winner of the event on tiebreaks went to IM Arthur Guo from Georgia, who played the 2020 US Cadet Championship we organized online. His winning the Edmondson Cup was quite an achievement, considering there were over 20 GM's in attendance.

Here is a mate in 3 from longtime Mechanics' Institute employee Tony Lama. This should occupy a good chunk of your time this weekend! 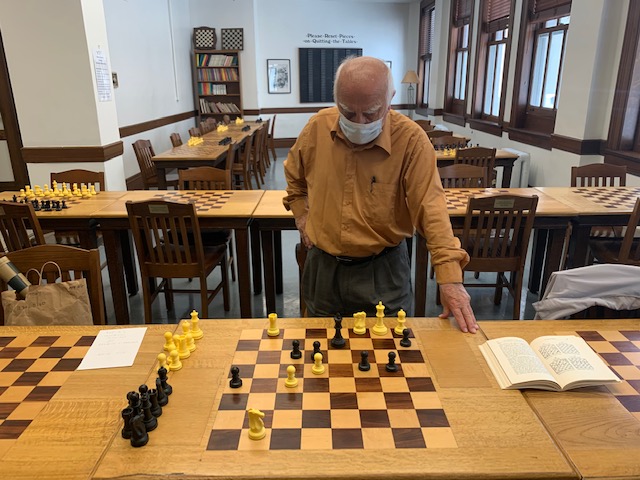 Last weekend saw the resounding return of live chess in the United States with over a thousand live participants at the National Open in Las Vegas. It was an amazing scene to see so many chess players in one huge room again, quickly giving everyone the feeling that the pandemic is fading away and that life is returning to normal.

We saw Kyron Griffith scoring well with his usual resourcefulness. He has proven he can come back from daunting odds online in the shorter time control. It is another thing playing classical chess where the time control is slow and blunders much rarer. He reached a pawn down bishop ending against grandmaster Melikset Khachiyan. Any normal player would need a great struggle to draw the game, but we are talking Kyron here. We show now this game and a last round game to decide a share of first place between Hans Nieman (who was a regular at the MI a few years ago) and one of the pre-tournament favorites. We should have a couple other MI member games elsewhere in our newsletter.

28...Nh2! The black pieces all come into play with decisive effect. 29.Rh1 Nf3 30.Qe3 Qf4! White resigned. There are too many threats, starting with 31...Nd2+ and 32...Rc1 mate. Thus Nyzhnyk tied for first. We expect Hans to start winning these last rounds with a little more experience. 0-1