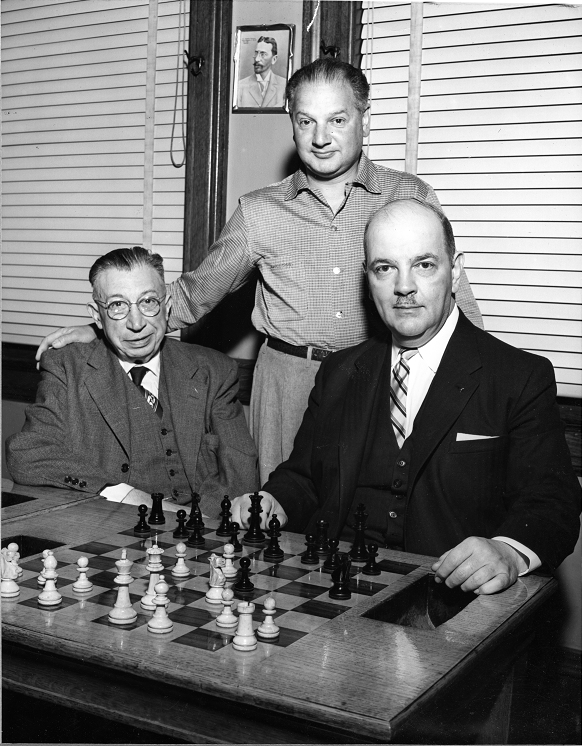 Join us this Sunday for the 20th Charles Bagby Memorial live at the Mechanics' Institute with four rounds USCF rated G/45;d5. The tournment starts at 10am with free street parking.

WCM Allyson Wong will be the Chief TD along with Chess Director Abel Talamantez and Assistant TD Michael Hsu. We look forward to a great Sunday live at Mechanics' Institute!

Tuesday Night Marathon Round One Report

The Tuesday Night Marathon has returned to its seven-round, three-section format with 66 players. While the limited BART service, with trains not yet running past 9pm PT, is keeping some folks away for the time being, things are returning to normal. We have an increased turnout from our last TNM, and we look forward to regular public commuting options returning to full strength soon, helping facilitate more players joining us at the Mechanics' Institute building for chess once again. 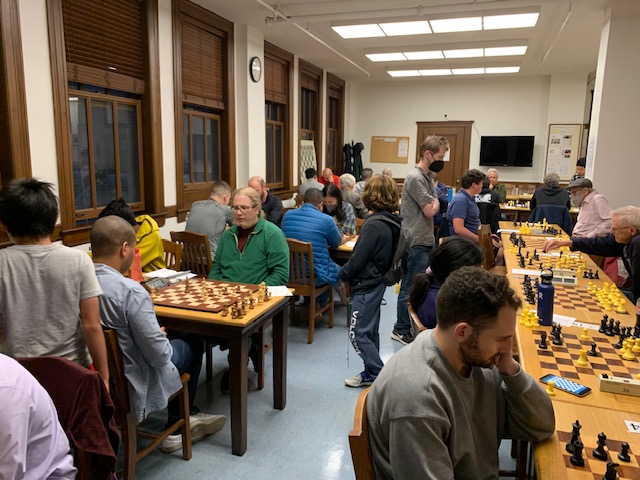 In the top section, board 1 featured a battle of seasoned Mechanics' Institute veterans IM Elliott Winslow and Kristian Clemens. The game went long, and it appeared as if Clemens was going to hold the position in an enedgame with rook, knight, and pawns. However, a miscalculation led to a trading of material with Winslow getting the opposition in a king and pawn endgame to seal the win. A tough break for Kristian in an otherwise very well played game. Also with first round wins were NM Siddharth Arun, NM Christophe Bambou, Abhi Penagalapati, and Chelsea Zhou. Chelsea received a full point bye and would be paired with Juan Cendejas in an extra rated game, which was beautifully played by Juan. He responded to Chelsea's Sicilian with 2 b4!? He got the win, showing even the DGT technical manager extraordinaire still has solid game left in his tank. 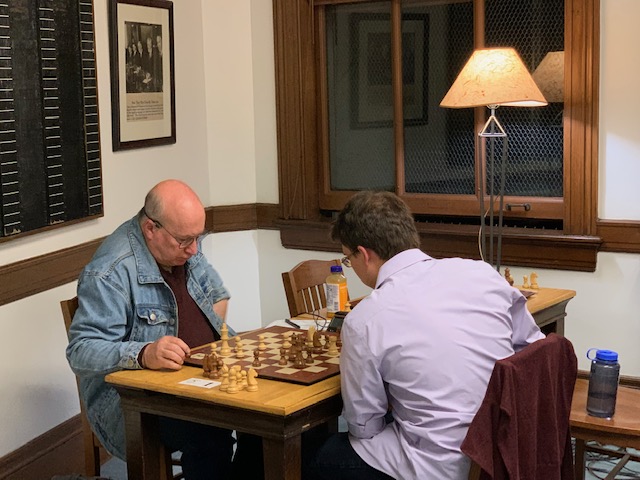 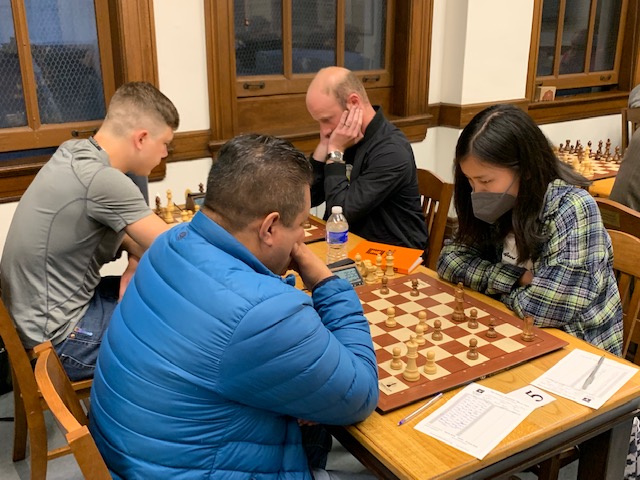 IM Elliott Winslow and Kristian Clemens on board 1. Juan Cendejas vs Chelsea Zhou on board 5 and Adam Mercado and Joel Carron next to them on 6

In the under 2000 section, nine players go into week 2 with one point. The standout in this round was Albert Starr, who played very well in his upset of Luiz Uribe. Also among the point scorers were Mechanics' regulars Marty Cortinas rising youth Kevin Sun, who upset Glenn Kaplan. In the under 1600 section, 13 players are with one point. Among them are Valerie Jade and David Olson, as well as the up and comin young players Sebby Suarez, Andrew Ballantyne, and Issac Sterling. With 7 rounds of play, there is still ample opportunity for big moves in the standings. Also a big shoutout to Tobias Rex, who came back from a lost position against Sammy Agdamag to win the game.

It was a fun atmosphere at the chess club, as we had the Annex open for post game analysis and skittles. It was great to see players analyzing their games after and play recreational chess once again in that room. 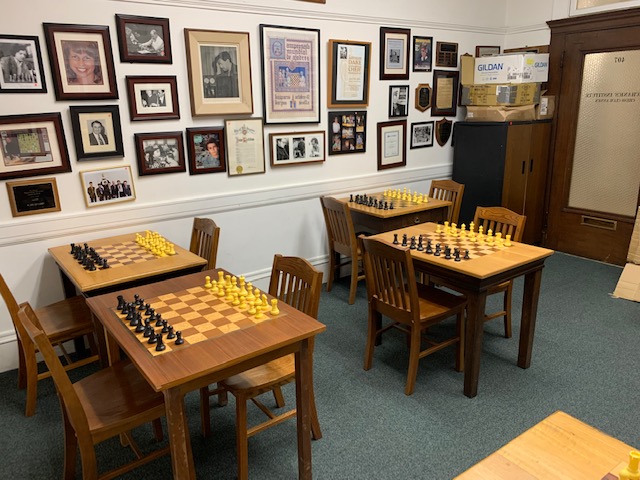 The Chess Annex ready for analysis and skittles 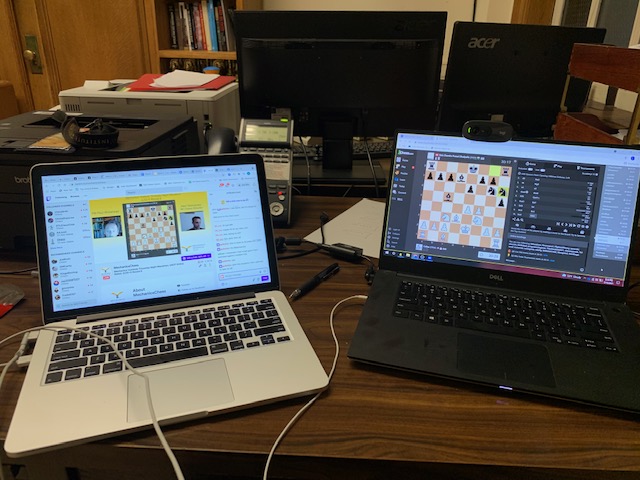 Broadcast setup from the Mechanics' Institute

The final two rounds of the Thursday Night Marathon produced the matchup everyone had been waiting for - the matchup in round 7 of the two GM's Gadir Guseinov and Alex Lenderman again showed that GM Guseinov is a standard of play above many. He put Lenderman in a very tough position right away, and although Lenderman found the right moves to continue on, the pressure eventually became insurmountable, with Guseinov winning material and the game. Guseinov would go on to defeat Austin Mei in the final round in a very interesting game to win the Thursday Night Marathon with a score of 7.5/8. IM Bala Chandra Dhulipalla defeated IM Elliott winslow in round 7 and then survived a great game played by Cailen Melville in round 8 to get a draw in a losing position. It was still enough for Dhulipalla to finish with 6.5/8 and clear 2nd place. 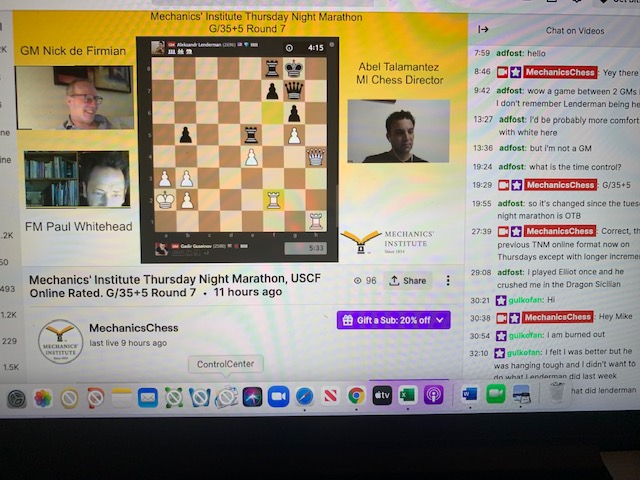 Perhaps the game of the round was the matchup in round 8 between FM Max Gedajlovic and GM Alex Lenderman. Max fought bravely and aggressively, obtaining an advantage positionally. After reaching the middle game in a worse position, Lenderman offered a draw which Gedajlovic, after some thinking, declined. He showed the mettle of a player looking to go next level in pressing on in a winning position despite the opposition. It is always a gamble, as the lower rated player is trying to maintain an advantage and fighting against the calculating abilities and expeirence of a seasoned GM. Lenderman pressed on, finding opportunities to complicate the position, and after putting Gedajlovic in time pressure, created enough chaos in the position to get the win desite being the exchange down for much of the endgame. It was a great game to watch, and we will have annotations for the final rounds of the ThNM in the next newsletter. Kudos to Max for going for the win, but kudos as well to Lenderman for staying cool when things got hot.

Special shoutout to Mechanics' regulars Cailen Melville and Jonah Busch for an outstanding performance in this event, as well as Marina Xiao. She will be a force to bre reckoned with in the coming years.

Here is a mate in two from longtime Mechanics' Institute player Tony Lama. This should occupy a good chunk of your time this weekend! 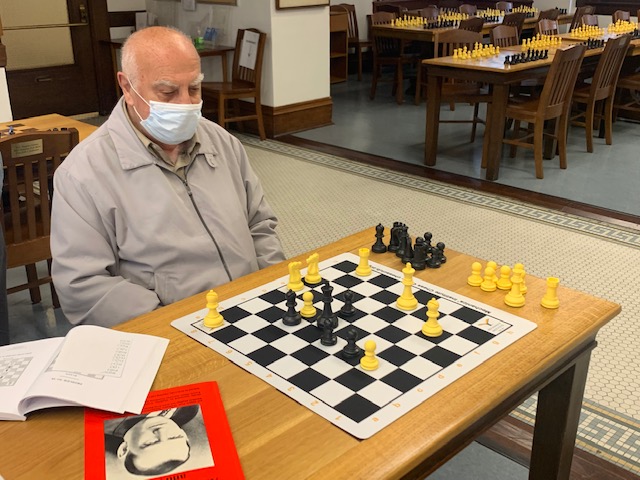 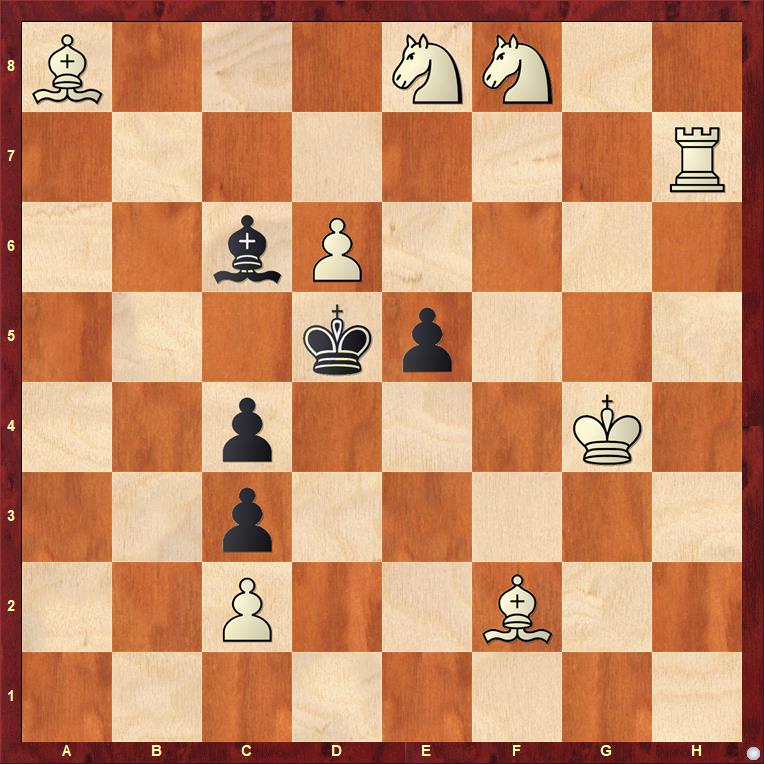 White to move and mate in 2

After losing the title a year earlier, Botvinnik exercised his right to a rematch (under FIDE rules at the time) and came out slugging – he won the first three games and ultimately the contest by the score of +7 -5 =11.

The players were not at their best: both came down with the flu, and both were prone to strange mistakes and lapses: 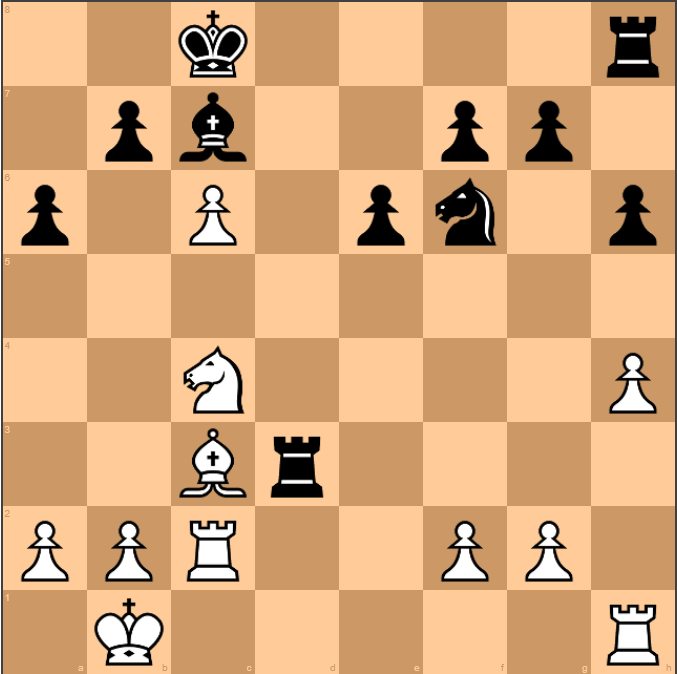 Here the World Champion made the elementary blunder 1.Ne5? losing 2 pieces for a rook and ultimately the game after the simple 1…Rxc3! 2.cxb7+ Kxb7 3.Rxc3 Bxe5.

Even more surprising was what happened here: 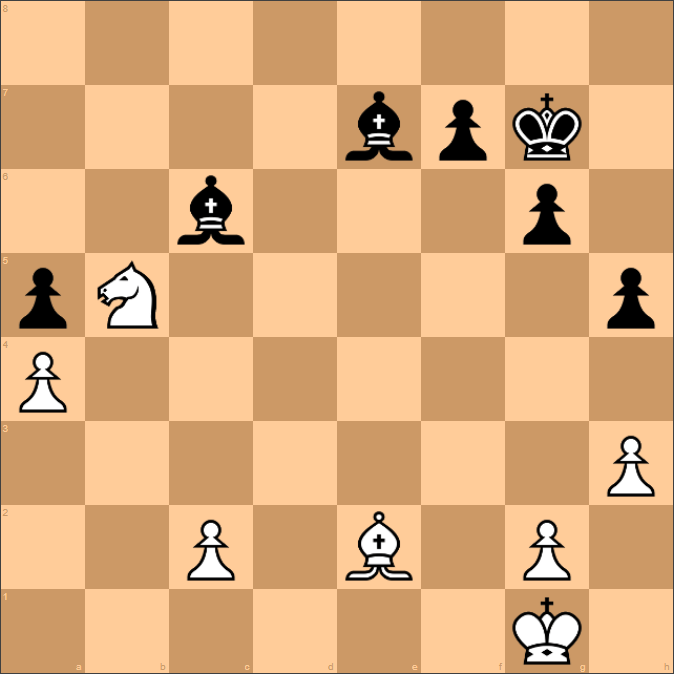 Black was enjoying his position so much (he’s very close to winning) he “forgot” about the clock and lost on time! 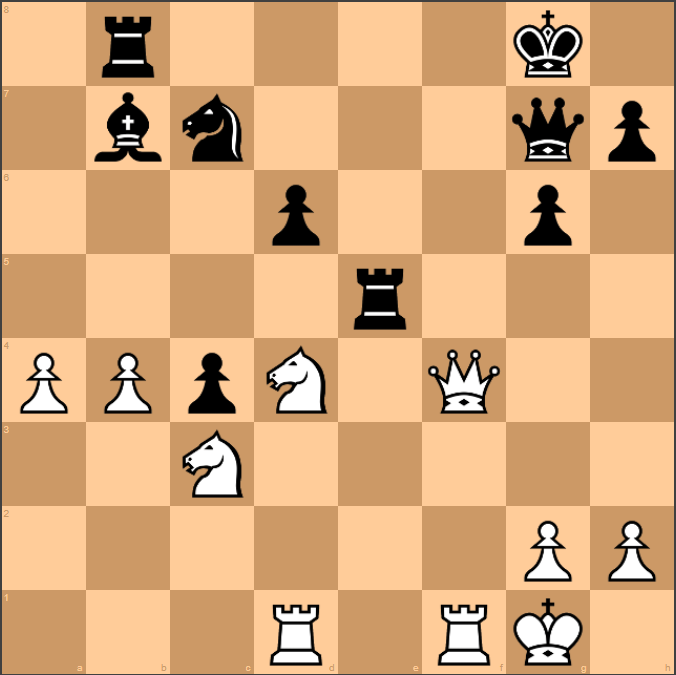 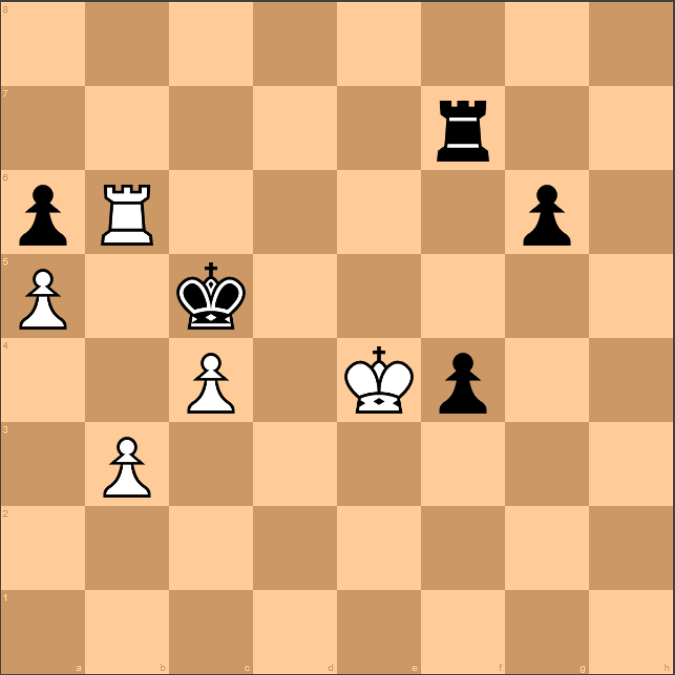 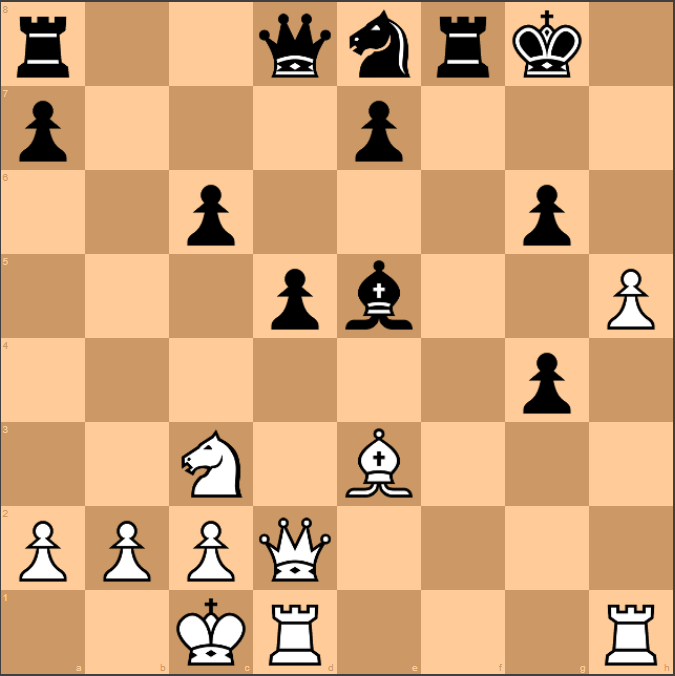 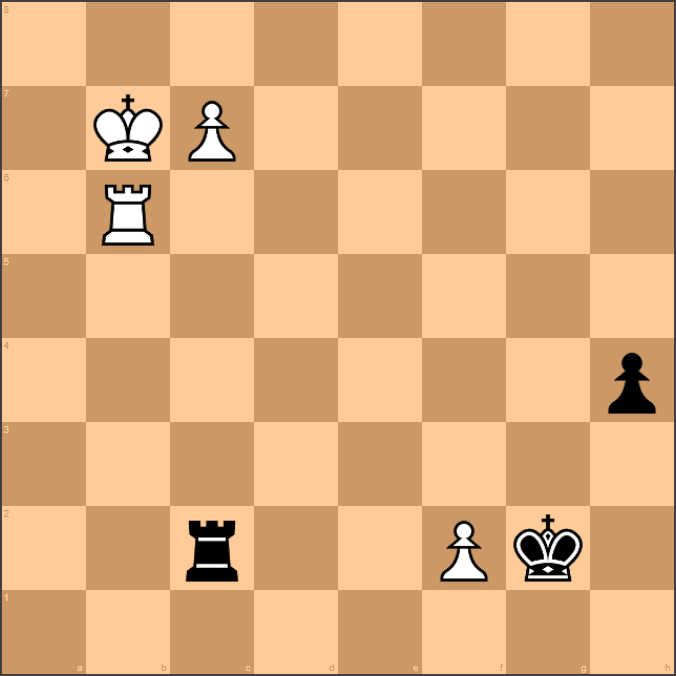 White moves.  Not difficult, but be accurate.

The Old Man and the Chessboard

In Hemingway’s famous novel about an aging fisherman, the protagonist battles for days to reel in a great marlin. Ultimately he wins the battle against the marlin, but fails when encountering too many sharks that eat the marlin tied to his boat and steal his hard-earned victory.

The Grand Croatian Chess Tour saw the return of the great Garry Kasparov to the chess board. He too ran into a bunch of sharks who stole all his points, and in eighteen rounds of blitz chess against the young top players of today Kasparov scored only two and a half points. This disappointing showing is usually done by an amateur who gets to play with the pros, and that player is often labeled the “fish” of the tournament. It was painful to see how a great champion can fall.

“The old get old and the young get stronger” sang Jim Morrison. So perhaps we must resign ourselves to playing worse chess as we age. Here we have some good news for those who wish to defy the march of time. Second place in this same tournament went not to one of the young sharks, but to 51 year old Vishy Anand. Anand is of course a former world champion and was a rival to Kasparov in the 1990’s. It was inspiring to see him vanquishing players half his age. The rest of us may take solace that excellence at chess isn’t just about age, but about staying motivated and dedicated to the game.