The top section of the Tuesday Night Marathon was still wide open entering the evening's round, as already there were no perfect scores remaining after two rounds. However, three players delivered decisive results to create a little seperation in the competition. 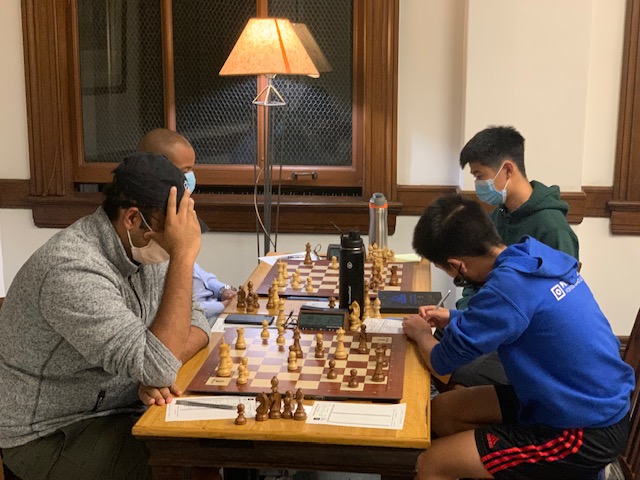 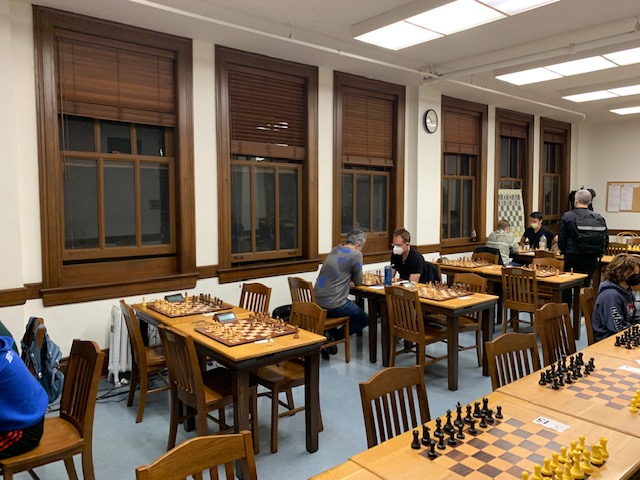 NM Siddharth Arun won an impressive game against Nicholas Weng on the top board, and Richard Liu showed amazing defensive poise in holding what looked like an inferior position for much of the game against Christophe Bambou to find his opportunity and get the win. Abhi Pebagalapati, fresh off a dominant 5/5 win in the open section at the San Jose Chess Club Summer Championship the previous weekend, won a quick game against Anthony Acosta. All three of those players lead the section with 2.5/3.

In the under 2000 section, Kevin Sun won the battle of unbeatens as he defeated Leon Quin. Adam Stafford had a quick decisive result against Albert Starr, leaving Sun and Stafford as the only remaining perfect scores in the section.

In the under 1600 section, Isaac Sterling won against Sebby Suarez in what was the final completed game of the evening after over four hours. David Nichol defeated Dominic Zirbel on the broadcast board, leaving Nichol and Sterling as the only perfect scores in that section. 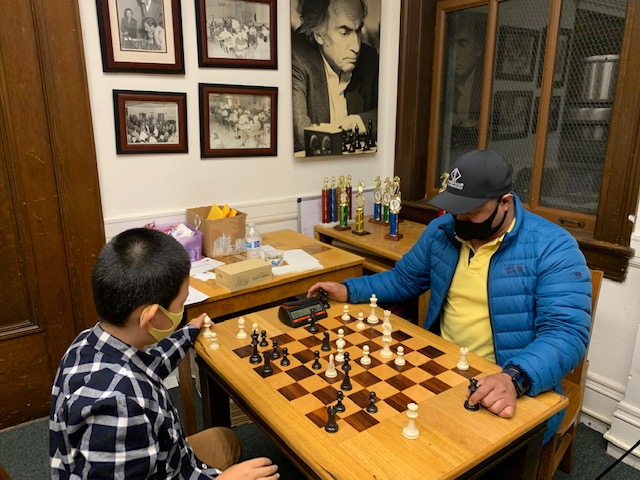 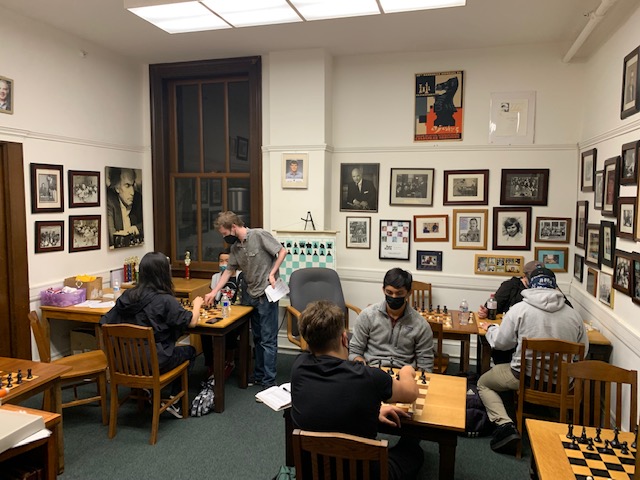 With four rounds still left to play, there is plenty of time for players to make a move up the standings. It was a great atmosphere inside the Mechanics' Institute, as for the first time in well over a year, the Chess Annex was alive with blitz, game analysis, and plenty of conversation. It was great to see Tuesday nights regain the lively vibe of chess play and discussion, the re-emergence of the spirit of San Francisco chess. 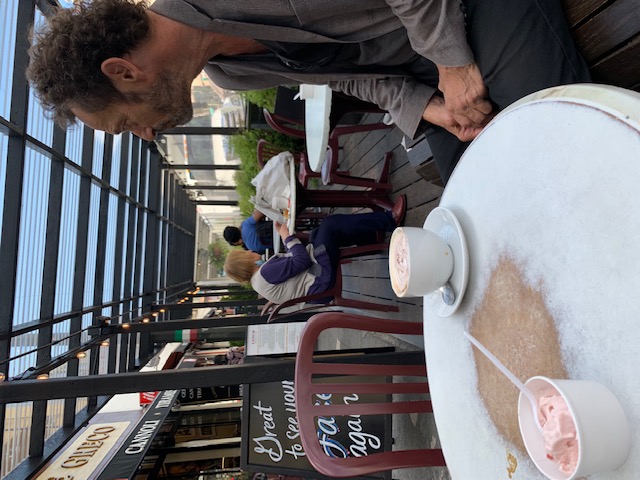 Earlier in the afternoon right before the round, Paul and I took a walk to North Beach, where he gave me a brief tour of some of the cafes, restaurants, and bars that have been part of the local city chess scene. San Francisco has a great deal of cultural chess history, from local policeman playing on the street, to the Market street chess tables, to regular gatherings for casual play around the City simply for conversation, comaraderie, and for the pure enjoyment and love of the game. This chess scene, seperate from the world of rated games and competition, is of particular interest to me and something I would love to learn and share. If anyone would like to write something about this for the newsletter, or has some good stories to tell about the San Francisco non-tournament chess scene, please let me know by reaching out to [email protected]

The players agreed a draw, but White is in trouble. The knight is better than the bishop, and 32...Nb8! followed by 33...Na6 wins a pawn. William was probably happy to draw his experienced opponent, but objectively had all the chances to win. 1/2-1/2

To watch the broadcast of round 3, please follow this link: https://www.youtube.com/watch?v=fcuObSaNwzo

The first 2 rounds are complete in the Thursday Night Marathon online, and the top players made it through the opening rounds. Kudos to Katherine Sunny Lu for a great performance in upsetting Sanjeev Anand and holding a draw against Nikunj Oza in a tough position.

To watch the entertaining broadcast of the first 2 rounds, please follow this link: https://www.youtube.com/watch?v=g8pbRxulR0U 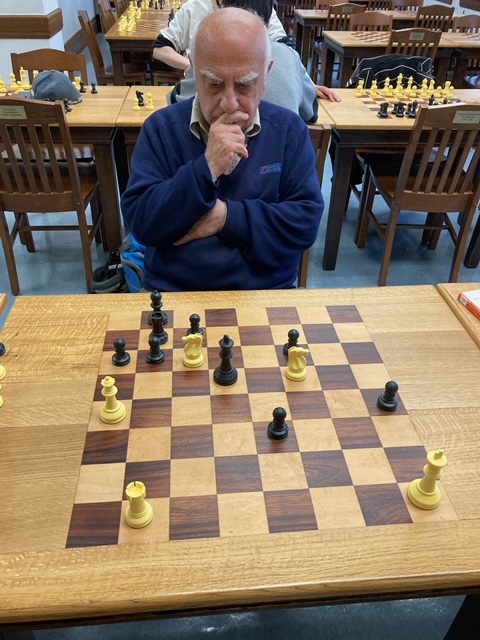 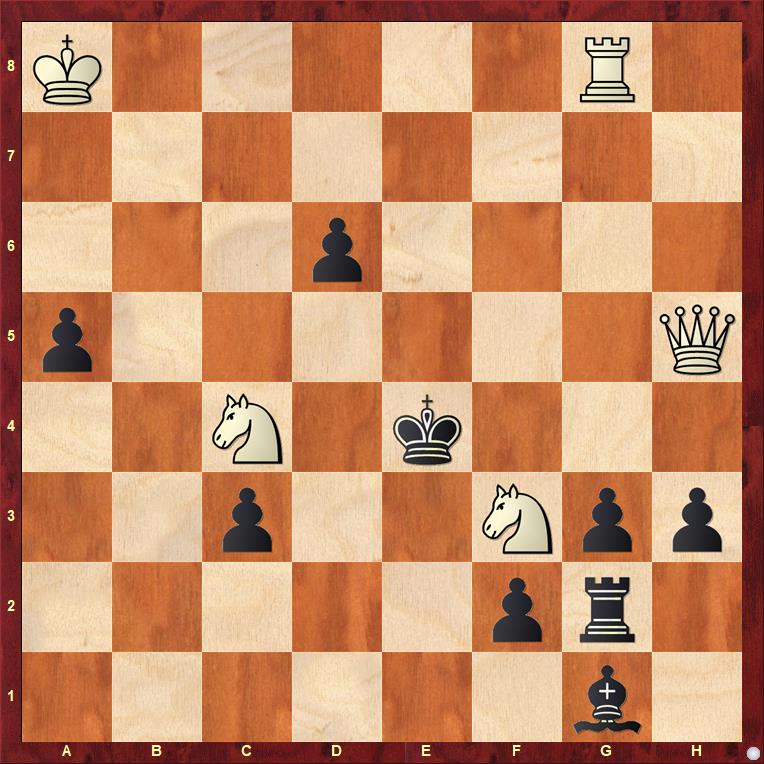 White to move and mate in 4

Botvinnik’s next challenger was the crowd-pleasing attacking genius Mikhail Tal, the “Magician from Riga”.

The challenger took the first game in his signature flashy style and never looked back, with the final score a convincing +6 -2 =13.

The youngest World Champion in history (until Kasparov in 1985) at the age of 23,

Tal’s wonderful attacking play was nowhere more evident than in the following game, and his electrifying twenty first move: 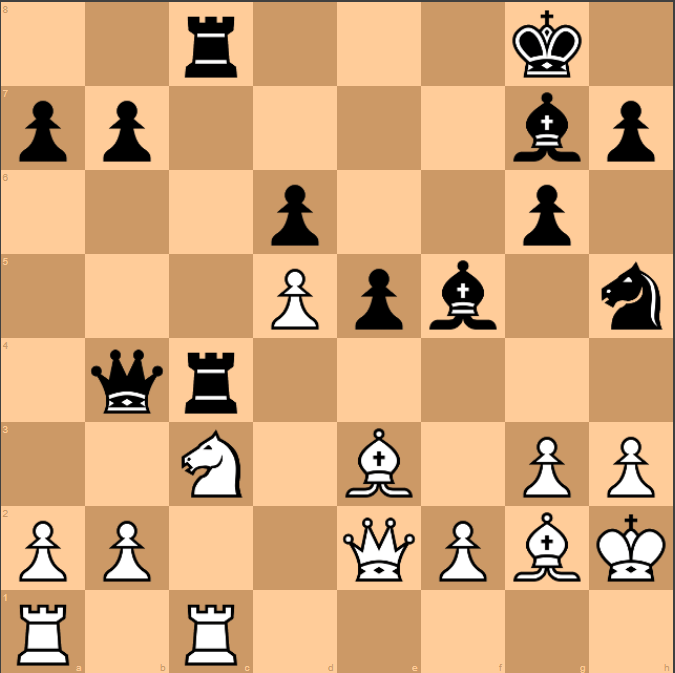 Do yourself a favor: find Tal’s book of the match for a deep analysis of this game.  It remains one of the finest chess books ever written. 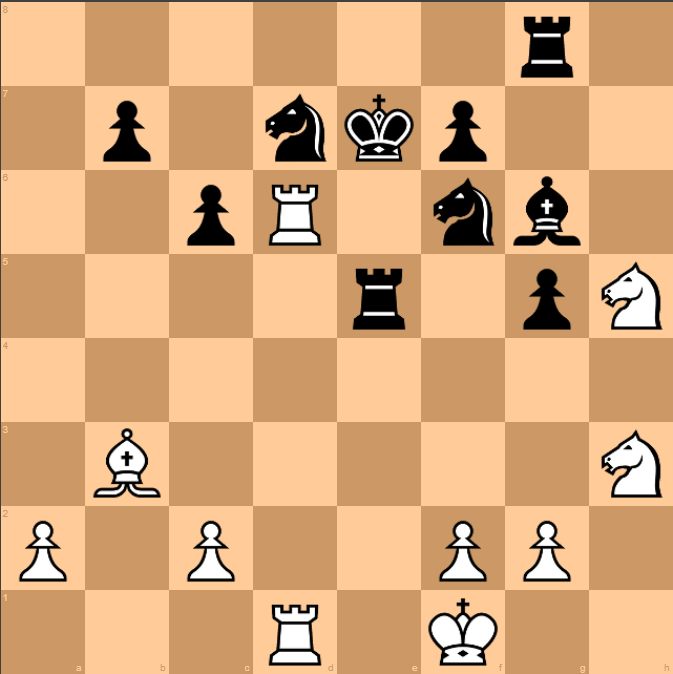 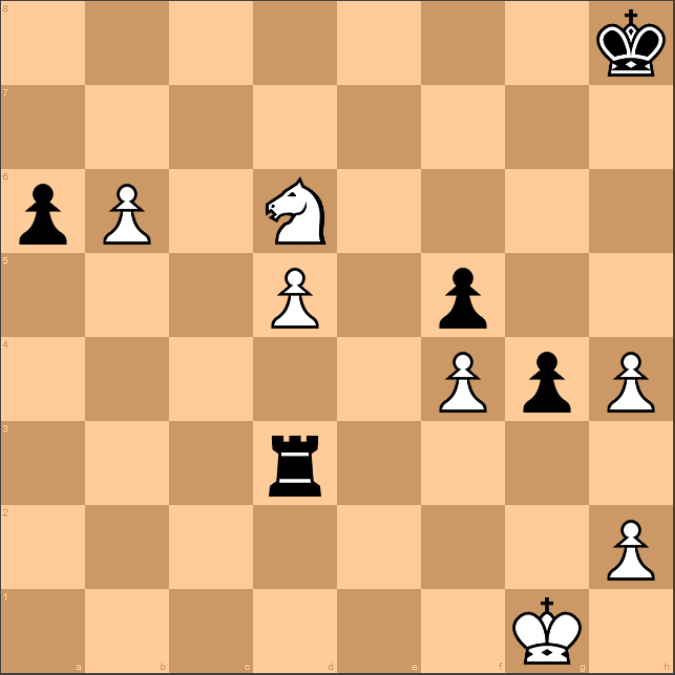 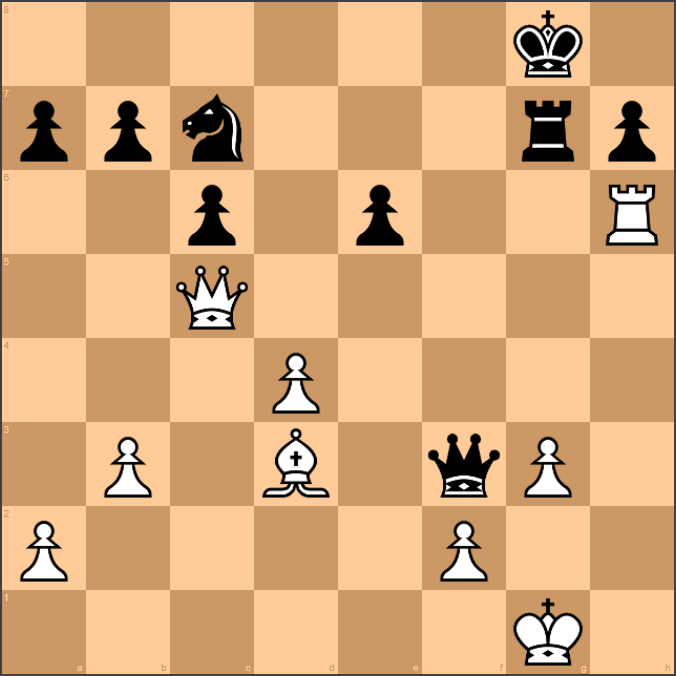 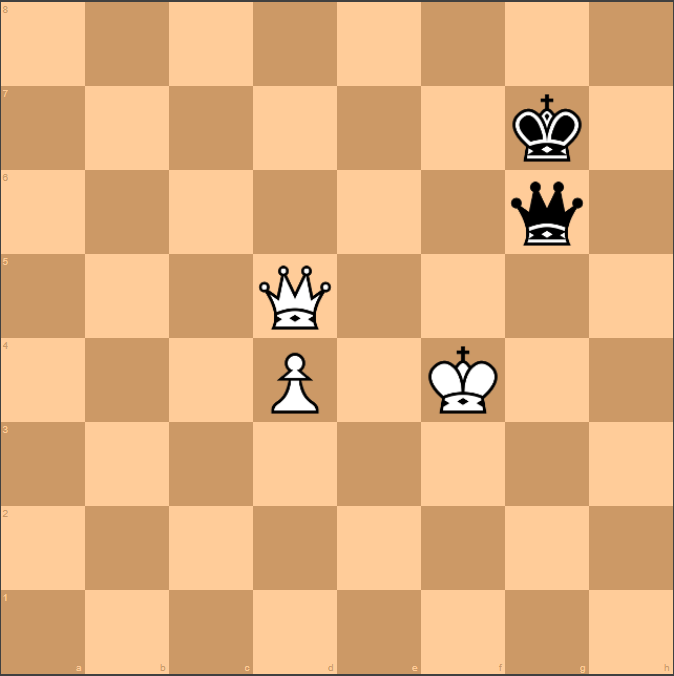 Black moves.  Can he trade the queens with 1…Qf7+? 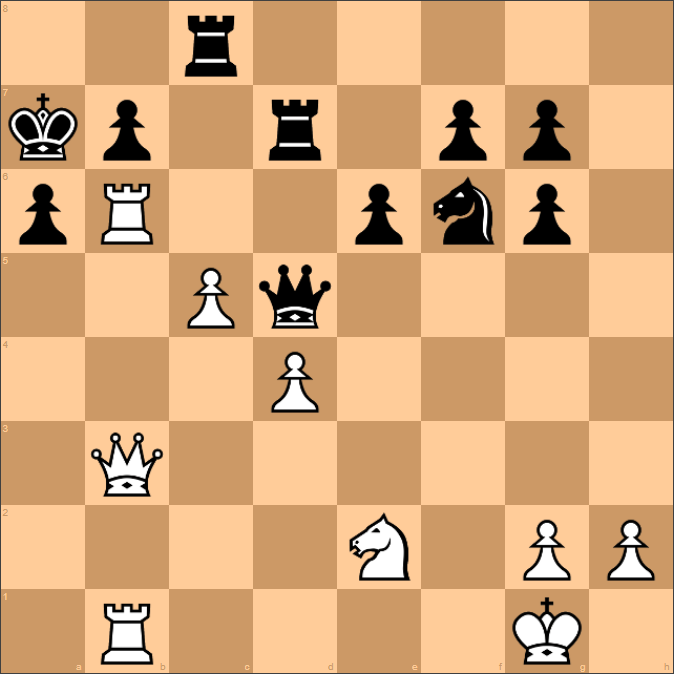 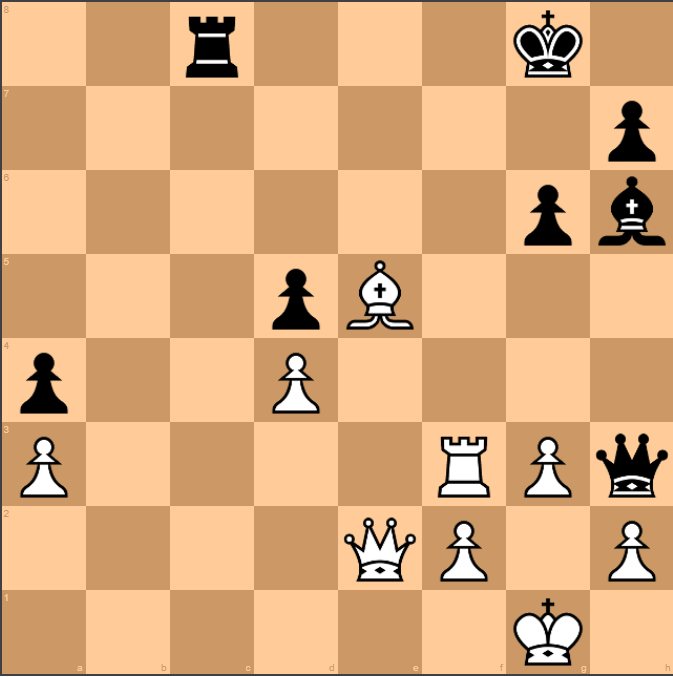 Sam Shankland Soars to the Top

American athletes are striving for gold at the Tokyo Olympics and have the focus of the world’s attention. Yet in Soci, Russia another American is bringing glory to the USA – the Bay Area’s own Sam Shankland. The World Cup started with 200 of the best players in the world and is now down to just eight. All of the other Americans have been eliminated, including an early exit by the number 2 player on the FIDE rating list, Fabiano Caruana. Sam has defeated former challenger Sergey Karjakin with the White pieces and seems set to advance to the semi-finals. He will be in the next Candidates Tournament if he can win that match and advance to the finals (the top 2 finishers of the World Cup become Candidates).

This performance is a tremendous boost to Sam’s career. Indeed, it may have looked like his chess career was fading away a few months ago. The United States had imported top ten players Wesley So and now seemingly Levon Aronian to add to the star power of Caruana. Then there is world #15 Lenier Dominguez who came from Cuba 2 years ago and super-GM Hikaru Nakamura, the world’s highest rated blitz player. This is already the top five players which make up the US Olympic team, and waiting in the wings is young Jeffery Xiong from Texas who is a 2700 player at only 20 years old. Thus at 29 years old it seemed Sam would never be able to catch up to the other top Americans.

The World Cup has drastically changed that. Sam’s rating has jumped to 25th in the world and he is close to becoming one of the eight Candidates for the next World Championship cycle. Caruana, So and all the rest have not qualified for the Candidates and there are only a couple of spots left. We may soon see Sam as the leading American hope to become World Champion.

Svidler is an 8 time Russian champion and a highly respected player by all the world's elite. He has beaten Carlsen a couple of times and would have been considered the pre-match favorite against Sam. 1.d4 Nf6 2.c4 g6 3.h4!? This move has been played several time before. It has ideas to get attacking chances when Black castles kingside, but Sam likely choose this to avoid 3. Nc3 d5, as Svidler loves the Grundfeld Defense and has tremendous experience with it. 3...Bg7 4.Nc3 d6 5.e4 Nc6 6.Nge2 0-0 7.f3

Faced with the dire threat of 1…Rc1+ Tal uncorked the brilliant “interference” 1.Bc7!! maintaining his material and positional advantage. Botvinnik could not take the bishop: 1…Rxc7? 2.Qe8+ Kg7 3.Qf8# and so found himself with little to play for: 1…Bf8 2.Qb5 Qe6 3.Be5 Qc6 4.Qa5 Ra8 5.Qd2 Rc8 6.Kg2 Qd7 7.h4 Qg4 1-0. Botvinnik resigned at the adjournment, perhaps prematurely, but his position is quite bad: 8.Qd3 sets up queenside infiltration with Qa6 combined with possible king-side action. A non-forced but fun continuation might be 8…Qd7 9.h5 gxh5 10.Rf5 and black is falling apart.