Round 4 of the TNM had some exciting games and matchups, with Richard Liu continuing his strong TNM run with a draw against NM Siddharth Arun. Liu was able to force a draw in a rooks and pawns endgame despite being down 3 pawns. Christophe Bambou grinded down a bishop and pawns endgame to defeat Andrew Guo on board 2. Nicholas Weng and Kristian Clemens also got wins in the top section. Arun, Abhi Penagalapati, and Richard Liu lead the section with 3/4. 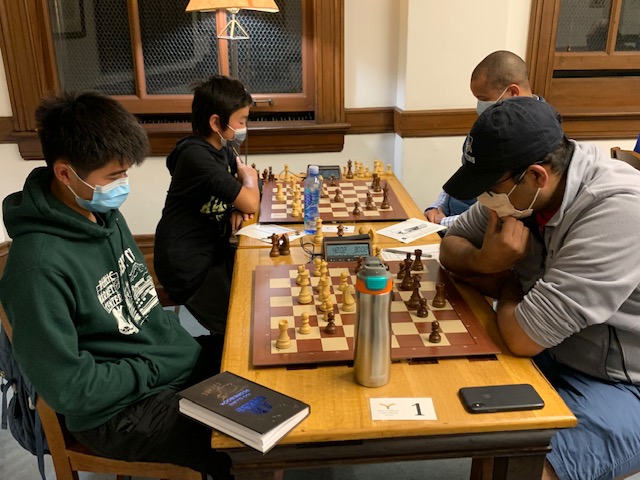 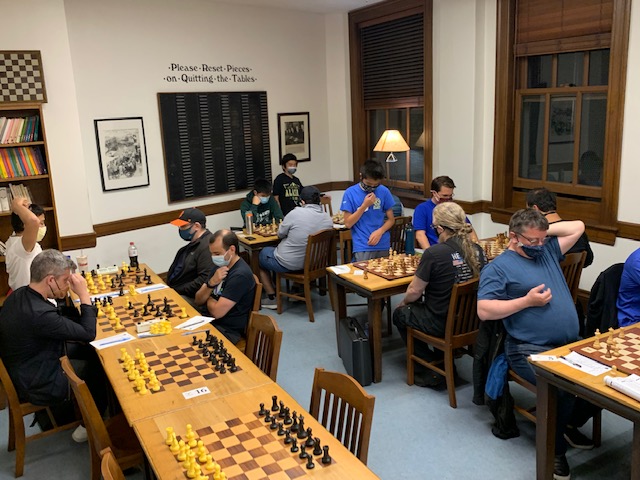 In the under 2000 section, Samuel Bownlow continue to lead the section after a victory over Adam Stafford, and Leon Quin got a fine win against an always dangerous Adam Mercado. Daniel Perlov drew with Luiz Uribe and Amitoj Singh won a quick game against Albert Starr to round up the top scorers in the section. Kevin Sun had a bye in the 4th round, so he and Samuel Brownlow are in the lead with 3.4/4. 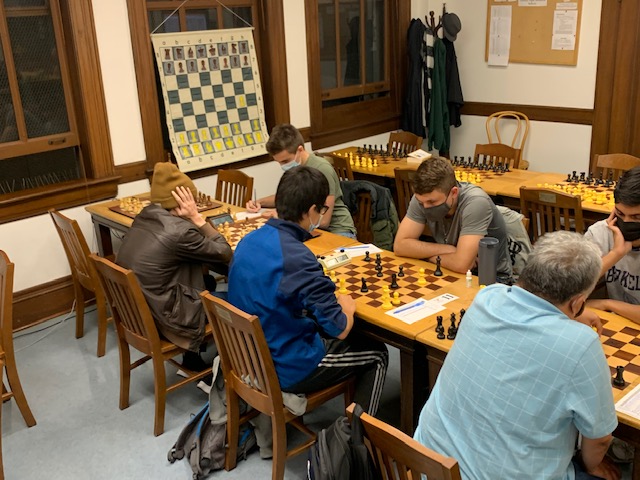 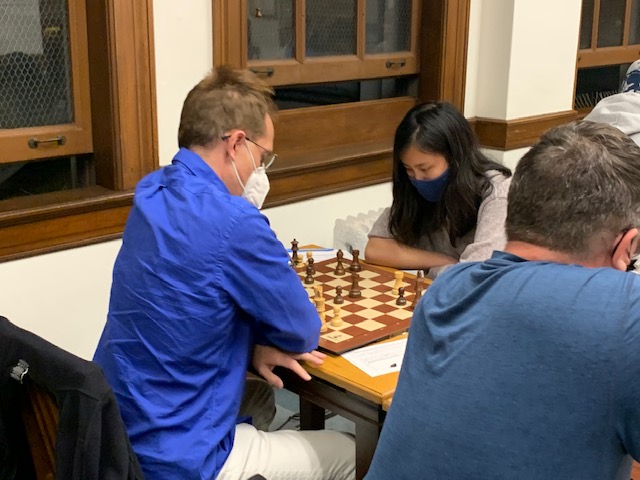 In the under 1600 section, Isaac Sterling is the only perfect score left in the tournament after winning against David Nichol. Some strong competition is lurking close behind, including Paul Reed who is only a half point behind.

As we did last week, Paul and I ventured into North Beach prior to the start of the TNM. Jude Acers emailed me about visiting Cafe Trieste, where he said he saw Francis Ford Coppola work on drafts of the Godfather there many years ago. Paul told me also it used to be a popular chess hangout, so we headed out. 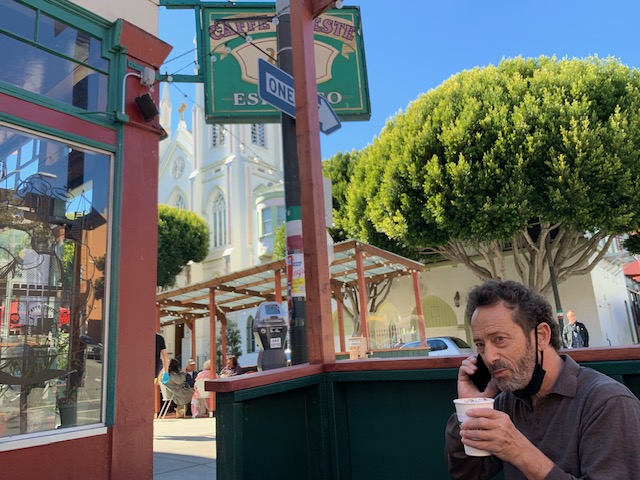 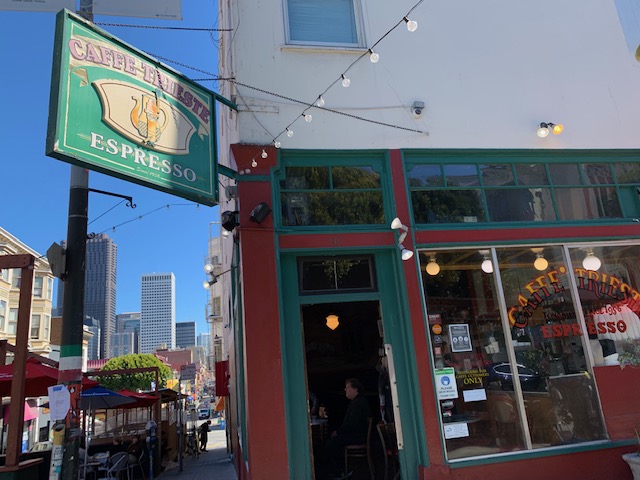 I had a latte with one sugar and chocolate spinkled on top and Paul had his usual cappuccino. There is plenty of space inside if people ever wanted to head there to play some blitz while enjoying drinks. The inside walls are lined with pictures for people to enjoy its history and it definitely has that classical feel. The outdoor space is great as well. 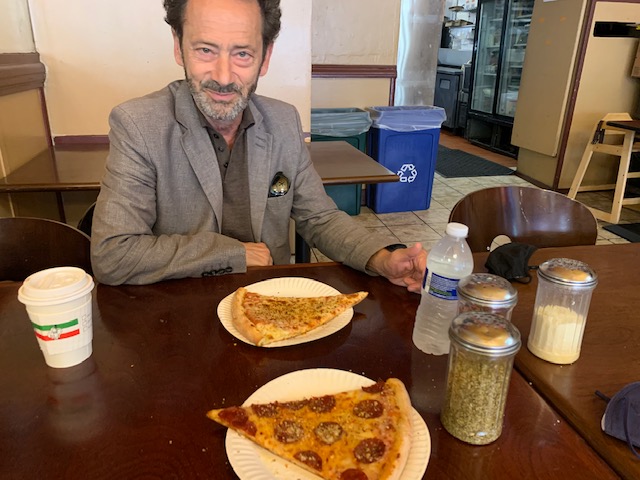 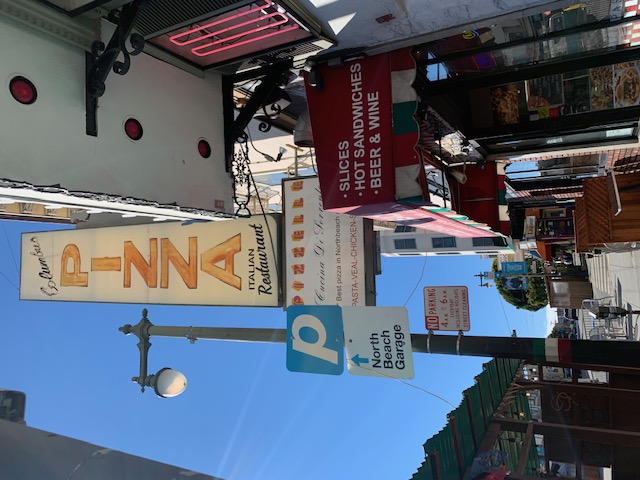 We made our way back to Mechanics' Institute to get ready for the start of round 4, but not before stopping by Pizzelle di North Beach for slices of cheese and pepperoni. It was nice to get a quick slice, with parmesean, chili flakes, and oregano as condiments while watching Grand Torino on the TV inside.

Next week we will again tackle the local cafes and San Francisco street chess hotspots, seeing if we can spread the message of bringing communities together through chess and food and reviving the once great street chess culture of San Francisco through the Mechanics' Institute.

Here is the link to the broadcast: https://www.youtube.com/watch?v=eztHVCrEwhs

The Thursday Night Marathon was broadcast live from the US Open, and it was a fun evening which included special guests WIM Dr. Alexey Root, Joshua Anserson from the Chess Journalists of America, and NM Evan Rabin from Premier Chess, all of which joined me live on the broadcast. GM Gadir Guseinov showed his dominance again with a positionally masterful performance against IM Bala Chandra Dhulipalla. NM Michael Walder was able to hold Guseinov to a draw, and both Guseinov and Walder lead the tournament with 3.5/4 with 4 more rounds of play remaining.

Incidentally, I arrived at the hotel late Wednesday evening in New Jersey as go to the elevator to head to my room, and I ran into Henry Deng and his dad. I congratulated him on his championship, after directing an event where he beat IM Josiah Stearman just a week before. This kid has some talent! 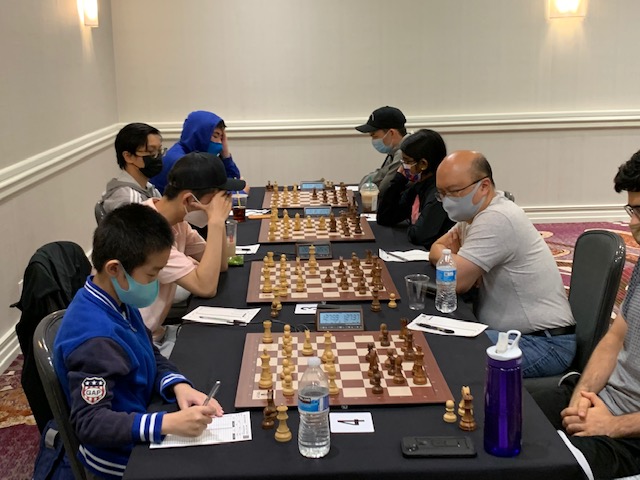 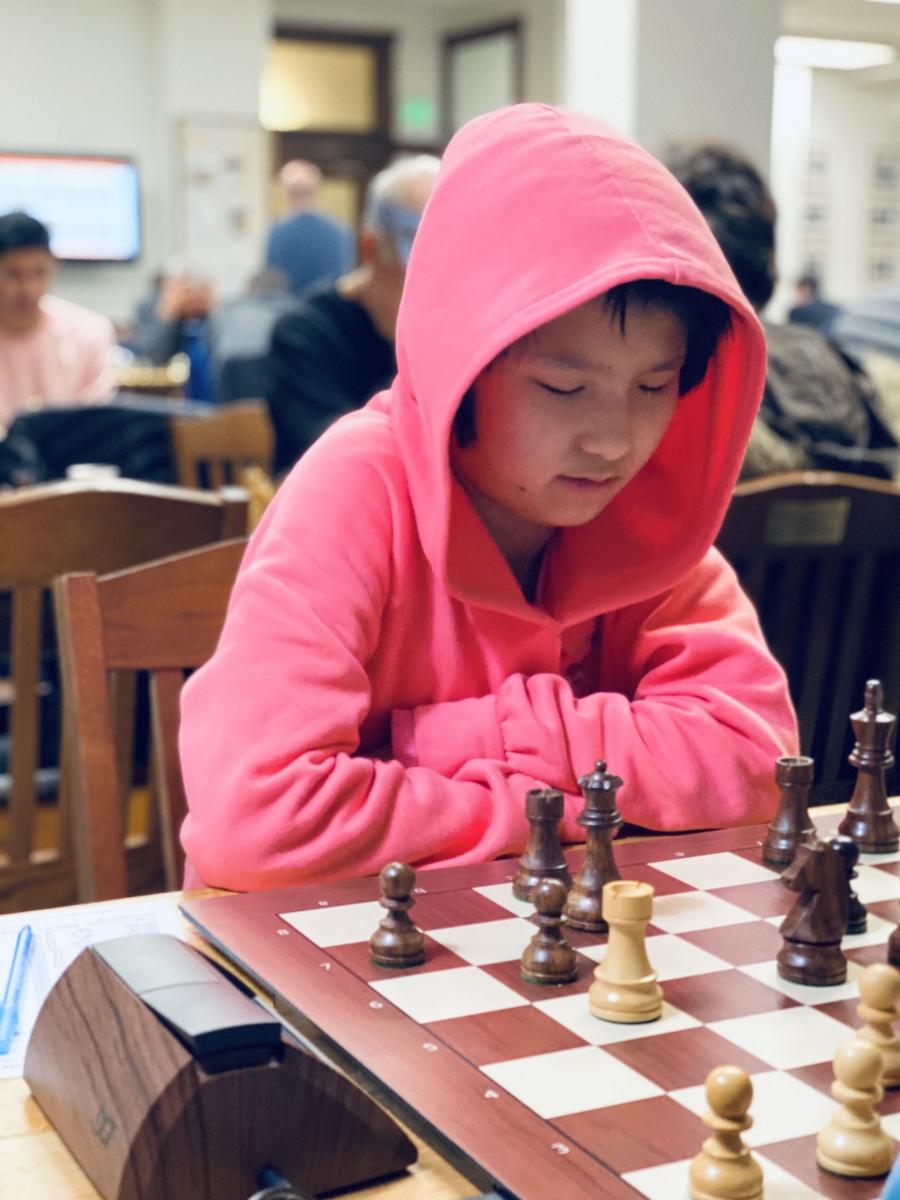 Henry Deng (left) and Ruiyang Yan (right) are among the new crop of national champions after winning their respective champion of champions events at the US Open in Cherry Hill, New Jersey

It is fun to come to the US Open literally on the other side of the country and still run into Mechanics' Institute players from the Bay Area. Here are some pictures of some local talent at Mechanics' east in Cherry Hill. 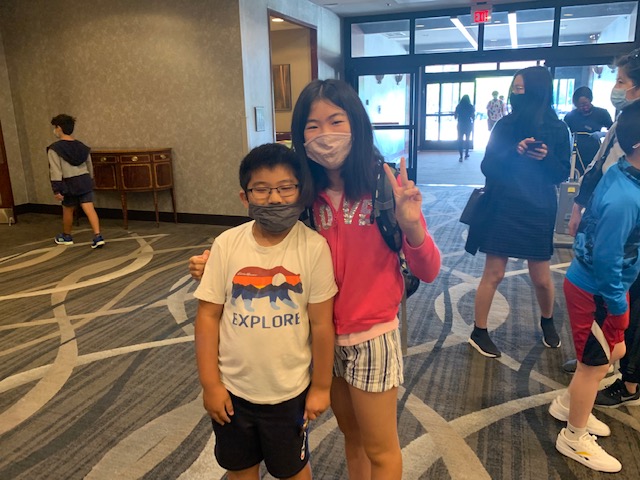 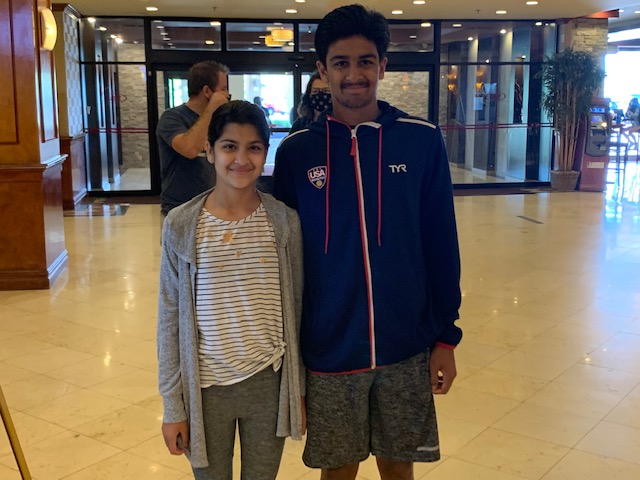 Ethan and Ella Guo (left) made the trip to Cherry Hill to play the main event, as did Omya and Vyom Vidyarthi. Vyom won the Barber Tournament of Middle School Champions and Omya finished tied for 3rd at the 2021 US Women's Open. 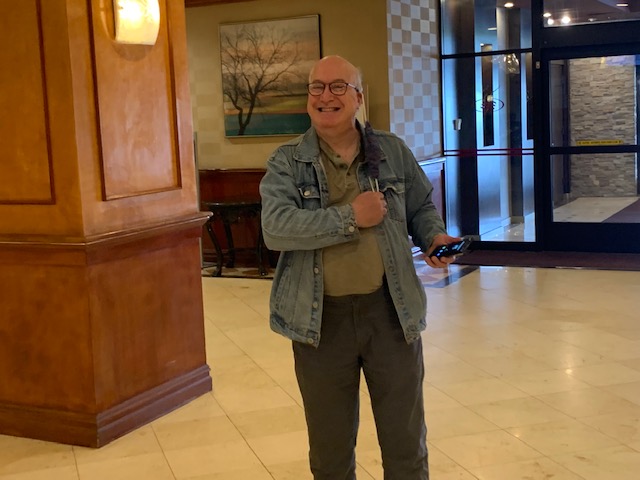 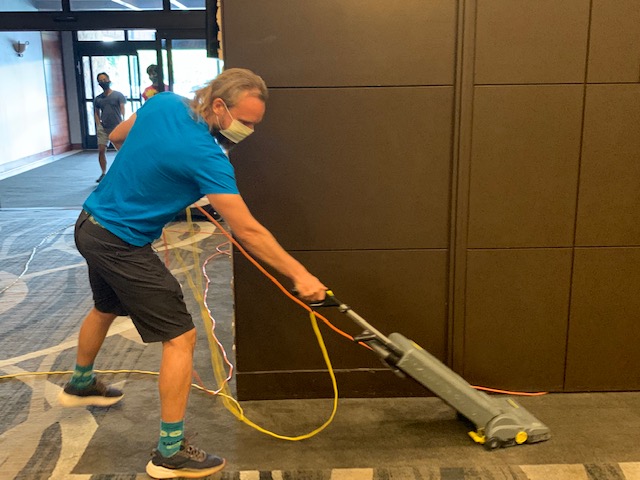 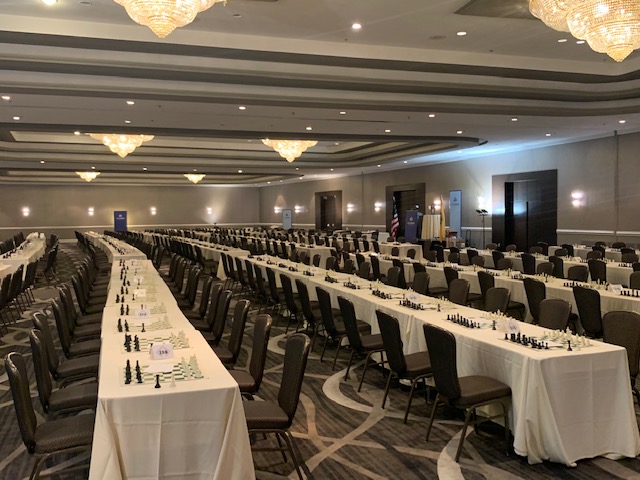 Inside the main playing hall at the 2021 US Open

WIM Dr. Alexey Root has a newly released article on Chessbase online regarding the Northern California victory over Texas in the tournament of state champions at the US Open. Get her take on what had to be a difficult article to ride from the University of Texas at Dallas Instructor by following this link: https://en.chessbase.com/post/northern-california-bests-texas

I want to thank Alexey for being my partner on the Thursday Twitch broadcast live from the US Open!

We had previously written that we expected some OTB rules to be forgotten, or at least players would need a refresher in certain instances since it had been so long since we had over the board play. Here is one example, and it happened in two different live OTB events less than a week apart at the Mechanics' Institute. How do you offer a draw according to USCF rules?

How you offer a draw is regulated, here is the rule:

14B1. Proper timing of draw offer. Except for a draw claim, which is an implicit draw offer (14), a player should make a proposal of a draw only after determining a move (9G) and before pressing the clock. The opponent may accept the proposal or may reject it either orally or by deliberately touching a piece (10B). In the interim, the player who made the offer cannot withdraw it. See also 9G3, Draw offers.

What happened in both games in question is that the player offering the draw did so on their own time, but before making a move on the board. In one case, the offer was made by a player in an inferior position while the opponent had seconds on the clock. The player then made a move on the board, but then the player had a brief second of confusion as he was processing whether the offer was valid. While this happened, he ran out of time and lost the game. The player who ran out of time does bear some responsibility, but clearly what happened was not the correct way it should have happened. In both cases, there did not seem to be any ill intent. According to the rule however, the offer is binding regardless of the circumstances. I reminded players before the start of the TNM round that if there is an apparent rule violation or question about the rules, players may pause the clock to find an arbiter. In any moment of doubt, please immediately call on an arbiter to assist. And yes, there are penalties that can be levied to players who pause the clock under the guise of finding an arbiter with a question that was not necessary.

So if you want to offer a draw, offer it BEFORE you press the clock on your own time, then make the move on the board, and then hit the clock.

I urge players to familiarize themselves with the USCF Rulebook HERE. 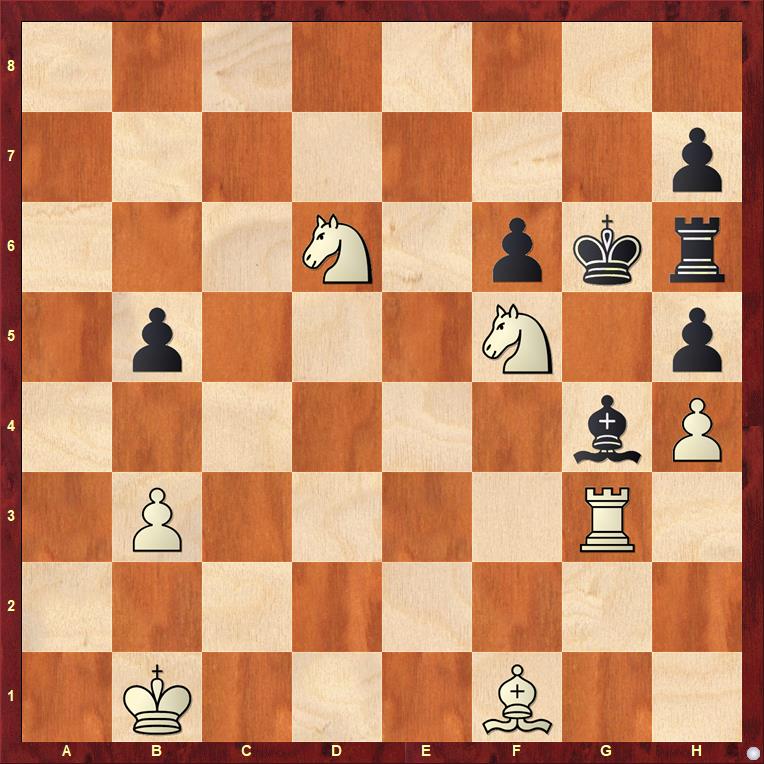 White to move and mate in 3

Paul's column will return next week

The FIDE World Cup has reached its final match as all the players have lost except two. The actual first place finish is not so important – the great prize were the two spots in the next Candidate’s Tournament. Those go to Poland’s Jan-Krzystof Duda and the Russian Sergey Karjakin, who are now facing off in the finals. Duda’s path in getting to the final was not likely, as he had to win in the semi-final match against non-other than World Champion Magnus Carlsen. Magnus had easily dealt with his opponents in the first 6 knock-out rounds and was certainly the betting favorite. Duda managed to hold two draws in the classical chess games, then struck with the black pieces in rapid chess to down the champ. We show below this important encounter which will tremendously boost the career of the talented young man from Poland.

Karjakin had a much more straightforward time in the semi-finals, due to a powerful performance with the White pieces in the classical chess game. Indeed, one could say that Karjakin had a very smooth journey to the finals and the precious Candidate’s spot if not for the epic battle he had with Sam Shankland. Sam won the first game of the classical time control, forcing Karjakin to come back with a win of his own to make it to the rapid time control. Sam again won the first of the two rapid games, but Karjakin was lucky to come back and take the second rapid and move on to blitz. Sam finally went down in the blitz, so we must credit Karjakin for his cool nerves and fighting spirit. Sam showed though that he can play level with the best in the world and we hope that he will be encouraged to continue his quest to bring glory to chess in the Bay Area...

The position looks very complicated as White must lose the knight back. Karjakin shows he has everything under control. 30.Kg1 Qxf4 31.d5! Qg3 32.Re2 guarding the g2 pawn allows the terrible white center pawns to advance. Material is even yet Black has no salvation. 32...Qg5 [32...Qd6 33.Bxf5 Qxd5 34.Qxd5 Bxd5 35.e7 wins the exchange at least with an easy endgame win] 33.Qd2 Simple and powerful. In either the endgame or middle game the white center pawns will win a piece. Black resigned. 1-0