The Tuesday Night Marathon got off to a great start from the early morning on Tuesday. I noticed leaving the parking garage and walking towards Market Street that my favorite cafe had just reopened after nearly a year and a half: Mazarene at 720 Market Street. Previously I would peer at the cafe from a distance on my way to Mechanics' Institute, and it would always be dark, though the signs and equipment inside remained there, so there was always hope. 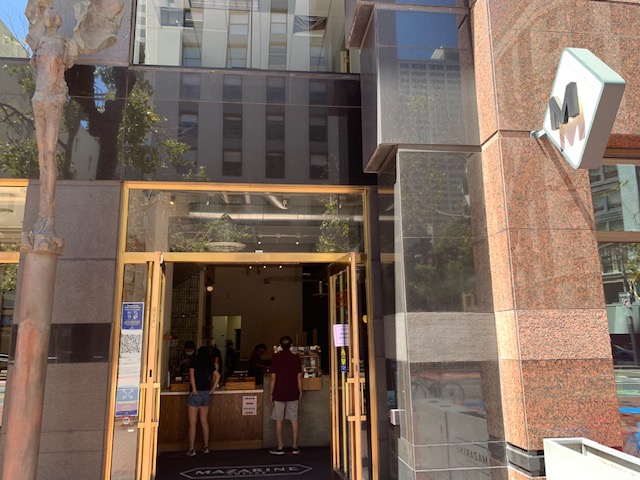 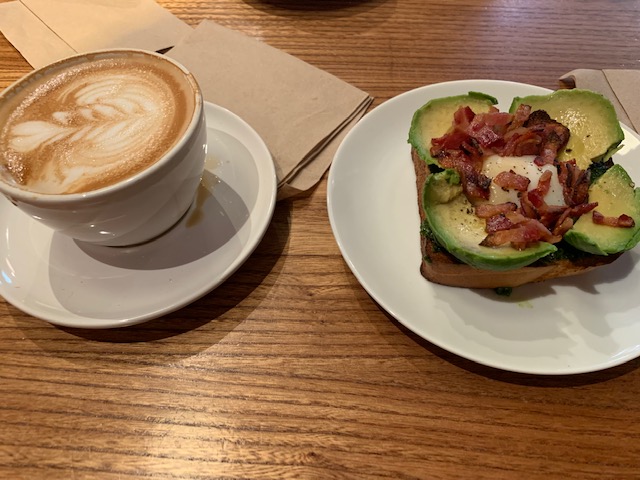 I usually get a latte, which they make to near perfection with a light sprinkle of sugar on top. My favorite breakfast of theirs is the avocado, bacon and egg toast, with pesto spread. The combination is a great treat to start a long day.

Now to the chess action. NM Siddharth Arun got a big win against a player that has been on fire lately, defeating Abhi Penagalapati. Richard Liu continues his fine TNM performance, holding IM Elliott Winslow to a draw. Christophe Bambou also is still in contention with a win over Kristian Clemens, potentiall setting up a big 6th round match next week between he and Arun for the top spot. Arun leads the section with 4/5, with Bambou and Liu right behind at 3,5/5. 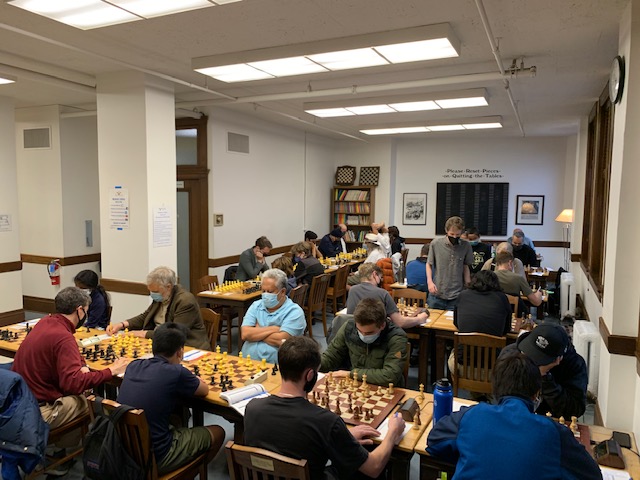 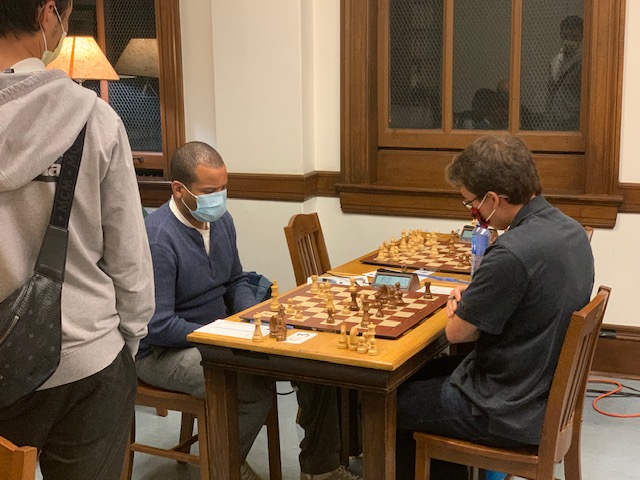 View from inside the chess room during round 5 of the TNM. Christophe Bambou is shown playing white against Kristian Clemens

In the under 2000 section, Leon Quin and Luiz Uribe battled it out in a very tense game that went late into the evening. Just as it appeared Uribe was breaking through, winning material and gaining an advantage, Uribe blundered with under a minute left on his clock, getting his king and queen forked, and turning the tide of the game in Quin's favor. He certainly deserved better, such is the case when time pressure enters the mix. Kevin Sun remains on top of the section however, trapping the queen of Samuel Brownlow and getting the win. Kevin is in sole 1st place with 4.5/5, with Leon Quin and Adam Stafford right behind at 4/5. 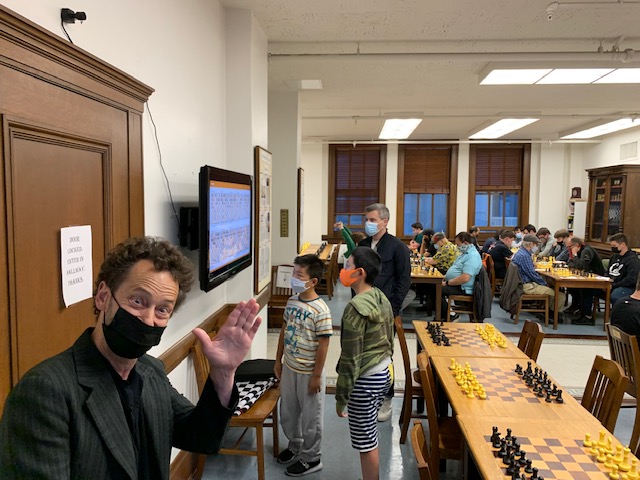 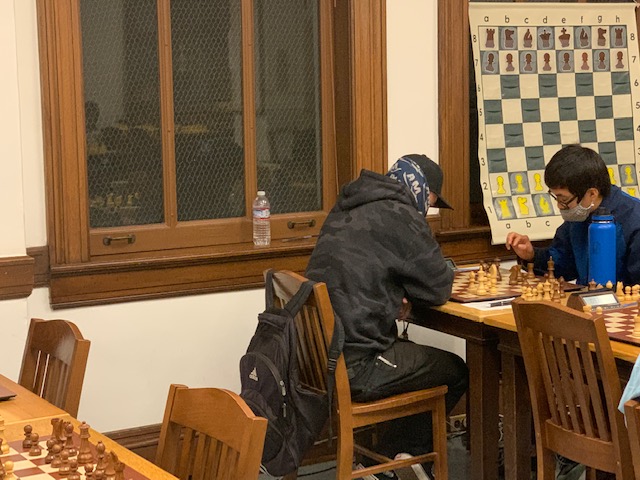 FM Paul Whitehead having a little fun at the start if the round, as some players watch the screen of the 10 DGT board broadcast. Luiz Uribe and Leon Quin did battle in an epic game on board 9

In the under 1600 section, Isaac Sterling is running away from the field after another win against Paul Reed. He is a full point ahead of the field at 5/5, with Sebby Suarez, David Nichol, and Claudio Bastiani-Fonck right behind at 4/5.

Here are some game from the round, annotated by GM Nick de Firmian.

1.d4 Nf6 2.Nc3 An old move, firmly sidelining the c-pawn for the moment, is on the resurge, especially in the London System where it is the Jobava Variation. 2...d5 Black squarely stops e2-e4, well... 3.Bf4 The Jobava. [3.e4 The even older Staunton Gambit, thought to be suspect these days.; 3.Bg5 is the less ancient Veresov System, still unrefuted (and why would it be?)] 3...a6!?

The Thursday Night Marathon did not have major upsets at the top, but IM Bala Chandra Dhulipalla delivered the evening's action in both games, first against NM Michael Walder and then an action packed game against Nikunj Oza. Here is the link to that game if you would like to watch it: https://www.chess.com/live#a=57906

GM Gadir Guseinov leads the tournament with 5.5/6, a half point over Dhulipalla at 5/6. NM Mike Walder right behind in sole 3rd place with 4.5/6.

GM Alexander Lenderman won the 2021 US Open outright with a score of 8.5/9 and the $8000 1st prize. He went into the final round 8/8 and a full point ahead of the nearest player. The weekend was buzzing whether or not Lenderman would take down the US Open with a perfect score, but he needed only a draw to secure clear 1st. Although making history is incredibly tempting, securing 1st was the goal, and he did so with a final round draw against GM Benjamin Gledura. Congratulations to Lenderman, who has participated both in our Tuesday and Thursday Night Marathons online! I was able to capture this photo of him  playing GM Hans Niemann. 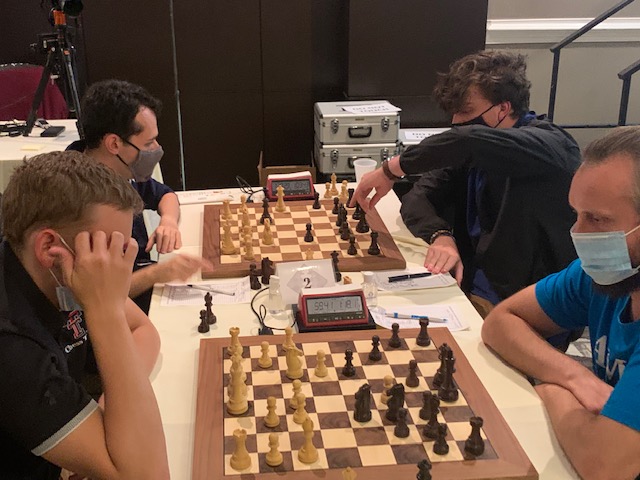 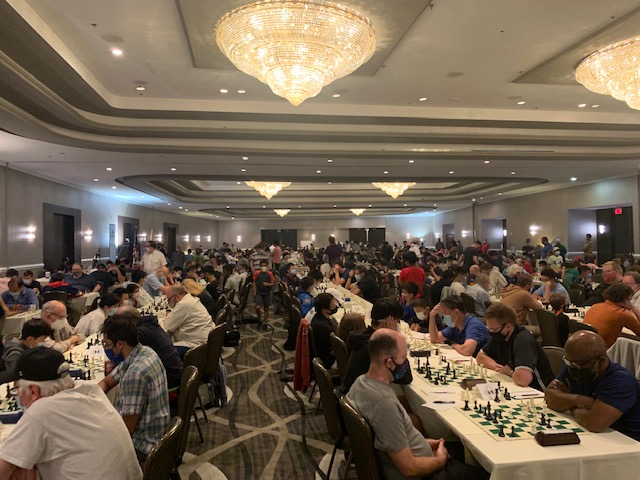 GM Alex Lenderman is playing white against GM Hans Niemann as Niemann is about to make a move. This game is annotated in Alexey Root's article by NM Mike Walder later in this newsletter. GM Timur Gareyev is playing black next to them

Another part of the US Open festivities is the annual awards. I was the recepient of this year's Organizer of the Year award from US Chess. My good friend from the Bay Area Lauren Goodkind also received an award from US Chess for Meritorious Service for her work in the community promoting women and girls in chess. 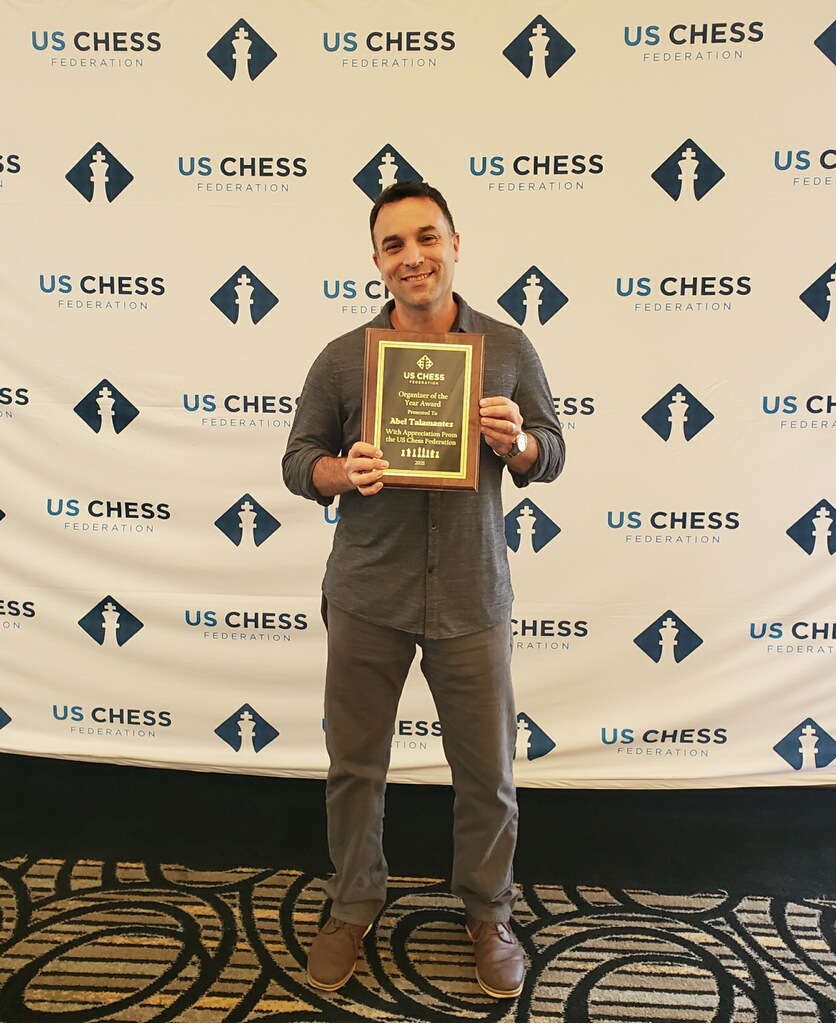 While it was fun being at the US Open and following the action of the games and connecting with people, I was able to take a few ours and go into Philadelphia, where I got to see the Liberty Bell and Independence Hall while taking some time for lunch and have an authentic philly cheeseteak. That's mozzarella cheese in case anyone is wondering. 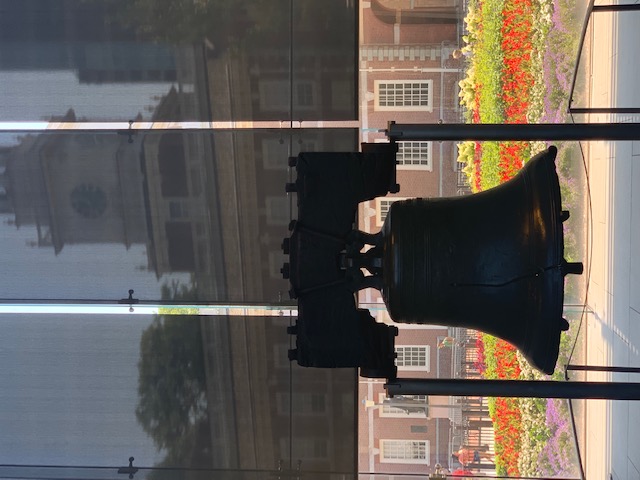 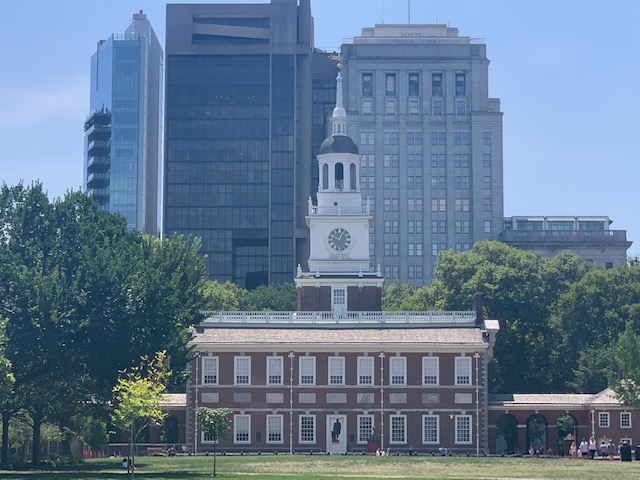 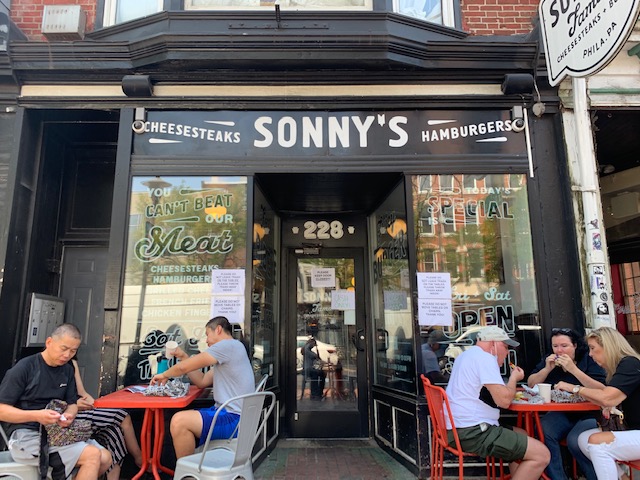 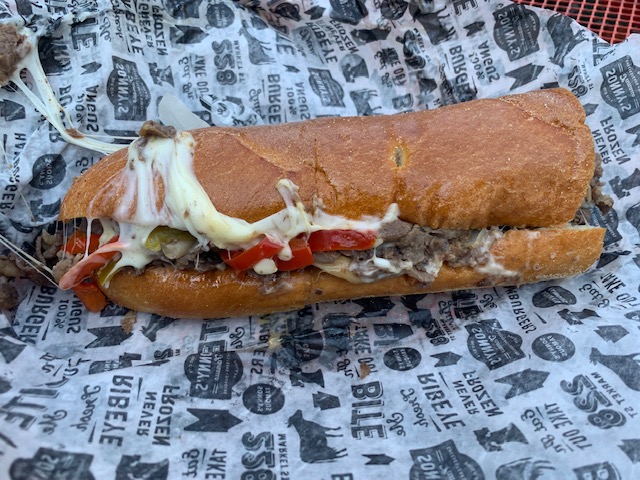 Congratulations to GM Alex Lenderman on the championship win, and it was great to see everyone from the Bay Area community in Cherry Hill! 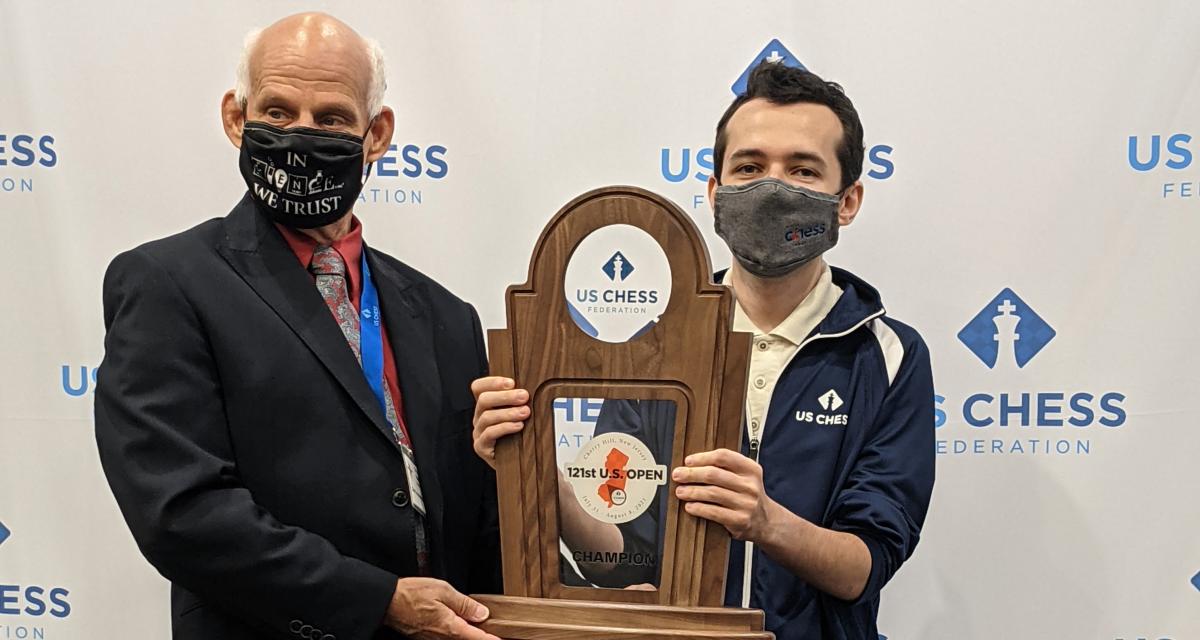 Here are the US Open final results: https://www.uschess.org/results/2021/usopen/

WIM Dr. Alexey Root wrote a US Open recap article for ChessBase, you can read it by following this link: https://en.chessbase.com/post/u-s-open-chess-games-awards-signings-meetings 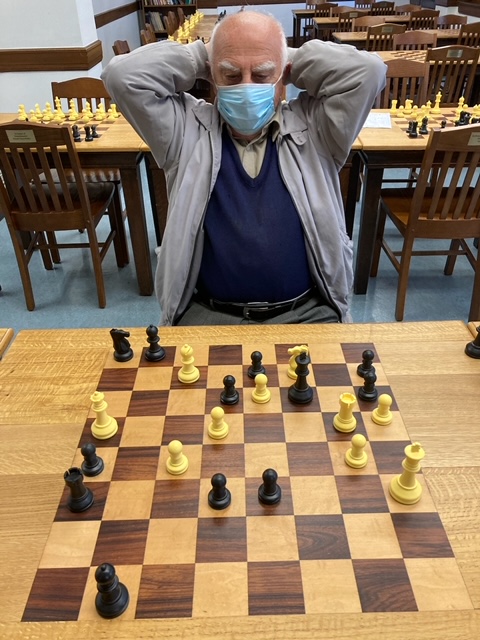 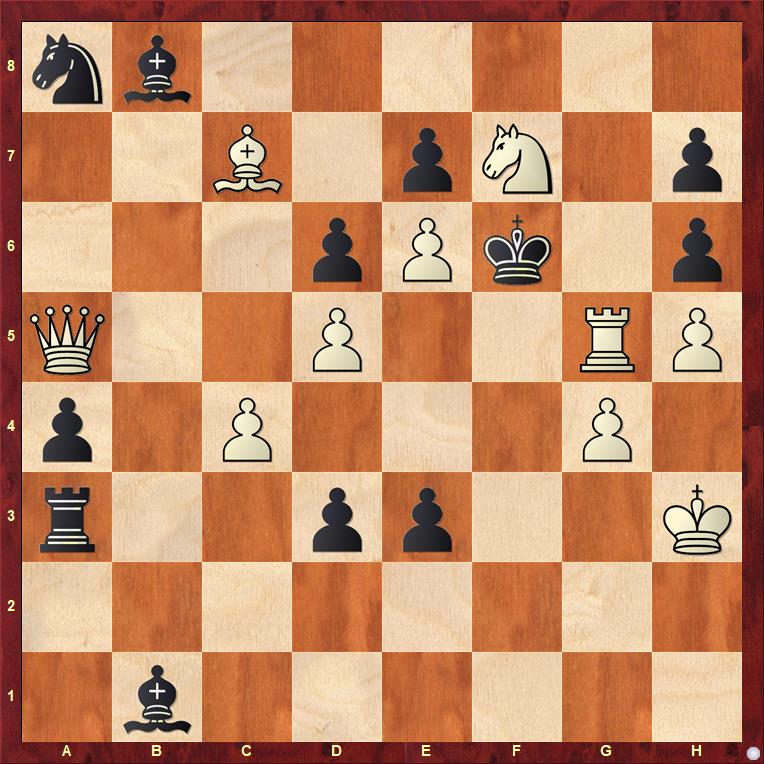 Finishing Tactics from the World Champions 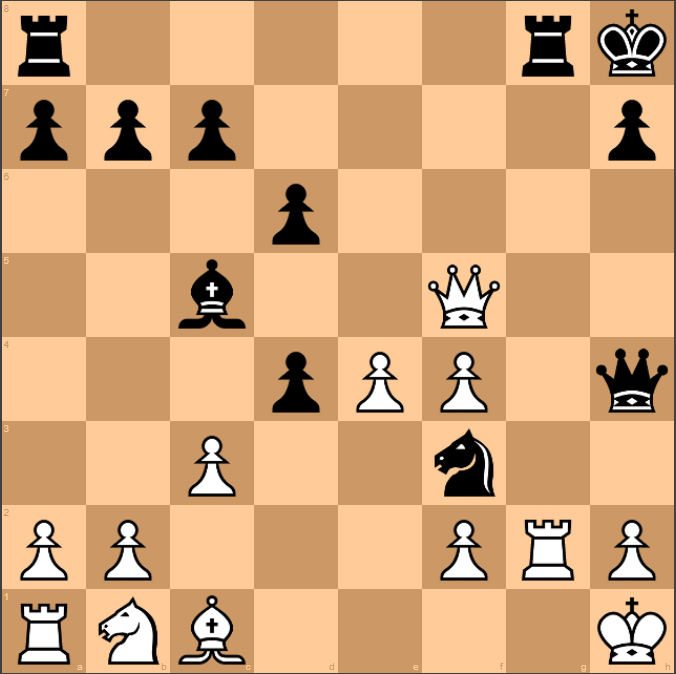 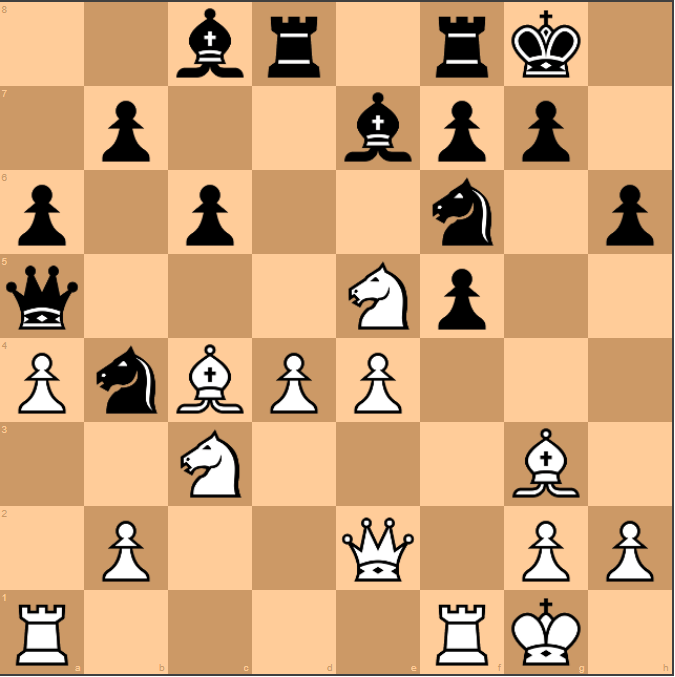 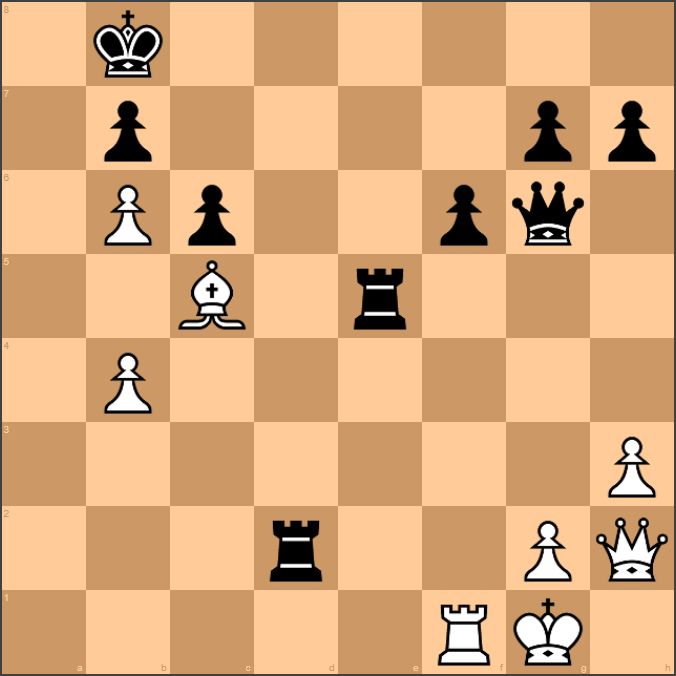 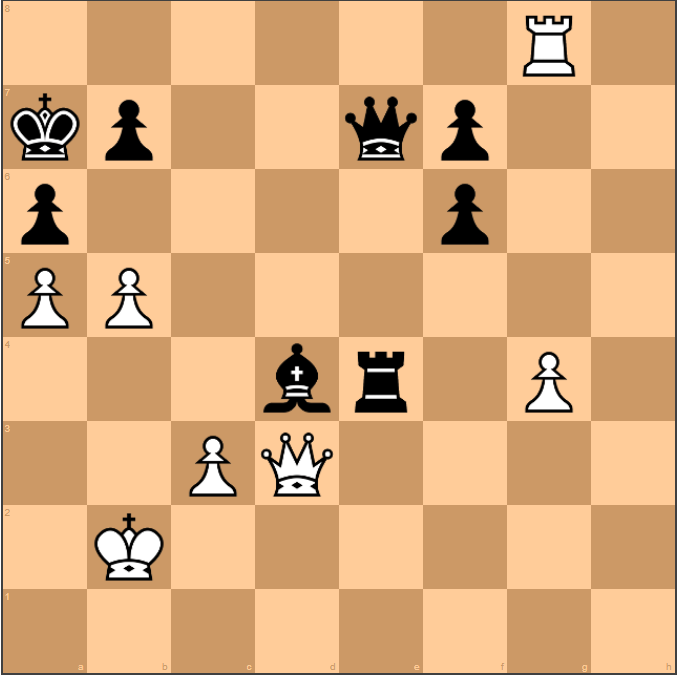 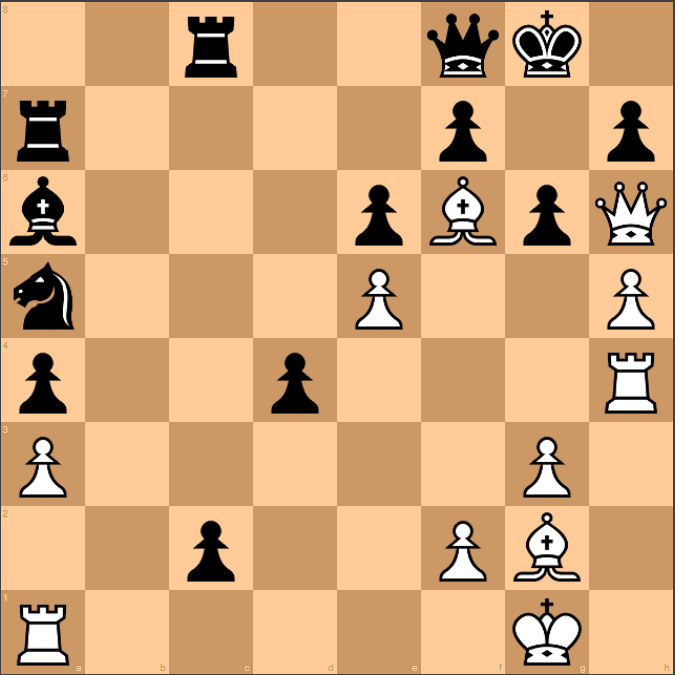 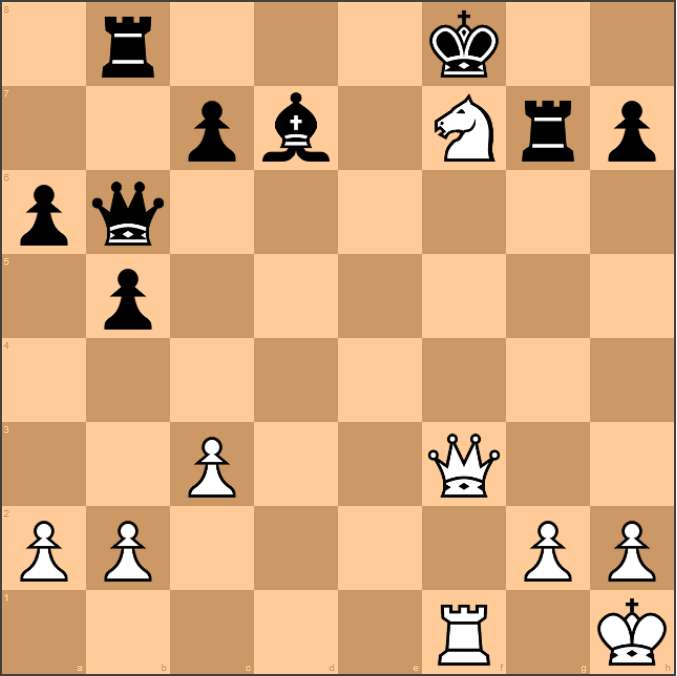 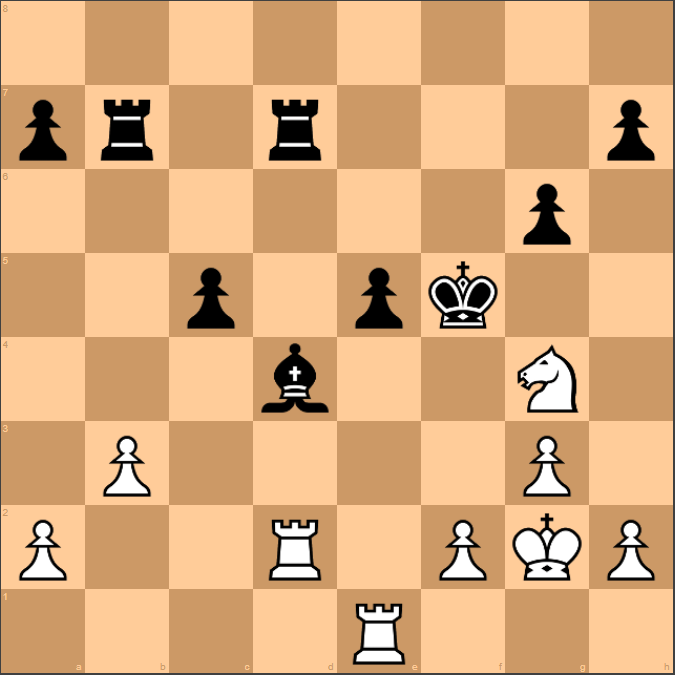 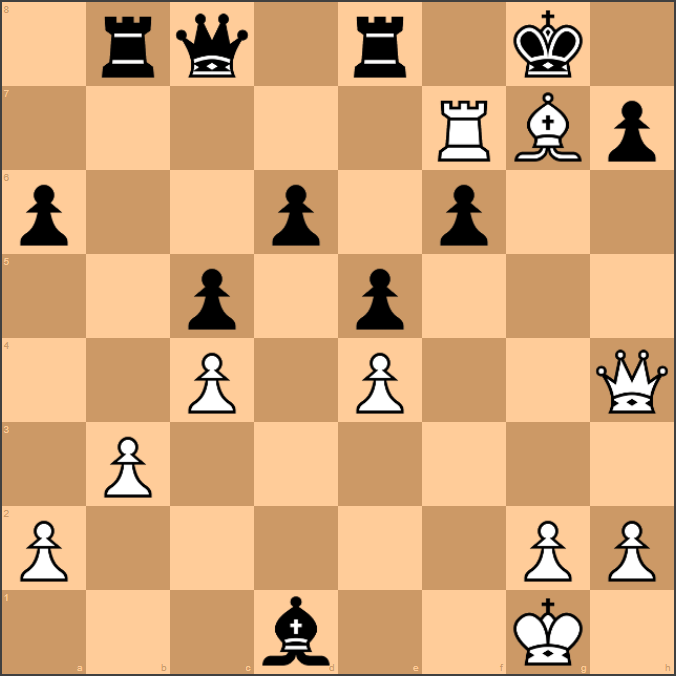 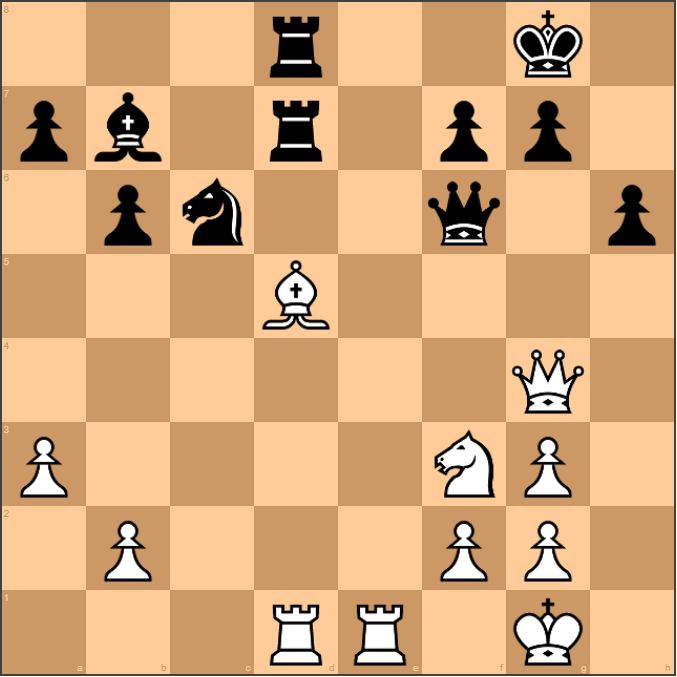 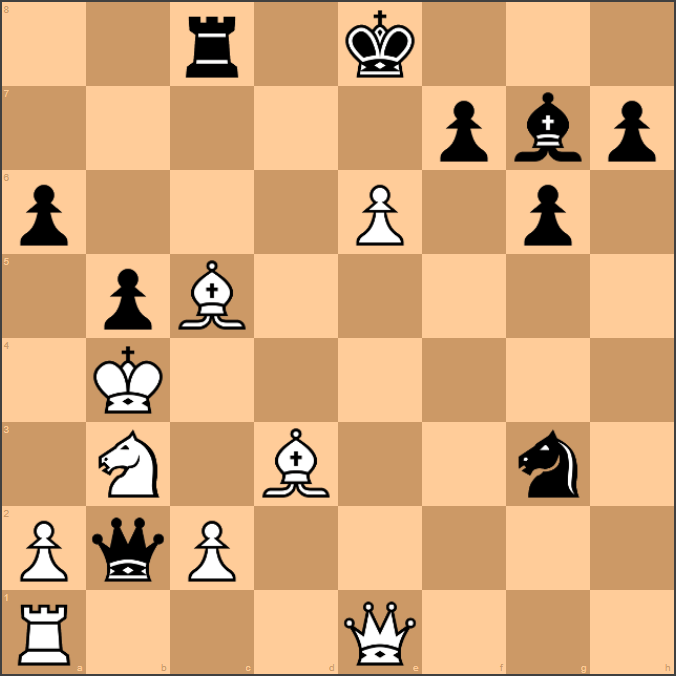 Who’s on Top in America?

The Sinquefeld Grand Chess Tour in St. Louis has started now with a super field of ten top players of the world. What is amazing at this time is that six of these players are Americans, showing the dramatic rise of top level chess in the US. The question though is which one of the Americans is the top dog? That seems to be very disputable these days. The last few years had seen Caruana as the clear top American since he was world #2 and challenger to Magnus’s throne. Yet Fabiano has slipped a bit with his rating now under 2800, and Ding Liren has edged him out for the #2 rating spot. Wesley So could make a strong claim to be the real threat to become an American world champion as he is already world champion at Fischer Random Chess, having smashed Carlsen in the final. The rapid matches Wesley has had this year with Carlsen have been evenly split and closely fought. This would give him great bragging rights except that his rating is only #9 in the world and he hasn’t qualified for the Candidates Tournament (which has only 2 spots left). Thus Wesley may not get the chance to battle for the title now matter how well he does against Carlsen.

There is always the argument to go with the young, promising talent no matter what sport you are in. Here Jeffrey Xiong wins the argument as most promising American as he is 2700 rated and only 20 years old. The other five Americans we are considering are all in the late 20’s or 30’s. Maybe it will be Jeffery’s time to make a move and show the US how promising he really is. Speaking of making a move, our own Sam Shankland has shown in the world cup that he takes a back seat to no one. Though Sam is 29 he seems extremely focused and motivated.

We consider also the players in their 30’s. The world’s #1 rated blitz player (and #3 rapid) is Hikaru Nakamura. Naka is still ready to rumble with anyone, particularly in fast chess, yet his drive to become world champion seems to have waned. His energy seems more directed to becoming an internet influencer than planning a championship run. The 6th American in the tournament is world #13, Lenier Dominguez. Dominguez is a super-grandmaster who will beat anyone on a good day, yet still needs to step up a bit if he would play for the title. We give below a couple of games from the St. Louis event, which may show us who is striving now to be top dog.