For those that don't know, I lived for a little more than three years in Albany, a city right next to Berkeley, when I attended UC Berkeley from 1999-2002. For many years after, I would come back to Berkeley and visit the campus, and also went to some of my favorite spots. Tops among those were Picante, a Mexican restaurant by University Village, and Zachary's Pizza, with its deep dish mushroom and spinach. It had been quite some time since I had visited Berkeley for fun, and I got the opportunity to do that this past week as I met with my predecessor IM John Donaldson at Espresso Roma Cafe off of Hopkins. What stood out about this place, in addition to the fine latte, was its quiet suburban feel amidst the busy streets. Parking was plentiful (not something easily found in Berkeley), and the ambiance was very enjoyable, an outside seating area busy with people. One older gentlemen seated by us was yelling on speaker phone with someone that they were ruining his cappuccino by being on the phone. It was a valuable and enjoyable couple of hours of conversation, and I do reccommend a visit to this cafe if you are ever in Berkeley. They have a delicious looking selection of food and the outdoor area is a great environment to unwind. 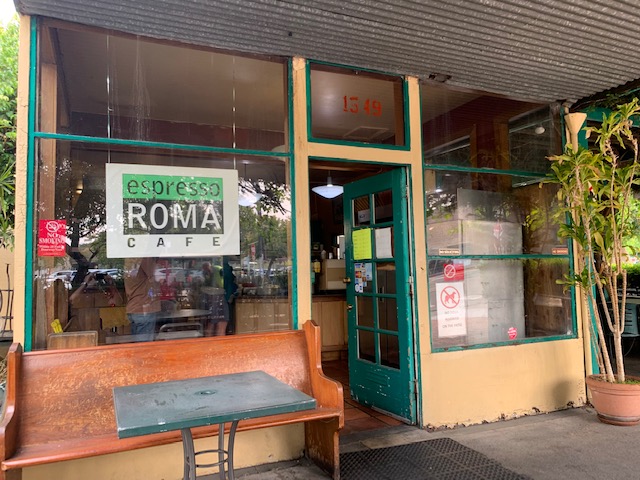 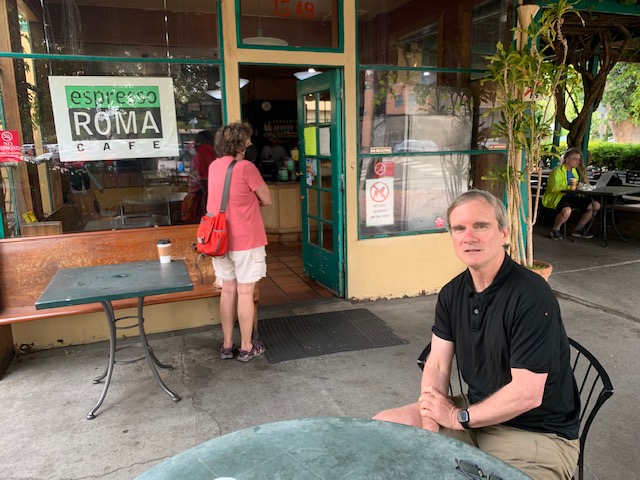 After, I swung by Emeryville on my way back home to San Jose hungry, and I had to go with simple, but simply good. I stopped by Super Duper Burger for a mini burger combo with garlic fries. It hit the spot, and took my mind off the fact that I had a dentist appointment an hour later. Fortunately I was able to teach my MI member beginner's class in the evening, despite half my mouth still being numb. 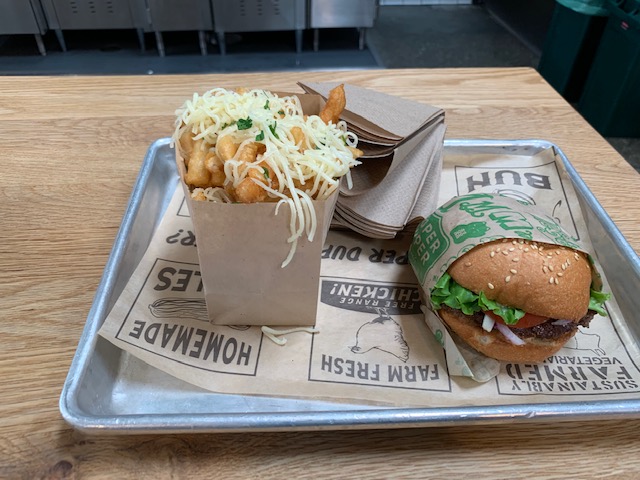 A very busy day, but a great day sans the dentist.

The Tuesday Night Marathon delivered perhaps the most exciting game of the tournament and perhaps the year thus far, even as three of its top players took byes for the round. The action was delivered on board 8 in a battle between David Rakonitz and Teodoro Porlares that left GM Nick de Firmian and myself glued to the game to the point that we skipped our planned break from the broadcast to continue coverage. The game was an ode to club players everywhere, and is was a game where the element of extreme complexity mixed with the daring and fallability of under 2000 players added high drama. This game is annotated below, and it is definitely worth a look. While we all appreciate the skill and precision of the top players, the night belonged to these club regulars, as they showed there can exist beauty and passion amidst chaos. 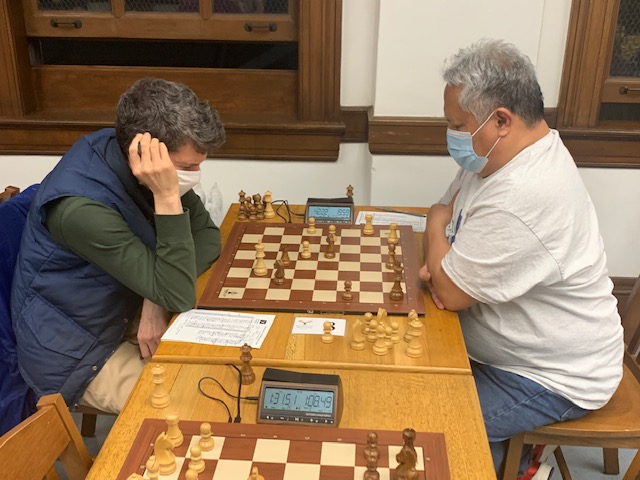 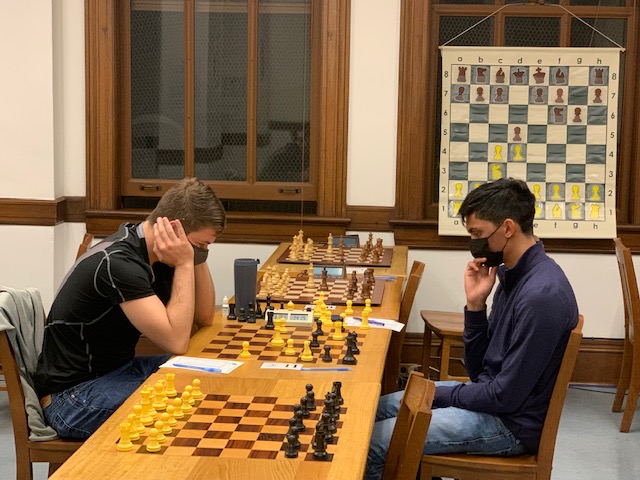 In the top section, NM Siddharth Arun had requested byes in the final two rounds, and thus has secured at least a share of 1st place with a final score of 5/7. IM Elliott Winslow defeated Christophe Bambou, so Winslow is the only player in position to share 1st place with Arun with a victory in next week's final round. Richard Liu has 4 points also, but he has a bye in the final round so he will finish with 4.5/7. There will be a battle for 2nd-3rd next week as Bambou, Kristian Clemens and Kayven Riese are close behind at 3.5/6.

In the under 2000 section, Kevin Sun maintains a half point lead in first place over Samuel Brownlow and Adam Stafford. Sun was put under a lot of pressure against Stafford, but he was able to foce a perpetual check to kep his section lead.

In the under 1600 section, Isaac Sterling has locked up 1st place with yet another victory, this time against Claudio Bastiani-Fonck. He is a perfect 6/6 and is 1.5 points ahead of Sebby Suarez and Iven Yarovoy, both players he has already defeated.

19.Rxc6? The very aggressive move loses at least one piece. I almost didn't give it a question mark as it leads to a fascinating position. 19. Be5 fxe4 20. Qxe4 would have only been slightly worse for White. 19...fxe4 20.Bxb5 exf3

We held our 1st Championship Quads event since our return to over the board play and it was met with great success, with 42 players in total, and the top 3 quads featuring players 1800+, with the top quad all players 2000+. We even had Mechanics' Institute Trustee GM Patrick Wolff stop by and check in on the action. For full results, please click on this link: 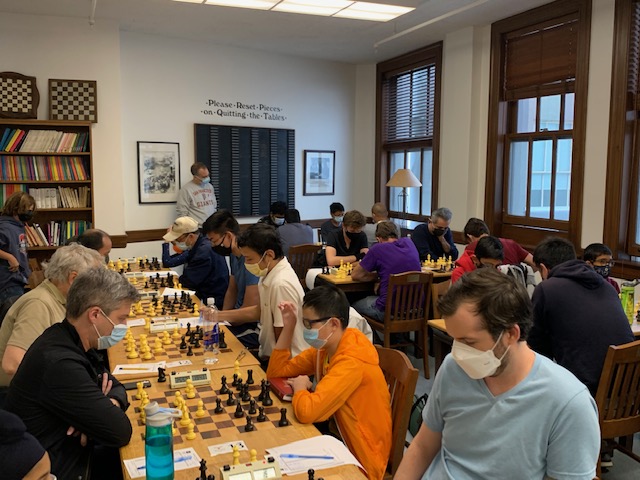 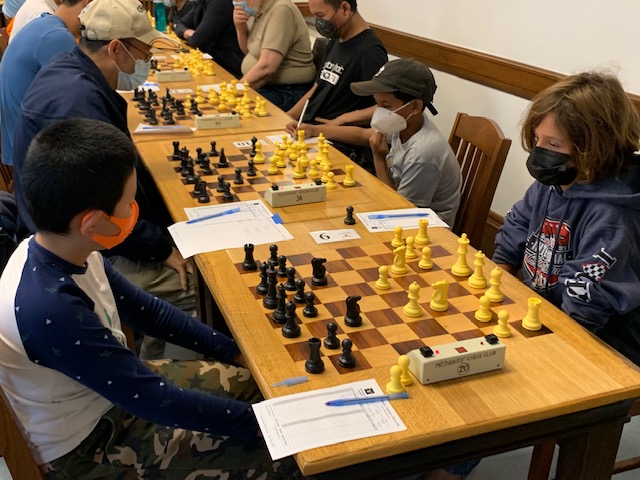 The Thursday Night Marathon concluded with the top 3 players holding on to their lead and finishing far ahead of the rest of the field. GM Gadir Guseinov, IM Bala Chandra Dhulipalla, and NM Mike Walder finished 1st-3rd, with Guseinov winning with 7.5/8. Congratulations to him on yet another ThNM win.

The night was not without its drama, as Napa's Jeff Anderson had Guseinov beaten in his game, but fell into time pressure late. This caused him to blunder with less than a minute left, leading to to him getting mated in a beautiful mating net with knight and bishop. It was a tough loss, as he had Guseinov at nearly +3 before the mistake. Here is the game here: https://www.chess.com/game/live/23161851967?username=zenwabi

Dhulipalla also saw a tough fight in his game against Sanjeev Anand in the final round, but the IM's skill eventually prevailed. Congratulations to all the participants!

It was a fun broadcast as well, as we discussed chess, movies, music, and much more. I dare say it is worth viewing even if you are not a chess fan. We experienced technical difficulties at the beginning, but finished the broadcast very strong in my humble opinion. Here is the link for your enjoyment: https://www.youtube.com/watch?v=Dzw_I8HGGb0 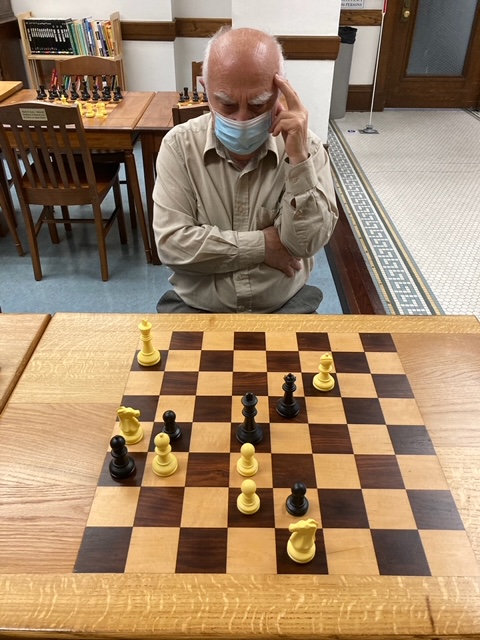 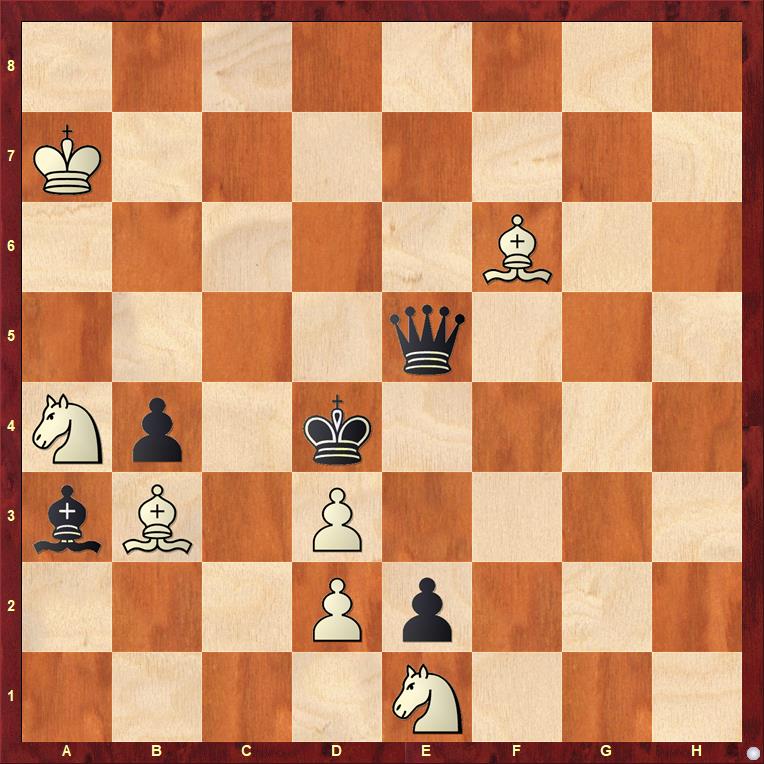