Round 2 of the TNM saw the underdogs continue strong play, with Ilia Gimelfarb securing a draw against IM Elliott Winslow in a game he was likely winning. Sean Kelly also looked like he was in a winning position against Nathan Fong, but the UC Berkeley grad fought back to hold the position and also draw. Alex Chin fought hard all the way to the end of the night against FM Ezra Chambers, but Chambers got the win to stay on top with 2/2 in the section along with Nicholas Weng. Guy Argo had an exciting win against Kevin Sun giving him 1.5/2. 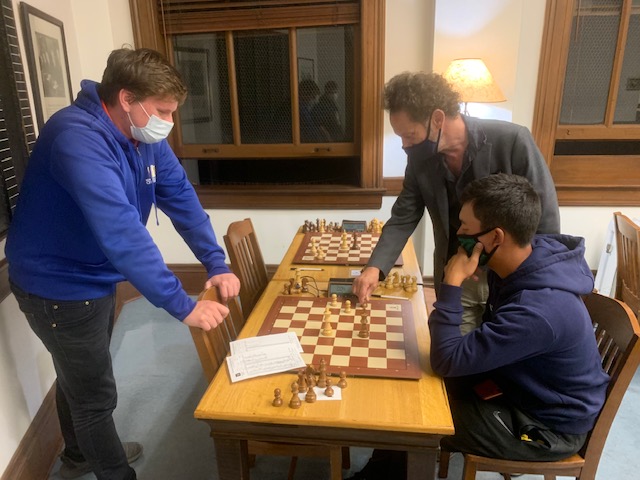 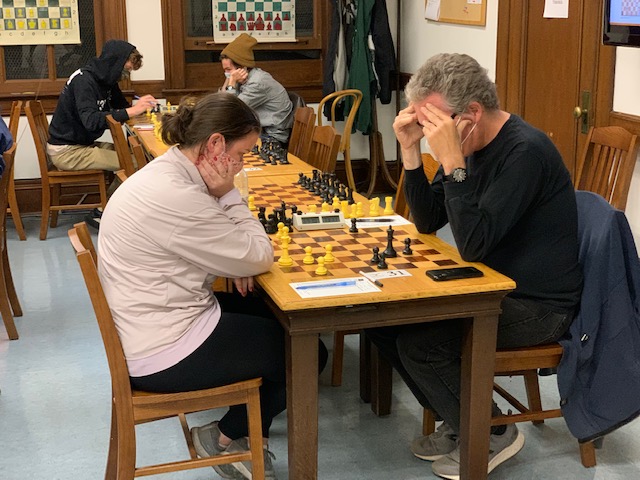 FM Paul Whitehead chimes in at the conclusion of the Chambers-Chin game. TD Judit Sztaray getting in on some chess action with an extra rated game against William Thibault.

A strong group of nine players are tied in the under 1800 section with 2/2, which includes Marty Cortinas, Georgios Tsolias, Sebby Suarez and Christopher Dessert, who had a fine win against Teodoro Porlares.

Judit has been on a roll lately. This game was bound to be a good battle. 1.e4 c5 2.Nf3 d6 3.Bb5+ A good way to avoid the myriad variations of the Open Sicilian. You have to be Mike Walder to play those well. 3...Nc6 4.0-0 Bd7 5.Qe2 e5 I like this move by Black which firmly stakes out the center and prepares to develop the dark-squared bishop. The d5 square is slightly weak, but there are now no worries about White pushing the e-pawn to cause trouble. 6.c3 a6 7.Bxc6! Playing for development as Morphy would do. White could also retreat the bishop and play a kind of Ruy Lopez position. 7...Bxc6 8.d4

Watch the broadcast by following this link: https://www.youtube.com/watch?v=5DYzFI9H1hY

Here are the current standings headed into round 3 next week:

The final two rounds of the Thursday Night Marathon online finished with the defending champion coming out on top once again. GM Gadir Guseinov won both games, defeating a game FM Ezra Chambers in round 5 and winning round 6 against Sheel Dandekar to take 1st place with 5.5/6. Guseinov was playing with fire a bit in the final round, as he allowed Dandekar to achieve an even position in the endgame. But Dandekar, rated 2034, had only seconds on his clock, and got mated in the time scramble.

The game of the tournament was played by FM Max Gedajlovic, who defeated IM Bala Chandra Dhulipalla in round 5 to help him take clear 2nd with 5/6. The game is annoated below by GM Nick de Firmian.

Special shououts go to Bryan Hood and Casimir Dudek, who both had strong tournaments, and to Katherine Sunny Lu, who is a rising player whom we will be looking forward to following her progress.

Here are the tentative final standings, pending cpmpletion of the fair play review. Watch the live broadcast of the round here: https://www.youtube.com/watch?v=nvXHxNbsipw

Tony challenges you to solve this problem, white to move and mate in 4. 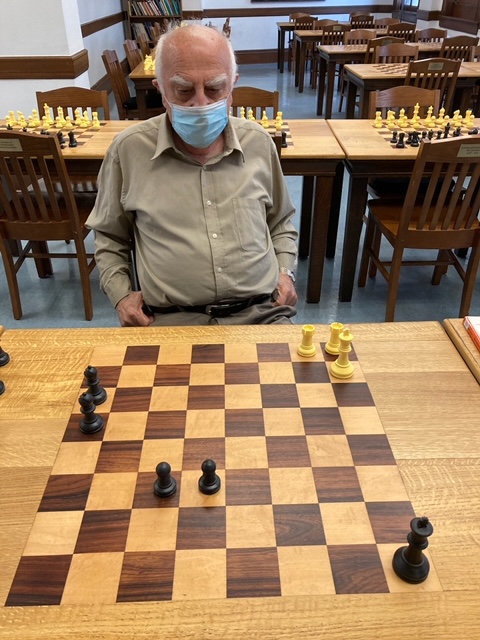 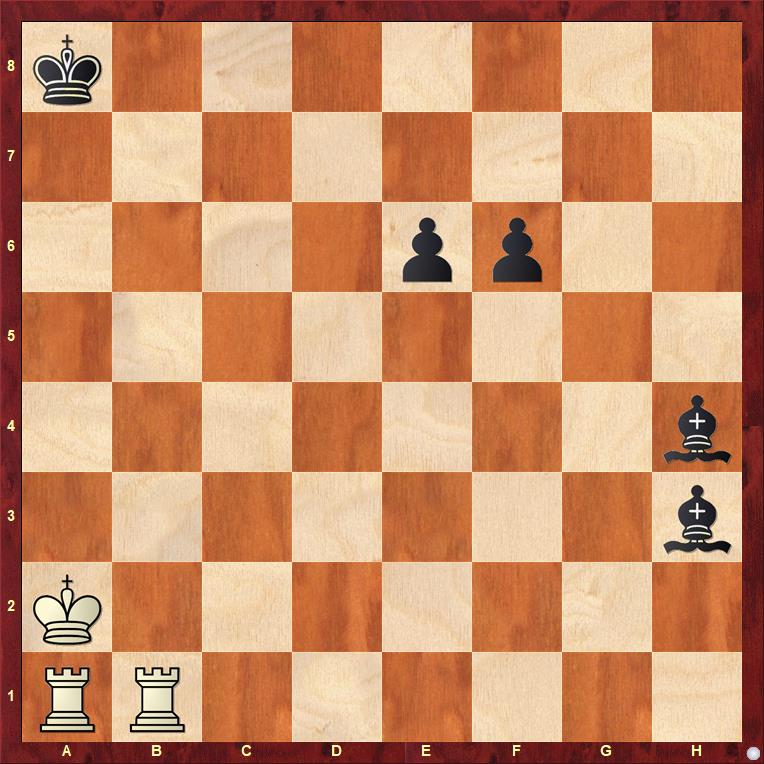 For those starting out, and for those who think they know everything.

In the following diagrams you will be given two tasks.

First you need to define the issue(s) and figure out what is required in the position: it might be how to force the win of material, queen a pawn, or even to deliver checkmate.  It may simply be a continuation that maintains the equilibrium or forces a draw.  There may be more than one road to follow – chess is a complicated game!

Secondly, you are given three or four choices – call them “candidate moves” or possibilities - on a sliding scale of excellent to disastrous.  You may even come up with a perfectly fine - or horrible – move of your own!  Chess gives us a dizzying array of choices, and separating the wheat from the chaff is our responsibility.

Were you able to fulfill the requirements of the position?

The answers are given below. 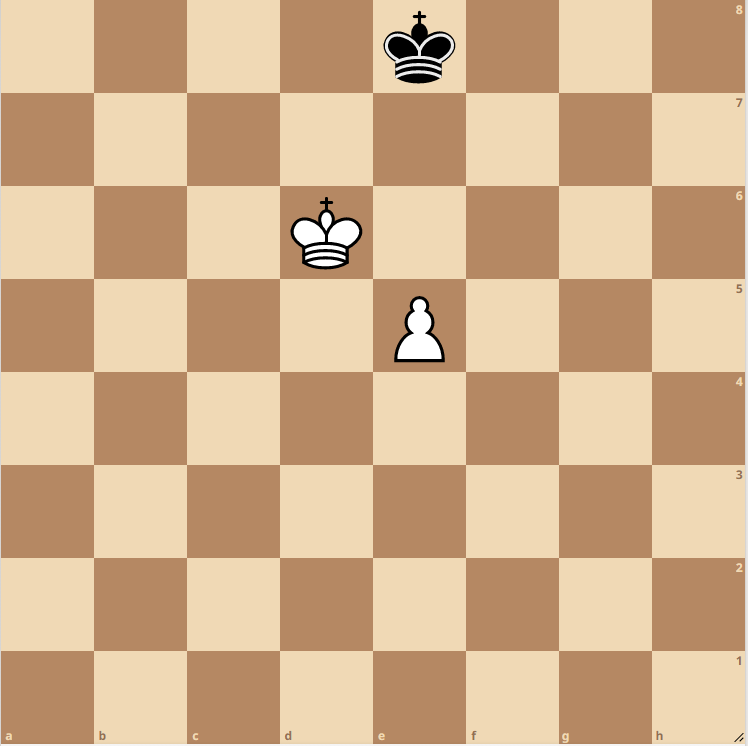 1. It is good practice to keep drilling these positions into your head, no matter how easy they seem. 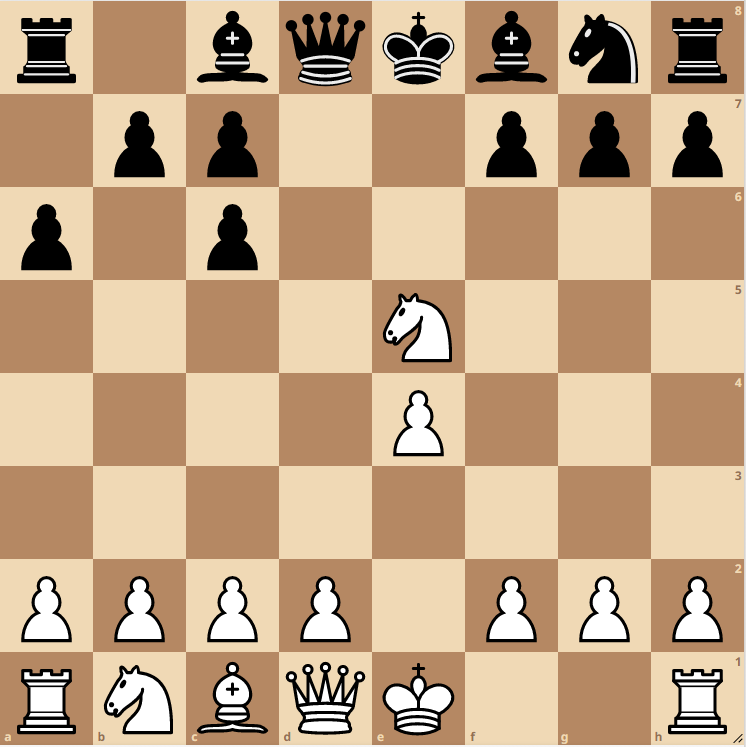 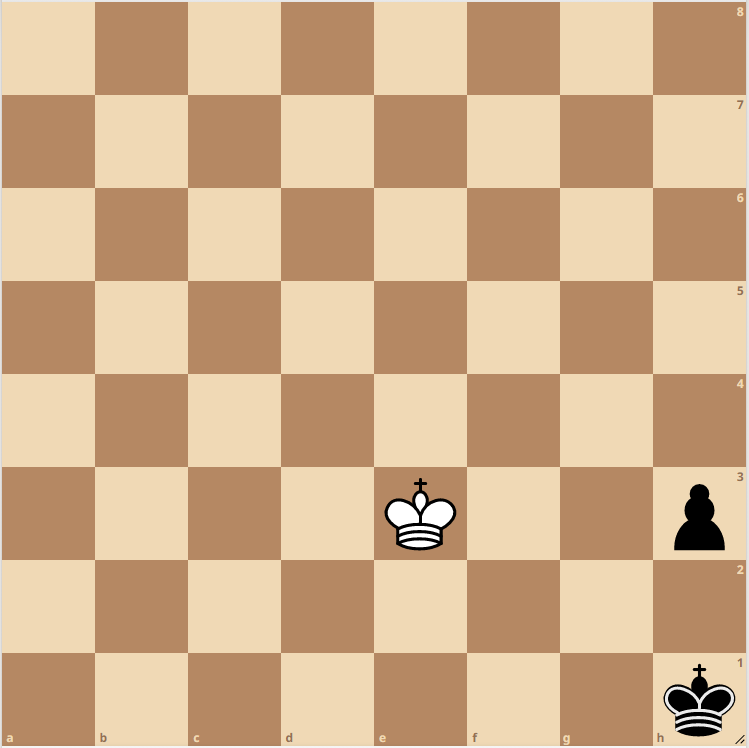 3. King and pawn endings are tricky, but knowing these basic positions can bring home the bacon – or save your hide. 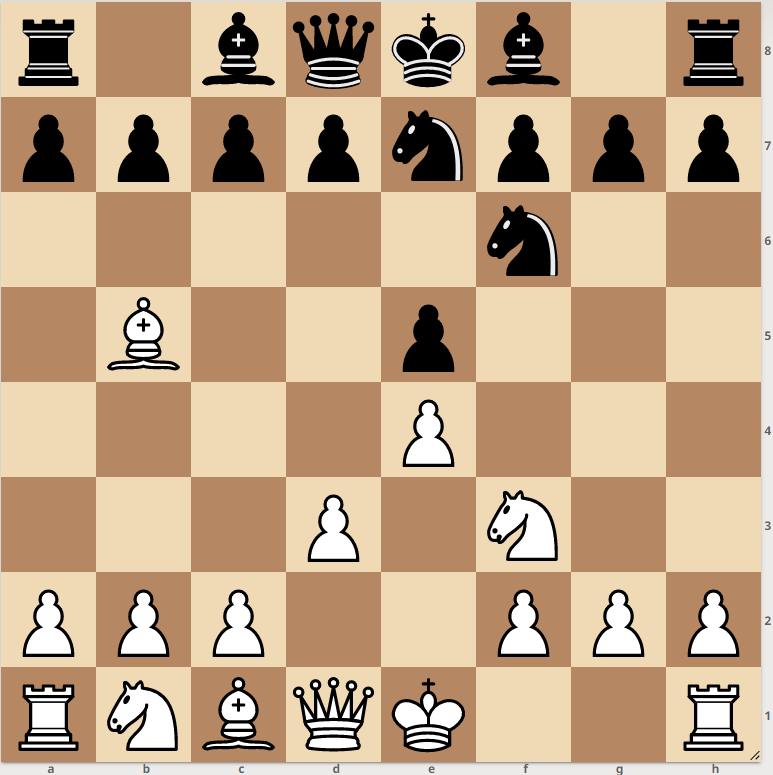 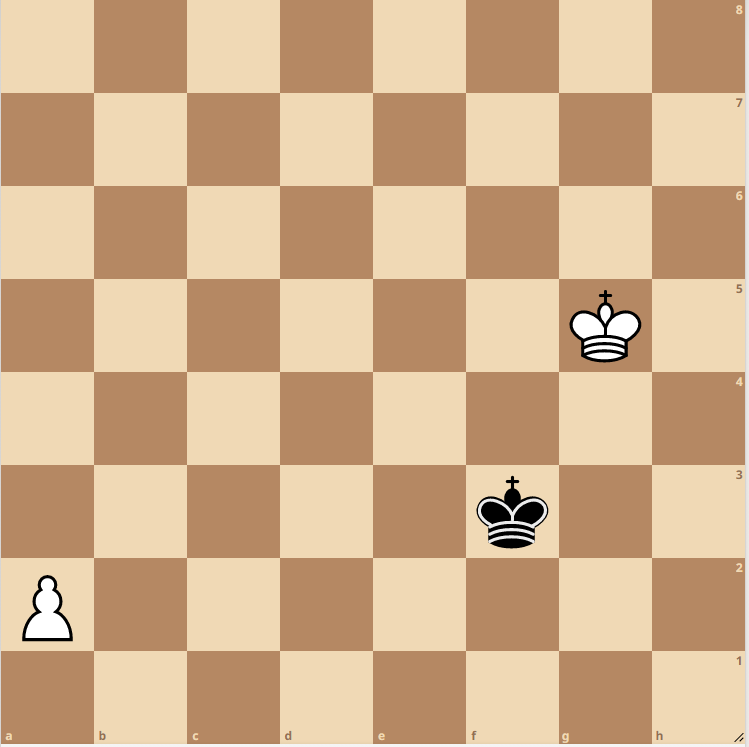 5. Another king and pawn ending, and another idea well worth knowing. 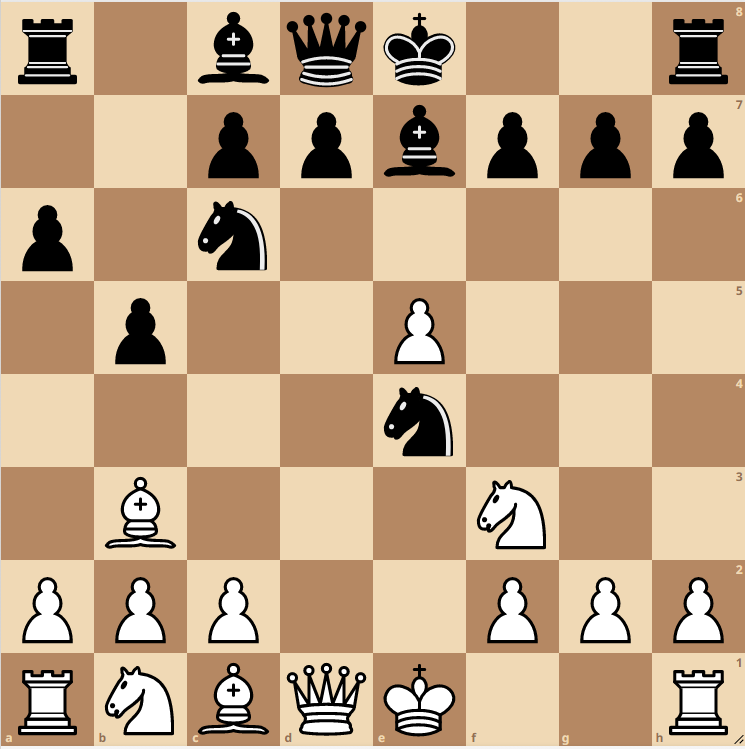 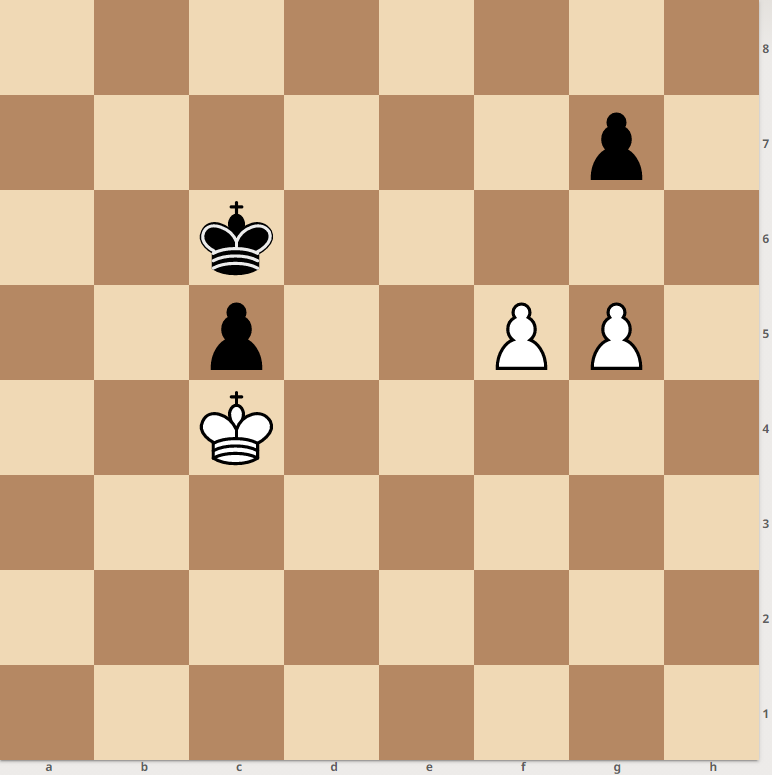 7. Another important concept in king and pawn endings is illustrated here, in Carlsen – Naiditsch, Russia 2007. 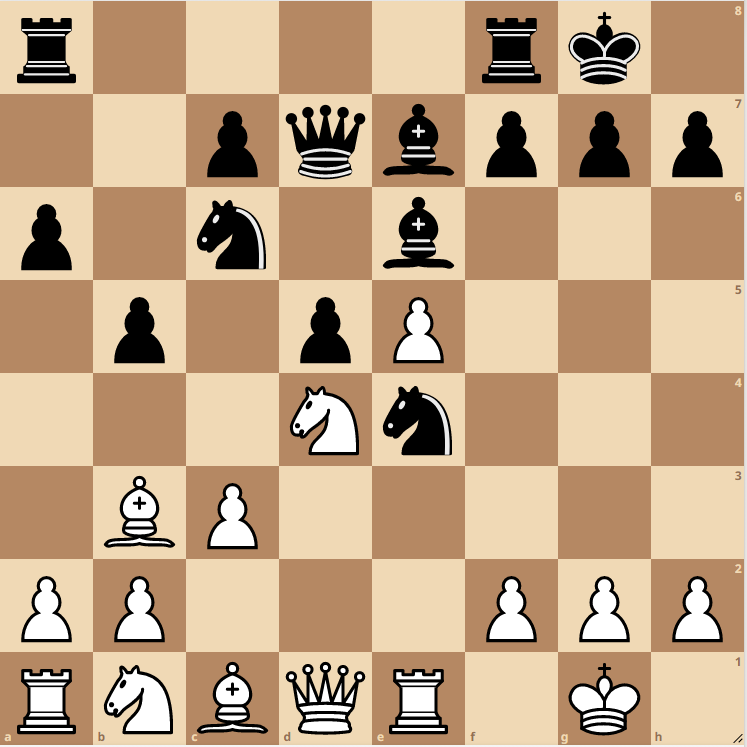 Nick's column will return next week.

Your task is to take advantage of the loose knight at e4 and black’s uncastled king to win material, and A) 8.Bxf7+ is a good move that does both. After 1…Kxf7 2.Qd5+ Ke8 3.Qxe4 white has won a pawn and black can’t castle. This is excellent, but as the saying goes: “If you see a good move, look again. There may be a better one”, and that’s the case here. After C) 8.Qd5! black will lose an entire piece. Mate at f7 is threatened, and the knight at e4 is hanging. Black is dead lost. B) 8.0-0? Is just too lukewarm. Black also castles, and the moment has been lost.