Chess Clubs From Around the World: Chess in Mexico City

I recently came back from Mexico City visiting family, but of course my eyes and ears are always out for the chess culture everywhere I go. World class chess is no stranger to this city, as the 2007 world chess championship was held there. It was a championship in which tournament format, not a match, decided the champion. GM Vishy Anand won the tournament and became world champion, unifying the classical and FIDE world titles and setting the stage for what we have today, in which there is one world champion defending the title through match play against the winner of the candidates tournament.

Chess itself is a universal language, with the power to bring people together regardless of cultural background. A chess player can go anywhere in the world and play a game, even in places where one does not speak the native language, communicating solely through the movement of the pieces and the beauty of the position on the board. A common bond can be formed, a bond that is not restricted by anything outside of the board in front of the participants. But chess is also special in that it is an art form and activity that is easily accessible to everyone, regardless of economic status. In a city with an estimated population of around 22 million, chess offers the opportunity to unify everyone.

Panoramic view of the Zocalo in Mexico City

In the heart of the capital of Mexico City, is the Zocalo, the main public square which was also the public square for the people of the Aztec capital of Tenochtitlan prior to the conquest by Hernan Cortes in 1521. About a block away from this space is Templo Mayor, which was the main temple of the Aztec capital, whose ruins sit there to this day. Around the Zocalo is the Metropolitan Cathedral, a church which began its construction in 1573 and completed in 1813. It is a beautiful area of Mexico City in which the echoes of the past are brought front in center as you are surrounded by the architecture while listening to the sounds of the present. This is why it was special to see right there in the Zocalo three chess tables, ready for anyone to to sit down. In the short time I was there I couldn't find any takers for a game, but I'm happy I got to lay the Mechanics' Institute board down at this historic site. 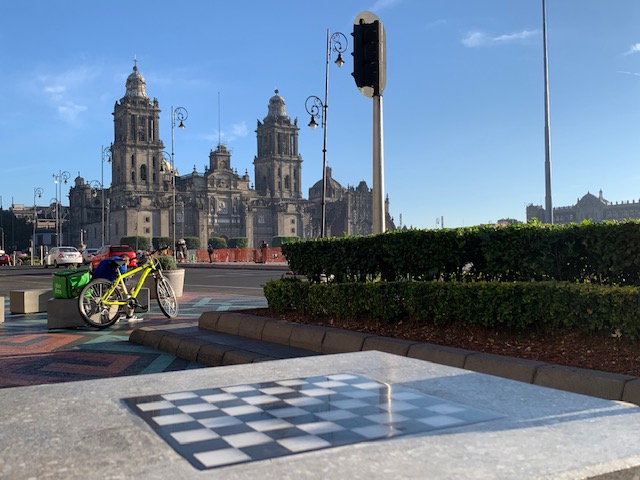 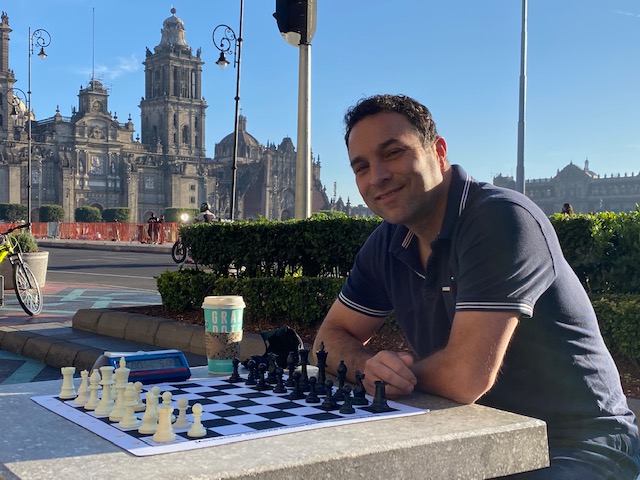 I was later able though to visit a special place for chess in the city, a chess club that has its own space and is open seven days a week for chess. It is called Club Cuauhtemoc, and they hold weekday casual games and events on the weekend. It definitely had the feel of a social space, as they even sell refreshemnts and snacks for those that come by the club. They seem to take a preferred interest in organizing rapid and blitz events, and judging from some of their crosstables, have a pretty strong group of players participating, with some players rated 2000+. 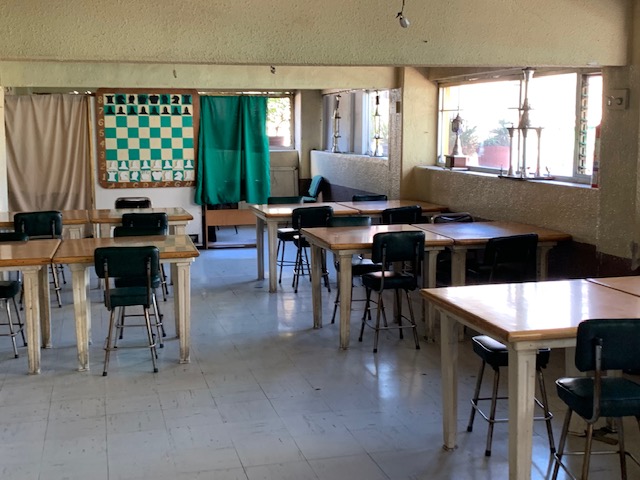 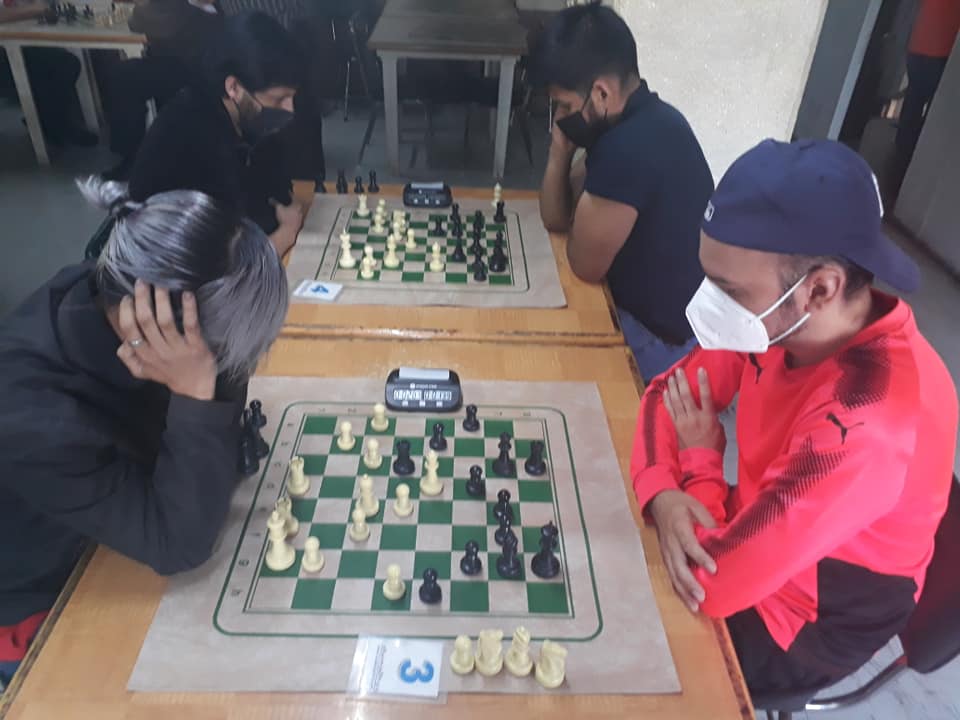 Chess play in parks is very popular in Mexico City, and there are plent of large parks within the city, with beautiful sculptures and fountains that make it an incredible place to unwind for friendly games. 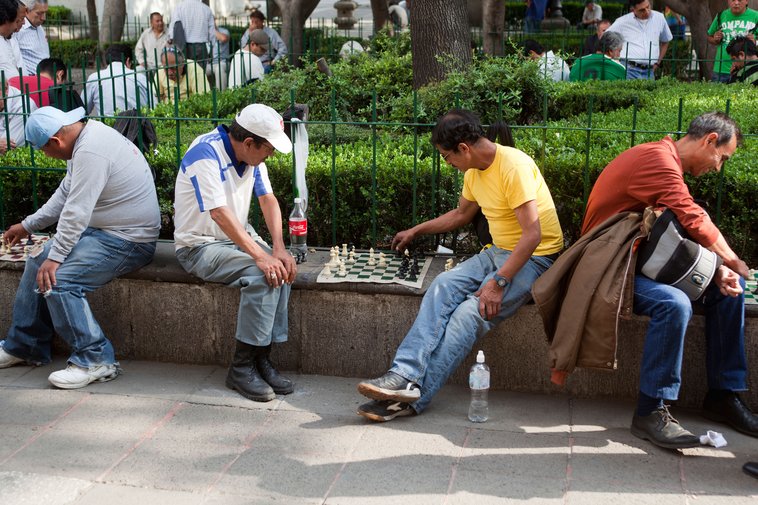 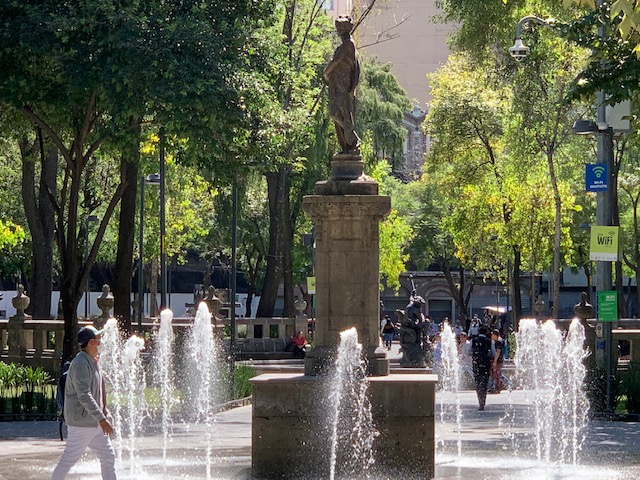 It was great to experience the feel of the people, and take in the history. Being around the people and seeing the daily hustle and struggle to make a living and go about the day makes me reflect on the values that are of importance. Translating it in terms of chess clubs, it is one thing to have a building open, it is quite another to have a soul inside it. An open building means nothing if the passion and connection of the people inside isn't there, so understanding the people and their values and connecting with them means everything. In Mexico City, whether you play at a park or club, or for the world championship, I do believe chess players share a common bond and connection, and it is up to leaders to know what that is and undersdtand it and cultivate it.

At an enrichment site this week I was with a student waiting to be picked up, and she was holding a book she had checked out at the library. It was a tennis book and there was a quote from Boris Becker that read,"I love the winning, I can take the losing, but most of all I love to play."

Maybe the connection starts with that, loving what you do.

Tony challenges you to solve this teaser, white to move and mate in 3! Del Rio 1750. 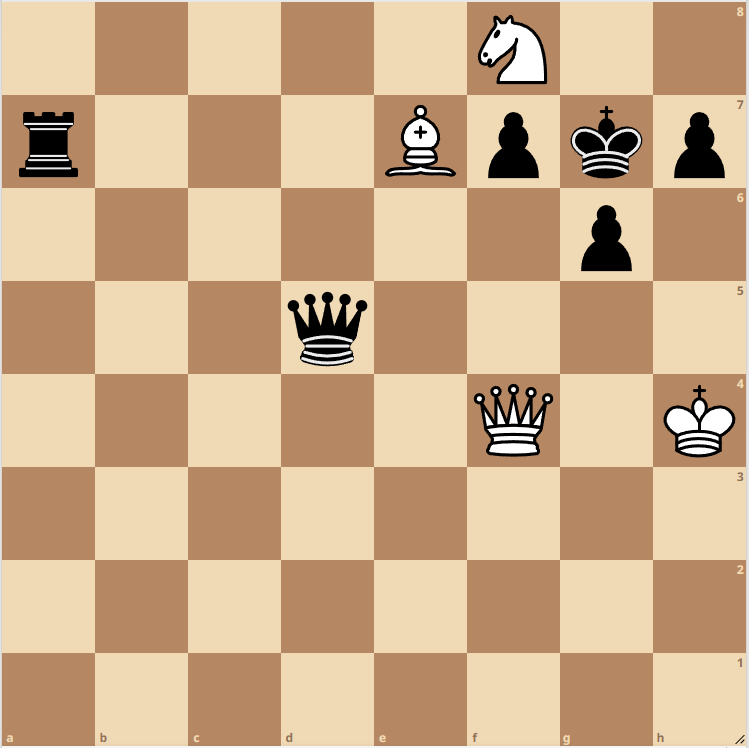 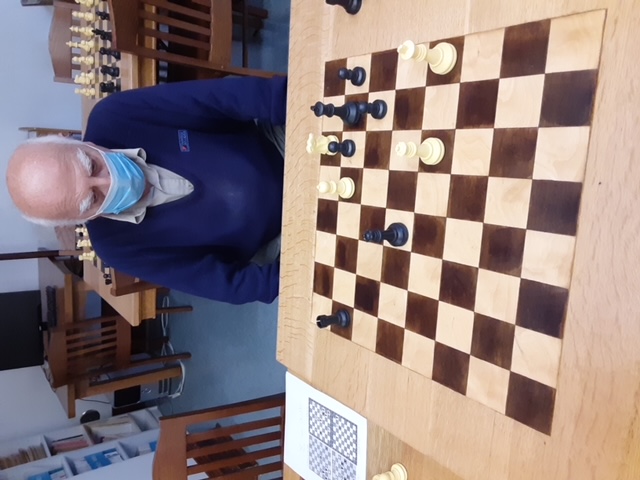 IM Sal Matera and the Art of Defense

I teach a few classes for the Mechanics’ Institute using Zoom, and just finished going over Damsky and Polugaevsky’s classic treatise, The Art of Defence (1988) with a handful of students varying widely in age and strength.

Much to my surprise IM Sal Matera signed on, a trustee and vice-president of the fabled Marshall Chess Club and frequent visitor on another MI Zoom offering, the Monday Chess Café.  Sal was the U.S. Junior Champion in 1967, and became an International Master in 1976.  He was one of John Collins ‘Seven Chess Prodigies’ along with Fischer, the Byrne brothers, Lombardy, Weinstein and Cohen.

The Marshall has a reciprocal relationship with the MI: their members and ours can take advantage of discounted classes and tournaments that are offered by both clubs.

I still can’t believe I’ve never been to the Marshall.

And I’ve never met Sal in person – or have I? We both played at the fabled Lone Pine tournament in 1979, and perhaps we spoke or sat adjacent to each other – it would have been on the lower boards, as neither of us did very well that year!

Yet I feel like I’ve known Sal for a long time.  We have mutual friends and acquaintances, and old chess tales in common, stories that link the East and West Coasts.

Having Sal in my class was simply wonderful: he provided expert analysis, deep wisdom and warm humor.  And, at times, he adroitly corrected and clarified sloppy thinking by the teacher, who had a tendency to rush through the material without hitting the pause button…

On to some chess, and in particular the 18th and penultimate chapter of The Art of Defence, titled 180 Degree Turn.  In this section Damsky and Polugaevsky introduce a high-level concept that ‘may be comparable in strength with the detonation of a bomb.’ 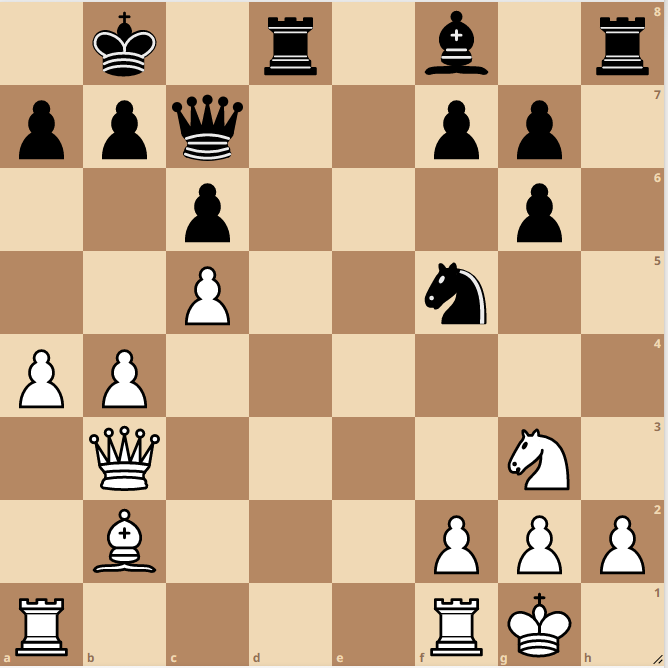 This is a classic example of the ‘detonating bomb’ idea: active defense by moving a pawn (or pawns) that stand directly in front of one’s own king – in fact, right where you are being attacked!

Soon after the class ended Sal sent me a note and clipping from an article he penned for Chess Life in April 2020. Titled My Best Move, it featured a nice pic of Sal and his wife plus an annotated victory over a young Hungarian Grandmaster in the 1974 World Student Olympiad: 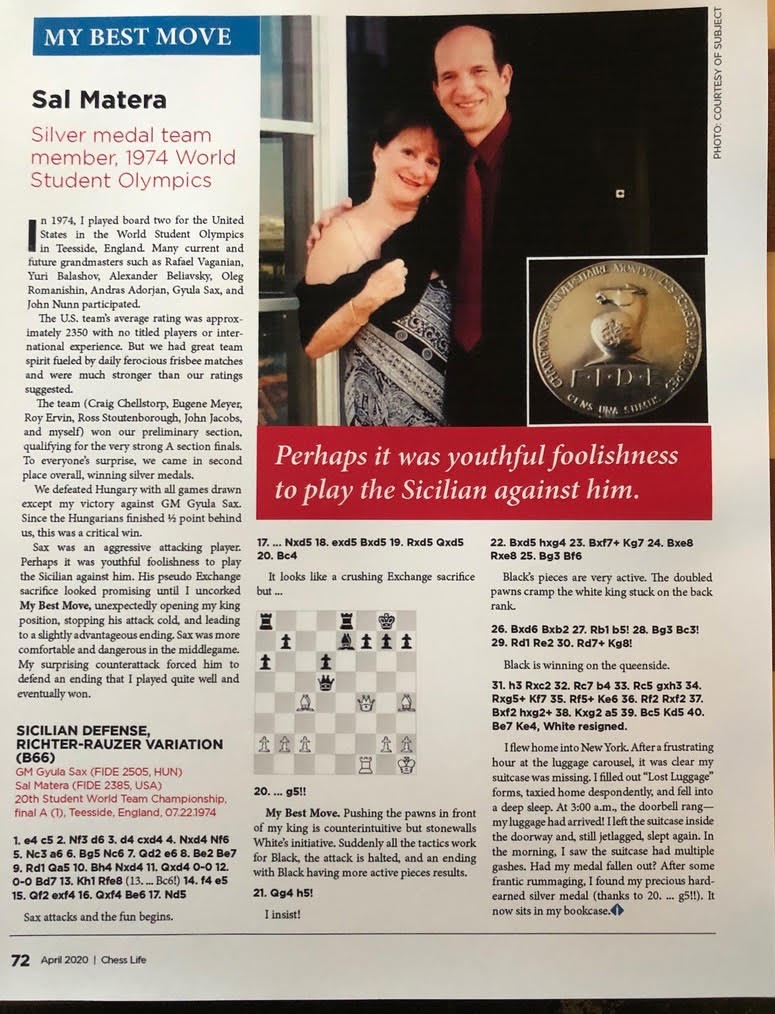 At the final Art of Defense class, you were talking about surprising moves in front of one’s King. I flashed back to my game against Gyula Sax where I floored him in an open Sicilian with g5! Followed by h5! The article I wrote in 1974 about the game is attached as is the below article In April 2020 about g5! Being My Best Move. Hope to see you later in the Café!’

What a perfect illustration this game is of the ‘detonating bomb’ defence – in fact, it struck me as the best example yet, and a worthy inclusion into both a future edition of The Art of Defence, not to mention my next class! 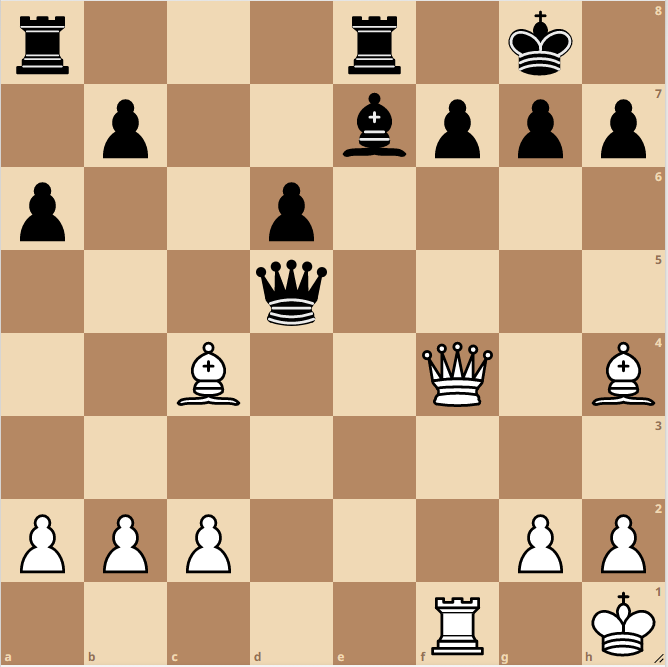 This made me think of asking Sal to sit in on ALL of my classes.  I’ll be the old trickster, and try to convince him that if he’s the one that does the work, then I’ll be the one who get tired…

But seriously: this was/is one of our most talented players, and his mind is as sharp as a tack.  I am privileged to have gotten to know him a little.

Join us for the Chess Café, Monday's at 4pm: https://www.milibrary.org/chess/chess-cafe

If you’re lucky, Sal Matera will be there too.

GM Nick de Firmian returns with his column next week