Chess Clubs From Around the Country: Bernal Heights San Francisco

The Mechanics' Institute women's chess class has been going on for several years. Originally taught by Lina Krubnik, it has since been taken over by FIDE Developmental Instructor Sophie Adams. Sophie gets a loyal following every Sunday, and her dynamic and passionate approach to teaching keeps the class engaging and fun. The class, until March 2020, met live at MI on Sunday mornings. We were fortunate that during the pandemic we were able to transition the class online, and we received support from the US Chess Women's Program to fund the class through 2020-2021 year. We are very excited to announce that we received a donation to fund the class for yet another year from Alexandra and Roddy Lindsay, with the aim of supporting more diversity in the chess community through an increased participation of women and girls in chess.

The impact of such support, to give an example, can be seen by the efforts of Juliana Gallin. She has participated in the women's class, and has since participated in some of our other offerings like the Monday Chess Cafe https://www.milibrary.org/chess/chess-cafe. More importantly, she has organized a chess group that meets every Saturday afternoons at 3pm in Bernal Heights in San Francisco. Here is a brief description of the club from Juliana along with pictures. 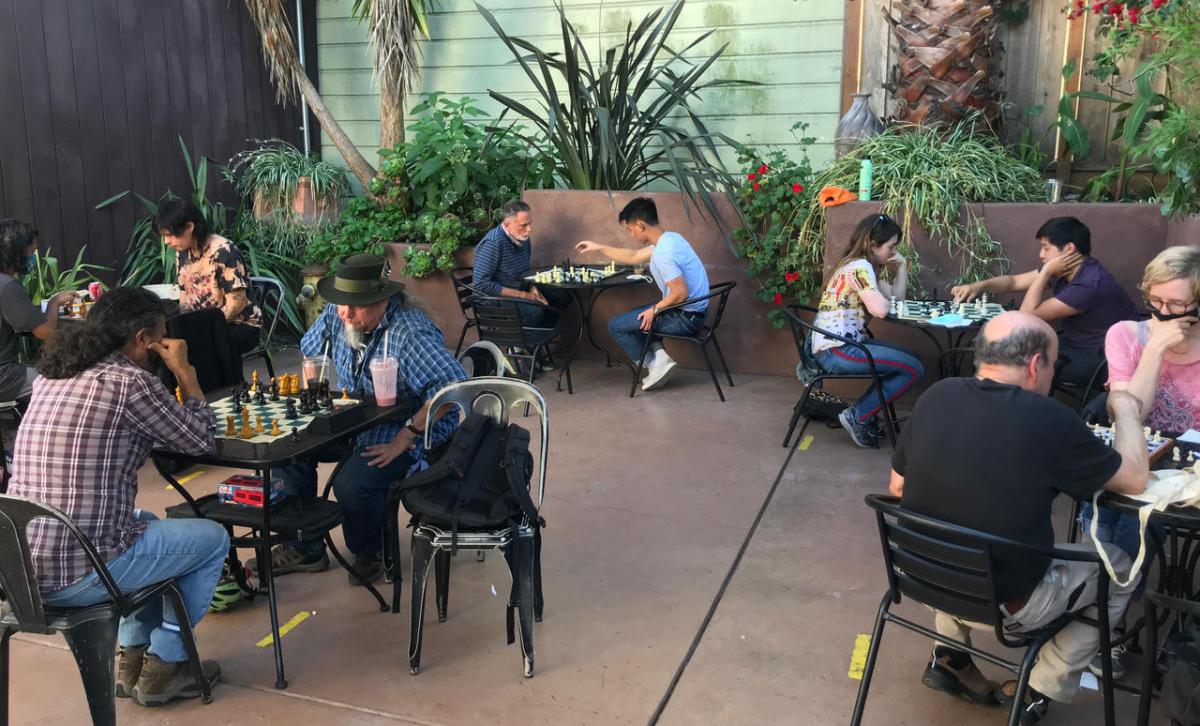 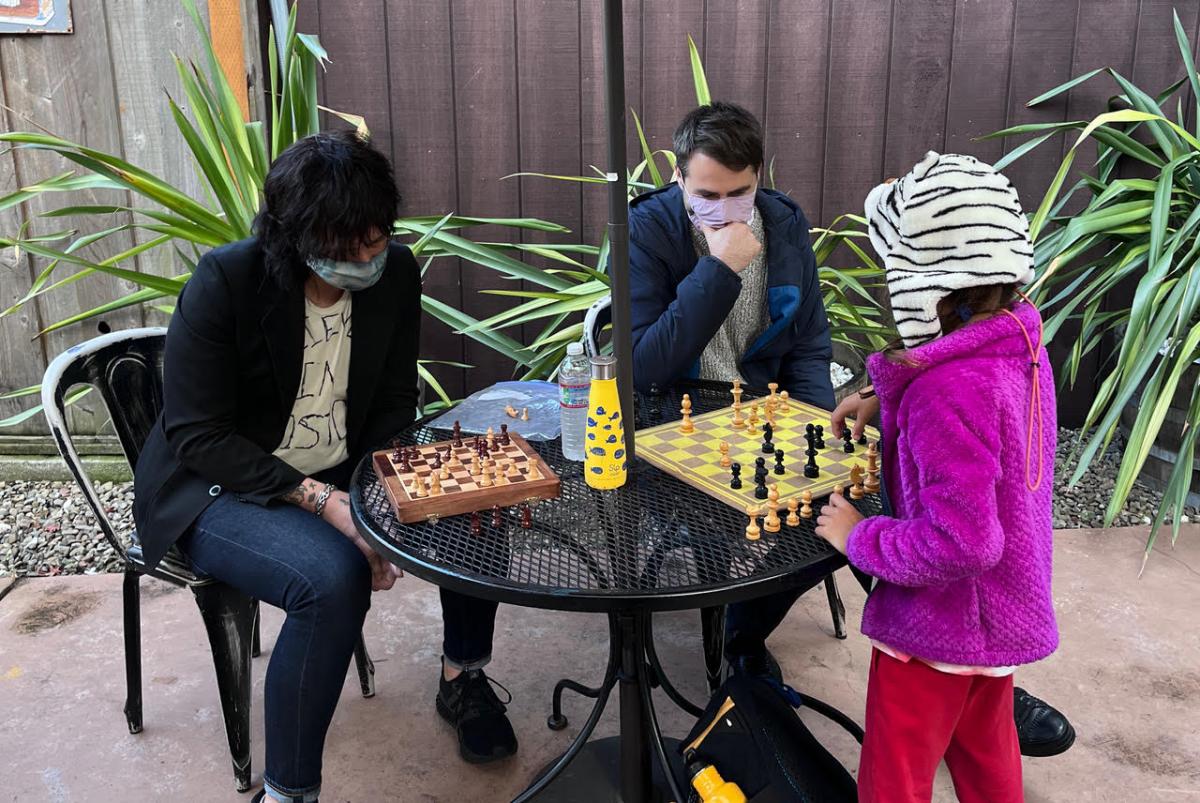 The Bernal Chess Club meets on Saturdays from 3-6 in the outdoor back patio at Progressive Grounds in Bernal Heights, SF. All levels and ages are welcome. People are encouraged to buy something to eat, drink, or take home for later. We want to make sure Progressive Grounds feels our appreciation and looks forward to having us back. BYO chess set.
In addition, when the Bernal library eventually reopens for public events, we’ll have use of their community room on the 4th Wednesday evening of every month. We’ll use that time for a special presentation, followed by games for anyone who wants to play. 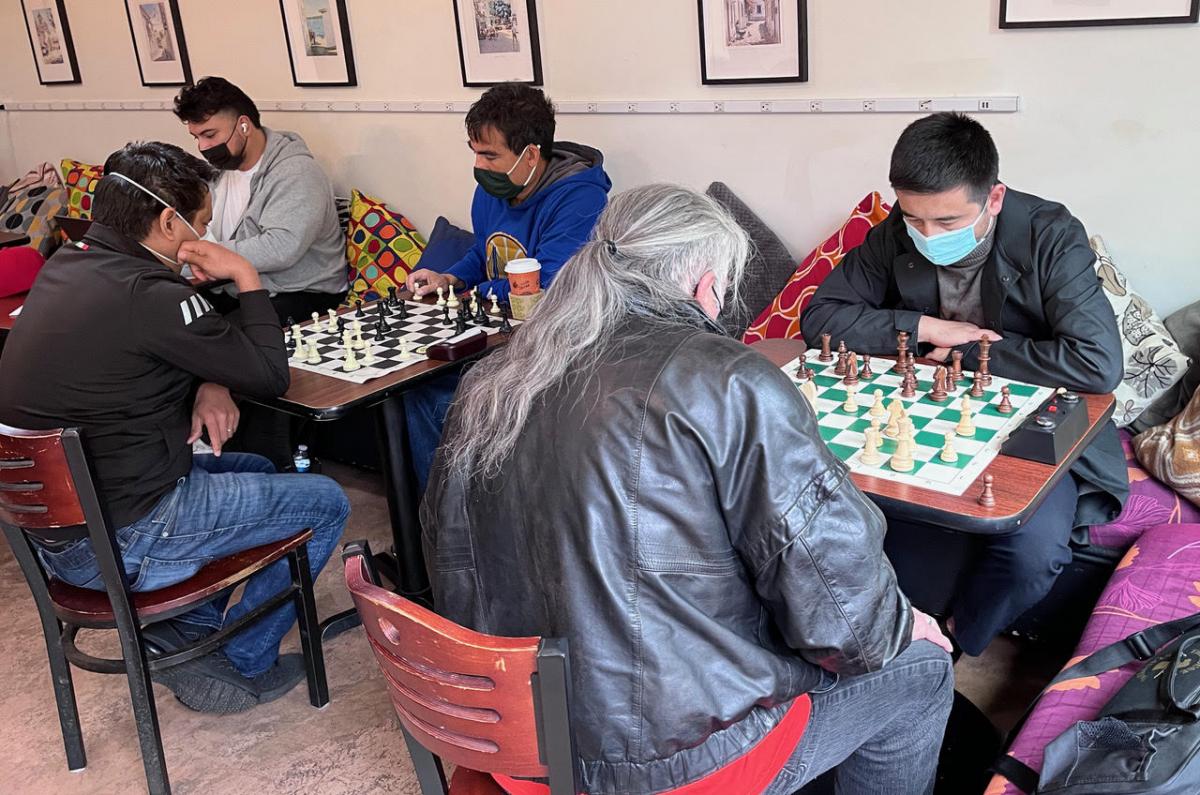 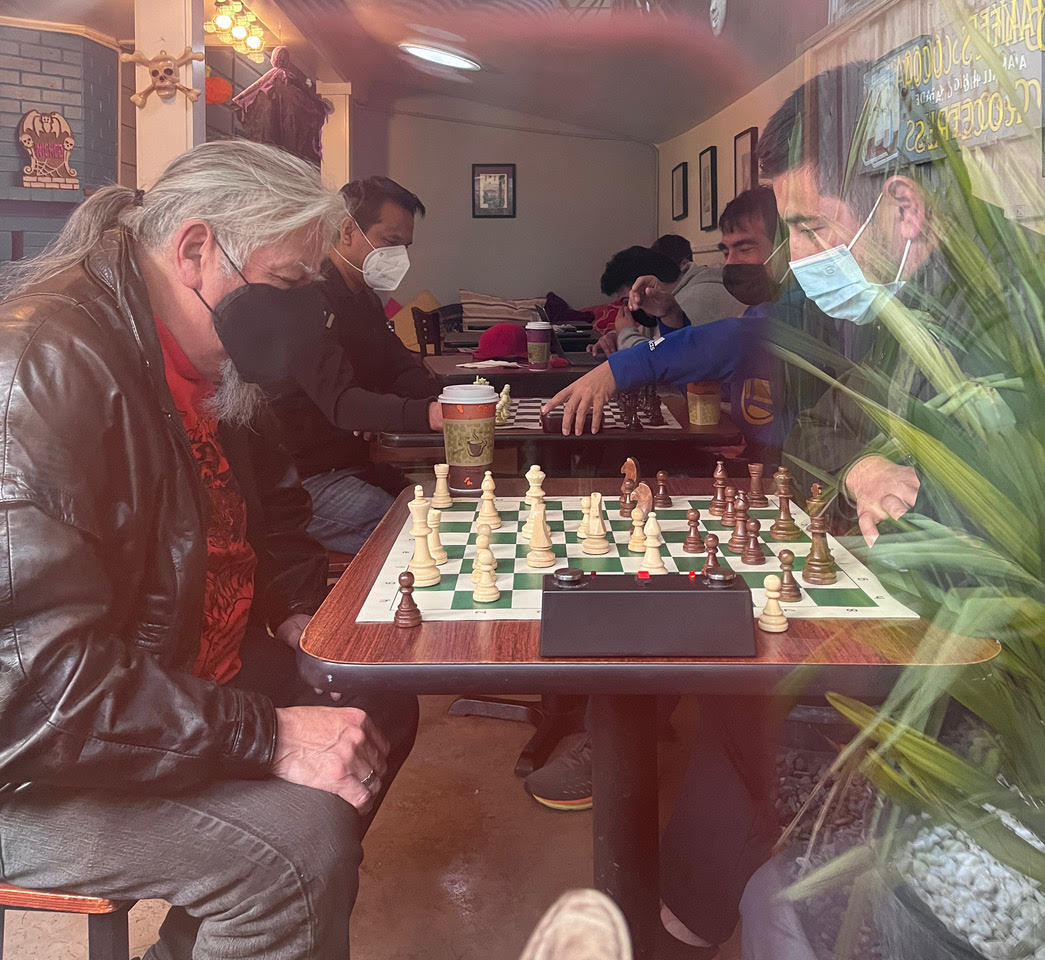 Chess clubs come in many varieties, and a coffee house chess club is a very common form of meeting. The participants get a venue in which to play while the business benefits through the patronage of the customers and the raised awareness of the location, with referrals for future business. It is a win-win situation not just for chess players and business owners, but for the community at large as well.
It is exciting to see a gathering like this take flight to help bring a community together through chess, in this case, every Saturday. You never know what support of one program can yield in spurring growth in other areas. Thanks to Juliana and the Bernal Heights Chess Club for spreading the joy and love of chess.

The last Tuesday Night Marathon of 2021 began last Tuesday with the largest first round attendance since we reopened in June. Over 70 players have begun this event, with 8-rounds of FIDE rated action to close out the year. There were some surprising results in the top section, but still plenty of time for players to bounce back. On board 2 Lucas Lesniewski grinded out a knight and pawn endgame against 2nd seed Christophe Bambou to come away with a big win. Adam Stafford used a blistering attack to defeat Nicholas Weng. Under 1800 TNM winner Daniel Wang showed he's ready for the top section with an upset win against Steven Sveboda. David Askin returned to the Mechanics' TNM with a win, as did top seed IM Elliott Winslow. 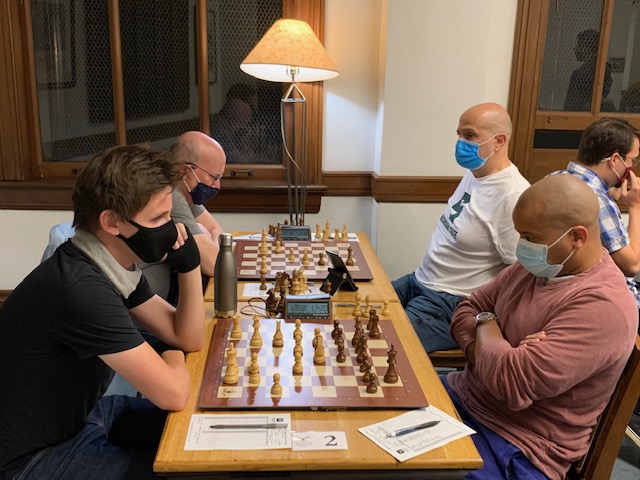 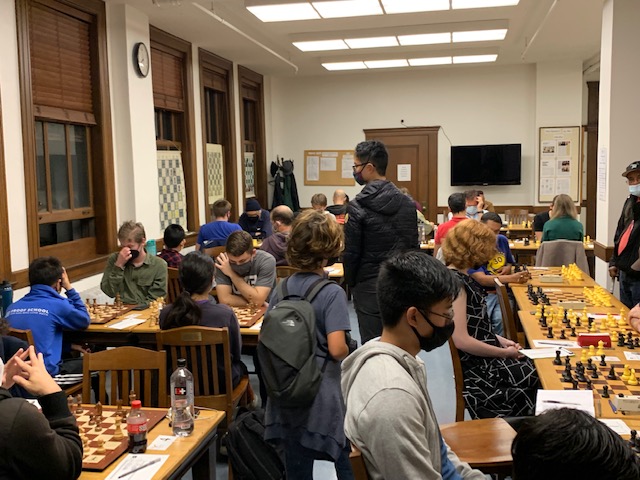 In the under 1800 section, there will certainly be a struggle to pull away, as there is solid parity in strength across most of the section, but certainly the favorite has to be Adam Mercado, he got a 1st round win against Cloe Chai. Mercado is coming of the heels of winning the Mechanics' Online Triathlon, as looks in solid form. 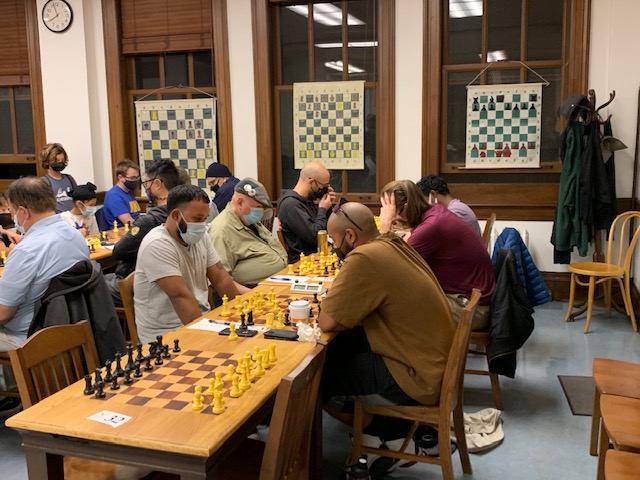 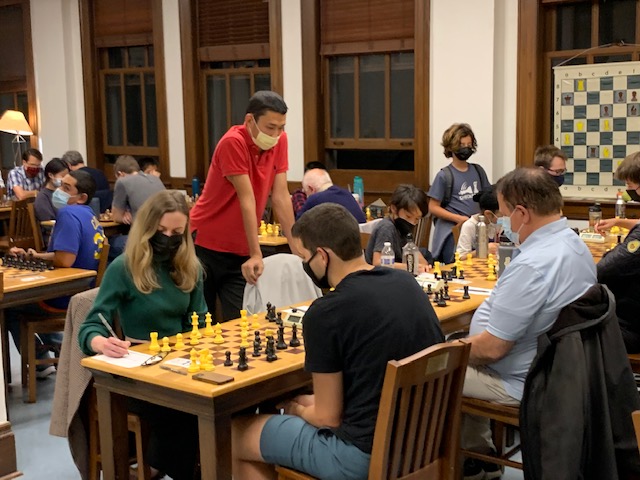 Former Mechanics' Chess Director IM John Donaldson gave a lecture before the start of round 1. It was a great treat for the participants and a nice way to kick off the tourney. We will have a special guest next week for the lecture, as GM Evgeny Schtembuliak will be in town visiting and had agreed to give the lecture and join the broadcast for a bit.

Here are some games from the 1st round, annotated by GM Nick de Firmian. 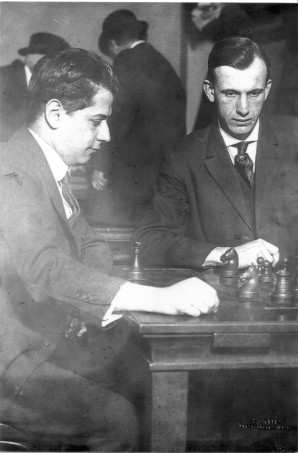 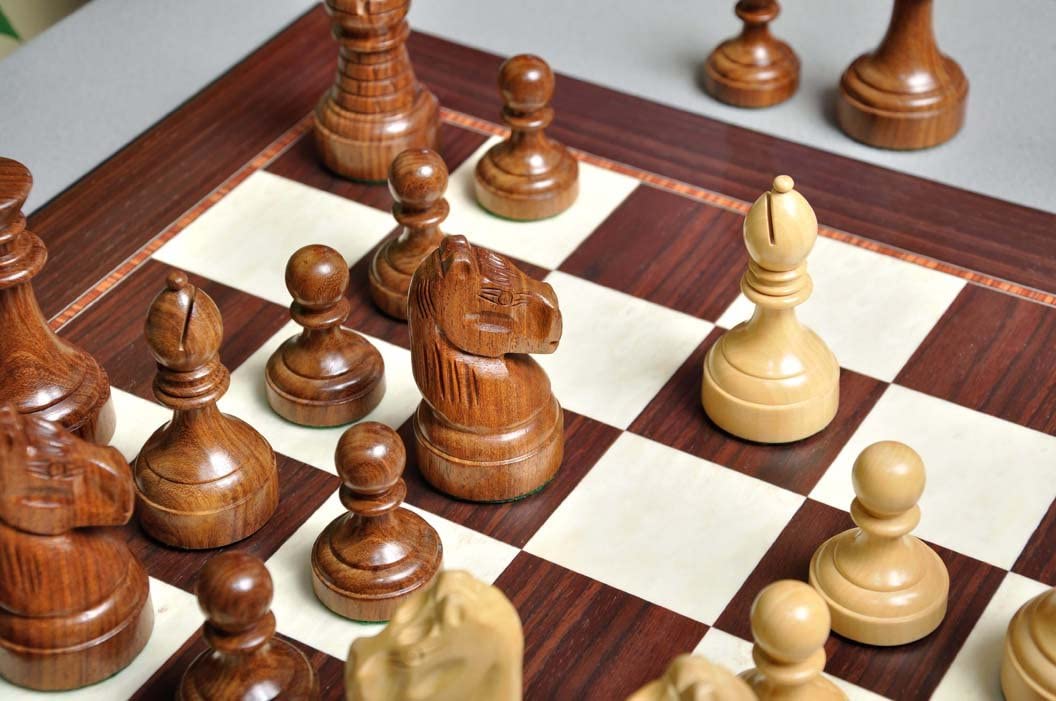 To purchase your own set or to get one as a special gift, please follow this link HERE

Thank you for all your support!

Tony is switching it up this week, asking readers to find the variation that saves the game. White to move and draw! 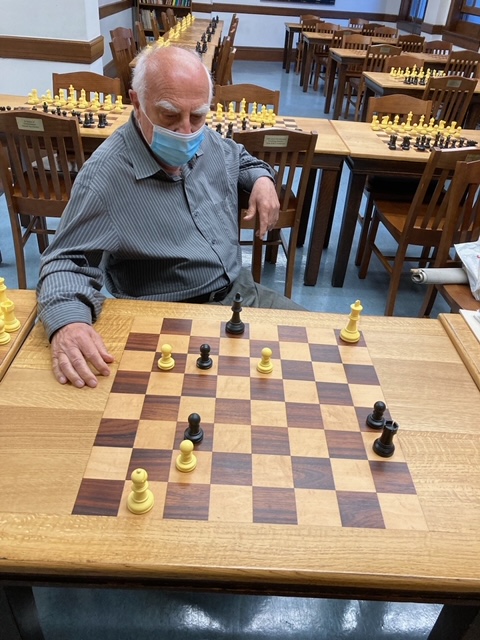 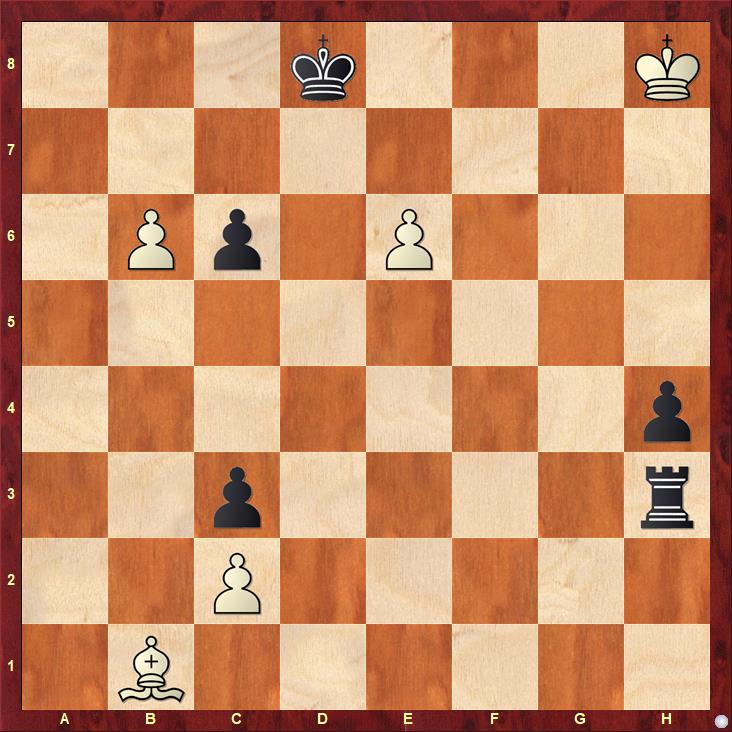 Alireza Firouzja and the ghost of Mikhail Tal

The FIDE Grand Prix is underway in Riga and the phenomenal 18 year old Alireza Firouzja leads with 6.5 – 1.5 with three rounds to go.  He seems assured of a spot in the next Candidates Tournament in 2022.  There’s a large group tied a full point behind, a group that includes Americans Fabiano Caruana and Samuel Sevian.  The second place finisher also gets a spot in the Candidates, so there’s a lot at stake.

This tournament was originally the fabled Isle of Man tournament – cancelled because of Britain’s strict Covid quarantine.  Ironic then that Latvia also went into a strict lockdown, yet decided to hold the event anyway.  Some top Grandmasters bowed out due to concerns about Covid, including Hikaru Nakamura and Alexander Grischuk.

With Firouzja on a tear in Mikhail Tal’s hometown of Riga, it’s only fitting that the fearless play of this rising star resembles, in no small manner, the artful power of the 1960 World Champion.

The transplanted Frenchman (Firouzja is originally from Iran) made an early statement in round one: 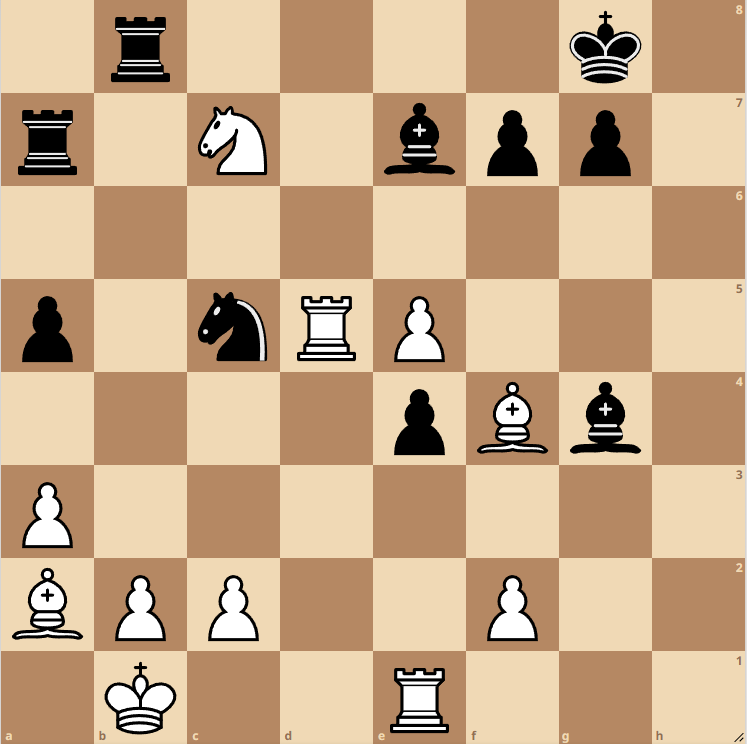 In round two the American Darius Swiercz was overwhelmed in a freewheeling tactical slugfest that came down to this: 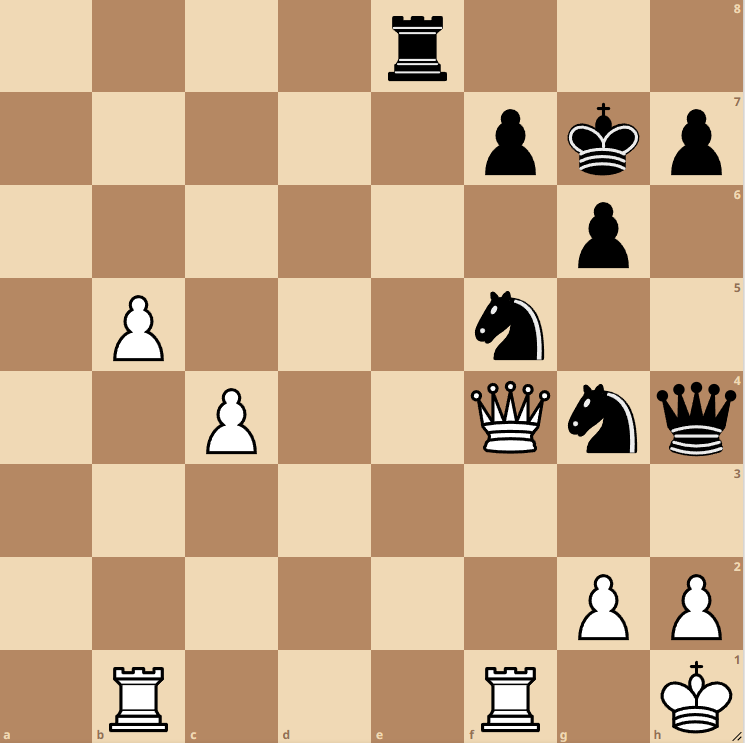 In round three he ground out a nice endgame: 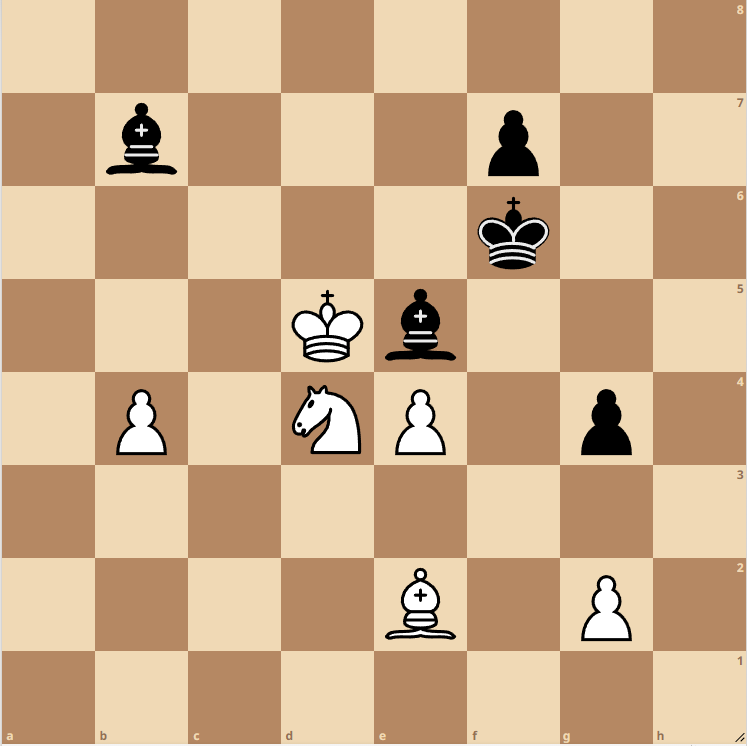 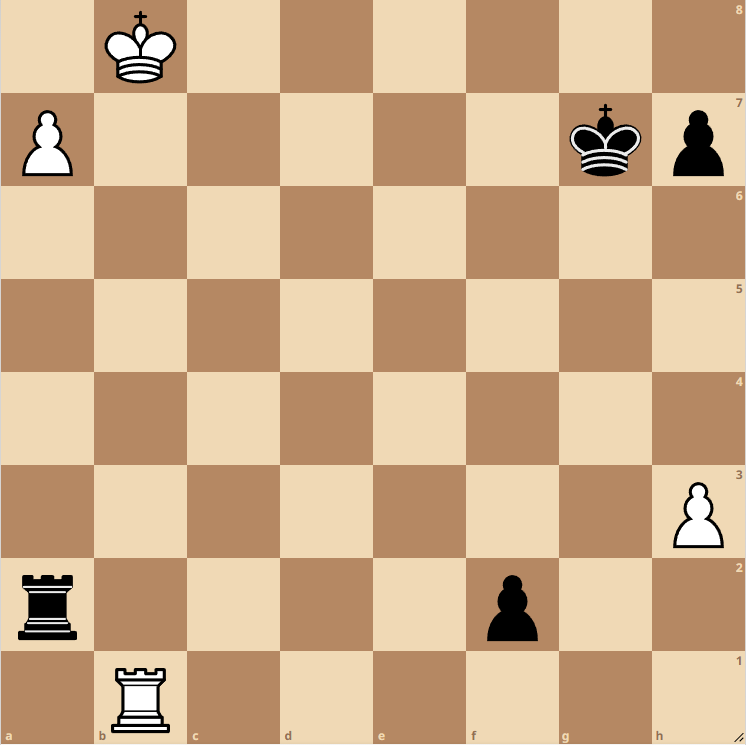 And today superior opening preparation seems to have made the difference in White’s crushing victory over co-leader Sasikaran: 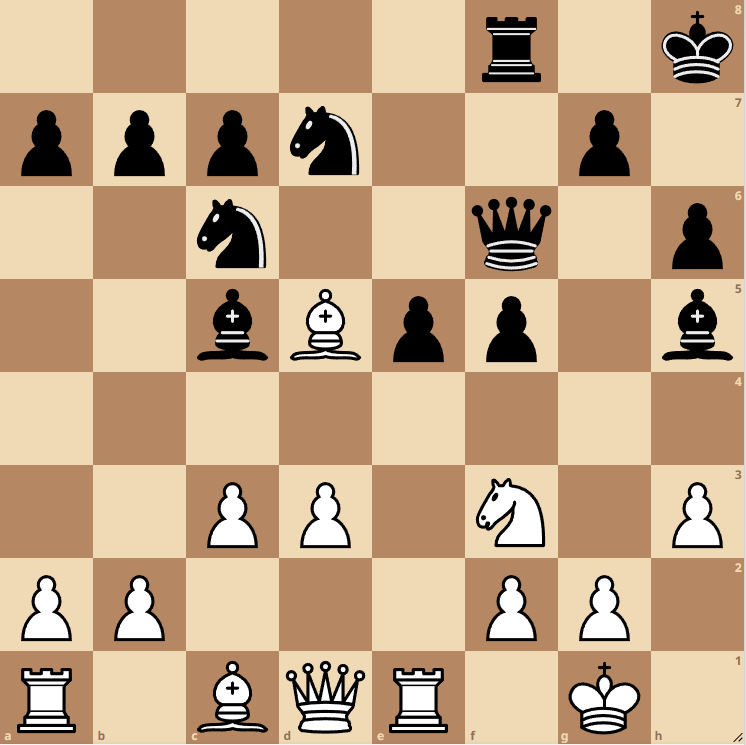 White has won the exchange, and soon sacrifices his queen for a decisive material advantage.

When we say this word in the chess world most players immediately think of the highly respected, fighting opening that has produced many brilliant games in the last 70 years (for both the White side and the Black side). Bobby Fischer was the quintessential Najdorf player – one who plays highly aggressive, daring chess that walks the edge of defeat in pursuit of the absolutely best continuation. Many love the opening for the extremes it compels one to undertake. Garry Kasparov was another Najdorf devotee, as were many others of the very best – Gelfand, Anand, Maxim Vachier-Lagrave and occasionally Magnus Carlsen. In our own Mechanics’ world we see wonderful Najdorf games from Mike Walder and Elliott Winslow.

We take this opportunity to write about the man whom the opening is named after – Miguel Najdorf , who was born Mojsze Najdorf before he immigrated from his native Poland to Argentina during World War II. He was playing in the 8th Chess Olympiad in Buenos Aires when World War II began. Najdorf was Jewish and most of his family was killed by the Nazis in Poland during the war. Najdorf became an Argentine citizen in 1944 and would win the Argentine championship 8 times as well as making a great mark internationally. He died in 1997 at age 87, having often said “I hope to die at a chess tournament.”

My own experience with Najdorf was extremely pleasant. He sponsored a tournament in Buenos Aires in 1995 that I played in (he sponsored many chess events since he had made millions in the insurance industry). At 85 years old he would battle the best young international masters of Argentina in blitz, to which I would be a very entertained spectator. Many evenings we would go out to dinner. I remember one time a very distinguished man came to our table, bowed, clicked his heels and presented to “Don Miguel” a fine bottle of Argentine wine. It was then I realized how highly respected he was in the Buenos Aires community. When the man left Najdorf said, “This is too much wine, should we send it back?”  I felt useful when I told him, no Miguel, I don’t want to insult your friend so I will do my best to make use of it. Below we give two of “Don Miguel’s” best games.