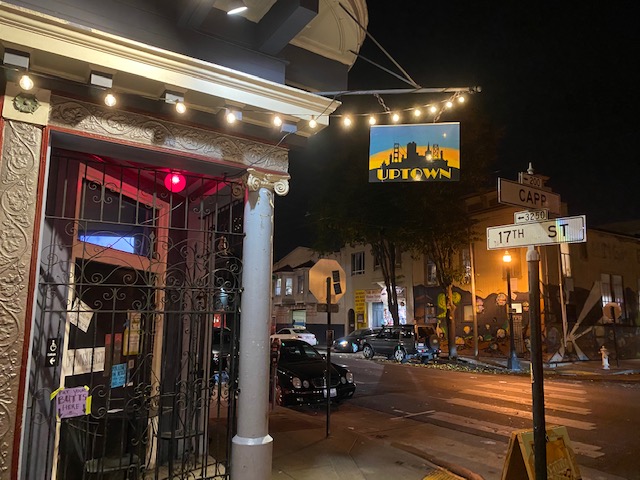 I had the pleasure of attending the first meeting of the Uptown Chess Club on the corner of Capp and 17th street in the Mission. It is a self proclaimed dive bar, but the owner, Shae Green, embraces the term lovingly. As I walked in at about 6:30pm on Wednesday, I saw every booth filled with players playing chess, having drinks, and socializing. I ordered a drink, something very much needed after a full day coaching scholastic programs, and I walked around watching some games and meeting new people. I was surprised to learn nearly everyone was not a tournament player or USCF member - they were people who play chess casually on Chess.com or Lichess, but not really interested in competitively-rated play. While the chess was casual and fun, it was no less competetive as players agonized over missed opportunities and wins and losses. However, at least in the relaxed atmosphere and ambiance, you could smile, have a drink, and play another game. Thanks, Shae, for starting this, it looked and felt like a great success! The club meets the first Wednesday of the month, but I have no doubt chess would be welcome at Uptown anytime! 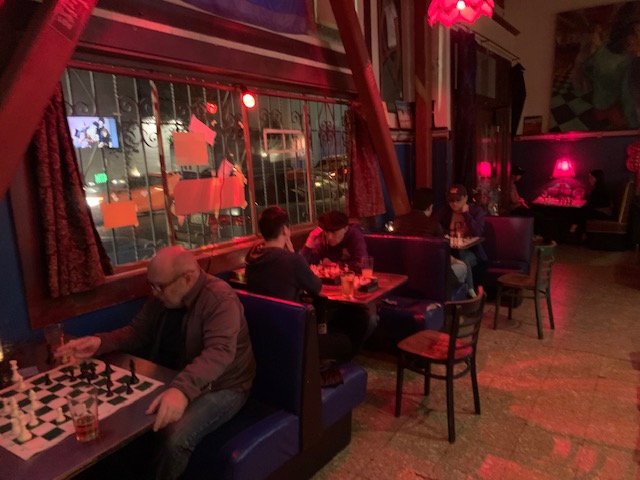 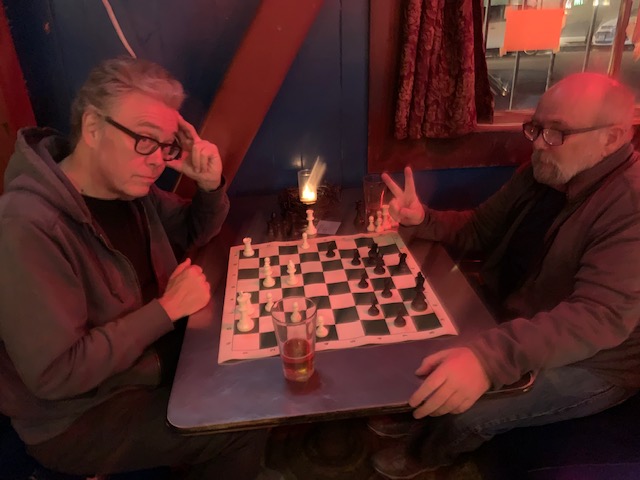 IM Elliott Winslow survived an opening gone wrong against Adam Stafford, outplaying him after he missed his chance to capitalize and extend his lead in the TNM after 5 rounds with a score of 4.5/5. Christophe Bambou and Daniel Wang drew their game in what was the final game of the evening to put both players at 3.5, along with Nathan Fong, Guy Argo, and Lucas Lesniewski. 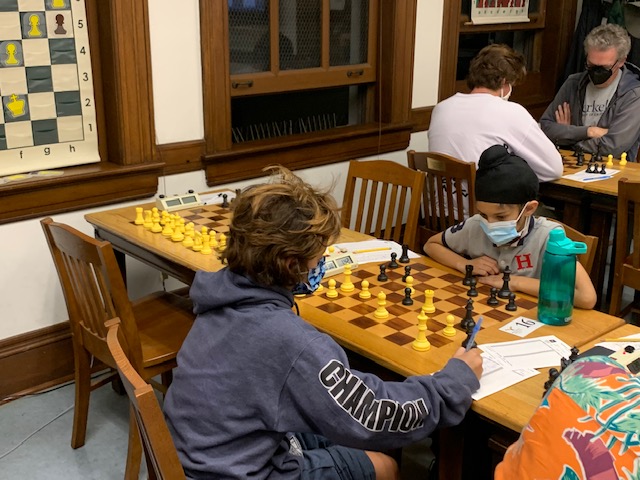 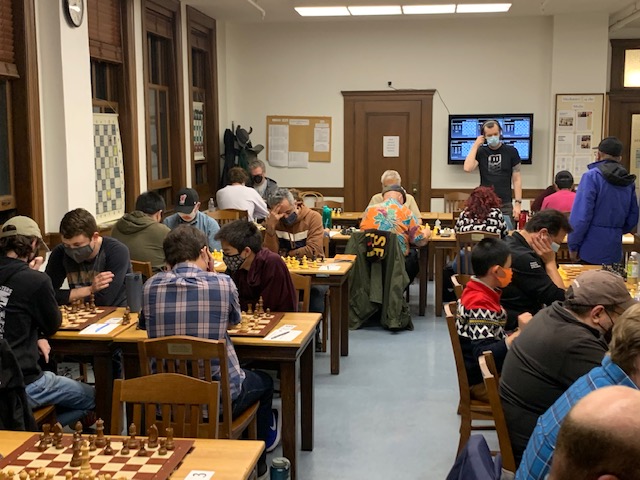 In the under 1800 section, Adam Mercado is back on top of the leaderboard after a win against Stephen Parsons. He is the sole leader with 4.5/5. Two rising young players Yuvraj Sawhney and Sebby Suarez played in what promised to be a tough match, and the win went to Yuvraj, putting him in a tie for snd place with 4/5 along with Dean Guo, Adam Ginzburg, and Albert Starr.

Round 6 of 8 will be next Tuesday. It has been great having our live broadcasts with player commentary for post game analysis. Click here to watch the broadcast:

Here are some games form the round, annotated by GM Nick de Firmian.

The inaugural Mechanics' Gobbler Open brought 40 players together for a three-day Thanksgiving chess celebration for our community. The FIDE-rated event was in three sections, and we would like to thank all the participants who played. I want to also thank IM John Donaldson for signing copies of his book, three of which we gave away over the weekend as raffle prizes. Congratulations to section winners IM Elliott Winslow and NM Austin Mei who tied for 1st in the top section, Alexander Su in the 1600-1999 section, and Muradhan Sabyrov in the under 1600 section. 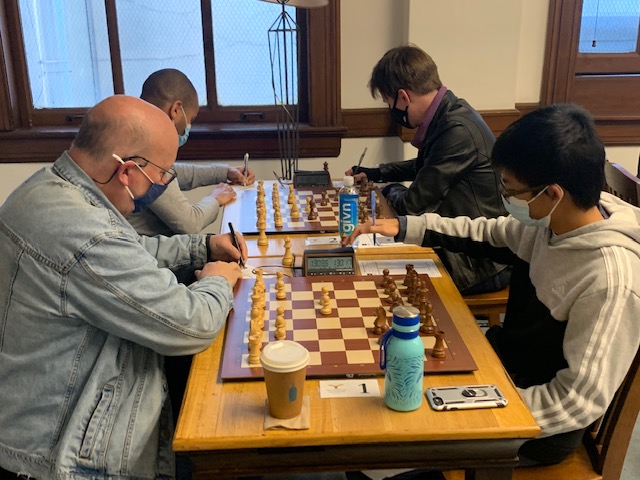 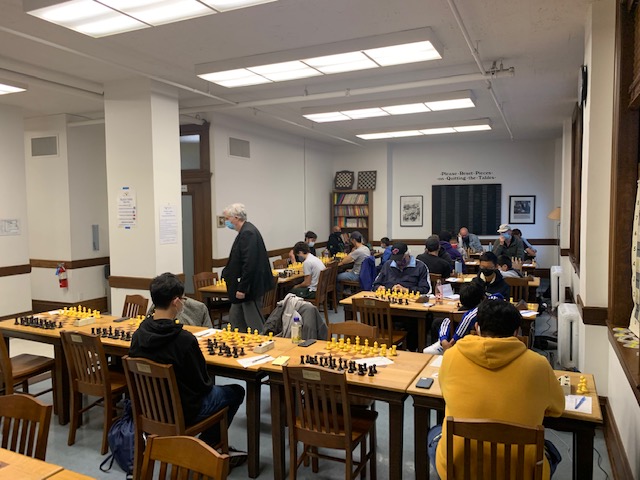 One player we will be following is Tianmu Wang. This 9-year old has been rising sharply over the last few months and had an impressive overall performance scoring 2.5 and raising her rating to 1088. 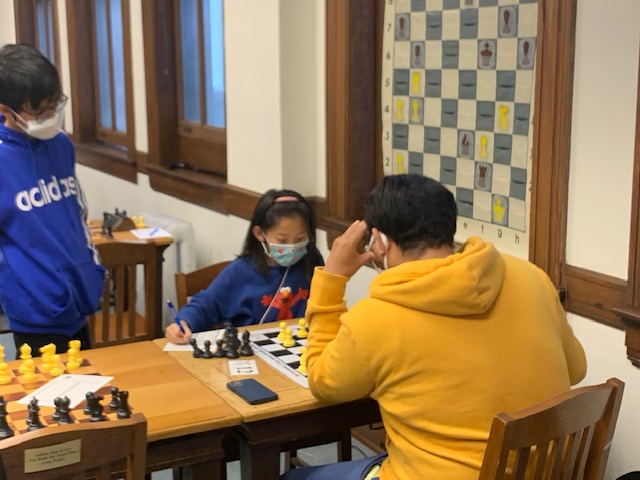 We want to thank the entire chess community for their continued support of our events, and we hope everyone had a Happy Thanksgiving.

Tony is back and ready to challenge you to solve this problem: white to move and draw! 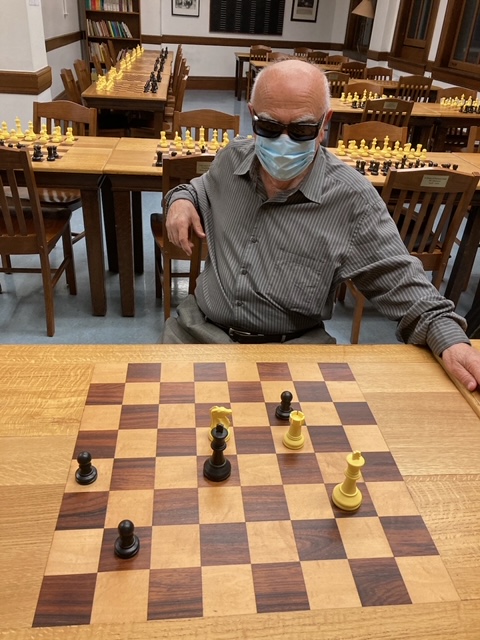 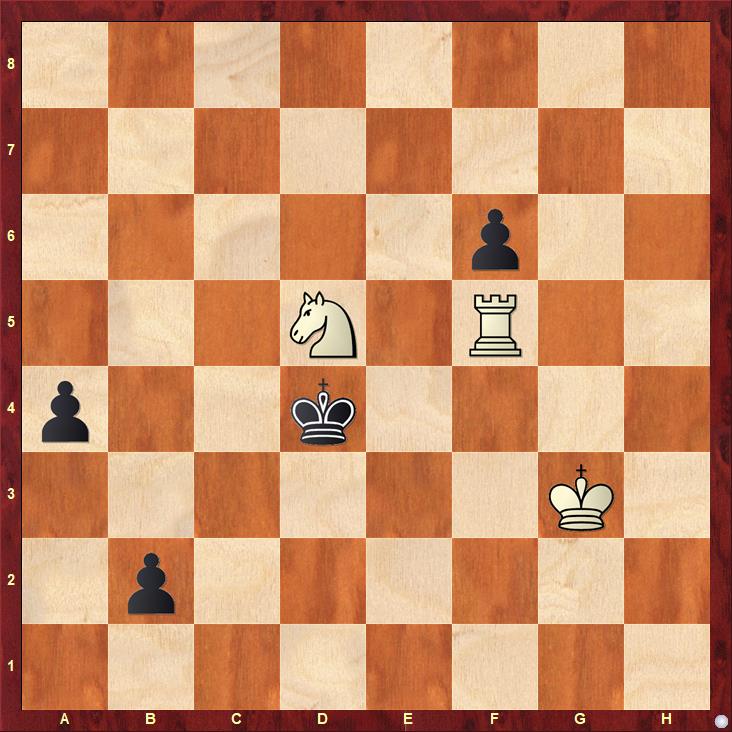 Problems in the Opening, Part Three

Last week I touched on a few different ways to approach the opening, and here’s another idea for you: play something you’ve never tried before!  Playing an opening for the first time (even with just a cursory look at a few lines) is a great way to get psyched into a game.  You get a fresh look, the configuration of the pieces on the board is different than what you’re accustomed to, there are new problems to be solved – chess feels new again.

Of course one must be careful.  Trotting out the King’s Gambit without studying a thing about it is a sure-fire way to land in hot water.

A few years ago I was paired with a strong master in the Tuesday Night Marathon. I played black, and I knew that he liked to play g3 systems against the King’s Indian.  Fair enough, I feel comfortable in those positions. But there was no doubt that he was far more booked up than I, and I wanted to make the game a fight that was not based on who knew more theory.  I noticed he played 2.Nf3 on the second move rather than the more common 2.c4, and that gave me an idea: I’d take him out of his book on move two!  And that’s what happened. 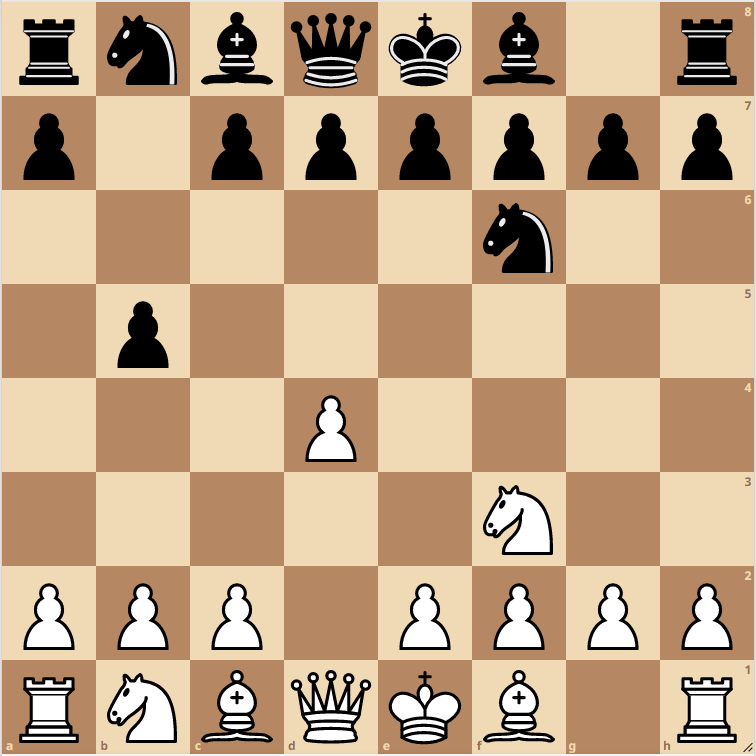 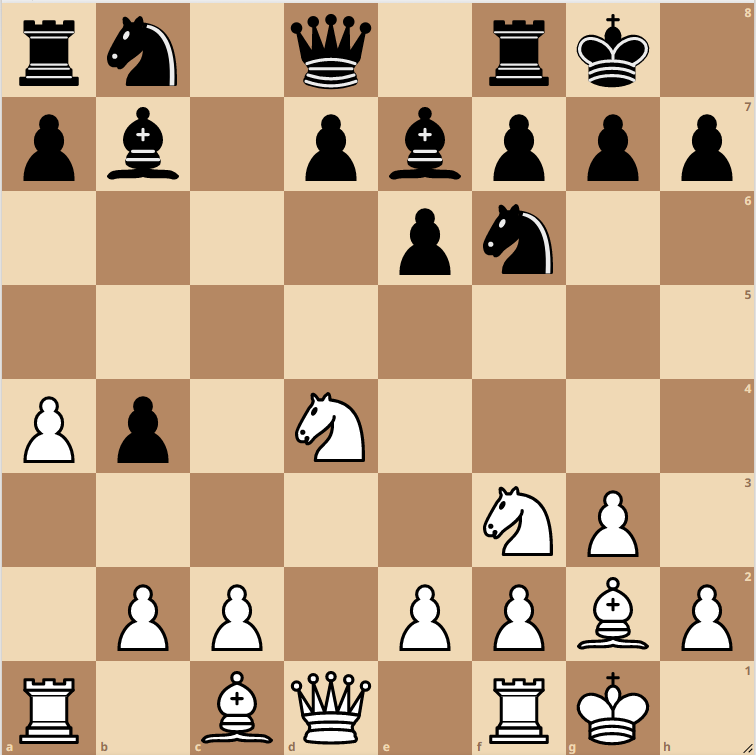 The opening has been a success for black. The pawn structure resembles a superior Sicilian Defense. 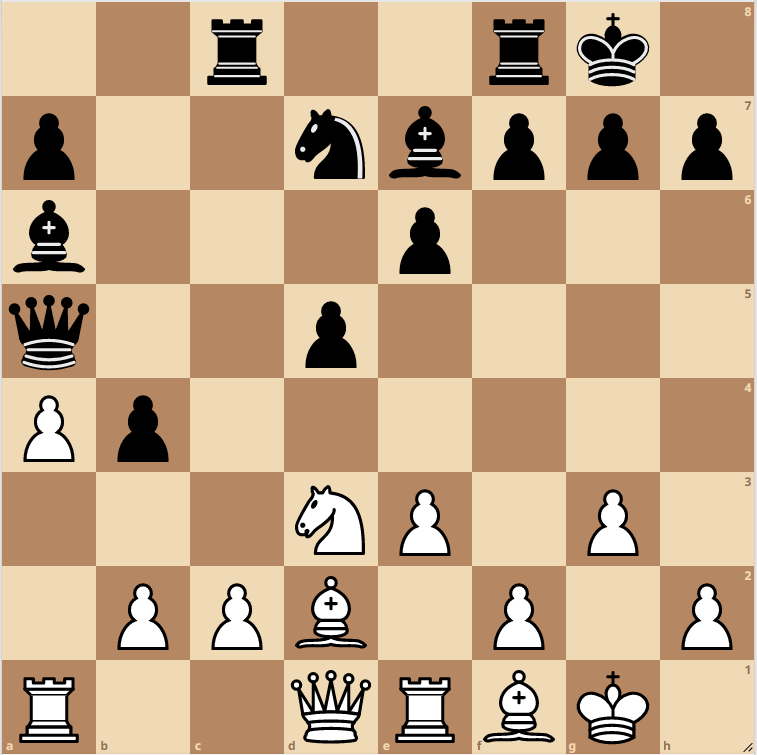 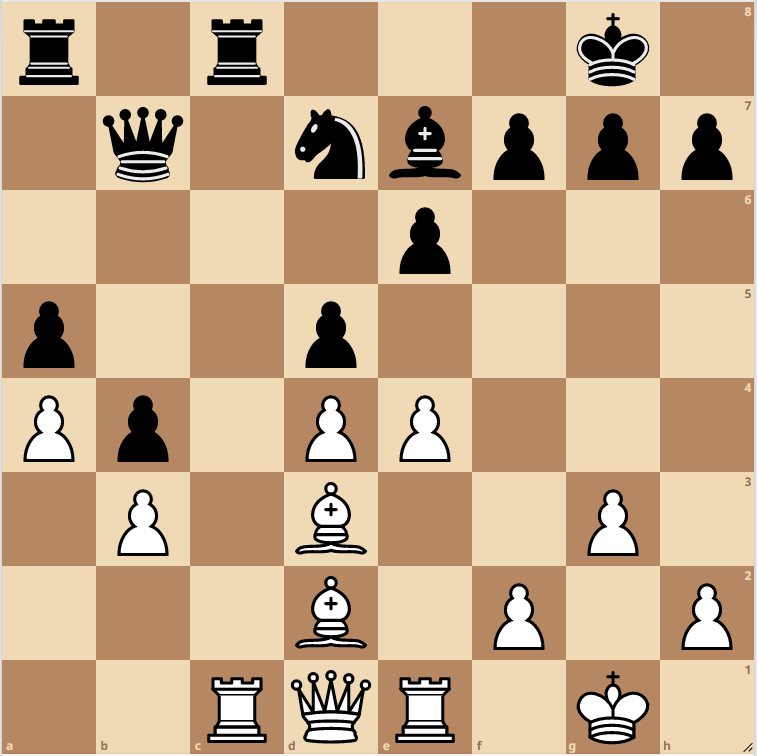 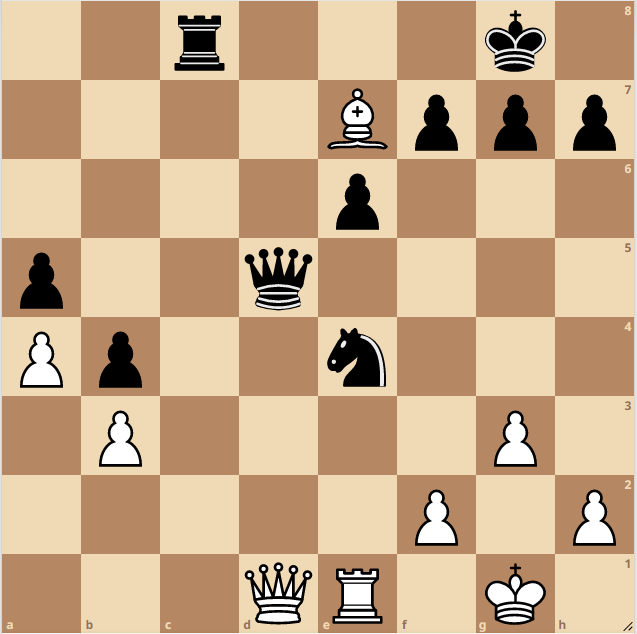 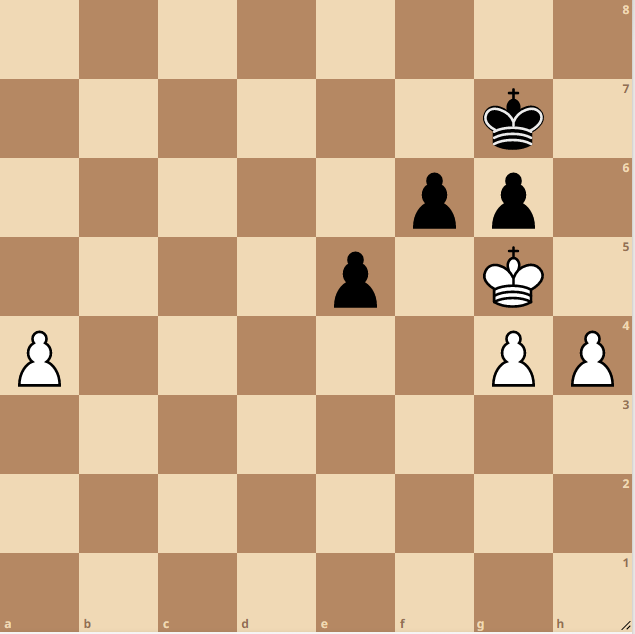 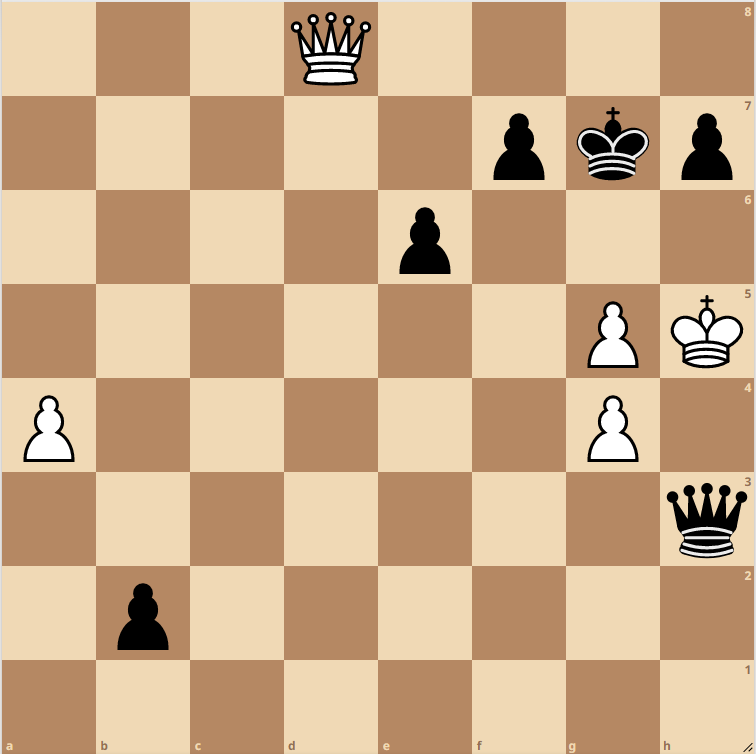 (This article was written prior to game 6 on Friday)

The World Championship in Dubai has started out with many draws (again). The 2018 World Championship had all twelve classical games drawn, and the 2016 match before that had 10 draws from 12 games. Why can’t Magnus, a super world champion, win games? I must put forth the theory that he isn’t risking enough – he doesn’t play these matches with the brash, fearless energy of his youth or the hallmark courage of Tal, Fischer, or Alekhine.

You may ask who am I (or anyone else for that matter) to tell Magnus what he should do to retain his title when he has been the king of the last decade and survived every challenge. It is true that Magnus knows more about chess than anyone on the planet. I say this isn’t enough for a world champion. The champion has millions of fans following the quest to be king and one needs to show them a fascinating fight for the good of chess.
What good to be champion if fans lose their interest and don’t watch?

Alright, it is hard to always put yourself at risk and besides there are two players in a game. Yet the challenger feels happy just to be in the match and a true champion embraces the fight. Magnus doesn’t need to choose super risky lines. He just needs to not avoid risks, and also (probably the most important) to fight to the bitter end. We give below the two first match games in which Magnus had White where we would expect him to show his worth.

What to do here? What would Bobby Fischer have played? The black a-pawn is very dangerous, but the white rooks and knight have chances for a mating attack with the black king hemned in. 32.Ne8+ Kg8 33.Nf6+ Draw? Even commentator Peter Leko (super solid reputation) was disturbed by this finish. You cannot claim to be the best chess player in history when you leave so much play in a game. This may be a very practical match decision to keep the score leveled, but spectators want more. White could have continues on move 32 with 32. Kg2 or 32. h4 and is certainly not worse, though there are risks for both sides. Maybe someone must lose a game before the real fighting begins. 1/2-1/2