Lynn Verge has been Executive Director of Montreal's Atwater Library and Computer Centre for the past eleven years. She has made substantial progress in meeting the organization's goals of "creating a buzz" and stabilizing finances. She joined when the coffers were so bare that the small paid staff had taken reduced hours. Previously, she had practiced law in her native Newfoundland and Labrador, where she also had a lengthy career in provincial politics. She was Minister of Education (1979-1985), Minister of Justice and Attorney General (1985-1989), and Leader of the Opposition (1995-1996). Before and after her years holding elected office, she was an active volunteer with women's and arts organizations. 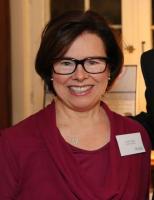