After more than a year of Friday night CinemaLit discussions on Zoom, we're going live again at the Mechanics' Institute screening room. Join us at 6pm for a film followed by a lively discussion. Concessions have returned, along with wine service!

The musical film version of Fiddler on the Roof is fifty years old. If anything, it now looks and sounds better than it did on its premiere in 1971. The story of Tevye, a poor Jewish dairyman "scratching out a living" to feed his family as tsarist Russia moves toward revolution, is more relevant and moving than ever. The film is filled to capacity with great songs, including "Tradition," "Matchmaker, Matchmaker," "If I Were a Rich Man," and "Sunrise, Sunset." It continues to speak to matters critical to the modern world - religion and religious intolerance, family bonds, marriage rights (and rites), dislocation and exile, and the maintenance of cultural identity in an ever changing world. But Fiddler's somber themes never overwhelm its abundant humor, heart, and spirit of celebration. L'Chaim! 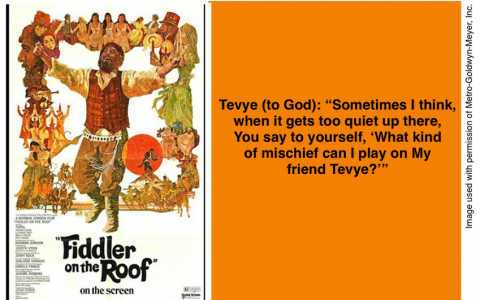