Before our modern transportation systems, cities in the United States were about as large across as the distance a person could walk. As technology advanced after the Civil War, the horse-bus became the preferred method of transportation and cities began becoming larger. After witnessing a horsecar accident, Andrew Smith Hallidie, a San Francisco resident, put his knowledge of Gold Rush ore mining using steel rope into use with the very first steam driven public transportation system. On Clay Street in 1873, the first cable car was successfully put into action and began our ride through history. Hallidie's inspiration would soon become the transport for the country and the rest of the world. The 1906 earthquake and fire nearly ended its use, as did its consolidation and bribes to city politicians. Finally, it took the leadership of a woman to save the last working lines in the world from a city seemingly resigned to live without its historic transport. Ride along on the ropes with historians and the people who still work with the cars every day. At over 140 years old, the San Francisco Cable Cars are a moving monument, a snapshot of nearly lost technology, a romance story, and the very heart of The City.

Strephon Taylor is an artist and musician who has been producing movies since 2010 through his own company, November Fire Recordings. His previous release, Jack Pierce, The Maker of Monsters, recognizes the life and accomplishments of the oft-forgotten creator of the famous Frankenstein, Mummy, and Wolfman makeups and is the latest of his features celebrating the sci-fi and horror genres. One series of his documentaries was done in conjunction with local filmmaker Tom Wyrsch and highlights Lands End features in San Francisco: Remembering Playland, Sutro's: The Palace at Lands End, and The Cliff House and Sutro Heights. Throughout the creation of these movies he has cultivated his fondness for local lore and he shared wacky, spooky tales of San Francisco as a character on KOFY TV20. In San Francisco Cable Cars, he makes the fascinating history and engineering of this icon available to the public. 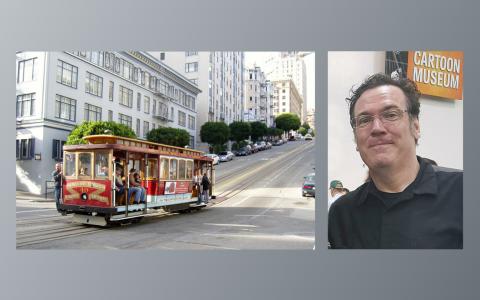