The Writers' Lunch: Writing About Your Nearest and Dearest | Mechanics' Institute

The Writers' Lunch: Writing About Your Nearest and Dearest
moderated by Sheryl J. Bize-Boutte

This event will be conducted via Zoom. Register and you will be emailed the Zoom credentials.

This month join librarian Taryn Edwards and author Sheryl J. Bize-Boutte for a discussion of a very important skill: how to write about your nearest and dearest without getting into trouble. Learn tips and tricks for telling the truth, being discrete, and mitigating the fallout.

Isidra Mencos was born and raised in Barcelona. She spent her twenties experimenting with the new freedoms afforded by the end of Franco’s dictatorship in Spain while immersing herself in books and dancing. She freelanced for prestigious publishing houses, traveled the world as a tour leader, and worked for the Olympic Committee. In 1992 she moved to the US to earn a Ph.D. in Spanish and Latin American contemporary literature at UC Berkeley, where she taught for twelve years. She also developed her own business as a writer and editor for Spanish-speaking media. After a 10 year stint in the corporate world, managing teams in several countries, she quit her job in 2016 to dedicate her time to creative writing. Since then, her pieces have been widely published in literary journals and general interest magazines, from Chicago Quarterly Review to WIRED, and she has been listed as a Notable Essayist in The Best American Essays anthology. In October 2022 she released her book Promenade of Desire—A Barcelona Memoir (She Writes Press), a sensual coming of age story tracing her journey from repressed Catholic virgin to seductive Mata Hari, as Spain transitioned from dictatorship to democracy. Today Isidra lives in Northern California with her husband and son. Find out more at  www.isidramencos.com/

Joan Gelfand is a writer, coach, and activist. Her reviews, stories, essays and poetry have appeared in over 150 national and international literary journals and magazines including the Los Angeles Review of Books, San Francisco Chronicle, PANK!, the Huffington Post, Rattle, Levure Litterarie, Voice and Verse, Sycamore Review, Prairie Schooner and The Meridian Anthology of Contemporary Poetry. The recipient of numerous writing awards including two Pushcart nominations, and the Women’s National Book Association’s Effie Lee Morris Prize, Joan’s poem “The Ferlinghetti School of Poetics” was made into a short film by Dana Walden. The film featured at 20 international film festivals and was awarded “Best Poetry Movie” at the World Film Festival. You Can Be a Winning Writer: The 4 C’s of Author Success, Joan’s book for writers (Mango Press) is a #1 best seller on Amazon. Extreme, Joan’s debut novel was published by Blue Light Press in July, 2020. She also has an essay in Chicken Soup for the Soul: My Wonderful Wild Family. Joan lives in San Francisco with her husband Adam Hertz and two beatnik cats – Jack Kerouac and Lawrence Ferlinghetti. Find out more at www.joangelfand.com/

Francine Thomas Howard, born in Illinois, and a child transplant to California, is a proud product of the San Francisco Public schools. A rarity among writers, her first love was not writing, but the sciences. She received her degree in occupational therapy from San Jose State, and her Masters in Public Administration from the University of San Francisco (USF). She enjoyed a rewarding career treating children with physical disabilities, and working with their families on long term goals. Children with cerebral palsy comprised the majority of case load. She often reminds others that differently abled children are not aware their physical abilities are considered negative, until they are taught. That revelation, along with the insistent voice of her long-deceased grandmother, combined with driving love of history and genealogy demanding to be heard, may well have been the driving factors that nudged her to leave occupational therapy and start combining oral histories, family research, and DNA into written form. Find out more at www.francinethomashoward.com/

Award-winning author and Pushcart Prize nominee Sheryl J. Bize-Boutte is an Oakland multidisciplinary writer whose autobiographical and fictional short story collections, along with her lyrical and stunning poetry, artfully succeed in getting across deeper meanings about the politics of race and economics without breaking out of the narrative.  Her writing has been variously described as “rich in vivid imagery,” “incredible,” and “great contributions to literature.” Her first novel, Betrayal on the Bayou, was published in June 2020 and a poetry collection she has written with her daughter Dr. Angela M. Boutte, titled No Poetry No Peace™, was published in August 2020 and is the namesake of the No Poetry No Peace™ series at the Mechanics Institute of San Francisco. Her in progress novel first chapter, “The Burden Keeper,” was the 2021 fiction category winner for the San Francisco Writers Conference writing contest anthology. An inaugural Oakland Poet Laureate runner-up, she is also a popular, teacher, literary reader, presenter, storyteller, curator, and emcee/host for literary and poetry events. Find out more at www.sheryljbize-boutte.com/

The Writers' Lunch is a casual brown-bag lunch activity on the 3rd Friday of each month. Look forward to craft discussion, informal presentations on all forms of writing, and excellent conversation. Please contact Taryn Edwards if you have any questions or if you would like to be a panelist - [email protected] 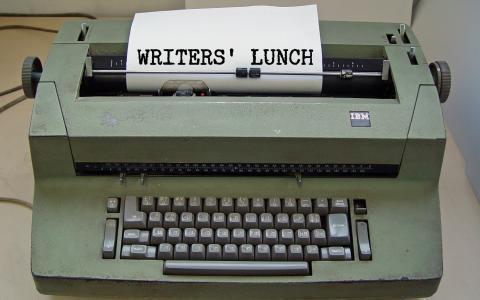