Chess is a playing field for life, where one can develop character, sportsmanship, and even grace. People who meet across a chessboard have an opportunity to interact on a very civilized level. They must put aside differences of religion, ethnicity, nationality, language, and sex, and compete solely on the basis of skill.

FIDE Master Andy Lee moved one step closer to becoming an unprecedented winner of three consecutive Tuesday Night Marathons by defeating International Master Elliott Winslow in round 8 of the Jay Whitehead Memorial Tuesday Night Marathon. Lee, who is now rated over 2380 USCF, has 7 out of 8, with his lost point coming from two half-point byes.

He will face Pranav Nagarajan, a high school student from north of the Golden Gate Bridge, who could be rated over 2200 for the first time if he does well in his game with Lee.

Nagarajan has 6½, putting him a half-point ahead of four players on 6–2. They are International Master Winslow, National Master Uyanga Byambaa, and Experts Demetrious Goins and Steven Gaffagan.

From round 8 of the Whitehead Tuesday Night Marathon:

The Mechanics’ entry in the United States Chess League avenged its loss to Miami in last year’s playoffs by beating the Sharks 3½-½ last night. Daniel Naroditsky drew with fellow Grandmaster Julio Becerra on board one, International Master-elect Yian Liou beat Grandmaster Renier Gonzalez with Black on board two and FIDE Master Cameron Wheeler and NM Siddarth Banik continued their winning ways, with wins on board three and four. The Mechanics’ are now third in their six-team division at 3–2, and face Arizona next Tuesday night.

Visiting Romanian Grandmaster Ioan Christain Chirila, currently living in El Cerrito, scored 9 from 10 to win the five double-round Swiss, which was held with a time control of five minutes a side plus two-second increment. He won $300.

The 23-year-old Chirila, a graduate of the University of Texas at Dallas, drew his second-round match with National Master Jimmy Heiserman of Castro Valley, and won his last three matches 2–0, defeating IM Ricardo De Guzman in the penultimate round and Grandmaster Patrick Wolff in the final.

Chirila beat Wolff with White in their first game but had his hands full in the second.

18...Rc8 has been played exclusively in this position by strong players like Fressinet and Bruzon. The text doesn’t appear sound, but requires energetic play by White to refute it. Patrick is up to the task. 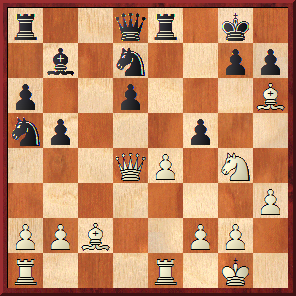 Shades of Browne-Bisguier, 1974 U.S. Championship, but objectively 19.Ne3 fxe4 20.Nf5 might be stronger, with a clear edge to White. 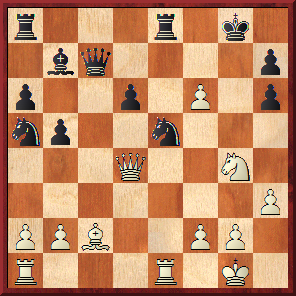 21...Kh8 was correct, with complicated play and equal chances. 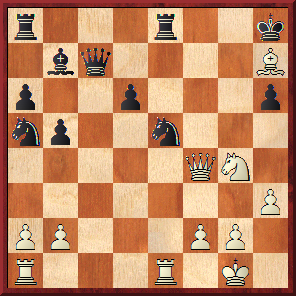 Grandmaster Daniel Naroditsky and U.S.C.F. Senior Master Arun Sharma watched this game with interest, as they had both won their last round matches and had 8½ points. If Wolff won they would have tied for first, but as it was they shared second and third places, good for $150 each.

The Neil Falconer Memorial Blitz was made possible by the generosity of Grandmaster Patrick Wolff, who helped sponsor the event. Thanks to Jules Jelinek and Vladimir Naroditsky who helped to make the event run smoothly.

A complete crosstable for the event can be found at http://www.chessclub.org/archive.php?y=2014&t=club-events&e=x16.FalconerBlitz1Standings.

De Guzman was tough on the entire Manvelyan clan, as he also beat Hayk’s father.

Mystery solved! Last newsletter we reported on the simultaneous exhibition that Yugoslav Grandmaster Svetozar Gligoric gave at the Mechanics’ on March 4, 1971. We published the following game and asked for help in identifying the player who had Black.

Alan Benson, who was a spectator at the Neil Falconer Memorial Blitz this past Sunday, brought in his scoresheet identifying him as the mystery man. Alan remembers that Gligoric blundered with 19.Nxe4?, even though he had his longest think of the game (45 seconds) at that juncture.

Congratulations to six-time United States Chess Champion Walter Browne for winning the 2014 U.S. Senior Open, held aboard a cruise ship in the Caribbean this past week. The Berkeley Grandmaster scored 5½ from 6. Go to http://www.vegaschessfestival.com/senior2014/results.php to see the crosstable.

Several Mechanics’ U.S. Chess League team members are playing in South Africa right now. Grandmaster Vinay Bhat has 4½/6 in the Durban Open with five rounds left to play. Seeded seventh in the 90-player field, which has 14 GMs competing, he is currently tied for fourth place.

Vignesh Panchanatham has 4 out 6 in the Under-14 section in the World Youth Championship being held in Durban, while Hans Niemann has 3 points in the Under-12. The big Bay Area story in that section is Rayan Taghizadeh, who is tied for first with 5 from 6.

Mechanics’ Institute Grandmaster-in-Residence Nick de Firmian is one of the U.S. coaches for the event, which ends in late September.

At the Wednesday night blitz last week, we had 8 players; the results were

Zuckerman is leading in the club championship as this game is being annotated. He has been specializing more and more on openings. When showing this pretty game to the annotator he let loose a deluge of quotations and suggestions, part of which are used here. His approach to openings is encyclopedic, just as Gruenfeld’s used to be. Some connection between the two is, by the way, also indicated by their handwritings, which are amazingly similar.

Fischer worked on My 60 Memorable Games for over four years and produced several drafts during this time. Some of the changes were minor, but in other cases he made drastic revisions. Here are a few of the latter.

Tal has an annoying habit of writing down the move he intends to play before making it. As a consequence his scoresheet is an eyesore. He usually write lemons down on the first draft, reserving the move he actually selects until somewhere around the fourth chicken scratch. Unfortunately, the temptation to glance at his scoresheet is overwhelming; I got excited when I saw him write down 20...Ra5 21.Bh5 d5 (21...d6 22.Rxd6!) 22.Rxd5 exd5 23.Re1+ wins outright.

Only the variation survived the final cut for publication.

The following note from the draft was completely cut from My 60 Memorable Games, but something similar was published in Fischer’s notes to the game in early 1964.

On the last occasion, referred to above, my opponent played 4...Bc5!?, alias the Wilkes Barre Variation. At that time I was quite unfamiliar with it and nearly laughed out loud at the thought of my opponent making such a blunder in a tournament of this importance! I was just about to let him just have it when I noticed that he had brought along a friend who was studying our game very intently. This aroused my suspicions: maybe this was a trap, straight out of the book. But a Rook is a Rook -- so I continued with 5.Nxf7 and there followed 5...Bxf2+! 6.Kxf2 Nxe4+ 7.Ke3 Qh4 and, somehow, I got out of the mess with a draw. I had no chance for first place and my trophy for the best scoring player under 13 was already assured, since I was the only one under 13!