History of the People's Tournament: Part 1 - Next Week July 18

The Tuesday Night Marathon has returned, and we held rounds one and two of this modified, online Tuesday Night Marathon (TNM). This event is a 3-week event that has six rounds in total, with a time control of G/35 +2, and is USCF-online rated. Each week there will be two rounds played, and players are paired manually on Chess.com according to their standard over-the-board USCF rating. There are also two sections and a prize pool, and the event was broadcast on our Twitch channel. It had every bit the feel of the TNM many of the players know and the excitement for this new event was definitely in the air. It was great to see the strong turnout and support, as 54 players registered, and we expect to have 60 players by the start of next week!

The games were manually paired by Chief TD Dr. Judit Sztaray on Chess.com. The round times were 6:30pm and 8:00pm, and the rounds started on time. Special thanks to Judit or handling this very busy part of the tournament, as she had to process results and troubleshoot players not in live chess at the start of the second round.

FM Eric Li showed his precice technical play against Simona Nayberg in round 2.

NM Ruiyang Yan showed her fierce attacking style in her 1st round win against Ryan Tiong.

Perhaps the most dynamic game of the match was this 2nd round matchup between Austin Mei and Ryan Wang. It certainly took up most of the second round broadcast commentary!

Another action packed game was this one between Tejas Mahesh and Roger Shi.

In the under 1600 section, Daniel Perlov and Charlene Kwok are the only players remaining perfect after 2 rounds. Here is a game from that section, a nice win by Liora Gizburg against Rahim Dharssi.

The broadcast was led by FM Paul Whitehead with myself (Abel) joining. We had a lively chat and the games were exciting. The pairings for round 3 which begins at 6:30pm on Tuesday July 14 will be posted by noon on Monday the 13th. To view the current standings and see the pairings when they are released, please follow this link: https://www.milibrary.org/chess-tournaments/tuesday-night-marathon-online-july-2020

We would like to thank all the participants and viewers of the broadcast. Everyone who has registered is supporting the Mechanics' Institute, and we are happy to be able to provide competitive chess online and broadcasting it to the entire chess community.

To watch the broadcast of the first 2 rounds, please follow this link: https://www.youtube.com/watch?v=I3GoIByo9LU&t=4002s 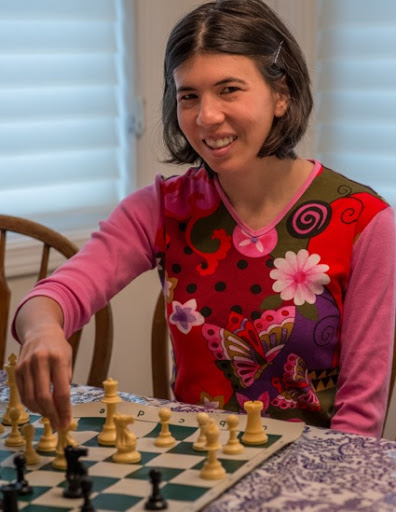 On Friday's Mechanics' Institute Chess Social we had author and chess coach Lauren Goodkind on the broadcast. She is a strong player and an advocate for women's and girls chess in the Bay Area. I asked her about her life, her coaching, what inspired her to write her books, and her experience with chess in the pandemic era. It was a great discussion and you can watch the interview by following this link: https://www.youtube.com/watch?v=WwDrrZp7xTY

The Mechanics' Institute had a strong win last week against the Iowa Pawn Stormers 17.5-8.5. We now have 3.5/6 in the league with 2 rounds to go. This Saturday at 10am we will face off in round 6 against the Stevenson High School Chess Club from Illinois. They are Illinois State High School champs and are looking for a top notch win against our historic club. Our players will be ready to put up a battle, and the match for the event can be found here: https://www.chess.com/live#tm=45390

Full results for our win against Iowa can be found here: https://www.chess.com/club/matches/live/mechanics-institute-chess-club-1/34816 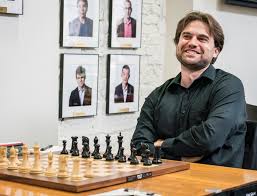 GM Sam Shankland will do a special online summer seminar July 13-July 15 from 9am -12:30pm. Take advantage of this opportunity to train virtually with one of the world's best chess players, who happens to be a Bay Area native and Berkeley and Mechanics' alum. For more info, please follow this link: http://www.berkeleychessschool.org/event/gm-sam-shankland-summer-seminars/

Here is another article in a series written by Dr. Alexey Root on Grandmasters and cooking, this time about GM Levon Aronian. The dish referenced in the article was from Aronian's late wife, Arianne Caoili, who tragically passed away in a car accient earlier this year. The dish is given further discussion by our very own NM Michael Walder. Enjoy the article here: https://en.chessbase.com/post/grandmaster-chef-levon-aronian 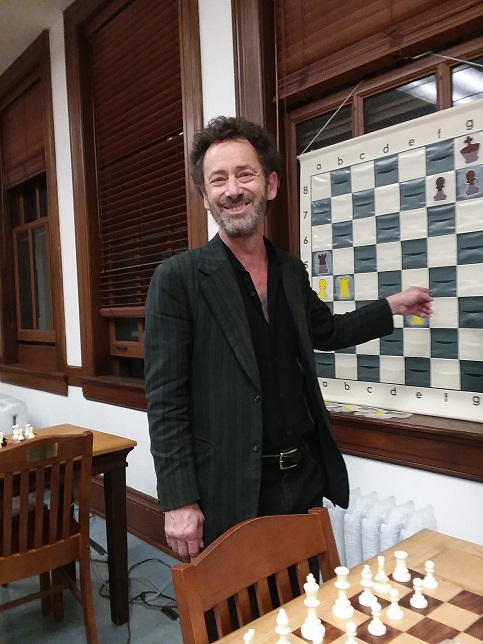 We are excited to announce a new online 6-week course offered by our very own FM Paul Whitehead that focuses solely on the part of the game that really seperates the masters from the club players. Here is the agenda for the course: 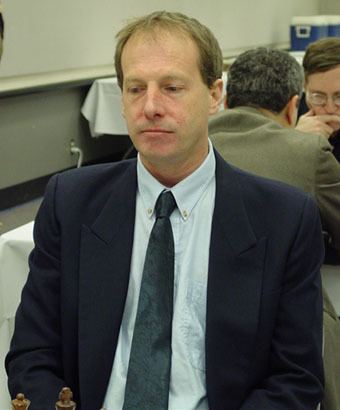 For players around 1400-2000, this class is for players looking to develop the thinking skills and techniques that bring their chess to the next level. The class will focus on the development of middle-game thinking, positional play, and endgame concepts, but will cover all areas of need, depending on the class. The class will be dynamic and interactive, so players really become involved in the class with GM de Firmian guiding instruction through lecture, going over games and through discussion. Students are also encouraged to bring games for discussion and analysis so that the whole class can benefit. Also encouraged is to investigate your specific opening problems, which students should bring to the forum.
Classes will be held online through Zoom. Take advantage of this great opportunity to train with our GM in Residence!
Class is on Thursday's 6:30-8:00PM
To register, please follow this link: https://mechanics-institute.jumbula.com/2020OnlineClasses_120/OnlineClasswithGMNickdeFirmian

This class is designed to help players who are 1000+ learn how to think and what to look for in games after the opening all the way through the endgame. Modeled after his own style of coaching, Paul uses games of students and current and historical games to discuss what players should be thinking about in order to get their chess to the next level. This class is dynamic, and encourages student participation and discussion. The goal is for students to understand the thinking so they can apply what is learned in their own games.

Students will need a Zoom account, and Paul will use an interactive board to conduct the class online. This will be a live class, not per-recorded. While this class is aimed at the active tournament player looking to rise in rating, it is suitable for everyone that wants to improve their chess by learning how a master thinks and sees games. Paul is a former U.S. Junior Champion and commentator on our Mechanics' broadcasts.

$25/class for a 90-minute class. MI needs a minimum of four students to host the class, and has a maximum of 12 students. 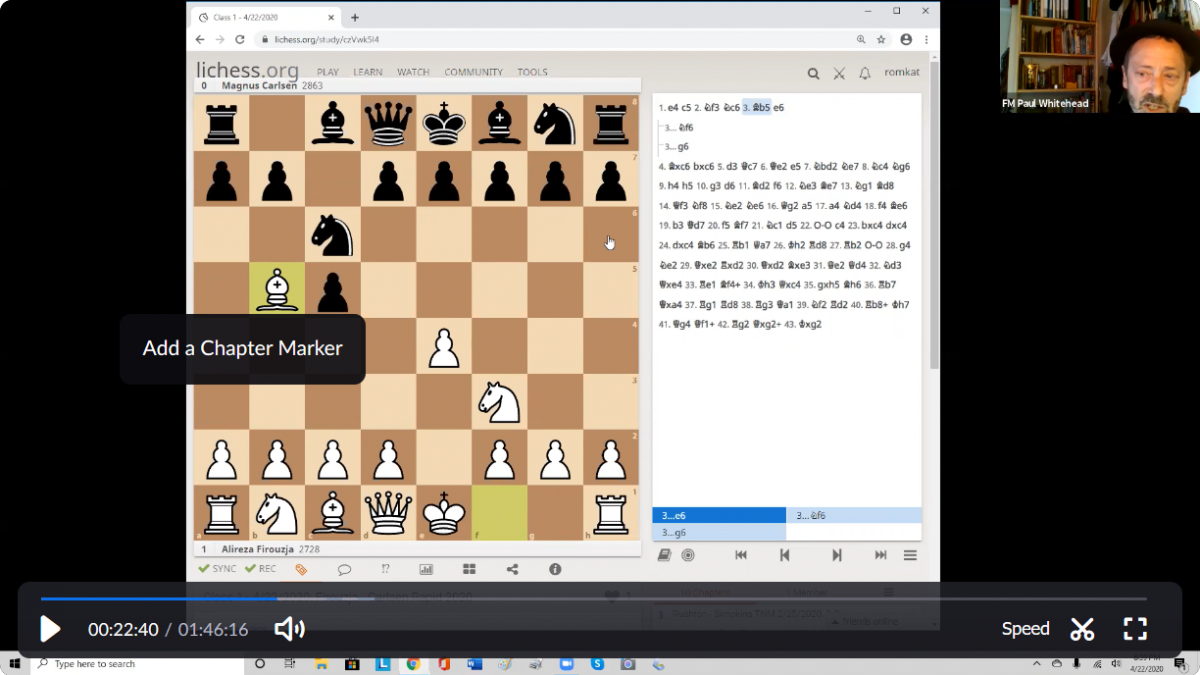 If you have any problems connecting with us on chesskid.com, please send us an email and we'll send you step-by-step instructions with pictures.

Scholastic Games Of The Week (games from our scholastic online tournaments)

June 1 through Aug 14 on selected weeks

If you have any questions, or need a sample of a class, please feel free to reach out to [email protected]

After writing a bit about John Grefe here: https://www.milibrary.org/chess-newsletters/873  (The Three Wise Guys), and then using one of his favorite expressions as the title of my last column here: https://www.milibrary.org/chess-newsletters/924#paularticle. I decided it was time to delve a bit more into his chess style, and showcase some of the “Greefsters” games and combinations.

John was a serious influence on my development as a player. We played five times, and I was only able to draw him twice. He used an active, forward-momentum style of play, employed sharp openings, a high level of tactical awareness and superb endgame technique. Grefe was right out of the Fischer school: your attempts to prove that 2 + 2 = 5  on the chessboard would be pointed out, laughed at, and then mercilessly destroyed.

Grefe’s heyday was the 1970’s, although he remained a powerful player, analyst, and coach throughout his life.  He wrote an excellent book, The Best of Lone Pine (1980), and was Walter Browne’s second at the Manila Interzonal in 1976.  Winning the 1973 US Championship (as an untitled player!) with Lubomir Kavalek was the highlight of a career that never quite took off afterwards, as John’s ambition seemed to wane.  John Grefe was awarded the International Master title by FIDE in 1975.

Richard Shorman interviews John right after he won the US Championship: http://www.chessdryad.com/articles/shorman/art_12.htm

I’ll always remember John for helping me out through a rough time back in 2013, right before he passed away.  He was part of my growing up in chess, one of my “brothers” in the chess world.

Finally, here are some positions – “practical shots for the tactical patz” - from Grefe’s games.

The positions get a little tougher as you move on to the next, but none are too difficult I think.

Rather than give solutions, I urge our readers to attempt to solve these on their own.

If you’re still stumped, write me at [email protected]

Or, better yet, find these games yourself on the Internet – and many other games played by this great American chess master. 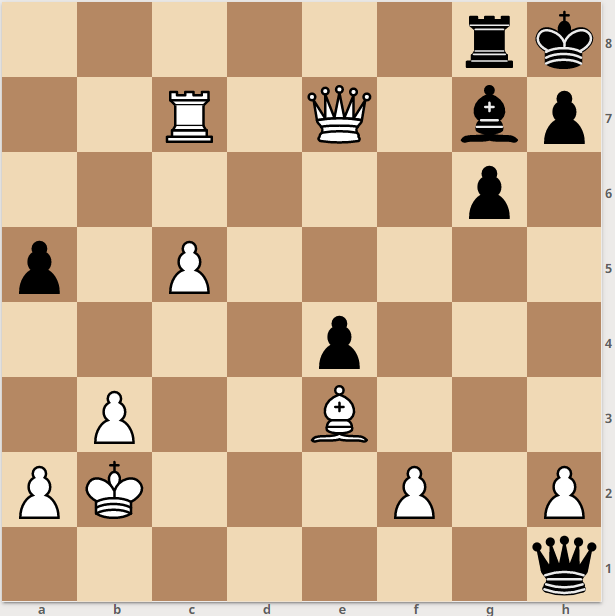 These Bezerkley residents and rivals played some tough games.  Can you find the sequence that knocked Tarjan out? 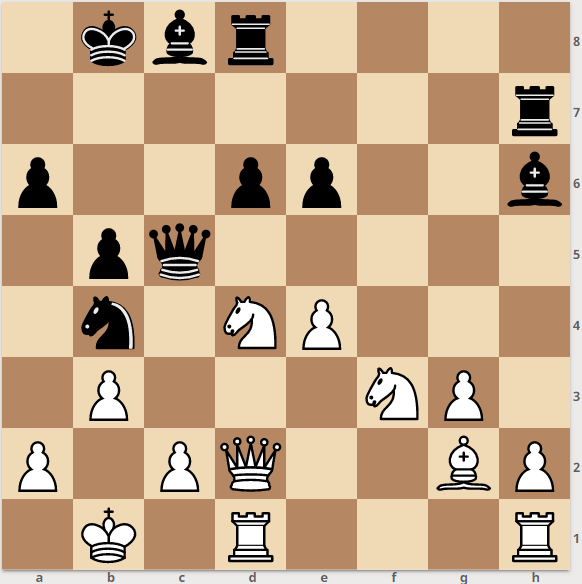 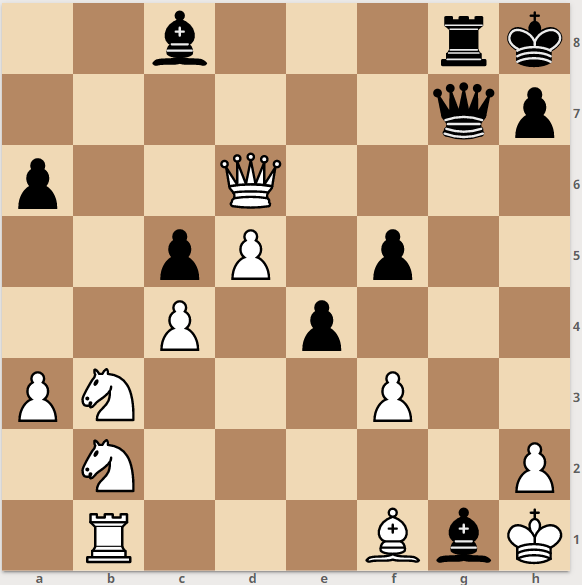 Not too difficult: finish white off, but be accurate about it! 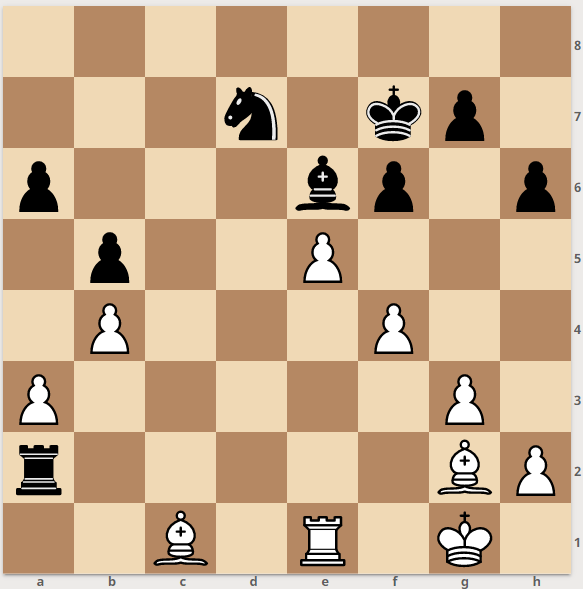 Remember: we are living in a material world! 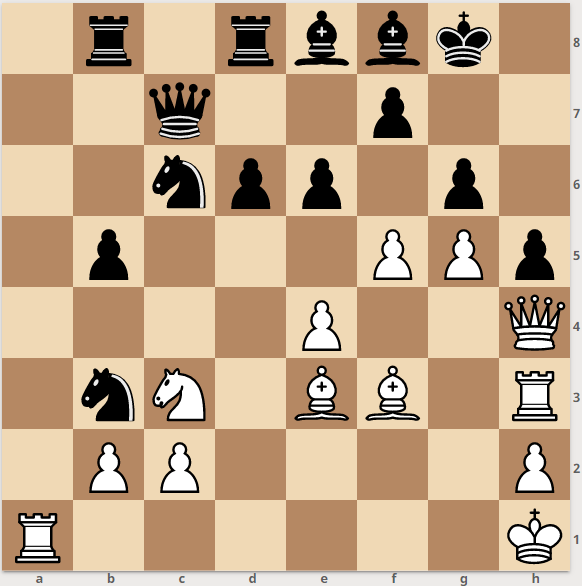 Black has just played 23…Nxb3, but had to resign after white’s next move. 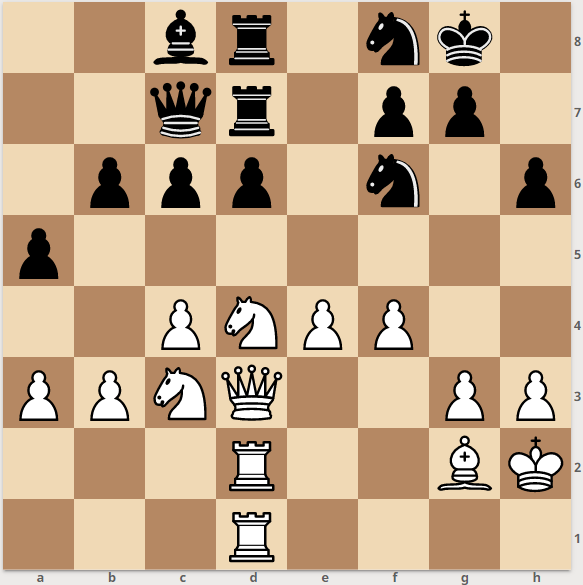 This one requires a bit of accurate calculation, after “seeing” the initial shot. 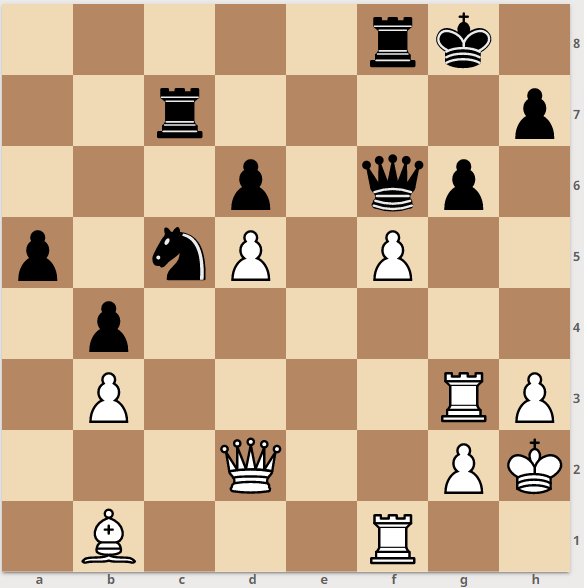 Does the move you want to play work? Calculate! 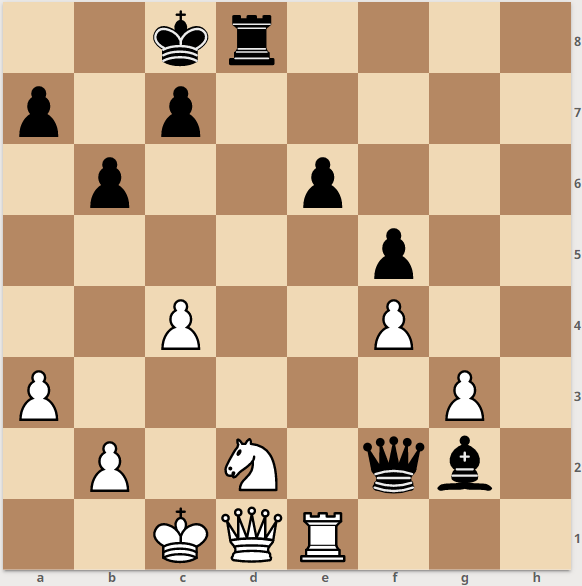 Take out the legendary Reshevsky with a nifty one-two punch. 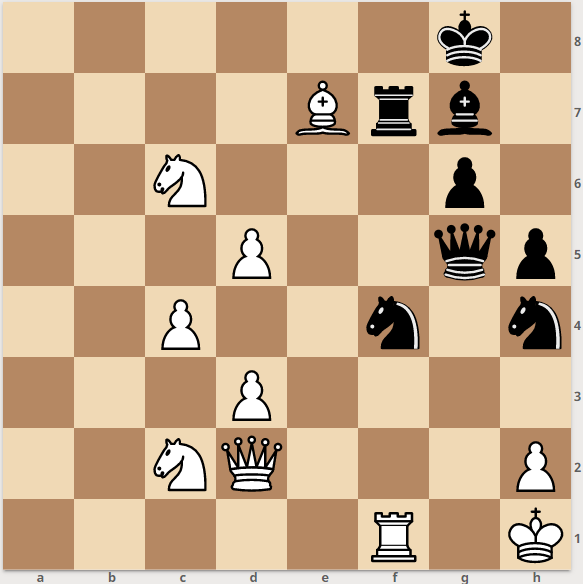 A volatile situation, yet black has a brilliant shot. Find it! 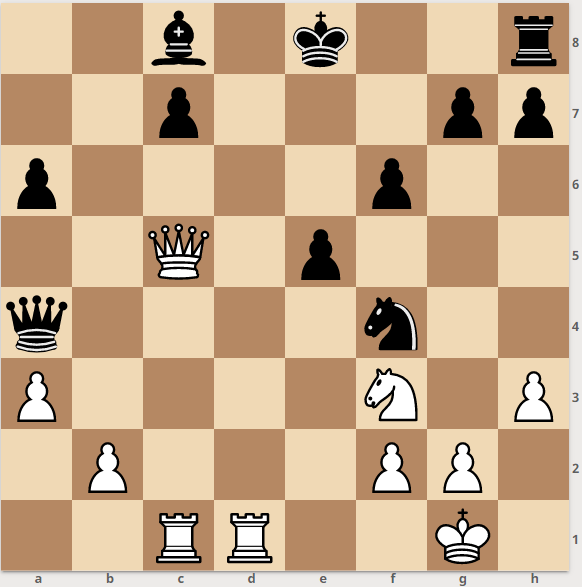 White is certainly much better after 1.Qxc7, for example.

But the old adage “if you see a strong move, look again for a better one” is second nature

for players of Grefe’s caliber. 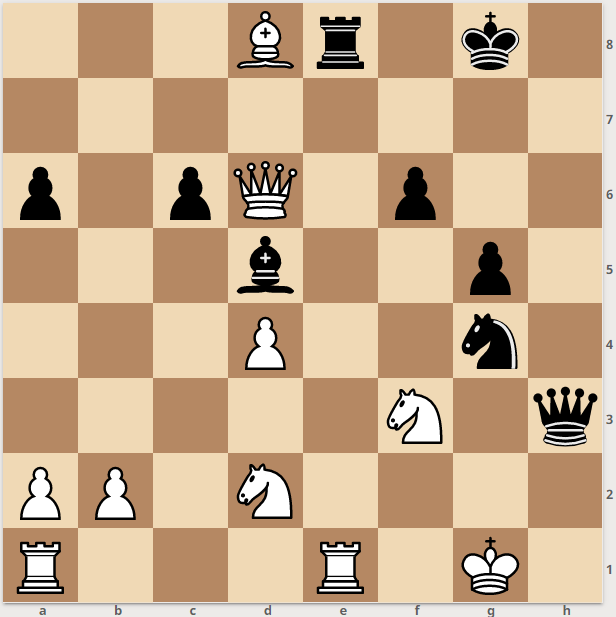 Black has a terrific move here – find it! 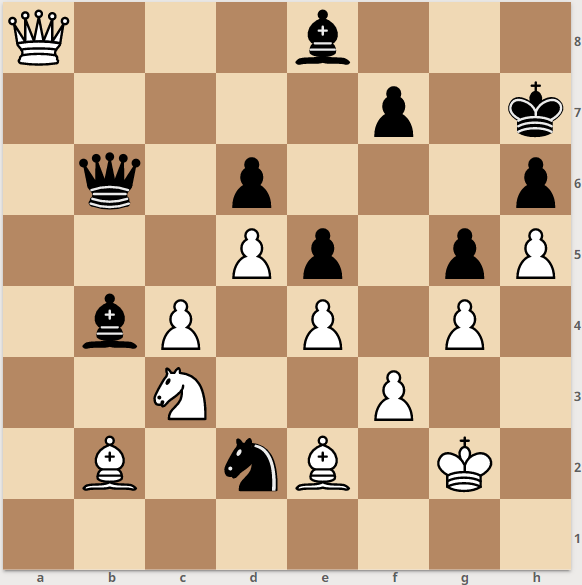 We end where we began, with another game vs. James Tarjan!

White has infiltrated with 52.Qa8 attacking black’s bishop on e8.