Saidy has an aggressive, positional chess style, which together with a fine knowledge of openings and a sharp eye for combinational possibilities make him a very dangerous opponent. He generally thinks deeply in the early stages of the game and as a result often gets into time trouble. Though a fine blitz player and an expert at “time pressure swindles,” Tony often pays the penalty for trying to cheat the clock. In the recent U.S. Championship, Saidy came tantalizing close to being the first American in four years to defeat Fischer, when a blunder just before the time control cost him the game.

—Anthony Saidy (who turned 78 on May 16), profiled by Charles Henin
in the September 1961 issue of Chess Life.

The form charts normally hold true in the first round, with the top half dominating the bottom, but this time around several lower-rated players rose to the occasion, with Tony Cole and Ben Joyce winning, and Andrew Handler, Jerry Simpkins, Pat Aquino and Ganesh Mathrubootham drawing. It’s still possible to join the 8-round Summer TNM with a half point bye for round one.

Grandmaster Sam Shankland gave a well-received lecture before round one of the Summer Tuesday Night Marathon. The topic was the 2015 World Team Championship, where Shankland played board one for the United States and held his own with some of the best players in the world. Next Tuesday, June 2, Grandmaster Surya Shekhar Ganguly, long-time second for former World Champion Viswanathan Anand, will give a lecture from 5:15 to 6:15 pm. This event is free and all are welcome to attend.

MI Chess Director John Donaldson gave a lecture at the World Chess Hall of Fame on Bobby Fischer’s career from 1955-1958 this past April. It can be viewed at https://www.youtube.com/watch?v=ryXC25T6U0U .

Thanks to Jean-Marc Mazzoni, Pete Neuwirth and Grandmaster Walter Browne for their recent donation of chess books and magazines. The Mechanics’ Institute is a 501(c)(3) organization, so donations are tax-deductible. Donations of books, sets, magazines and clocks are always welcome and will be put to good use.

The Wednesday Night Blitz series will take a break this summer resuming August 26th. Here are the results for May 6, provided by Jules Jelinek.

Tuesday Night Marathon regulars will well remember Dan Litowsky, who was a regular in the events from the early 1990s until the Fall TNM in 2011. That year he played over 50 USCF-rated games at the age of 94, which might be a record. One of the TNMs in 2011 was named after him.

The obituary which follows has been condensed. To see it in its entirety go to http://www.legacy.com/obituaries/sfgate/obituary.aspx?pid=174640928

Daniel was born in Brooklyn, NY, and raised in the south Bronx, where he became a skillful and passionate handball player, remaining very competitive until his sixties and winning numerous tournaments. In 1939, he joined the U.S. Army, and while stationed in the Canal Zone, Panama, he re-enlisted in the Navy for the duration of the war. He also married the love of his life, Angela, on May 29, 1942, and they were together until her death on August 23, 2002. He had learned to speak Spanish fluently, along with French, Yiddish, and Hebrew. He played chess at a competitive level well into his nineties, making him one of the oldest highly-rated active members of the US Chess Federation.

Daniel followed his military experience into the United Nations in an administrative capacity, travelling to various posts throughout Central and South America. He also served as a simultaneous interpreter in the General Assembly. He worked for private US businesses in Chile, Venezuela and in the Philippines. Daniel had a long and successful career with the State of California, retiring after more than 20 years of service as a budget analyst with the PUC, and later as Comptroller for Hastings College of Law.

The Mechanics’ Institute Chess Club’s longest-running tournament is just around the corner (June 6–7). Here is a list of previous winners, that includes many well-known names. The 1974 event, won by many-time Oregon state champion Clark Harmon, was the best-attended, with 117 entries.

Simple chess, going for a development advantage rather than trying to hang on to the pawn.

He’s gotta get some pieces out!

If you are in New York check out Fred’s bookstore, which is near the Marshall Chess Club.

The following win helped Bruce tie for first in the very strong 1974 Southern Open. Thanks to Peter Lahde for the following game.

For Players age 55 and over this weekend in Berkeley

Seniors, come enjoy the first City of Berkeley Senior Chess Championship. The tournament will be in two sections, an unrated section with no entry fee and trophies awarded to 1st, 2nd, and 3rd place, and a United States Chess Federation (USCF) rated section with an entry fee and cash prizes. Register no later than Friday May 29 (6:00-6:45pm).

Unrated section - free! Time limit 4 hours maximum per game.
Game will be adjudicated by tournament director after 4 hours.
Game forfeited after 30 minutes in the case of a no show.
Trophies for top three finishers.

This is from a game: 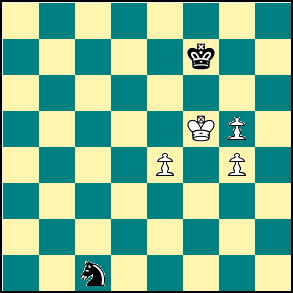 This position occurred in Bologan–Volkov, Moscow 2005. The game was drawn in 14 moves, after mistakes by both sides. However, Black can draw easily by 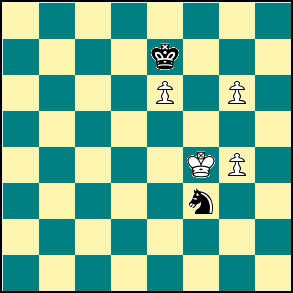