Notably, you’ve had the chance to train with Garry Kasparov. What’s been the best part of training with him?

I like to watch and listen to Kasparov and try to get into his mind to see how he thinks. He’s one of those unique players who is able to give many ideas at once. It’s hard to evaluate all of the ideas, but that’s part of what makes him one of the best players of all time, and it’s also what I really admire about him.

—Former Mechanics’ member Samuel Sevian interviewed by The Guardian.
For the full interview go to http://en.chessbase.com/post/the-guardian-speaks-to-sevian.

This past June saw four prominent California chess players die. Alan Benson was written about in Newsletters #708 and 710. Six-time U.S. Champion Walter Browne is remembered in this issue, while International Master Kim Commons and National Master Aaron Stearns will be featured in #712.

International Master Elliott Winslow maintained his full-point lead in the Summer Tuesday Night Marathon by defeating National Master Art Zhao this past Tuesday. Experts James Sun and Aniruddha Basak are tied for second with 5–1 scores in the 105-player event.

From round 6 of the Summer Tuesday Night Marathon:

Foster City Grandmaster Daniel Naroditsky, who starts his studies at Stanford this September, just started play in the 35th Benasque Open. Daniel is seeded sixth in the Spanish tournament, which has 31 other Grandmasters competing.

Sam Shankland finished fifth in the Edmonton International with a score of 6-3. The 10-player round robin was won by Indian super-Grandmaster Pentala Harikrishna, with the excellent score of 7½ points. Vassily Ivanchuk, Wang Hao and Surya Ganguly tied for second with 6½ points. Sam, currently ranked number 94 in the world at 2654.5 FIDE, lost 1.5 rating points, but also had three blacks in the four games he played against those who finished ahead of him in Edmonton.

Congratulations to Ashritha Eswaran, who took clear first at the 2015 US Junior Girls’ Championship (June 22–26) held in Tulsa, Oklahoma, with 6½/9. Ashritha, who first crossed 2200 in February 2014, but had been in a slump the past year and a half, had a tremendous result. She entered the 10-player round robin, which featured seven national masters, tied for the lowest-rated player in the field at 2143, but finished at 2223. This strongest-ever American tournament for female players under 21 was directed by Frank and Jim Berry.

The Politiken Cup, which starts in late July in Copenhagen, will have three West Coast Grandmasters in the field. Northern Californians Sam Shankland and Daniel Naroditsky and Portland-based James Tarjan will be competing.

The weekend of July 11 and 12 the Mechanics’ will feature a double-header, with the 15th Annual Charles Bagby Memorial G/45 on Saturday and the Tony Lama Blitz on Sunday. Details for the latter are as follows:

There will be book prizes for all participants.

Six-time U.S. Chess Champion Walter Browne died in Las Vegas on June 24 at the age of 66. It is impossible to convey all that Walter meant to American chess, in a career that spanned over fifty years.

Below are a few of the more prominent tributes that have appeared the last ten days. There are also a few links to interviews that Walter gave the last year of his life.

Grandmaster Lubos Kavalek writes about his old rival at: http://www.huffingtonpost.com/lubomir-kavalek/topalov-on-top-of-norway_b_7628218.html.

Dylan McClain’s piece in the New York Times can be found at http://www.nytimes.com/2015/06/28/sports/walter-shawn-browne-chess-grandmaster-dies-at-66.html?_r=0.

Walter’s talk with Yasser Seirawan in St. Louis last year is at http://www.thechessmind.net/blog/?currentPage=2. Dennis Monokroussos’ tribute to him can be found on the same page.

Macauley Peterson’s interview with Walter, which appeared in Chess Life last year, can be found at: http://www.uschess.org/content/view/13099/826/.

A short recap of Walter’s life and many tributes from readers can be found at http://www.uschess.org/content/view/13097/826/.

The following one from Mechanics’ Chess Club member Chris Mavraedis relates an anecdote that captures Walter’s insatiable love for the game.

“I’m greatly saddened by this news of GM Browne’s sudden passing. As a chess player I will miss his games and promotion of our fine game. But as a resident of the Bay Area and a friend of Walter, I’ll miss the man. He was a good man that lived life to the fullest. With his breakneck pace at everything he did, it not surprising that he flamed out suddenly. But if he had to go, passing in his sleep was a blessing.

It was in 1973 when I got into organized chess that I first saw Walter. He was a constant presence at local events for the next 43 years. I got to drive to Reno and back with him a few times and he was always an interesting passenger. We talked about chess of course. But we discussed many things on those drives and it was always engaging.

I will share one story of Walter. I was a minor sponsor of the Pan Pacific Tournament here in San Francisco in 1995. I sponsored the brilliancy prize through my tech company Epsilon Consulting Inc. The tournament and the brilliancy prize was won by the legendary GM Victor Korchnoi. At the final dinner, when it was announced that Korchnoi had won the brilliancy prize, Walter said loudly, “I didn’t know there was a brilliancy prize. Why wasn’t I told?” GM John Nunn immediately shot back, “Why? Would you have played more brilliantly?” Walter, without hesitation and with all sincerity, retorted, “Of course!” All of us laughed ... except Walter. He was dead serious! That was the essence of Walter—he was an uncompromising competitor that attacked chess and everything in life with the utmost passion. I will miss him. Rest in peace, my friend.

No player put more energy into their games than Walter. A true perfectionist who gave one hundred percent, Walter often found himself in time pressure. Normally a chronic shortage of time is caused by a lack of confidence, leading to one constantly rechecking variations. This was not the case with Walter, who always tried to reach the absolute truth in his games, calculating ever deeper to penetrate the secrets of the position. This energy-intensive approach was not always the most practical, but lead to some spectacular games, which can be found in Walter’s book The Stress of Chess, which contains 101 of his best efforts.

3) A chess poem from Dennis Fritzinger

we were chess players

we were chess players
once, and young;
our songs are sung,
our bells are rung.
our names, that once
tripped off the tongue,
are now less than
a heap of dung.
while victory strews
her wreaths among
the present gen,
-eration, strung
with ribbons and
with honors hung,
she has forgotten
how each rung
we climbed brought shouts
from every lung.
we are bereft.
we are down flung.
no more the crags
to which we clung
offer us footing;
where we swung
on clouds has closed,
and how it stung
when to us the
first news was brung.
all hail the youth
with backpack slung!
we too were chess players
once, and young.

As if a world-class chess club and the World Chess Hall of Fame were not enough, St. Louis has added a chess diner to its list of attractions. Yes, you read that right, a chess diner. The Kingside Diner http://www.kingsidediner.com/ opened on April 23. Serving breakfast all day and open until 3 am on weekends, it looks to be yet another reason to pay a visit to St. Louis.

Everyone knows Bobby Fischer played in the 1957 US Junior Open in San Francisco, and returned in 1964 to give a lecture and simultaneous exhibition at the Mechanics’ Institute Chess Club. Later, in 1980-81, he would spend several months in The City staying with Peter and Ruth Biyiasas and Jim Buff.

Bobby’s sister Joan lived in Palo Alto with her family for several decades and his mother Regina spent her last years there. What many may not realize is that Regina had an earlier connection with San Francisco. In the fall of 1960 she left the apartment at 560 Lincoln Place in Brooklyn that she had shared with Joan and Bobby for close to a decade and signed up for the “San Francisco-to-Moscow Walk for Peace” that left Union Square (just three blocks from the Mechanics’ Institute) carrying the pacifist message of unilateral disarmament and defense by nonviolent resistance across the United States, through parts of England, France and the Netherlands, across Belgium and East Germany, across Poland, and across the Soviet Union to Moscow.

Regina was the oldest member of the original group of 11 by far, at age 49, and there were misplaced worries the walk would be too much for her. She ended up walked almost all the way across the US and from France to Moscow, with her nursing and language skills (fluent German and Russian) proving quite useful. The group left San Francisco on December 1, 1960, and walked down the El Camino as they reached the Peninsula.

This was the first of the transcontinental U.S. peace walks and one quite accurately say that Regina Fischer not only talked the talk—she definitely walked the walk.

“An unusual exhibition game was recently played at the Steiner Chess Group quarters in San Diego, CA. A variation of the King’s Gambit: 3.... d7-d6, which Fischer has said refutes the gambit, was played. On the white side, playing one after the other, without consultation, were Larry Evans and William Lombardy. Black was Irving Rivise.”

“Horowitz points out that 15. ..., Ne7-f5 seems to hold the position, but then White could draw by perpetual check at least.”

In this study, the white g2-pawn looks vulnerable. How should White proceed? 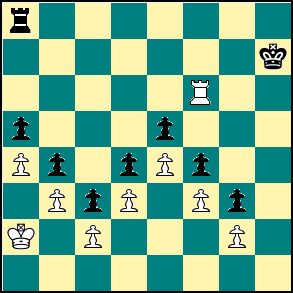 Since Black controls the h-file, due to the position of his king, his rook can penetrate after 2 Re6 Rh8 3 Kc1 Rh2 4 Kd1 Rxg2; White can’t get his king to f1 to protect the g-pawn in time.

In order to gain the tempi needed, White plays

The g-pawn is protected, for now, but 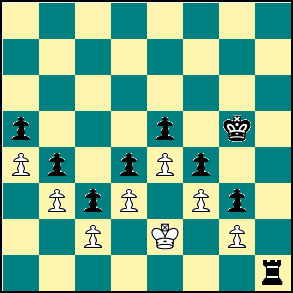 White gave up his rook to gain two tempi (Black made two extra king moves, compared with the first line above), but the black rook is poised to grab the c- or g-pawn.

Seeing all this, Black tries giving up his rook for the g-pawn: 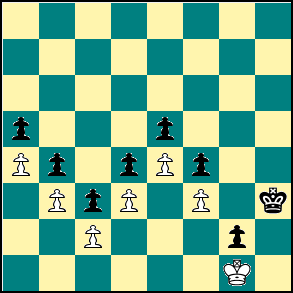 This is a draw, as Black either stalemates or gives up the g-pawn

Black has a different strategy, though. Instead of starting with 1 ... Kg7, he moves the rook first:

and White has both extra tempi he needs to reach f1 in time.