Undoubtedly, no one possesses the ultimate chess knowledge, but sometimes partial knowledge aided by strong concentration over the board can help us to discover components of knowledge that were previously unknown to us. The more motifs or ideas a player knows, the more likely he is to find what is appropriate for the needs of a certain position.

The newsletter will take a break the next few weeks, along with the Tuesday Night Marathon.
The latter will resume March 15 and newsletter #740 will appear March 18.

The 2016 Winter Tuesday Night Marathon will not only be remembered for its record-setting attendance (132 players, beating the previous Mechanics’ record of 121) but also for its dramatic finish. Natalia Tsodikova almost took home the first prize of $850 by herself after emerging from the early middlegame with a near-decisive advantage against fellow National Master Tenzing Shaw, but then a miscalculation nearly threw the game away and led to a tense ending that finished in a draw. This result opened the door for a group of National Masters trailing by half a point and James Critelli, Elliott Winslow and Josiah Stearman grabbed their opportunities to join the leaders. The five winners divided the top three prizes, receiving just over $320 each. 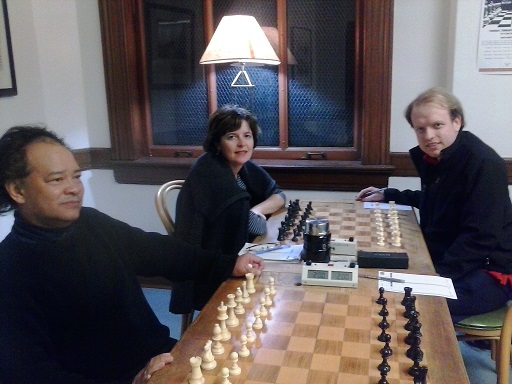 From round 8 of the Winter Tuesday Night Marathon:

The text looks over-aggressive, but is very much in the modern style. 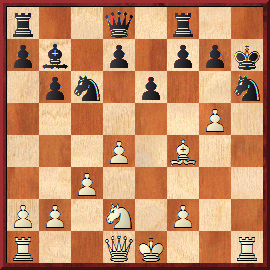 The next Tuesday Night Marathon starts on March 15, and Grandmaster Sam Shankland will give a free lecture from 5:15 to 6:15 pm that evening that all are welcome to attend.

Europe is home to hundreds of leagues, which are the heart of organized chess for amateurs and professionals all over the continent. While the United States doesn’t have anything comparable to Germany’s famous Bundesliga, we do have the U.S. Chess League (played via the Internet for over a decade). For old-school face-to-face chess there is the Chicago Industrial Chess League, dating back to the late 1950s, and New York’s Bankers League which was founded in 1917.

Along the lines of Chicago and New York the Mechanics’ Institute of San Francisco is trying to form an employee-based team competition in the heart of high tech. Thursday, February 18, six teams met at the Mechanics’ in a prequel to a full-fledged league.

The top team by rating was LiveRamp, with near-2300 masters Tenzing Shaw and James Sun on the top boards. They defeated Dropbox, which fielded strong Experts and Class A players, by a score of 3–1.

Here are the top two boards from the match. All games were played at G/55 with 5-second delay.

San Francisco area companies which are interested in joining the new league are encouraged to contact the Mechanic’s Institute Chess Club at [email protected].

Jules Jelinek won the Mechanics’ Wednesday Night Blitz held February 17 with a score of 11 from 12. Athur Ismakov was second with 10.

The US Amateur Team West held in Santa Clara, California (February 13-15) saw “Rainbow Unicorns” prevail after their final round victory over the BAC Dark Knights. The team consisted of

For more information on this event goes to https://new.uschess.org/news/rainbow-unicorns-only-in-the-us-amateur-team-west/.

Gata Kamsky of New York City won the recently-concluded giant Swiss in Cappelle la Grande with the outstanding score of 7½ from 9 (2806 performance rating). Grandmaster Kayden Troff of Salt Lake City and International Master Marc Esserman of Boston both turned in fine results with scores of 6½, good for performance ratings of 2635 and 2587 respectively. Konstantin Kavutskiy of Santa Clara had 5½ points.

The latest issue of the comic “Jill Trent, Science Sleuth” has a chess story in it called “Fianchetto’s Gambit”. It was written by Charley Macorn, with Michael R. Hall and Frank Barbara doing the art and D.M. Higgins the editing and lettering. The chess advisor was Mig Greengard, who grew up just north of Richmond, California, and is best known for being the person who puts Garry Kasparov’s ideas on paper.

World’s top players to compete in expanded tour with new events in Paris and Brussels-Leuven, featuring rapid and blitz

SAINT LOUIS (February 10, 2016) – The Grand Chess Tour announces two new tournaments for its second season in 2016 with the world’s top players competing for one million dollars in a mixture of traditional, rapid and blitz events in four countries.

The 2016 Grand Chess Tour season will include rapid and blitz tournaments in Paris and Brussels-Leuven in addition to the Sinquefield Cup and London Chess Classic.  The Grand Chess Tour is further establishing itself as the premier chess circuit in the world.

The Grand Chess Tour combines the organizational efforts of the four elite events into a unified competitive structure. The partnership aims to raise worldwide awareness for each prestigious tournament, as well as for the tour.

Participating tournaments are identified as the gold standard for international event organization, setting the model for player conditions, prize funds and spectator experience. Each of the events will cater to live audiences, as well as offer streaming broadcasts complete with grandmaster commentary.

Here the future International Master and world-class chess historian (specializing in chess played from the 1830s to 1860s) attacks the former World Champion with gusto.

Some sources give 20…Qg4, but the text is what was played.

Here is an ingenious king-and-pawn study. What result do you expect? 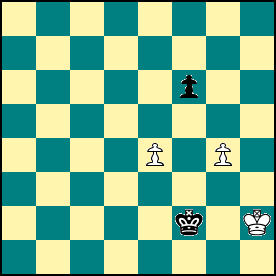 Simple: we’ll decoy the black pawn and promote one of our own. Our pawns are closer to the promotion square, and we have the first move as well. So 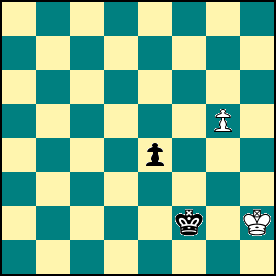 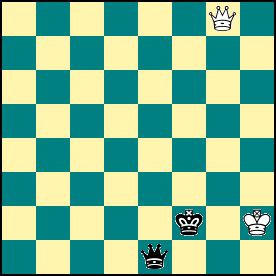 Well, a draw isn’t the result we wanted. Let’s try with the g-pawn, so White’s king is around to hinder Black from promoting:

Why doesn’t White play e5 here? Because after 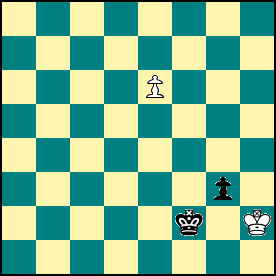 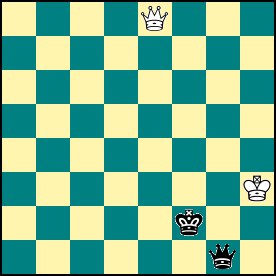 Black to move (analysis after 6 e8=Q)

So after 2 Kh3 play will proceed

Or the more subtle

OK, we’ve established that starting with a pawn advance just draws for White, so what’s left to try? How about protecting the g-pawn and going after Black’s pawn?

Suppose Black goes after the e-pawn: 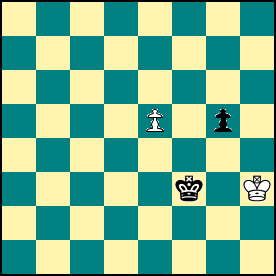 So instead, Black keeps his options open with 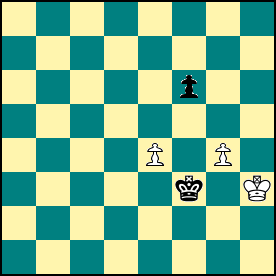 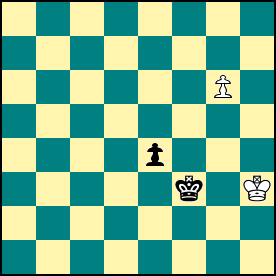 Black to move (analysis after 4 g6)

White does no better with 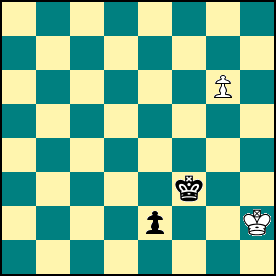 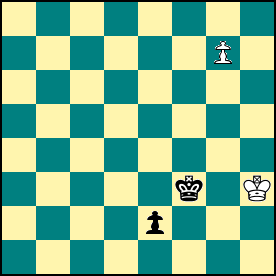 We’ve tried every other legal move for White. Of course Kh1 is ridiculous, probably loses, but we have to say we at least tried it: 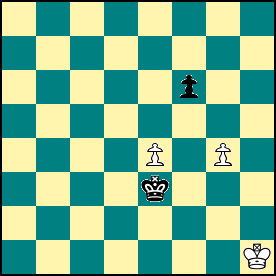 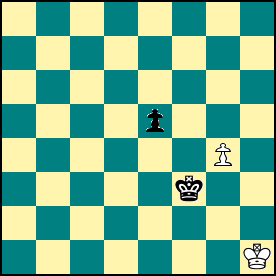 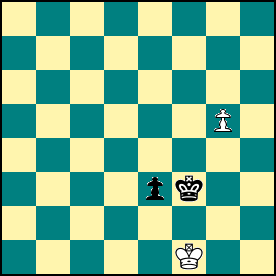 Black to move (analysis after 5 Kf1) 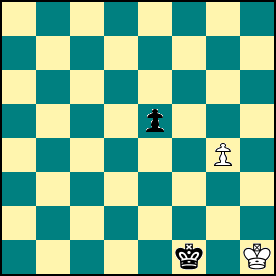 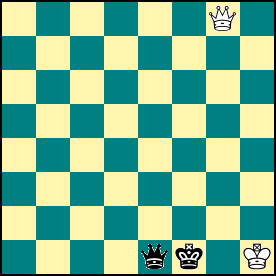 The above two variations are why Black played 1 ... Ke3. 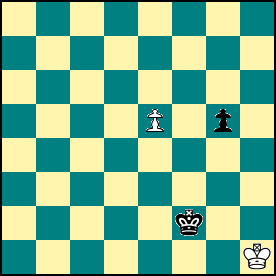 White will get his queen, but Black will mate him. 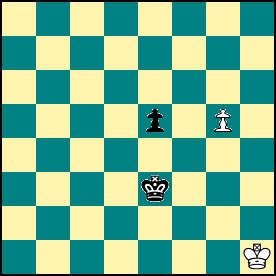 Now White is ahead in the pawn race. 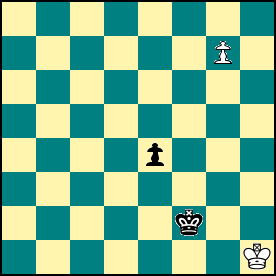 This study was composed by Harold van der Heijden in 2003. In describing this study, he says “[GM Artur Yusupov] told me then that he often used my endgame study database for training purposes ... I challenged him: ‘Mr. Yusupov, can you solve this study?’. He glanced over the position for about ten seconds and said: ‘Kh1 and Qg2 mate’ and shook my hand.”

This quotation and van der Heijden’s analysis can be found at http://en.chessbase.com/post/endgame-study-solving-is-fun-for-everybody.