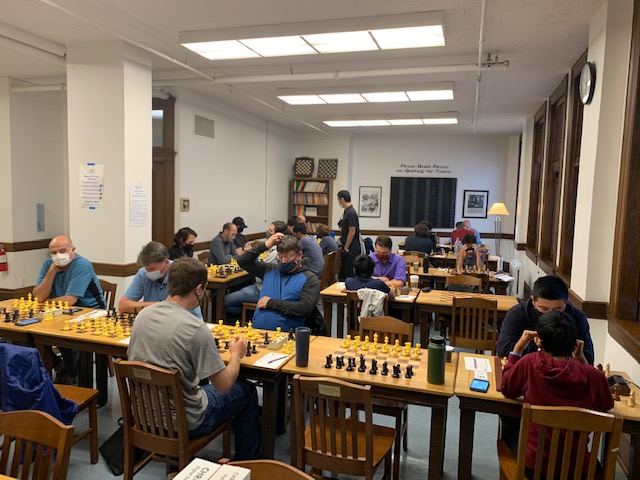 The TNM concluded with a tight battle for 2nd place, as FM Kyron Griffith had already wrapped up a clear first. IM Elliott Winslow defeated Ako Heidari on board 1 to take his share of 2nd place with 4/5. Theo Biyiasas inched closer to master status (2200) with his win over Gary Harris, also netting him a share of 2nd place. Nicholas Weng also tied for 2nd after his last round defeat of Max Hao. 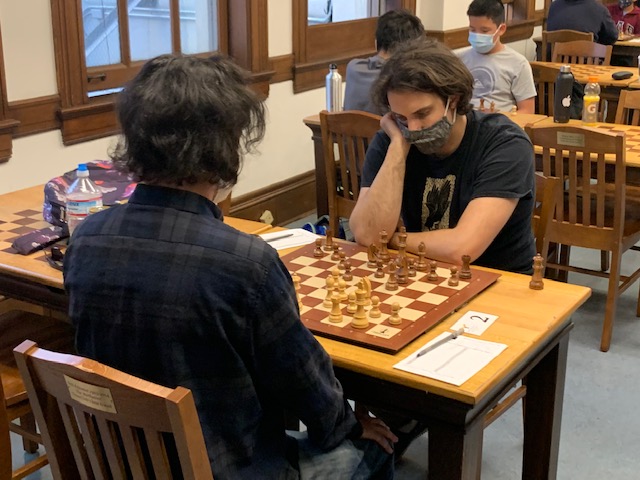 Theo Biyiasas got a decisive result in the final round to share 2nd place along with IM Elliott Winslow and Nicholas Weng.

In the under 1600 section, Joel Carron came from behind in the final round, defeating previously unbeaten Leon Quin to pass him up and take clear first place with 4.5/5. Four players tied for second place, including Quin, Paul Henry Reed, Andrew Imbens, and Andrew Ballantyne. 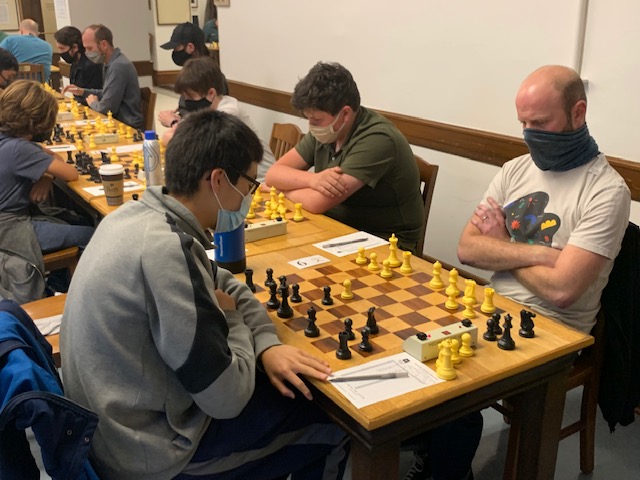 Congratulations to all the participants for supporting the Mechanics' Institute and the return to live chess! We look forward to the next TNM starting July 13, 7SS in 3 sections, FIDE and USCF rated. For details, please click HERE.

Here are some games from the final round, annotated by GM Nick de Firmian

The 20th IM William Addison Memorial exceeded expectations, with 72 players registered in this four-round USCF rated event. Chess players were clearly missing over-the-board play, and it showed on that Saturday afternoon. IM Josiah Stearman was the overall top seed, who participated in this event as the result of a flight cancellation to the Philadelphia International. It was a weekend well spent for him, as he took sole first place with a perfect score of 4/4. There was a three-way tie for 2nd between Austin Mei, Tanmay Khattar, and Leyton Ho, all with 3/4. 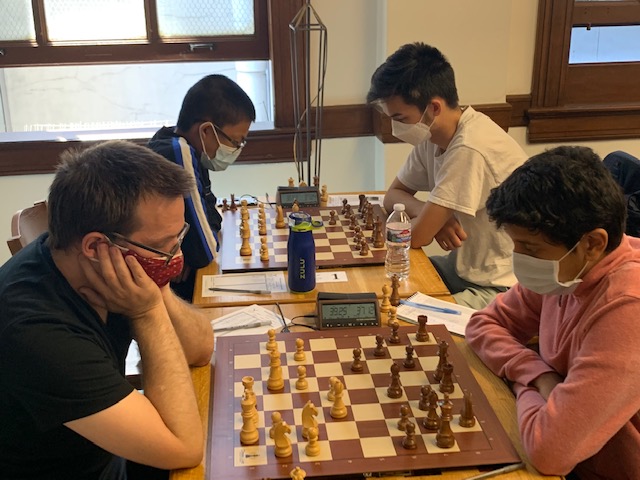 IM Josiah Stearman (white) takes on Austin Mei in round 3

In the under 1800 section, there were 46 players in total, with many new unrated players. It was great to see new players and perhaps likely the result of more people playing online during the pandemic and coming out to live play for the first time. Despite 46 players and four rounds of play, there was only a 2-way tie for 1st place, as Adam Stafford and Stephen Parsons remained perfect with 4/4 to share the top prize. Vian Yang and Prabhmehar Sodhi were right behind with 3.5/4. 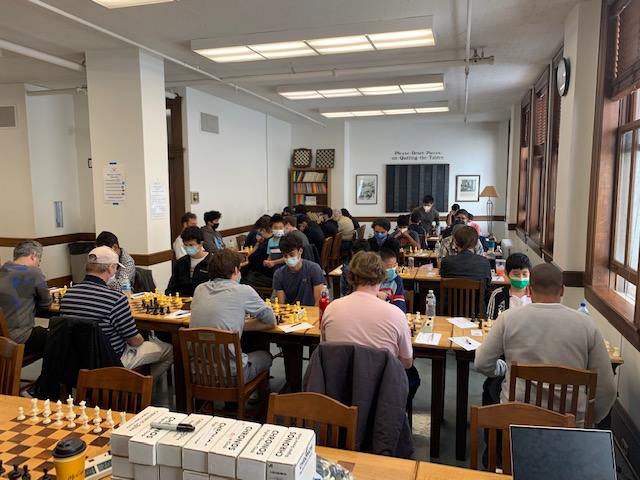 Join us for our next live weekend event, the 20th Charles Bagby Memorial on Sunday July 18, details can be found by clicking HERE.

The Thursday Night Marathon finished rounds 3&4, with GM Alex Lenderman taking two half-point byes as he is playing the World Open in Philadelphia. The action was in high gear however, and GM Gadir Guseinov showed again just how strong a player he is, quickly defeating two very strong players: FM Max Gedajlovic and IM Bala Chandra Dhulipalla. Only two players remain with perfect scores after four rounds, as Sina Mohammadi joins Guseinov in perfection after he defeated IM Elliott Winslow in round 4, taking advantage of a blunder by Winslow in time pressure, in a position where Winslow went from slightly better to losing.

The action game of the evening came in round 3 between IM Dhulipalla and Austin Mei. Possibilities galore in this game, and GM Nick de Firmian has annotated the game on short notice for our readers entertainment!

To watch the broadcast of the evenings rounds, please click here: https://www.youtube.com/watch?v=Pfm_j86EG1k

Here are the standings going into next week 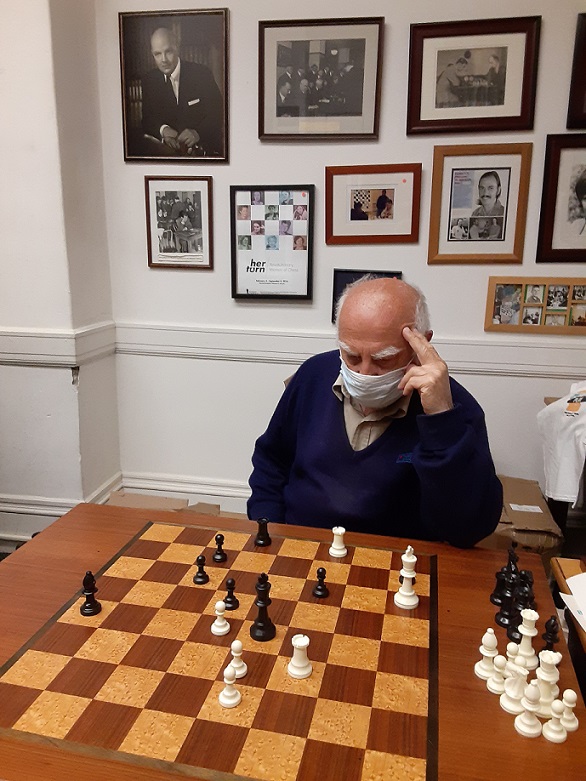 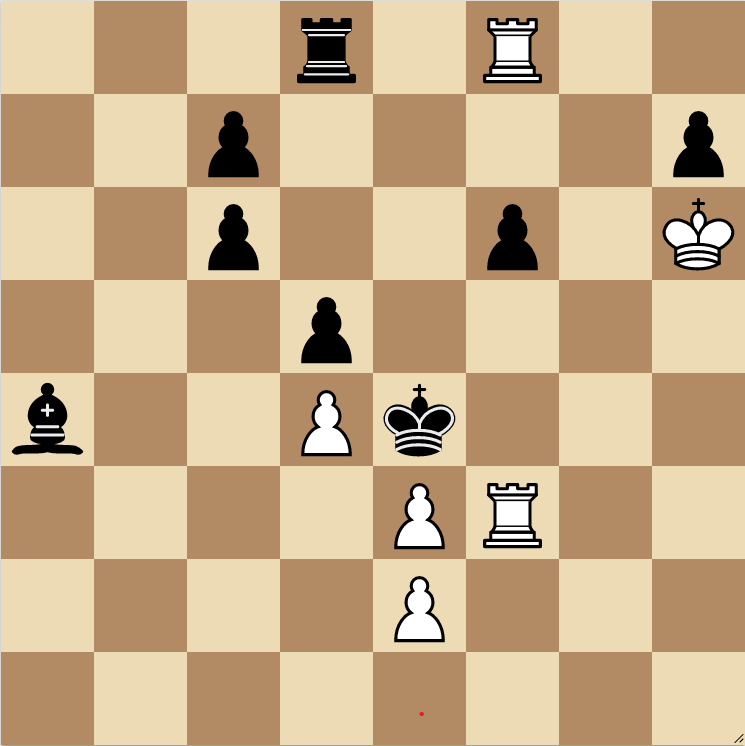 Vassily Smyslov was Botvinnik’s next challenger, after decisively winning the Zurich 1953 Candidates Tournament - two points ahead of David Bronstein.

Bronstein’s book of that tournament is considered one of the all-time great chess books.

Once again Botvinnik escaped by the skin of his teeth, retaining the title in a drawn match of +7 -7 =10.

The games were sharp and interesting, and at one point down the middle there were eight decisive results in a row! 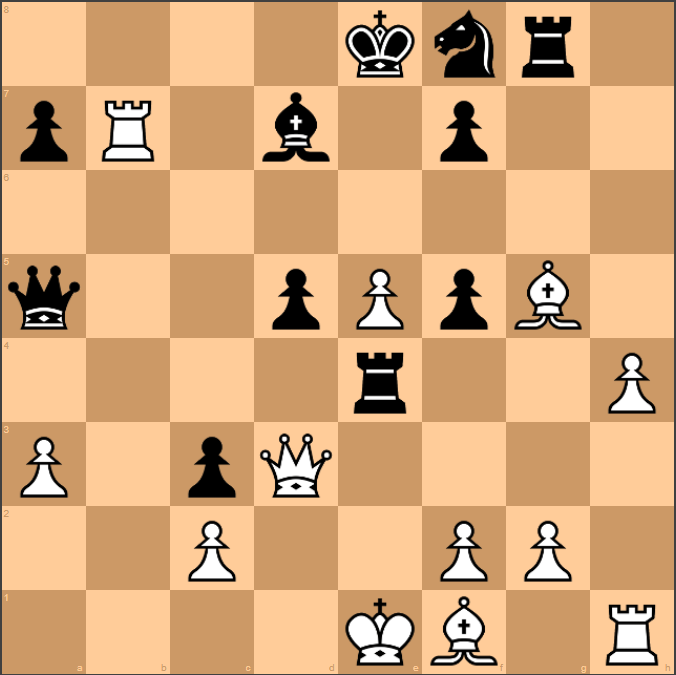 White moves. How do you deal with this rook check? 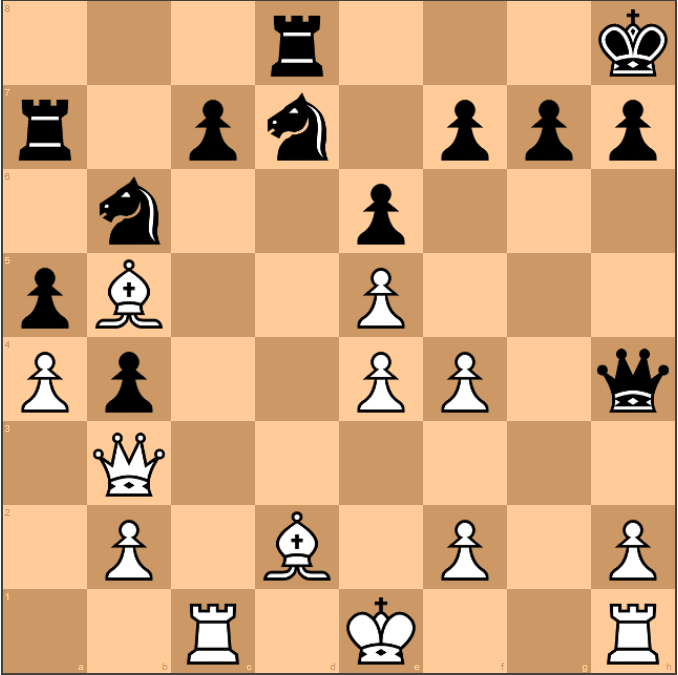 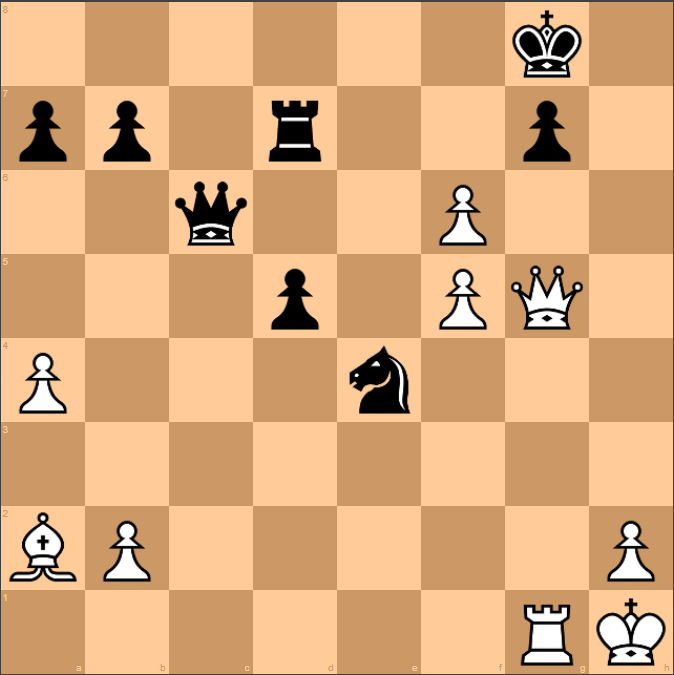 White moves. When all else fails… 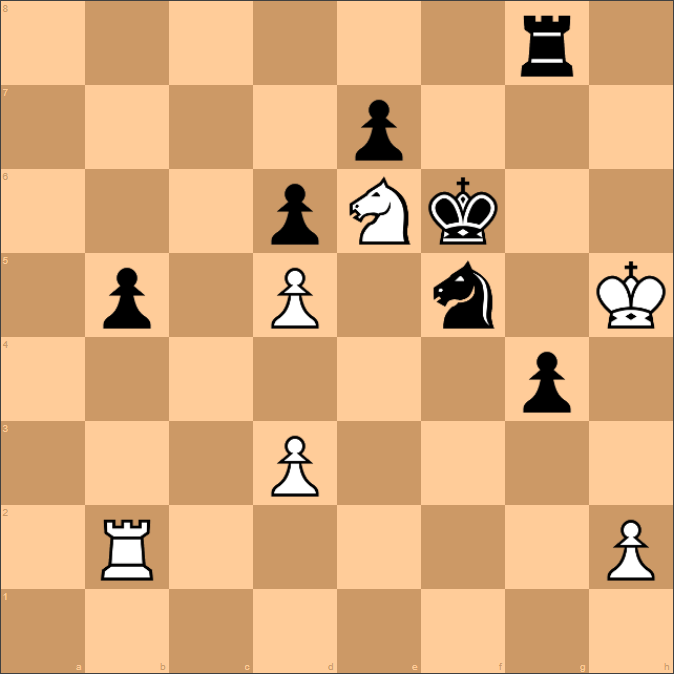 White resigned, but why? What happens after 1.Rxb5? 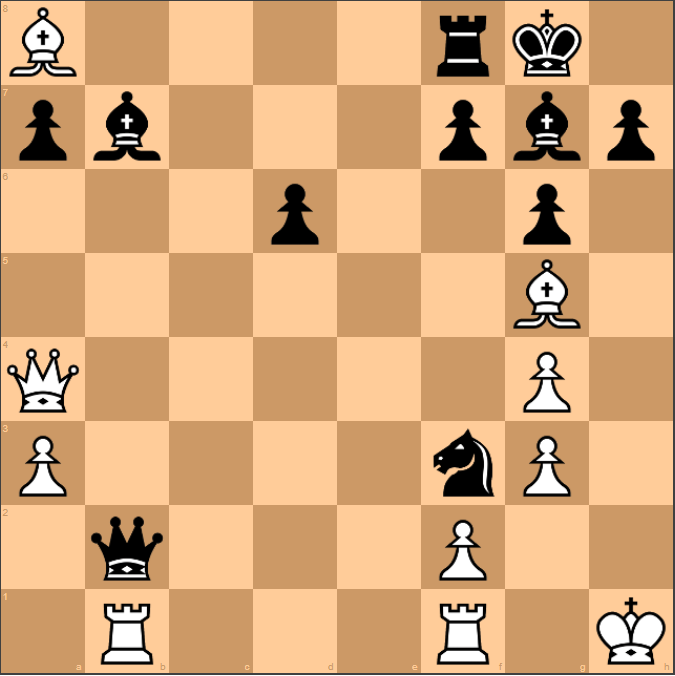 Black moves. 1…Qe2? Or something else? 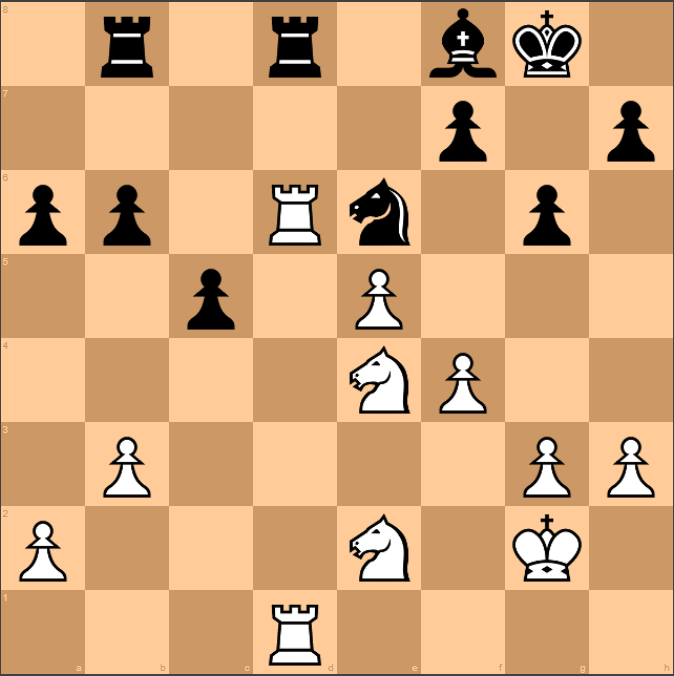 White moves. Win a little something.

So Good! So Nice! So Wesley Fabulous!

Like the lyrics to the famous James Brown song “I Got You,” we have reason to celebrate. Chess in America has the strongest top players we have ever had, with Caruana, Dominguez, Nakamura and new arrival Aronian in the top 20, Not to mention the talented young 2700 plus players Sam Shankland and Jeffery Xiong. The American player who is making the biggest splash though is the US Champion, Wesley So.

The latest show from So was total domination of the world’s top players at the Chess Tour in Paris. The star-studded field included his great rivals Fabiano Caruana (#2 rating in the world), challenger Ian Nempomniachtchi, MVL, young superstar Alireza Firoujza, Aronian and even Vladimir Kramnik.  Here Wesley gave anther World Champion style performance. He finishing a remarkable two and a half points ahead of the field. This is reminiscent of Alekhine in San Remo 1930. Yet we must also remember that So is the only player who evenly trades blows with Carlsen on a regular basis - winning these online matches against the champ as often as he loses.

The rules for making a challenge to the World Championship would have worked well for Wesley in the 1930s when Alekhine was the champion. His string of victories would gain the attention of a sponsor and thus he could directly challenge the champ to a match with the appropriate purse.  The hard fact of the chess world today is that even with all these tournament victories Wesley will have a difficult time getting a challenge match.  He must go through the official FIDE system, and hence first he must qualify into the 2022 Candidates Tournament when there are only a couple of routes available. No player qualifies on rating anymore, so Wesley must finish first or second in the World Cup or FIDE Grand Prix just to get a spot in the eight player Candidates in 2022.  It is a hard job winning the Candidates Tournament even if you get there as form and luck have a lot to do with it. Still, one should just tune into James Brown – So Good! So Nice! (Good luck Wesley!)

Young Firouzja is the most promising teenager on the planet. Will he be like Bobby Fischer or Kasparov? That remains to be seen. Just now he seems to be learning from the very best and not yet their equal. 1.d4 Nf6 2.Bg5 The Trompowsky Opening is as good as most. 2...d5 3.e3 c5! An exclamation mark for aggression. Typical of So. 4.Bxf6 gxf6 5.dxc5