If you watch it, you should watch it with other players and try to find moves, like it was before. Now on many sites you watch together with the computer and the pleasure is gone.

—Boris Gelfand, on watching games broadcast live on the Internet.

From round 4 of the Leighton Allen Tuesday Night Marathon:

Grandmaster Timur Gareev will be the special guest lecturer on Tuesday, September 1. His talk, which will go from 5:15 to 6:15 pm, is free to all.

The Mechanics’ will use the March 2015 rating list. The maximum lineup allowed is an average of 2400.75 for the four players competing each week. The ratings in parenthesis are current as of August 2015. All players rated over 2600 USCF, like Daniel Naroditsky, count as 2600 for the rating average.

Several of the Memorial Day Classic/Lina Grumette Memorials held in Los Angeles in the late 1980s/early 1990s had celebrity chess tournaments in which (primarily) Hollywood B list actors and actresses (think Erik Estrada of CHiPs fame) competed. The instances in which real stars have competed in U.S.C.F. tournaments under their own name are rare.

One who did was the Canadian singer-songwriter and painter Joni Mitchell, who played part of the 1972 American Open, earning a rating of 1133 for five games (source Chess Life and Review January 1973). This was the American Open where Bobby Fischer made a brief appearance, and chess was extremely popular in the United States.

San Francisco born Walter Tevis, the author of six novels, three of which were made into movies (The Hustler, The Color Of Money and The Man Who Fell To Earth) was a serious tournament player. Those who read The Queen’s Gambit might guess he was well-acquainted with the game, and they would be right.

During his time teaching at Ohio University, Tevis played in numerous U.S.C.F. tournaments between 1973 and 1978. Chess Dryad’s Kerry Lawless has found the following activity for him. The USCF rating supplements are the source unless otherwise indicated.

Tevis wrote about his experience playing in the 1974 National Open for The Atlantic Monthly (October 1974). Unfortunately the five-page article, which features three diagrams (likely the first and only time in the history of The Atlantic Monthly), doesn’t appear to be available online.

Tevis writes about the top players in the event, especially Walter Browne and his game with a master by the last name of Fletcher, but he also gives detailed descriptions of his own games that reveal he took his chess seriously but with a dose of humor.

Typical is the following paragraph near the end of the article:

Two days later I’ve lost four chess games and fifty dollars. I’ve been beaten by a boy from California, a blackjack dealer from the hotel (with a rating of 1580), and a tight-lipped, pretty girl named Mary Lasher, who forced me to resign after the eleventh move. The fifty went to roulette. I am making excuses to myself like crazy: I have jet lag; I have an article to worry about writing; chess isn’t all there is to life. But it hurts like hell. Especially that girl. She wouldn’t even let me smoke!

Lasher, who would have been roughly in her mid-twenties when the game was played, is remembered in the chess world as a former editor of Northwest Chess and the translator of Averbakh’s Pawn Endings and Bishop Endings. The later were part of Batsford’s great endgame series, published in hardback about the time the article by Tevis was written.

Chess Evolution, a highly-respected weekly publication http://www.chess-newsletter.com/, produced by Arkadij Naiditsch and Csaba Balogh with support from fellow Grandmasters Etienne Bacrot and Kamil Miton, recently featured two games of Daniel Naroditsky from the Politiken Cup held a few weeks ago. The annotator, French 2700 rated Etienne Bacrot, notes that Daniel is currently the tenth-rated player in the World Under 21. We published the first game in Newsletter #716. Here is the second, with abridged notes.

11.Nh3 with a later f4 is also a possibility, but I don’t think it can bring an advantage.

Looks tempting, but White is not fast enough to get enough compensation.

Fred Wilson, the noted chess historian and book seller (http://www.fredwilsonchess.com/), writes about his quest to reach 2200 before he turns 70 (Fred is 69 and currently rated 2156).

I just had another mediocre tournament yesterday (7/12/15) in New Jersey, playing in a four round, G/60 (increment 10 seconds, ugh!), at Magesh Panchanathan’s nice place in Edison, NJ (very good playing conditions). Although I only scored 2½ points, and played very poorly in my first two games, I did play the following instructive trifle—almost a miniature:

Exchanging queens is the best way to disprove this plan.

Develop all your pieces!

He missed my next move, although he probably has insoluble develop problems. Maybe he thought I was just blundering a pawn like in my first two games in this tournament where I was giving them away right and left!

And after a 15–20 minute think he accepted the fact that he had to lose a piece to stop mate.

Andy Ansel sends along the following “lost” game, one of many played between Walter Browne and John Grefe.

And another by John Grefe, played at the age of 17.

In this study, Black’s knight is separated from his king. Can he get back safely to draw? 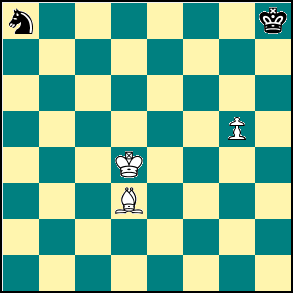 In order to win, White must play precisely. Each of his first four moves is the only one (☐) preventing Black from drawing. 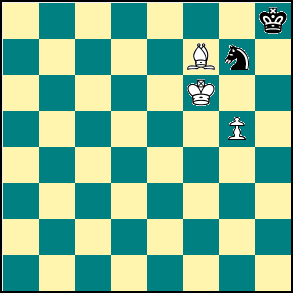 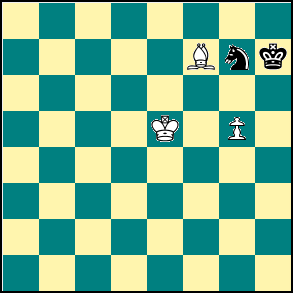 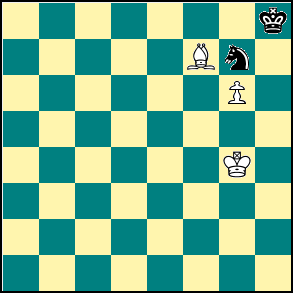 Black can only move the knight, which is promptly captured, and you know the rest.