He is not the most talented or the strongest player but certainly the most inconvenient player in the world! His ambition is not to play actively, but to paralyze his opponent’s intentions. I personally did not succeed in adapting to his style, mainly because one is not able to change one’s play easily at my age.

The 15th Annual Howard Donnelly Memorial G/45 will be held this Saturday, September 12 from 10 am to 7 pm at the Mechanics’ Institute Chess Club.

National Master Uyanga Byambaa has defeated top seeds National Master James Critelli (USCF 2376) and International Master Elliott Winslow (USCF 2328) in rounds 5 and 6 of the Leighton Allen Tuesday Night Marathon and leads the 96-player field with a score of 5½ from 6 (round one half-point bye). Critelli and Experts Bryon Doyle and Josiah Stearman are tied for second with 5 points.

From round 6 of the Leighton Allen Tuesday Night Marathon:

The Mechanics’ entry in the US Chess League is in first place after three rounds, having just defeated the Rio Grande Ospreys 2½–1½. Senior Master Cameron Wheeler and National Master Rayan Tagizadeh lead the way, winning their games.

The Wednesday Night Blitz will be held every week until Thanksgiving.

Daniel Naroditsky and Christian-Ioan Chirila tied for first in the 2015 CalChess State Championship, held September 5–7 in Burlingame. The two Grandmasters, who never met, were both undefeated with 5–1 scores, but the real story of the event was the performance of Rayan Taghizahdeh. The 13-year-old National Master started the event rated 2231 and, after beating Grandmaster Jesse Kraai, Senior Master Konstantin Kavutskiy and FIDE Master Vignesh Panchanatham, as well as drawing with Chirila, he played and lost to Naroditsky in the last round. Rayan’s new rating is 2301.

Tying for third at 4½ in the 239-player event were Rayan, Grandmaster Georgi Margvelashvili and Senior Master Cameron Wheeler, who is now playing consistently at 2450 USCF, and should be an International Master in the next year.

The team of Tom Langland, Richard Kopecke, John McCumiskey and Judit Sztaray organized and directed this event for Cal Chess, the governing body for chess in Northern California.

2) Walter Browne annotates some of his last games – Part Two

One of the last emails we received from Walter was on June 4, in which he included two games annotated Chess Informant style (i.e. no words). We have added some text for readability. The first game appeared in Newsletter #718. As far as we know the following game was the last Walter annotated.

An amazing game! Similar structure on the kingside as in Lombardy–Fischer, Monte Carlo 1967.

Walter was loyal to his opening choices. Rising up through the ranks he played 1.e4, and met 1.e4 and 1.d4 with the Najdorf Sicilian and Kings Indian respectively. He answered 1.Nf3 and 1.c4 with 1…c5, followed by a Kingside fianchetto. Yes, exactly as Bobby did.

Later, when Walter became a strong Grandmaster. he made some changes. He stayed with the Najdorf but switched to playing 1.d4 and defended against it with the Nimzo/Queens Indian. He also started meeting 1.Nf3/2.c4 with the Hedgehog, but against 1.c4 favored a reversed Closed Sicilian, with which he won many nice games.

In the mid-2000s, finding it hard to gain an advantage against the Slav/Semi-Slav/QGA/Queen’s Gambit Declined, he switched back to 1.e4 and replaced his beloved Najdorf with the Sveshnikov.

Going into the final Grand Chess Tour event Veselin Topalov continues to lead in the overall standings, but his pursuers have breathing down his neck after the end of the second event in St. Louis.

Topalov has 17 points, with Hikaru Nakamura second with 16, followed by Levon Aronian on 15 points, Magnus Carlsen on 14 and Anish Giri at 13.

International Master Eric Tangborn has a new chess blog which emphasizes book reviews. Go to http://chessbooks4tablets.appspot.com/ to check it out.

4) The fall of the Soviet chess armada

During the recent Sinquefield Cup Garry Kasparov was interviewed by commentators Jennifer Shahade and Yasser Seirawan, and had interesting things to say about the development of chess talent in 2015. While Kasparov is undoubtedly right that Russia is no longer dominating the game the way the Soviet Union did—note that it has a much smaller population—a quick glance at the list of the top ten juniors (under 21) in the world shows it is still producing many promising young talents. What is surprising is that Ukraine has no players on the list, and China only one.

Of course making this list is no guarantee that a player will reach 2700 (Wei Yi being the exception). Arguably the biggest challenge facing American chess today is the lack of appropriate tournaments for players rated over 2625 FIDE who are trying to reach 2700. Except for the U.S. Championship and the Millionaire Open there are none. Such players will find themselves continually playing down (probably 90 percent of the time) playing in other US events and elsewhere (Gibralter and Qatar Masters being two exceptions). One place to continually face first-rate opposition (players rated in the top 100 in the world) is various chess leagues in Europe and Asia, but this generally requires the individual to live outside the United States.

GK: In the Soviet Union, chess was a very important factor. A social, cultural, and also political factor. There was a huge investment by the communist state to make sure the great talents were found. That’s why there was the network… Not chess and education, let’s not confuse these two things, but to make sure the talent, from almost anywhere could be noticed and eventually brought into the system, and given the opportunity to realize his or her potential. It is gone with the collapse of the Soviet Union, but it’s happening now in other countries. (Jennifer and Yasser gesture to indicate the United States) Absolutely.

GK: But China is more like the Soviet model. Here in America it’s different, but the game is gaining ground. (…) Now, chess has become a factor. So parents are looking at chess as a potential opportunity for their kids, which means more kids, especially from the Asian families, where the parents are looking for every chance for their kids. This is a country with 310 million people, so there is so much talent, and it creates big opportunity. The moment chess is being considered by 5% of this population…

Kasparov noted that England, a force in international chess, currently does not even have an International Master under 18.

GK: Yes, the advantage of the Soviet Union was that millions of kids went through the network. If you look at the former Soviet Union, one of the most successful countries was Armenia with only 3.5 million people because chess was mandatory in the schools for a few years. And Armenia with such a small population won three Chess Olympiads, Ukraine won two…. And Russia won none since I left the Russian team. So it just tells you that what’s important is not having a massive population like China, it’s about the number of kids that are interested in the game, and parents that would love their kids to have this extra opportunity.

In this study, it looks as if White has all the winning chances. Unless Black can capture the pawn, and draw with a minor piece against a rook. Or maybe...use your imagination. 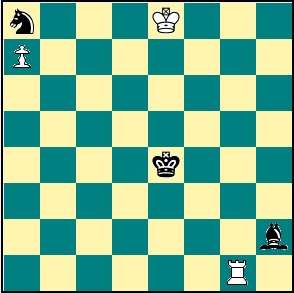 White can try either of two ways to win. He can promote the pawn, or win one minor piece and hope to prevail in the rook-vs-minor-piece endgame, although rook vs bishop and rook vs knight are usually drawn. 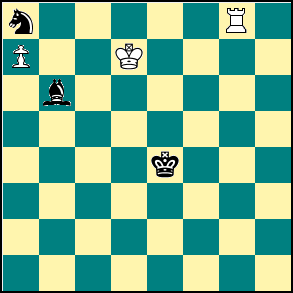 3 ... Kd5 4 Rxa8+- is similar to the position in the following variation, except Black must move, and give up the opposition. 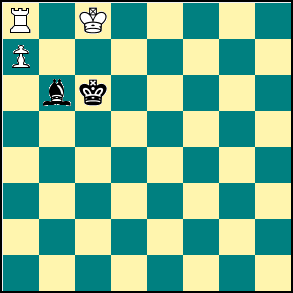 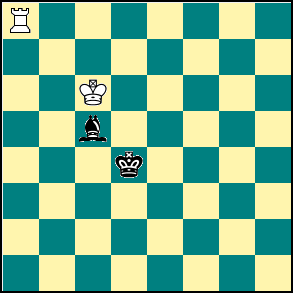 This is another study by Genrikh Kasparyan, from Shakhmaty v SSSR (“Chess in the USSR”), 1954.